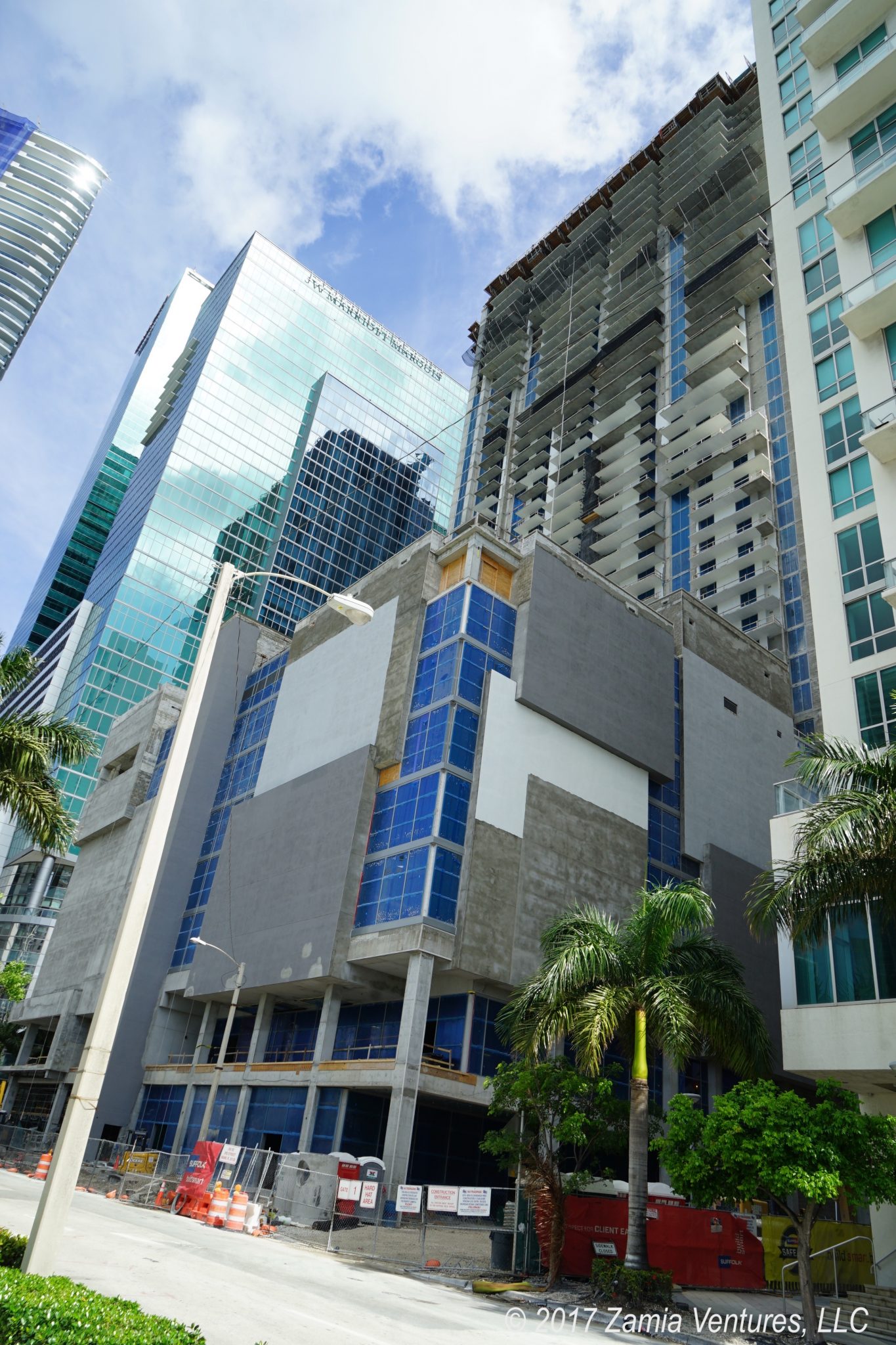 The origins of Miami’s nickname, the Magic City, are a little murky, but it appears to be rooted in classic Chamber of Commerce boosterism. The city grew dramatically in the years after the arrival of the railroad in 1896, with the population blossoming from a few dozen people in the pre-railroad era to 444 citizens voting for incorporation in 1896. The vision of Julia Tuttle was quickly fulfilled and a city appeared at the mouth of Miami River, seemingly out of nowhere. The U.S. census reported 42,753 residents of Dade County in 1920, representing a hundred-fold growth explosion in less than a generation. By 1925, a Florida state census found that the county’s population had more than doubled again to 111,332.

This sort of visible overnight growth is occasionally seen in the natural world in mushrooms and bamboo. But apparently the city’s promoters did not consider “Incredibly Fungal” or “You Won’t Believe This Grass” to be compelling slogans for the city’s seemingly miraculous development and bright future. So “The Magic City” it was.

The growth in population in the city’s early years was accompanied by a similarly explosive increase in economic activity, especially property development. The epic building booms of Miami’s early years quickly transformed the wilderness — obliterating the pre-existing hardwood hammocks in the process, leaving only a few remnants at Simpson Park and The Barnacle. The post-1926 hurricane rebuilding phase on the beach led to what we now call the Art Deco National Historic District. These periods of frenzied activity were characterized by wild speculation, spectacular profits (and losses), and all-around chaos.

Skipping over about a century of activity, including the transformative arrival of large numbers of Cuban immigrants followed by immigrants from all over Latin America, Miami has been experiencing a second great building boom since the early 2000s. In 2003-2005 the skyline featured more cranes than completed buildings. The speculative frenzy was fed by breathless “crane watch” coverage, along with economic booms in Brazil and other parts of Latin America. In just a few short years Miami changed from a town where few iconic skyscrapers dominated the skyline to a dense urban core with dozens of huge buildings. Remember this?

The Great Recession put a pause on new development, but only temporarily. The last five years have featured another significant round of construction, with the downtown and Brickell areas once again being a focal point. Miami’s Downtown Development Authority created a excellent video in 2015 showing the buildings that were existing, under construction and planned for the downtown core. The increase in density from these new buildings is pretty remarkable, particularly because the newly constructed high rise towers — filled with offices, condominiums, retail / restaurants, and rental apartments — are generally replacing small 1-2 story buildings. Much like the early pioneers, I find it exciting to have a front row seat to the birth of a completely new city. My daily commute to work involves walking by the site of one of these new projects, which will bring a 12-screen cinema, tens of thousands of square feet of retail and restaurants, and about 200 luxury apartments to my immediate vicinity. 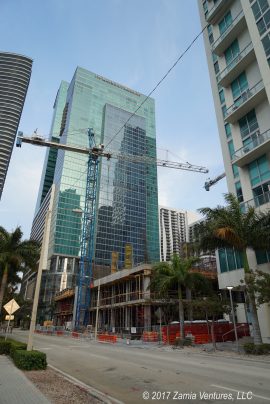 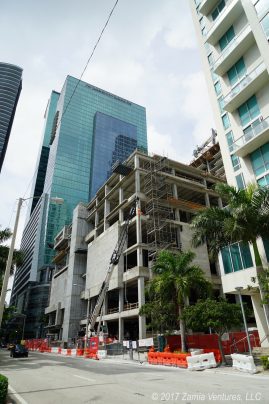 Progress on the new building: October 2016 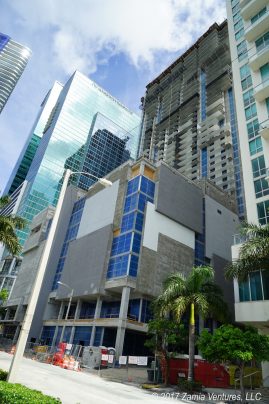 And like the early great building booms, these latest rounds have featured a notable lack of advance planning. The immediate consequences of urban construction — closed sidewalks, partially closed streets, large construction equipment driving on city streets, daily deliveries of materials including cement — are predictable and understandable side effects of creating a massive edifice in the middle of a busy city. The resulting delays may be frustrating, but they are temporary.

The larger issue with the current growth is the apparent absence of long-term planning. A vibrant and populous city is naturally going to face certain challenges, and Miami has not done a particularly good job of anticipating these.

First, Miami has utterly failed to promote a transition from car-based transportation to other modes of transportation in the downtown core. As a person who has to navigate the maze of relatively narrow one-way streets on a regular basis — both on foot any by car — I can confirm that there are far too many curb cuts and new buildings are oriented far too strongly toward drivers.

The streets of downtown Miami are at their maximum width. They cannot be widened without shearing away the sides of large buildings. There is a mathematical limit to the number of vehicles that can fit on these streets. Yet there does not seem to be any pressure, regulatory or commercial, to construct buildings with less parking. So the result is that virtually every new residential structure in downtown Miami is built with more than one parking space per unit, and each office or retail structure has at least three parking spaces per 1,000 square feet of usable space. The result on the ground is complete and utter gridlock on the streets in the downtown area during morning and evening rush hours, complete with heavy doses of road rage. The singular focus on vehicles means that in some cases it can be hard for pedestrians to even find entrances to buildings, since they are disguised as parking garage entrances.

While I am an advocate — and frequent user — of Miami’s public transit, I have to admit it’s pretty limited. There is a fairly robust bus network, but there are just two rail lines, both basically running north and south, and a free people mover that operates in the small footprint of the downtown area. Moreover, traversing downtown Miami as a pedestrian means risking life and limb every time you cross a street.

Miami can do better.

In no particular order, here are some of my recommendations for moving away from the car-first attitude that seems to permeate the current thinking: 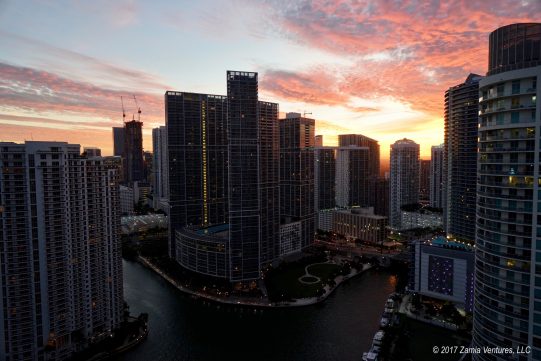 Sunset over Brickell on December 30. (Yes I am sort of cheating – December 31 just wasn’t as good!) 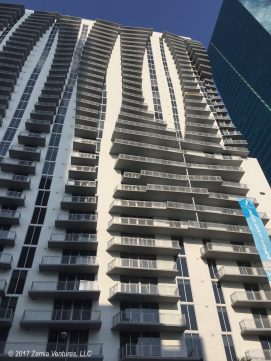 My other gripe with Miami planning is the absence of green space. We have a few large parks such as Bayfront Park (and some lame ones like Lummus Park), but in general downtown Miami does not have the lush tropical feel that one might expect. I think the main reason is a noticeable shortage of trees and shrubs.

Miami is HOT. Shade from trees is a great way to combat the sun and heat. Yet there do not appear to be any significant landscape requirements for downtown development projects. The result is that most new construction creates a giant concrete and glass box, fronted by a giant concrete sidewalk punctuated by a few spindly palm trees. And don’t get me started on the fact that all hedges in Miami are made of shrubs that are trimmed into squares, not the most natural shape for a plant.

Palms are beloved by developers because they are generally cheap and take up very little space, unlike a spreading shade tree. Without any accompanying understory shrubs, palms alone can’t deliver the succulent, rich, leafy feel of the tropics. (Standing by a tall palm has all the leafy appeal of standing next to a telephone pole.) They also provide very little shade and very little protection from the brutal heat that Miami enjoys for much of the year.

A great model for introducing natural elements into a city is the “pocket parks” that dot New York City. It would have been very easy for every square inch in Manhattan to be devoted to rentable space, but it’s my understanding that at some point in the 1980s the city government added public park requirements as a condition to approving new developments. The required parks were small, and didn’t significantly curtail the use of the property, but did mean that in order to win approval for a new tower of condominiums a developer would need to devote a portion of the private land to a public-accessible, landscaped area that would be maintained in perpetuity for public use. 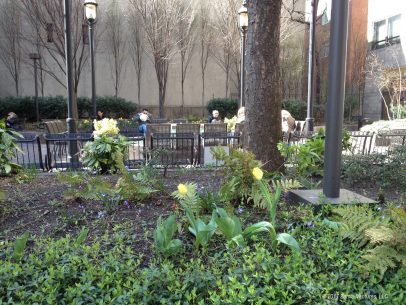 A pocket park in New York City, providing a welcome respite from the bustling city, just off Second Avenue. 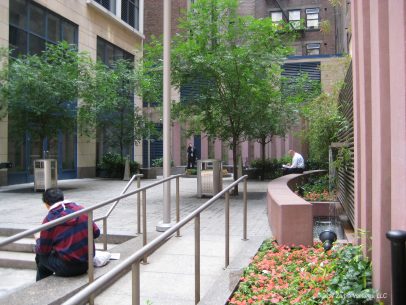 While New York City’s massive Central Park is certainly deserving of its fame and recognition — it’s a remarkable area with so many diverse recreation opportunities — the pocket parks are one of the things that make it possible for people to live in many areas of the city and not be overwhelmed by the sheer volume of concrete. I really wish Miami had introduced a similar set of requirements for the current wave of downtown development. Instead, we are rapidly approaching a state of near-total entombment in impermeable surfaces, with very few landscaped areas to break up the vast stretches of concrete and granite. My prediction is that this will eventually make properties that are close to Bayfront Park or the other few downtown parks particularly sought-after. In the meantime, I’ll get off my soapbox and continue to enjoy the spectacle of our rapidly-changing city!

1 thought on “The Magic City Reprise”