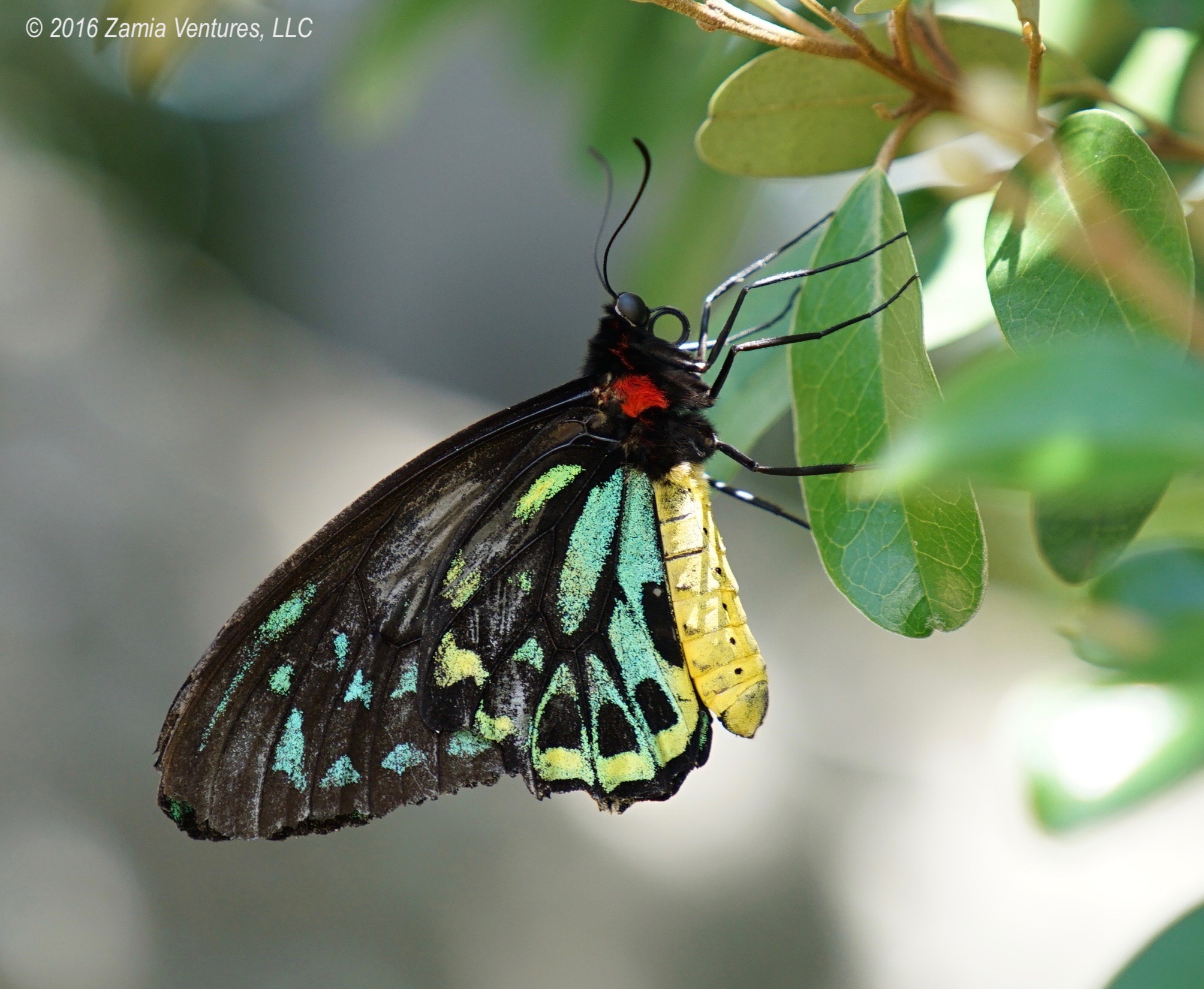 Outside of honeybees and perhaps ladybugs, most insects don’t get a lot of love, and the flying kind are particularly unwelcome.  (Termites, biting flies and roaches = blech!) The major exception is butterflies, which seem to be universally beloved.

Everyone loves butterflies, including us.

We found a South Florida destination devoted to butterflies that features an enormous aviary in which thousands of lepidopterans fly free, accompanied by charming little birds and, unexpectedly, piped in classical music.  We arrived at Butterfly World on a fairly sweltering summer day, and as we walked from the parking lot we were greeted by a loud rendition of the Dance of the Sugar Plum Fairy emitted by the flower beds in front of the entrance. My initial skepticism gave way to grudging acceptance and ultimately enjoyment of the pervasive soundtrack, but it definitely set the tone for further weirdness.

The butterflies in the gargantuan main aviary, which has several different areas, are in a constant state of motion. Now, I’ve spent plenty of time watching butterflies in the wild — especially the atalas that consumed our coontie — and while they are often in flight, butterflies typically rest for a time when they find a good location to feed or lay eggs. Not so with the residents of Butterfly World! For the most part, these critters are moving — fast. 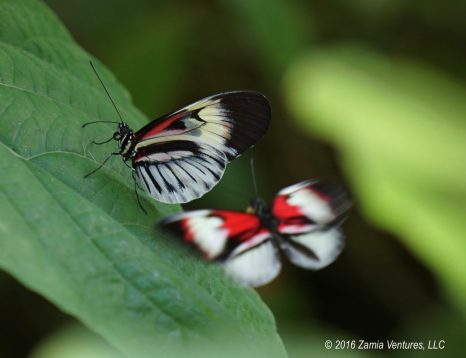 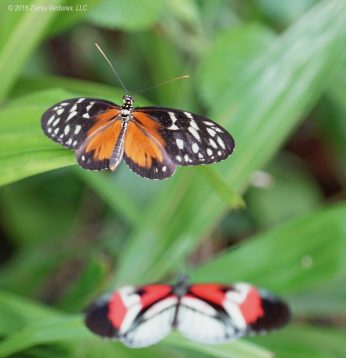 Another tiger longwing (I think) with a Heliconius burneyi (I think)

We figured it might be a result of butterflies being captive and fed, without the need for energy conservation. On the other hand, even wild butterflies typically live only a few weeks so they are not exactly focused on saving for retirement. We also thought that the incredible concentration of animals competing for food / territory / mating opportunities might make them more active. According to the website, Butterfly World generally has several thousand butterflies representing up to fifty species flying in the aviaries at any given time. There may also be a clue in the fact that the species of butterflies raised on site and released into the aviaries originate all over the world, and don’t naturally occupy the same geography. There were plenty of nicks in wings that could be the result of violent confrontations — and the mental image of butterfly gang fights is definitely worth contemplating.

Why were we forced to speculate about the unusual behavior? Because there was NO SIGNAGE! Butterfly World is not a typical science-oriented attraction, where visitors would receive plenty of information about the origins, habitat, roles in the ecosystem, and more about the species. Normal visitors would skim over it, but we would read it all! In this case, there just wasn’t much interpretive signage for us to dissect. 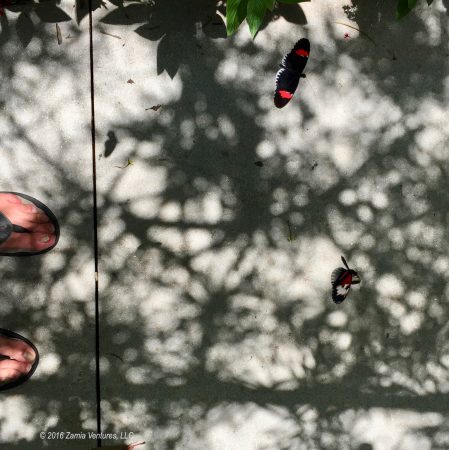 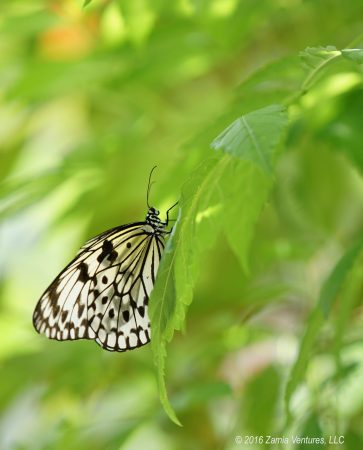 From reading on the website before our visit, I learned that the founder of Butterfly World developed some uniquely effective techniques for butterfly breeding, and that the organization is also involved in repopulating certain endangered species. We would have loved to learn more about that. The visit to the “laboratory” was essentially a window to a room with a bunch of butterfly breeding cages. Maybe if we took a tour we would have received more information.

Fortunately for Ken, I was able to provide some interesting discussion points thanks to recently hearing a fantastic Radiolab segment that delved into what scientists know about the mystery of the chrysalis. (Hint: not much.) Despite the lack of science information, we enjoyed watching the butterflies and small birds in the main aviary, and Ken was very patient as I tried to master new settings on my camera and chase after some subjects.

Butterflies are the main attraction at Butterfly World, but not the whole story. There are two additional aviaries filled with small colorful birds from the global tropics. Research after the fact revealed that these birds are, for the most part, commonly kept as pets. We basically had the chance to walk through enormous bird cages and see the tiny inhabitants without a cage separating us from them. It was fun for a photographer, though not particularly realistic. At least the music was relaxing. 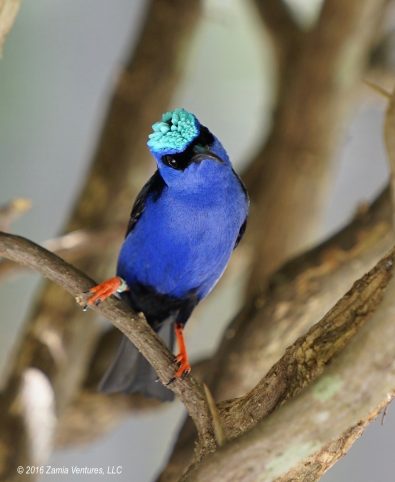 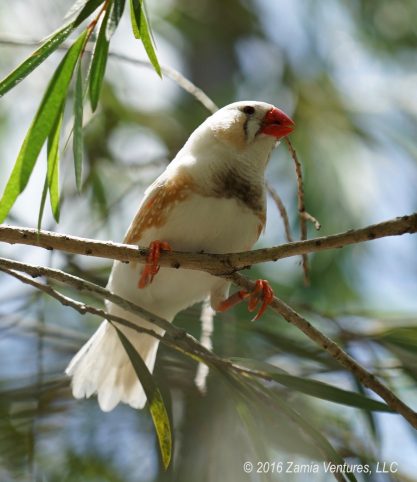 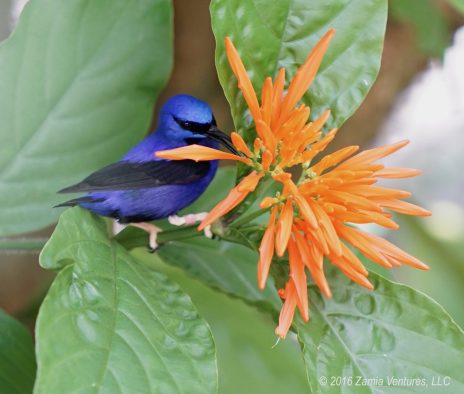 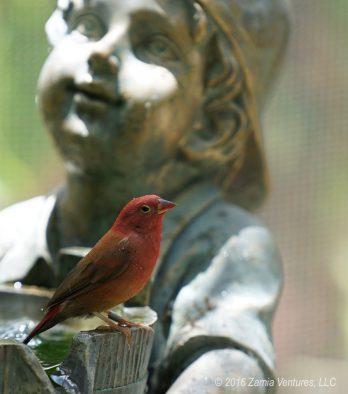 This tanager (?) says, “Ignore the creepy cement child behind me.”

Red legged honeycreeper with branches for scale – they are tiny! 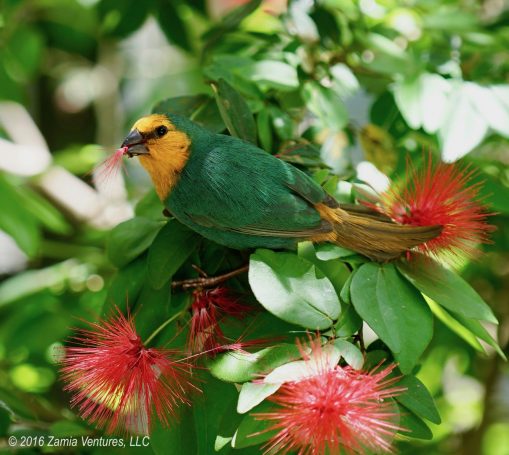 Some of the other attractions include a lorikeet encounter (we elected not to have these small parrots sit on our heads) and a small museum with mounted insects and some live specimens of insects and arachnids (mostly of the blech! variety).

The property also features a large collection of passion vines with a variety of showy flowers. The collection certainly fits in with the theme, since so many different species of butterflies rely on Passiflora species as larval food. There is also a nice garden center to purchase butterfly-friendly plants that flourish in South Florida. The gift shop offers just about every product ever made which features butterflies. 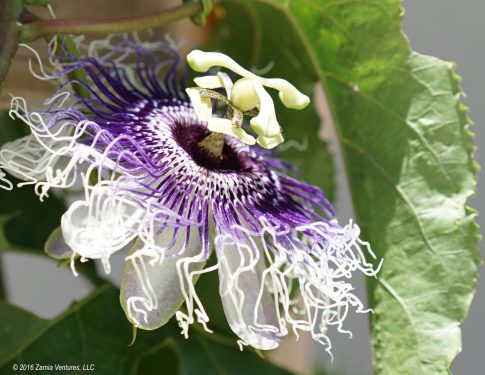 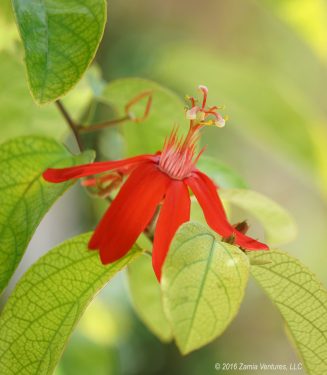 If you like a fantasia of beautiful butterflies, birds and flowers, accompanied by aggressively pleasant music, this is the place for you! It’s a little pricey given the extent of the attraction at close to $30 per person, so if you plan to visit try to pick up a coupon — they are available on the website or on flyers from hotel lobbies (which we used to save $4 pp).

Click on any of the images below to scroll through the gallery and see some photos I was able to capture despite the frenetic movement. Be warned that, thanks to the aforementioned lack of signage, most of the species identifications are guesswork. 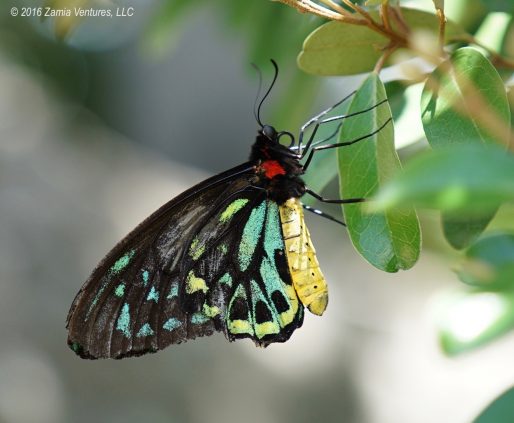 Queen Alexandra’s Birdwing (male) (Ornithoptera alexandrae). The female is the largest butterfly in the world. 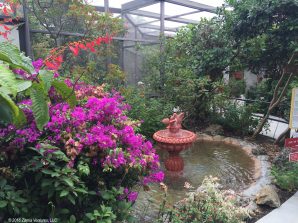 The butterfly aviary is packed with tropical plants. 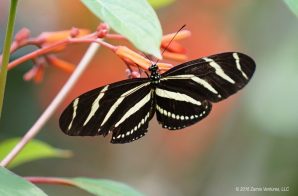 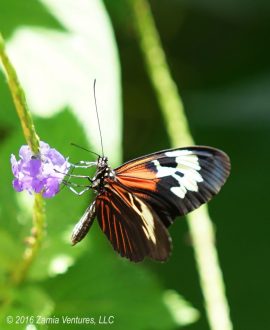 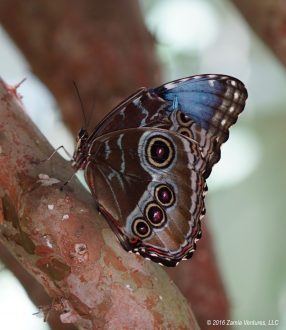 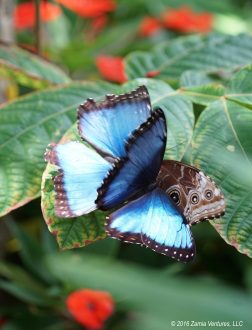