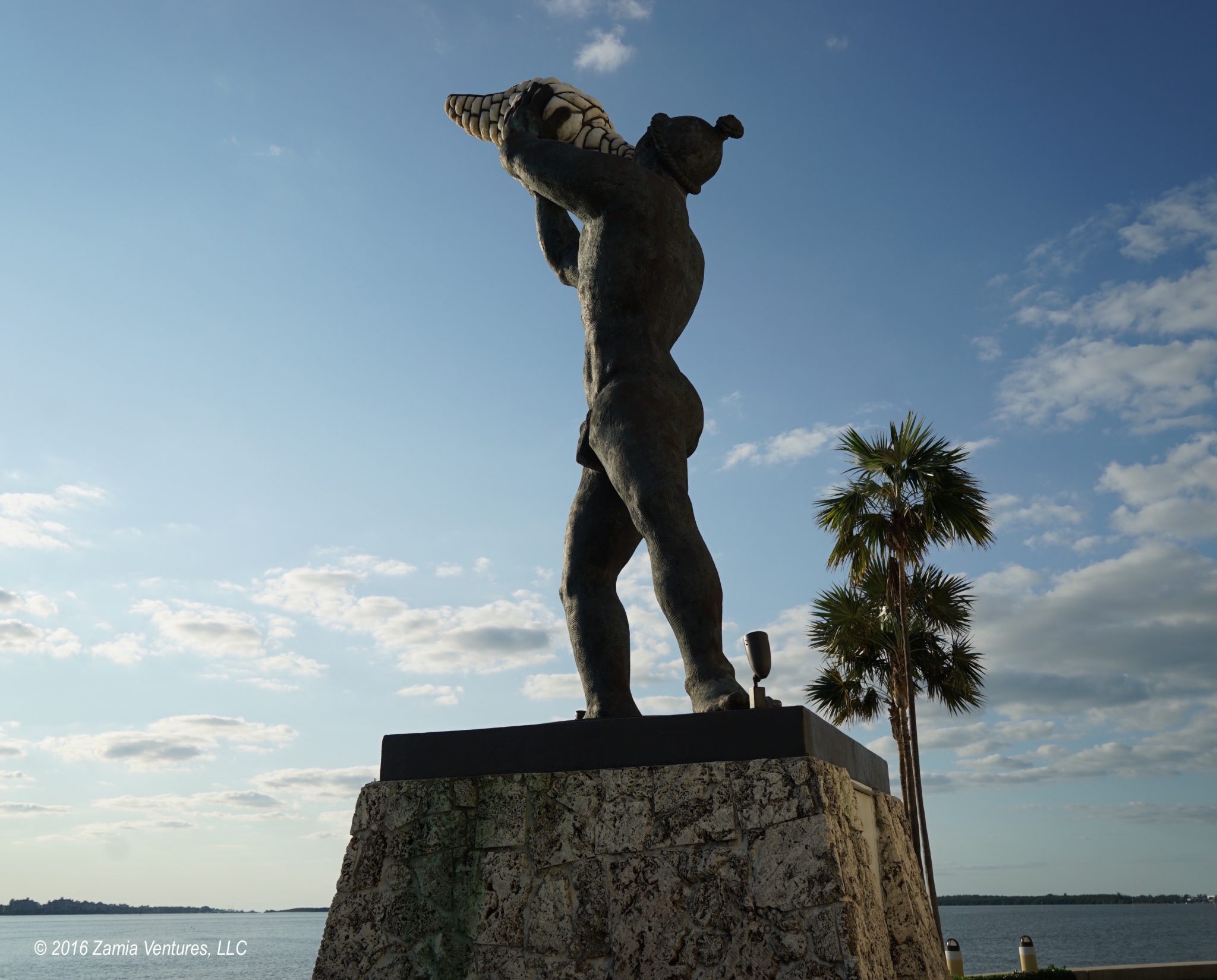 At first glance, the Miami Circle may seem to be one of the least interesting historical landmarks in downtown Miami. It quite literally consists of a series of holes in the ground, and is surrounded by sodded areas that serve as the main dog run for downtown Miami. It’s not readily visible to drivers on any major streets, and forget about directional signage. However, having heard rumors of immense controversy surrounding the seemingly lame site, I naturally wanted to learn more. Who can resist a good archaeological drama? Let’s get on with the questions.

It’s located on the south bank of Miami River, very close to the site of the home of the pioneering Brickell Family. The location is at the historic mouth of the river, and today is flanked by the Icon Brickell Condo / Viceroy Hotel project to the south and Brickell Ave (US1) to the west. Click here for a map.

The actual archaeological site has been covered over for preservation. Visitors today see only a circular walkway indicating the subterranean location of the mysterious circle. 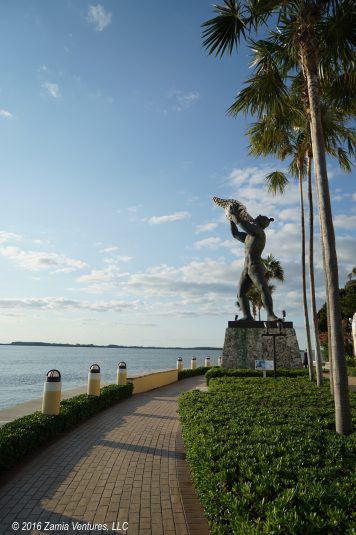 Monumental statue of a Tequesta man calling the ocean 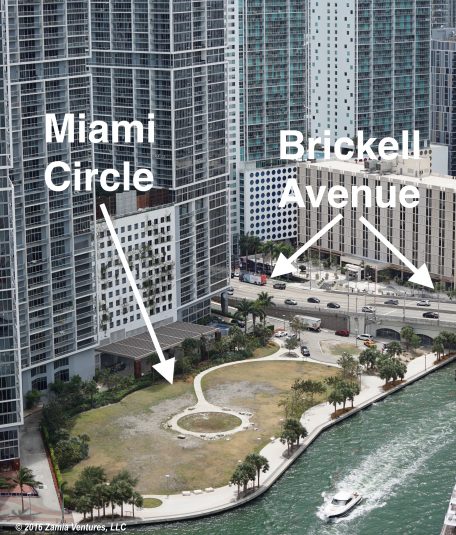 How was it found?

In 1998, a developer purchased the riverfront land with the intention to demolish the existing structures (the 1950s era Brickell Point Apartments) and replace them with a luxury condominium. As is customary prior to receipt of development permits, the developer conducted an archaeological survey, which revealed a number of artifacts along with surprising holes in the limestone bedrock of the property. The focal point of the site is a series of 24 holes forming a perfect circle that is 38 feet in diameter, but excavations also unearthed numerous pieces of evidence of ancient habitation including charcoal, pottery and axe heads. Analysis of the artifacts appeared to demonstrate that they were approximately 2,000 years old! This would be evidence that the site was used by the Tequesta, the native people who lived in southeast Florida long before the arrival of Europeans in the Americas. The working theory was that the holes were made in connection with construction of an ancient structure.

Despite finding weirdly symmetrical holes, the property owner was anxious to proceed with construction of his condominium project, but preservationists objected. Litigation ensued, as it so often does, involving various governmental agencies. Meanwhile, activists including Native Americans, community members, Huichol Indians from Mexico, a Maya shaman, and new age practitioners worked toward preservation of the site and kept the issue in the public eye. A plan to relocate the site (relocating the limestone bedrock??) went nowhere, predictably. Eventually, the county obtained an injunction preventing construction on the site in preparation for a taking by eminent domain, and the developer sold it to the State of Florida at a substantial profit after over a year of controversy.

Throughout this time, scientists engaged in a vigorous debate about what the site might be.

That’s the $64,000 question — opinions differ widely. The site is apparently unique as the only pre-Columbian building site in North America to involve penetration of the bedrock. The circle is also potentially very ancient, with a possible origin more than two millennia in the past. People have even theorized that the site indicates Mayan or Olmec occupation of the area, since those people are the only ancient Americans to have left evidence of monumental construction, although this theory has now been discredited. Perhaps it’s that ancient heritage (and obvious engineering skill — drilling into limestone is no picnic!) that earned this site the nickname “America’s Stonehenge.” However, like Druid sites in the British Isles there is very little hard evidence as to the nature or purpose of the construction. The leading theory seems to be that, given the obvious effort that went into construction, the site was most likely a location for religious ceremony.

At the same time, theories have been advanced that the site is not even ancient! Back in 1999 a Florida archaeology expert suggested that the excavations had not ruled out the possibility that the cuts in the limestone were of modern origin. The location of the circle was directly centered on the septic tank serving the now-demolished apartment complex, after all. Moreover, he noted that he had never seen pre-Columbian post holes that were square (such as those found at the Miami Circle) rather than round.

In any event, it’s clear that the site has nothing to do with the Seminoles and Miccosukees who have reservations in Miami-Dade County and who were active in the efforts to preserve the Miami Circle. Those tribes only arrived in South Florida in the 1700s, and were formed from members of Creek and Choctaw tribes who relocated to avoid pressure from colonial expansion in Georgia and South Carolina.

Who are the Tequesta?

The Tequesta and their ancestors appear to be the earliest human inhabitants of the Miami area.  Europeans managed to completely muddle the names when adopting place names from native peoples. The Tequesta people did not live in the vicinity of Tequesta, Florida — that area was inhabited by the Jaega. The town of Miami was apparently named after the Mayaimi people, but they lived on the shores of Lake Okeechobee. Both the Tequesta and Mayaimi people were related to, and apparently dominated by, the far more numerous Calusa people who lived in southwest Florida. 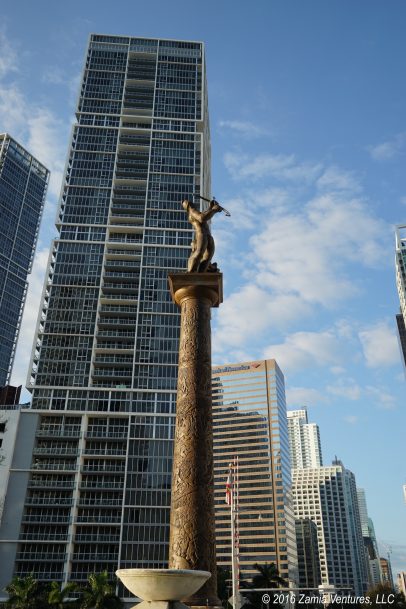 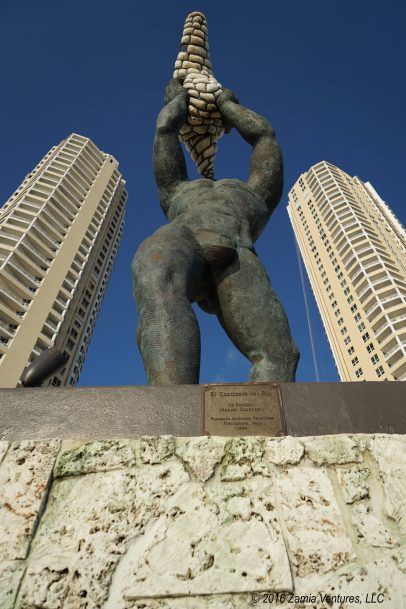 In any event, the Tequesta experienced first European contact in 1513, in the form of Spanish explorers sailing into Biscayne Bay. Several Catholic missions were established in the area that is now Miami-Dade County, and Tequesta leaders were taken to Havana and to Spain. In the early 18th century Spanish colonists implemented a program of relocating the remaining native peoples of South Florida and the Keys to Havana. It’s unclear whether these relocation activities were voluntary, but they accelerated considerably as Spanish influence in the New World shrank, until Spain relinquished control of Florida to Great Britain in 1763. By the time the Creek and Choctaw peoples  — the future Seminoles — were pushed south, the Calusa/Mayaimi/Tequesta culture was shattered.

What did I learn?

It’s easy to think about history as “what came (immediately) before.” The disappearance of the Tequesta more than 100 years before Miami saw its first permanent residents of European ancestry highlights that there are often multiple layers of history. The first European residents of Miami interacted with the Seminoles and Miccosukees and viewed them as the “original” inhabitants. But the people that built the Miami Circle were living in South Florida thousands of years before those groups arrived, and it’s even possible (though not likely) that the Miami Circle was evidence of an even more ancient culture that predated the Tequesta.

Of course, it’s also possible that the Miami Circle is of modern origin and has no archaeological value at all. We human certainly make an impact on our environment where ever we go, and in any era, but it’s challenging to discern the uniquely human effects of hunter-gathers who made most of their tools, clothing and homes from biodegradable materials.

Finally, the circle highlights that in most urban areas the land is being “recycled” when new construction occurs, and there is always a tension between development and preservation. In a relatively young city like Miami, an “old” structure would be merely 100 years old. A 2,000 year old site is outrageously anomalous here! I think the absence of truly historical structures in Miami helped motivate the people advocating for preservation of the circle.

Here are several other resources describing the mysterious Miami Circle:

5 thoughts on “Trying to Make Sense of the Miami Circle”