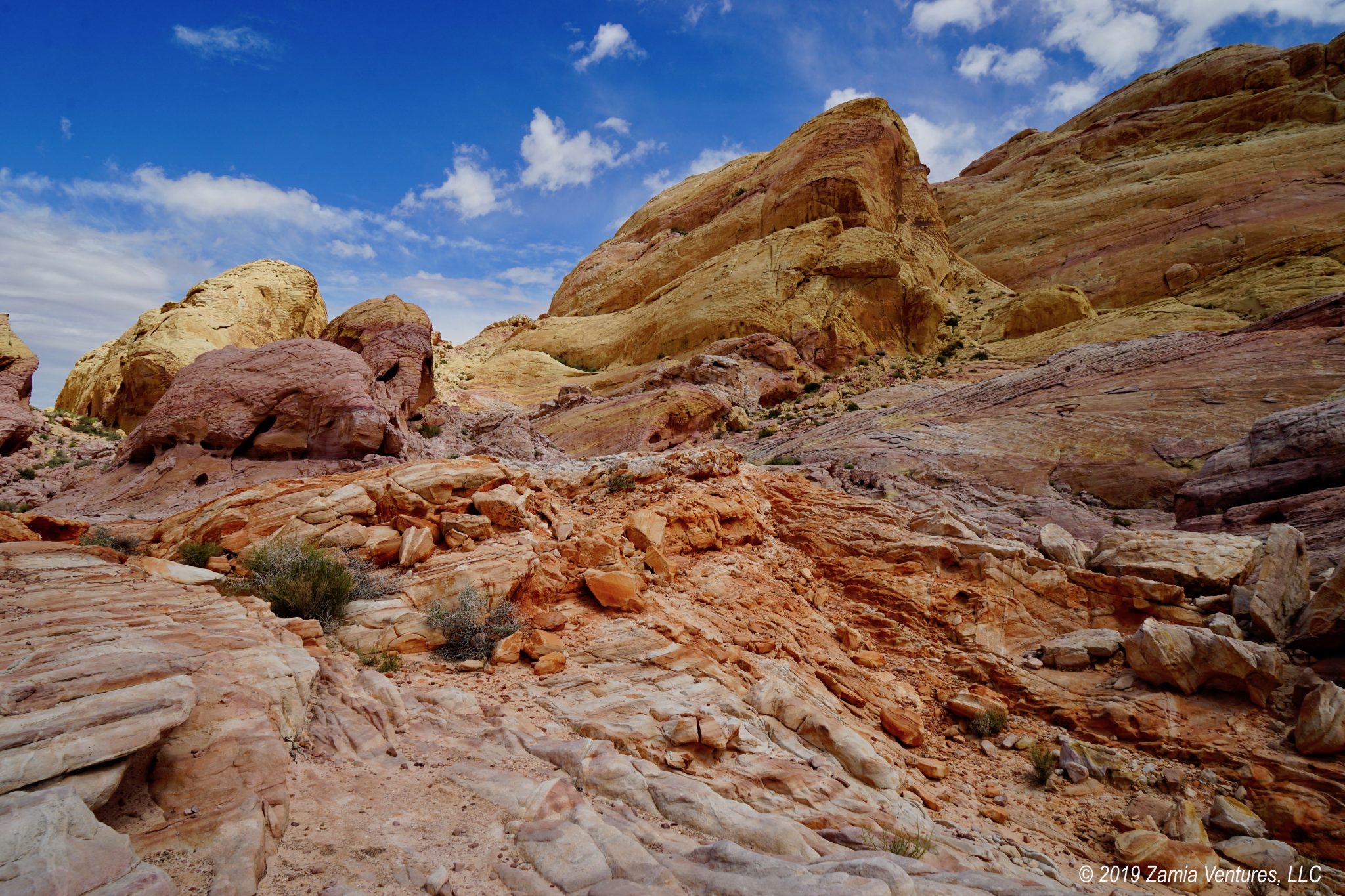 We had heard rave reviews of Valley of Fire State Park from multiple people, RVers and regular travelers alike, so when our route took us through Las Vegas we were sure to make time for a stop. The opportunity to take in red rock scenery and enjoy more desert spring sunshine was a major draw for us. However, the campground here is first come, first serve, which typically requires a bit of strategy to secure a site. Since the beautiful spring weather is likely drawing local campers outdoors, we chose to arrive on a Sunday morning in the hope of snagging a site from a departing weekend visitor. We pulled into the campground around 9:15 a.m. on Sunday and were delighted to score a large pull-through site with electric and water hookups and gorgeous views of the surrounding red rocks. It’s a good thing we got on the road early, because within half an hour after our arrival the campground was completely full, with the 5-6 available sites getting snapped up quickly. Camping options were even slimmer on other days during our stay, when only one or two RVs pulled out and made spots available. Over the course of our 5-night stay we witnessed many disappointed people traveling through the campground in a fruitless search for a camp site. While we were very happy with our camping spot and the park as a whole, it reaffirmed that we really prefer to have reservations when possible.

Upon arriving in the park and making an initial trip to the visitor center, the thing that first struck us was the contrast between the vibrant red rocks, the lush green desert (that wet winter is still paying off), and the muted grays of the oldest uplifted rocks. Upon closer examination, we started to see that the red rocks were not only colorful, but also filled with interesting shapes and textures. In some places the red rocks jutted up like jagged spears emerging from the earth. Other rocks were worn smooth into mesmerizing waves. In some cases, the spiky rocks sat next to the rounded ones, with no apparent explanation for the vast difference in appearance. In many places the rock faces were covered in a black varnish that is a perfect canvas for petroglyphs. Other rock faces were honey-combed with rounded depressions, holes, columns, and even tunnels tucked in the protected underside of the rocks that, once again, defy explanation. 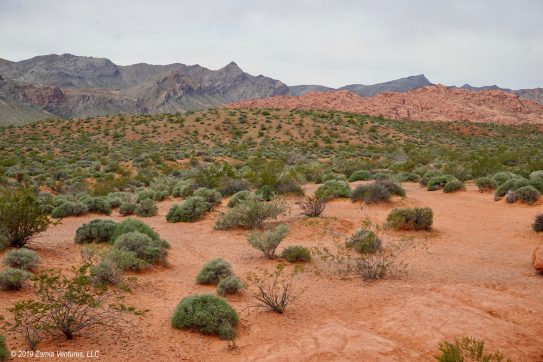 Vista across the valley 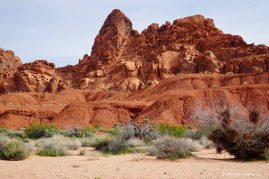 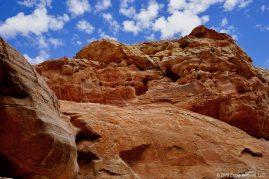 Sharp rocks with rounded column below

In wandering around the park on various hikes, we enjoyed searching for natural arches carved into the rocks by years of erosion. We also enjoyed coming up with creative descriptions of the fanciful shapes in the rocks surrounding us. The park is home to bighorn sheep, and it was fun to run across several groups of them while we were out and about. Other campers reported seeing them in the rocks above the campground, but we were not lucky enough to spot them so close to home. 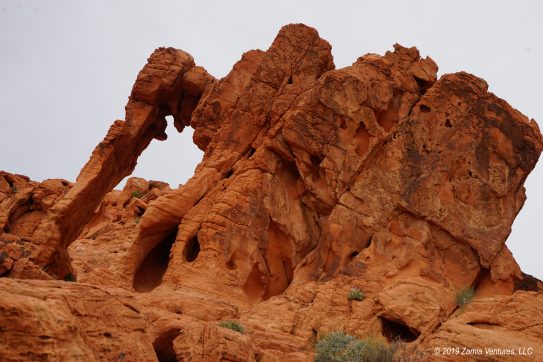 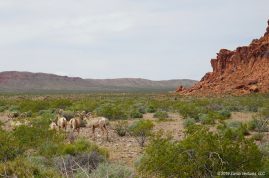 Sheep near the road 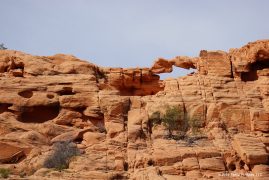 How can this arch be so jagged? 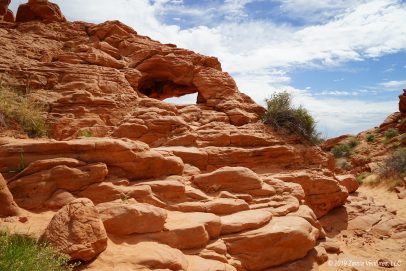 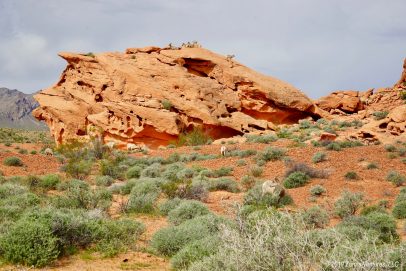 Spot the sheep! There are more than 12 here

While the red rocks inspired the name of this park, the park has multicolored rocks of every imaginable hue. Even in the red rock areas, grey conglomerates are found strewn throughout the washes. But the multicolored sandstone is really the star of the show when it comes to interesting colors and shapes. The mineral deposits in the the Rainbow Vista area have resulted in a rock face that literally shows a rainbow of colors, from red-orange to blue-purple. But the most colorful rocks are in the White Domes area. Here, rich reds compete with bright yellows, vivid pinks, and even plenty of blue and purple tones. The trail through the area is short, but filled with eye-catching sights. I was most excited to see that the colorful rocks have eroded into colorful sand (pink, purple) in different areas. There is even a short slot canyon to explore on this hike. 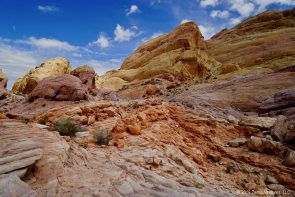 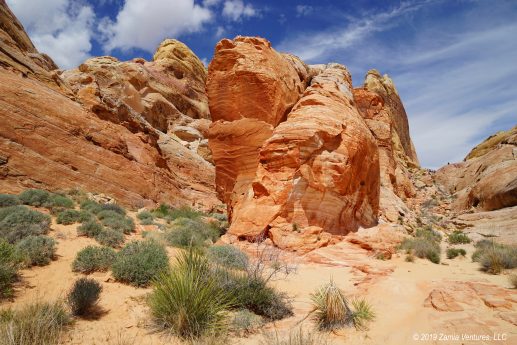 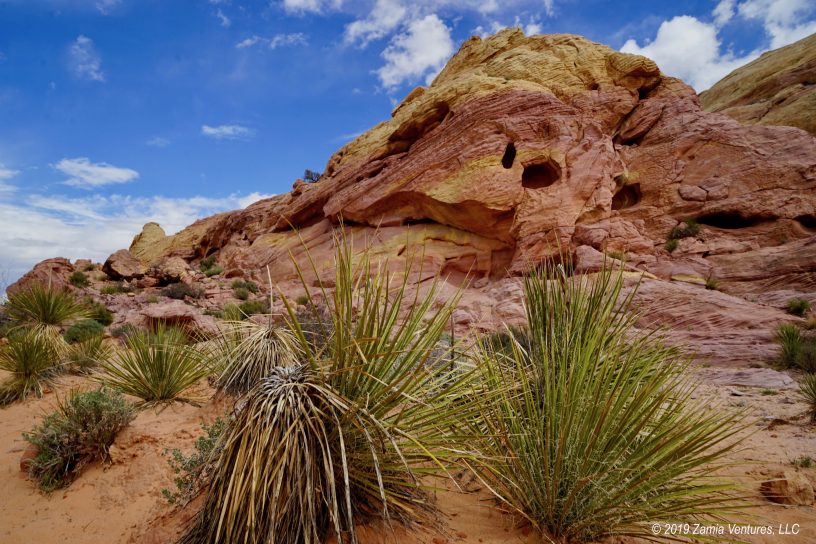 The second most colorful area we visited was the Fire Wave, which combined outstanding colors and undulating sandstone formations.

We visited all the points of interest on the park map that is distributed on the visitor center, which generally involved 1-2 mile jaunts to see particular formations. But for some reason the park map doesn’t include any of the substantial hikes in the park. Fortunately we came armed with the online park map, which offers a variety of more challenging hiking opportunities. We tackled two of these longer, “secret” hikes during our stay. The Natural Arch hike headed up a wash through a variety of different rock formations, and featured a tiny slot canyon, though the trail’s namesake main arch has collapsed. We ended up hiking 2.5 miles up the wash for a 5-mile round trip hike.

The Pinnacles Loop was the long hike we enjoyed most, in large part because it starts at a trailhead within easy walking distance of the campground. Getting out to the back side of a small hill revealed jutting red rock formations that were totally invisible from the campground, which was a nice surprise. Seeing only two other people on the trail enhanced our experience. The total distance of 6.1 miles was the longest hike we attempted, and it was enough.

The main downside of this park is that virtually all of the trails in the park are on soft sand or unstable rocky washes. In addition to requiring breaks to empty sand and pebbles out of our shoes, we found that hiking on soft surfaces was tough on the ankles. The unstable surfaces, the warm daytime temperatures, the parching low humidity, and off-the-charts levels of UV requiring constant sunscreen reapplication combined to limit the mileage we were willing to tackle each day. Translation: after about 5 miles per day I was ready to be done. While trudging along in the sand, we amused ourselves by trying to identify the tracks left in the sand by desert dwellers. We also spent time speculating about the meaning of the many, many petroglyphs that were displayed on the canyon walls. Throughout our hikes, were were continually impressed by the bonanza of blooms that continues to be on display after the southwest’s wet winter. 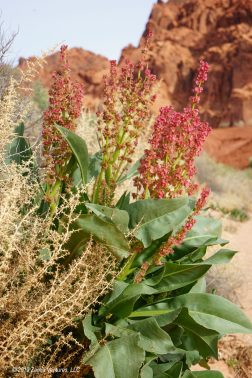 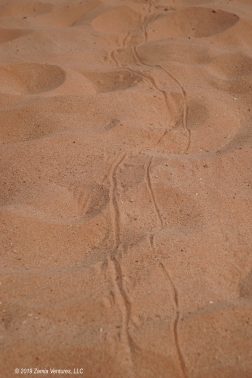 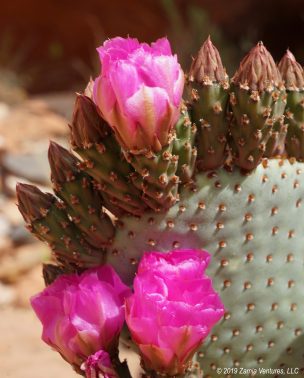 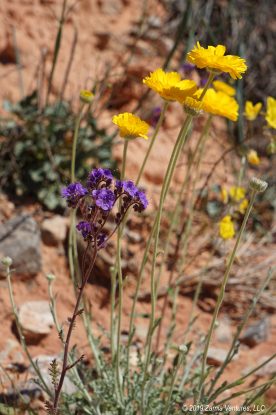 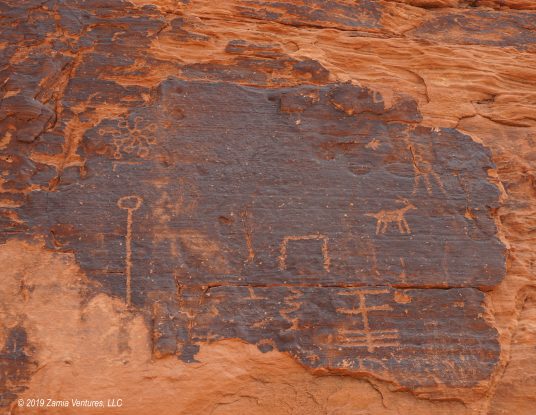 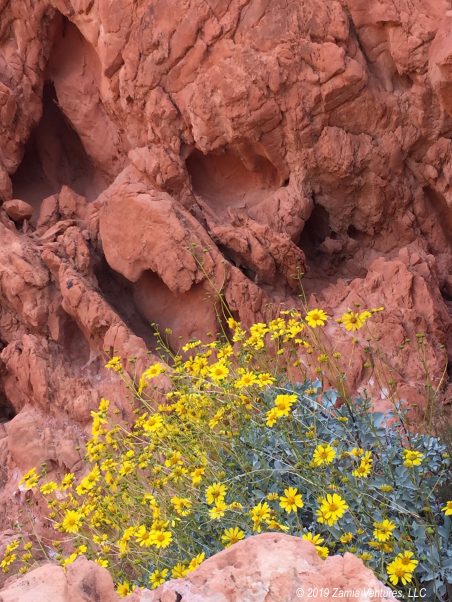 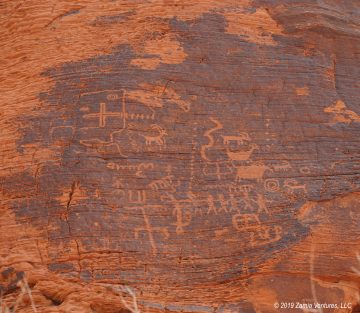 Record of a big hunt? 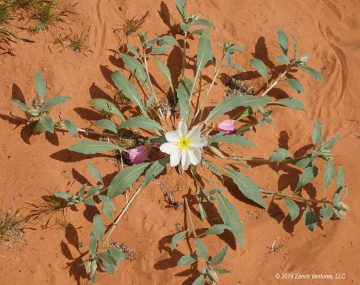 Our stay at colorful and surprising Valley of Fire State Park reignited our interest in geological forces, and just in time. The next segment of our journey takes us into southern Utah, where it’s all about the erosion.

6 thoughts on “Becoming Rockhounds at Valley of Fire State Park”