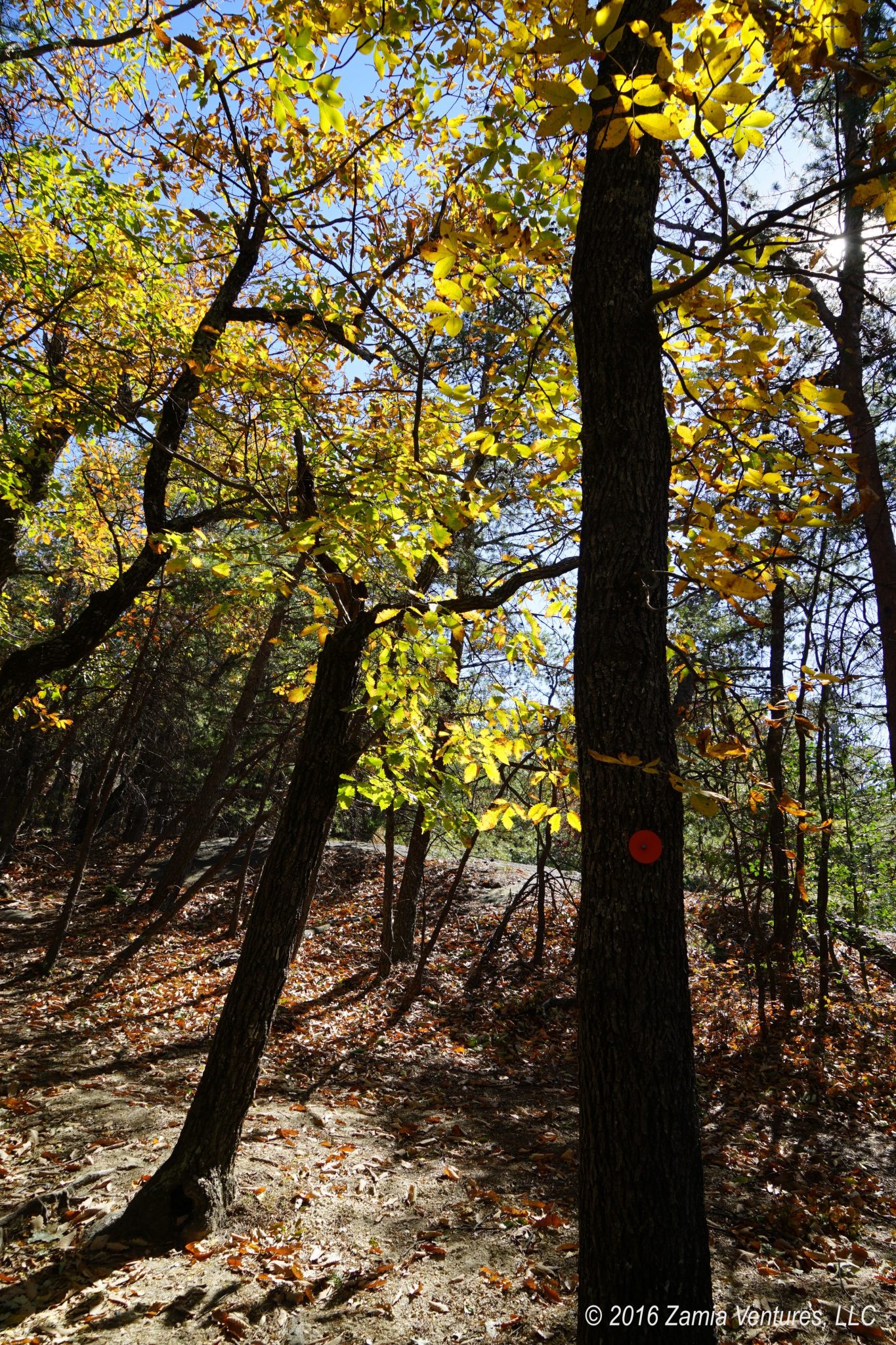 I was in North Carolina for meetings and had the chance to spend a half day at the scenic Stone Mountain State Park in Roaring Gap, NC. This park is not to be confused with Stone Mountain in Georgia. The North Carolina park has no bas relief carvings of confederate generals, no laser light shows, and perhaps best of all no admission charge. With the park located about 60 miles northwest of Winston-Salem, an hour’s drive brought me to the foothills of the Appalachians, just east of the Blue Ridge Mountains. While I was slightly too early to enjoy fall foliage I was treated to a day of nearly perfect weather to enjoy the unique exposed granite mass that gives the park its name.

My first task, after stopping at the visitor center to check out some interesting displays on North Carolina natural history and pioneer culture, was to finalize my hiking plan. 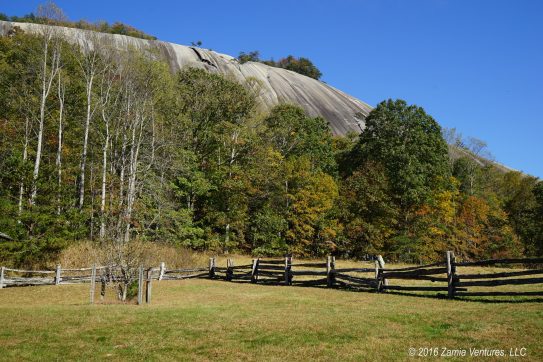 Mountain looks bigger from the bottom of the trail 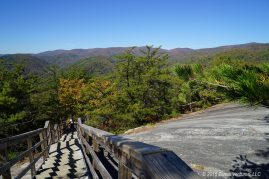 Stairs on the way up 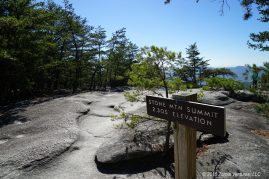 Finally at the summit!

I opted for the Stone Mountain Loop trail, which is a 4.5-mile loop rated “strenuous.” I foolishly assumed the rating was somewhat of an overstatement, but still decided to park at the lower of the two parking areas serving the trail. My plan was to begin the loop at the lower elevation so I could enjoy coming downhill on second half of the loop. I also decided to take the northern half of the loop first, since the southern loop has several optional side spurs that could be interesting, but I would only take advantage of them if time allowed.

The initial stroll along a well-marked path through open forest was pleasant. Then the trail started to climb – and continued to climb more or less straight up the side of the mountain. After about half an hour of nearly continuous steep uphill climbing – which I later confirmed was close to 1,000 feet of elevation change – I was amazed to discover that (a) I was still alive and (b) I was not yet at the summit, but was starting to see exposed granite.

The Appalachian mountains are old and millions of years of weathering has made for interesting undulations in the exposed portions of the granite hills. Even more surprising, perhaps, is how resilient granite is proven to be after such long exposure. The forces that carved the Grand Canyon have merely left the Appalachians a little rounded – a good explanation for granite’s use as countertops, I suppose. 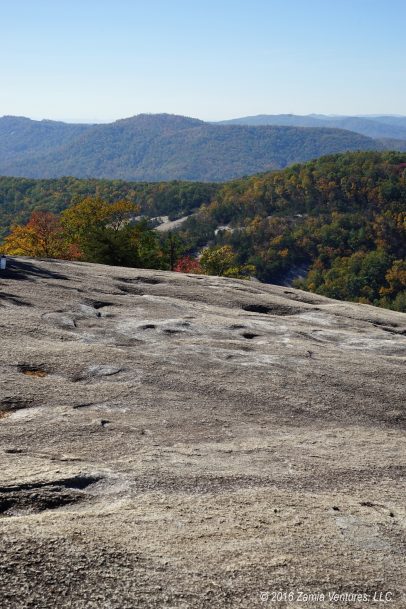 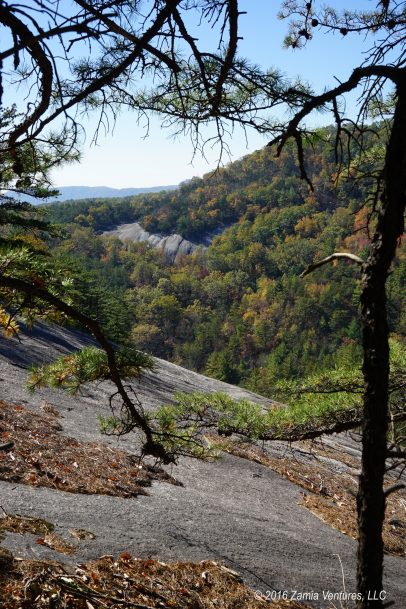 After finally reaching the summit and taking plenty of photos (a/k/a taking a long break), I continued around the loop. It turns out the balance of the loop trail is a gently sloping, meandering path with only one other major elevation change. It was so gentle that dozens of dogs, including lap dogs with tiny legs, were able to handle the trek!

The only really challenging part of the southern half of the Stone Mountain Loop is a long stretch of stairways that takes the trail along a 200-foot “waterfall.” At this time of year this water feature is more like a stream traveling down a relatively steep streambed, so the water doesn’t actually fall through the air. The balance of the trail generally follows the stream and keeps hikers near a pleasantly babbling brook.

I declined to include the extra side loops in my trek, since my day was definitely “strenuous” enough. When nearing the end of my hike I arrived at the historic Hutchinson Homestead, picturesquely located in the meadow below the face of Stone Mountain. 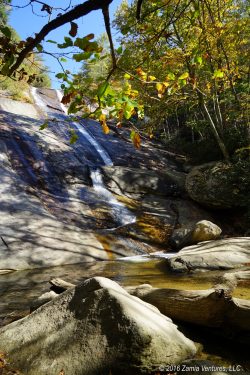 The waterfall is nice but not overly impressive 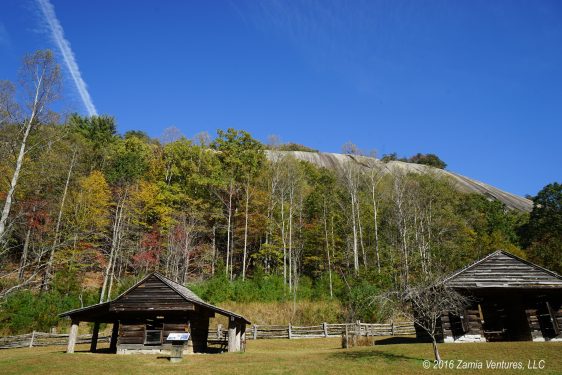 The park includes several of the original buildings constructed by the pioneer Hutchinson family as early as 1855, as well as a few replicas and restored buildings. The interesting interpretive signage and actual furnishings and tools gave good insight into the self-reliance, skills and resilience of this early pioneer family. The field below the face of Stone Mountain also provided a great vantage point for watching people climbing the face – tackling an even harder task than the seemingly endless stairs to the summit.

Despite overestimating my climbing skills, I really enjoyed the day trip from Winston-Salem to the slightly higher elevations of the park. The drive through rural Forsyth, Stokes and Wilkes County, North Carolina provided a snapshot of rural life in North Carolina, and the park itself was peaceful despite the crowds.

Arrive early as parking fills up quickly on nice Saturdays! Even though the park is fairly remote, I shared the trail with boy scout troops, families, couples, campers, photographers and numerous fellow nature lovers.

Also, taking the loop counterclockwise (from either the upper or lower parking lot) avoids the really quick elevation gain on the northwest side of the loop, but does require hiking up the long staircase alongside the waterfall.