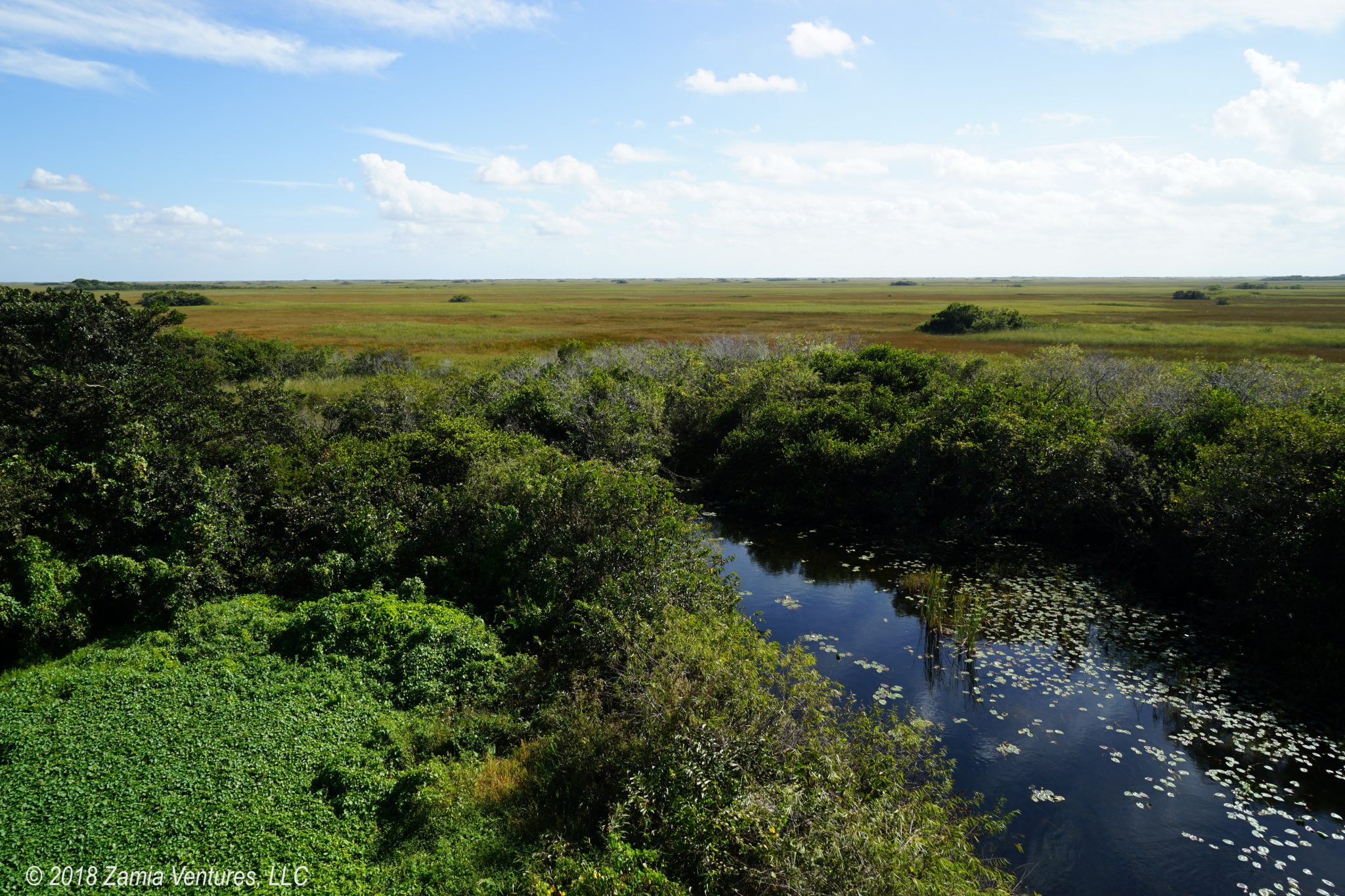 It’s hard to believe that we have been living full time in Miami for over a year, and had not yet visited the Everglades from our new home base. Miami has the distinction of bordering two of the most unique national parks in the country — the underwater wonderland of Biscayne National Park and the flat (and also wet) expanse of the River of Grass in Everglades National Park. We have of course visited both in the past, but finally took advantage of our proximity for a Thanksgiving Day sojourn to Shark Valley, in the northern reaches of Everglades National Park.

How to get there? Just head west from downtown Miami for about an hour. Southwest 8th Street, AKA Calle Ocho, is the heart of Little Havana in the downtown area, but head west until the glitzy skyscrapers are far behind and this street becomes US 41, the Tamiami Trail. The intersection of Krome Avenue, the extreme western edge of development in Miami-Dade County, and SW 8th Street features the Miccosukee bingo and gaming facility and serves as the official entry into the Everglades proper. After traveling another 20 miles west into the true wilderness of the Everglades we arrived at the Shark Valley Visitor Center.

Our plan was to rent bikes and travel the paved 15-mile loop road out to the observation tower that is improbably planted in the middle of the wetlands. My personal goal was not to annoy Ken with too many stops for photo moments … which is hard to do at Shark Valley, a place filled with photogenic wildlife! We were visiting at a good time of year. Since we are several months past the end of the wet, rainy summer season, the wildlife of the Everglades were starting to congregate in places with deeper water, such as Shark Valley. 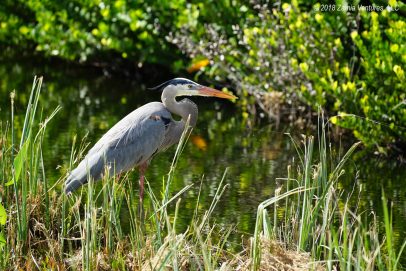 Blue heron patiently waiting for tasty fish to swim by. 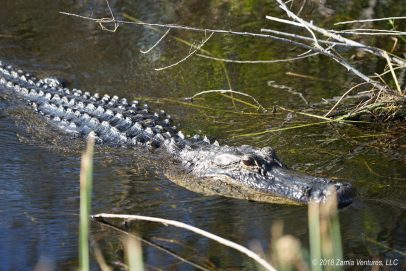 Gator on the move

Shark Valley is not a valley — nothing in Florida has enough elevation to be considered a “mountain” or even a “hill” so valleys are a geographic impossibility. Still, Shark Valley is a slough with slightly deeper water which stays wet through the end of the dry season. Also, a historical oil exploration project (long story) resulted in construction of a paved road from the Tamiami Trail out to a point in the middle of the slough, complete with an observation tower.

Building the road involved digging a channel to secure limestone for the roadbed, which is now a very deep canal-like structure that holds water throughout the dry season and supports a diverse habitat of trees, shrubs, fish, alligators and wading birds.

While the road out to the tower is a straight 7-mile shot, the return trip to the visitor center is a meandering 8 mile road which was built with much less impact on the existing environment, meaning that the return trip involves seeing the Everglades more in their natural state. Both portions of the loop are interesting, and in dry season provide excellent opportunities to see the wildlife of the Everglades up close and personal.

Of course, the most popular and intriguing creatures are American alligators. In the right season, they are pretty easy to spot at Shark Valley. We counted approximately 40 in our leisurely bike tour, and we were very early in the season. These impressive reptiles tend to lounge by the side of the road, sunning their cold-blooded selves, or swim languidly down the channels of deeper water.

They seem remarkably unconcerned about the legions of humans pedaling past (including children, who presumably are more bite-sized?). Of course, there are plenty of signs warning visitors to keep a safe distance from all the wildlife. I have to think there are plenty of incidents of people discovering that “selfie with alligator” is not a great idea. Fortunately for us none of the large reptiles were at all interested in us and we just scooted on by.

The most exciting wildlife sighting was one for which I have no photo evidence, so you’ll have to believe me that we watched a snail kite on the hunt! The snail kite was one of the species that was used to forcefully make the case for the restoration of the historical water flows through the Everglades. The web of canals, dams, levees and other water control structures built to facilitate the development of South Florida resulted in major disruptions to the normal seasonal water flows from Lake Okeechobee down to Florida Bay. This destroyed the population of the apple snail, a creature that lays its eggs on the sawgrass just above the water line to ensure the young could access the water upon hatching. Water releases during winter would swamp the eggs, while failure to release water led to drought conditions in the Everglades. Either outcome killed the baby snails, which was a major problem for snail kites because, as the name implies, their main food source is the snails. While these birds of prey were never globally endangered, the U.S. population, which is restricted to southern Florida, was critically endangered. 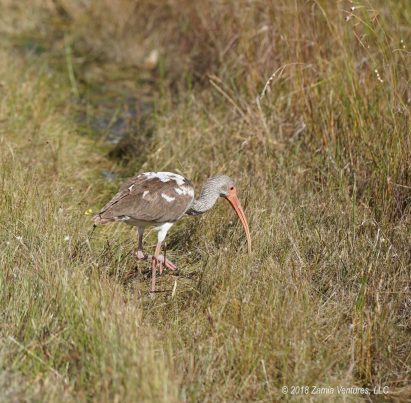 This is a limpkin, not a snail kite. 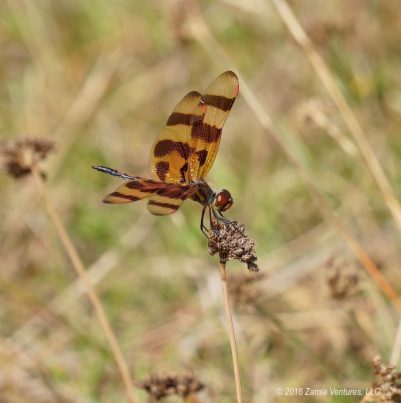 As a kid growing up in South Florida, every trip to the Everglades involved peering into the binoculars in hopes of seeing the rare snail kite far in the distance. Turns out, they are pretty easy to spot when hunting snails… since snails are on the ground. We saw a hawk-looking bird swooping down to the sawgrass from about 25-30 feet in the air, and its most notable feature was the white coloration of the feathers at the base of the tail. Thanks to 3 bars of LTE service in the middle of the Everglades (!) we were able to confirm that this was indeed the long sought-after snail kite! It was a cool moment.

Mostly, we loved being out in the wilderness. The weather was great — low humidity, a slight breeze, and (amazingly) no mosquitoes. We were overpowered by the serenity of the silence. It’s hard to appreciate how much noise pollution we experience daily in downtown Miami (hello, constant construction activities!) until we get away from it all. I am hoping this winter that we can take more time to enjoy the natural beauty of South Florida, since this is the best season to do so.

In any case, we finished our 15-mile bike trip in good spirits and felt we fully earned our lavish Thanksgiving spread. Here are a few final photos from the day: 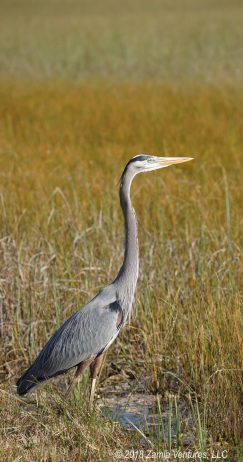 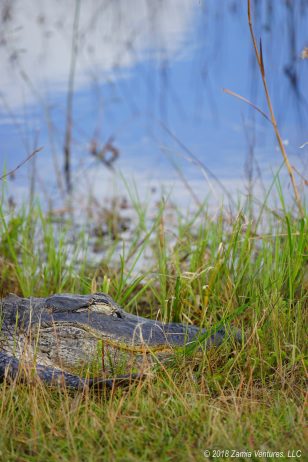 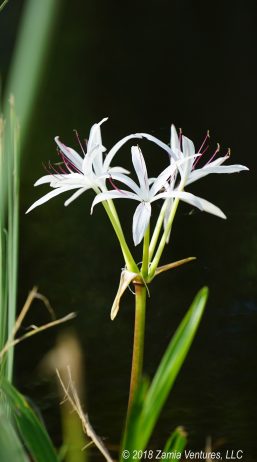