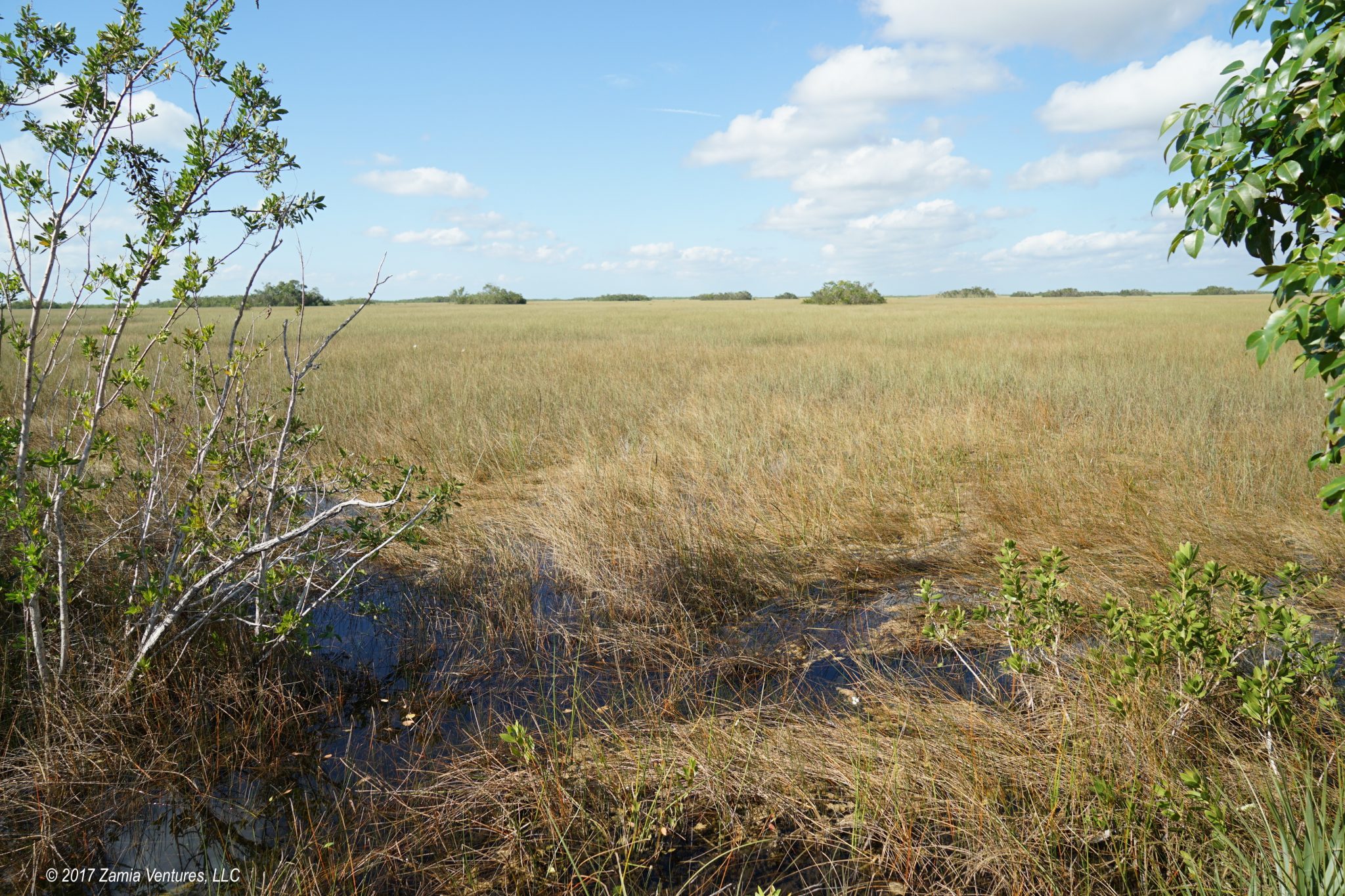 Even though our area of downtown Miami came through Hurricane Irma relatively unscathed, we live in an entirely fabricated environment that’s designed to withstand storms and other natural events. Underground power lines, steel-reinforced concrete construction, and a limited amount of trees all contributed to very light damage from Irma in Miami’s downtown core. However, we knew that other areas of South Florida were not so lucky — just traveling to the leafy suburb of Coral Gables to the University of Miami campus revealed thousands of cubic yards of debris from trees downed by the hurricane’s winds.

One particularly hard-hit area was Everglades National Park. The southern tip of the peninsula bore the brunt of the fierce winds in Irma’s northeast quadrant, and the vast watery landscape offers little protection from wind. The very flat not-quite-water-not-quite-land environment of the southern Everglades is also vulnerable to storm surge far inland because of its minuscule elevation.

We had previously made reservations to spend a long weekend on the New Year holiday camping at Flamingo, in the far southern reaches of Everglades National Park. Unfortunately the park service had to refund us our camping fees, since the campground was apparently heavily damaged and has not yet reopened. We also knew that the Shark Valley area which we visited last year on Thanksgiving, in the north-central portion of the park, had been closed since the storm because high water covered the roadway and threatened to flood the visitor center.

The park service website informed us that both Shark Valley and the road down to Flamingo were clear and open on December 16, so that weekend we took a day trip to Flamingo to survey the damage to structures and the environment.

In short, the damage is pretty severe, and became more apparent as we headed deeper into the park. At the Royal Palm visitor center near the Homestead entrance to the park (map here), the Anhinga boardwalk was open and undamaged, but the nearby Gumbo Limbo trail was completely closed to visitors, apparently because of large numbers of trees downed on the trail. There’s a small bit of irony here — the trail was described on park materials as illustrating the recovery of an upland hammock environment after a hurricane (Andrew). Guess the park service will need to update the signage on that one.

Further south, the Mahogany Hammock trail  (map here) will need to be similarly updated, since the namesake mahogany trees surrounding the boardwalk were virtually all snapped like twigs.

And the destruction intensified as we drove to the far southern reaches of the park. Of the few structures that serve the public in Flamingo (visitor center, restaurant, marina store, amphitheater, campground), only the visitor center was open, and it was surrounded by caution tape. There is no water service and no restrooms, and while the boat ramp is open for use there are many, many signs warning about the danger of sunken boats and debris throughout the park’s waterways and Florida Bay. I guess it was fitting that the only wildlife we observed in Flamingo — normally teeming with critters — was a lone manatee surfacing for air and several very large vultures prowling the marina area on foot.

The Flamingo area was clearly inundated with storm surge, and the upland plants did not enjoy the experience. The trees growing closest to the roadway enjoyed a slight elevation advantage, which showed in their ability to regrow green leaves. But behind the thin curtain of green was a moonscape of white, desiccated remains of trees that did not survive the storm. Surprisingly for a place that is normally overwhelmingly lush and green, my main impression was of deathly white and grey landscapes. The two photos below show what saltwater inundation does to a formerly grassy field and a normally dense forest of trees now struggling to regrow leaves. 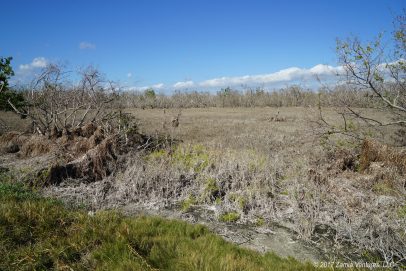 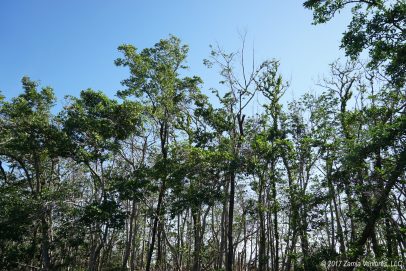 My initial reaction to all the destruction was sadness. Seeing dead plants everyone is just depressing, and it’s a little demoralizing to know that it will likely take decades for these areas to return to their pre-storm condition. But on further reflection, I realized that there’s nothing particularly magical or perfect about the conditions that existed here just before Irma struck. They just happen to be the conditions I was accustomed to. Hurricanes are a regularly occurring event in South Florida, and have been shaping the ecosystems of the Everglades for millennia.

Not only is hurricane destruction normal, it’s an opportunity for different species to thrive. Plants and animals that might struggle to survive underneath a dense tree canopy can flourish the newly created open spaces. Seedlings of different grasses can take off, unencumbered by shading trees. New open fields are fresh hunting grounds for owls. The downed trees serve as a valuable source of nutrients to help the new community of plants and animals get established. Cue the theme song from The Lion King, because it’s the circle of life in action.

Thanks to some fairly significant recent changes in our lives, I’ve been reflecting a lot recently on how to deal with change.

It’s not particularly insightful to say that change is always difficult for people to embrace. There are even multiple economic theories identifying different aspects of this phenomenon, from loss aversion to the endowment effect (one of the research projects that helped Richard Thaler win the most recent Nobel prize in economics). The challenge in dealing with change productively is to overcome our instincts — avoid the tendency to overemphasize what’s being lost, and discount what’s being gained.

But even a clear-eyed appreciation of the losses and gains doesn’t avoid the fact that changing circumstances inherently create winners and losers. It’s normal to experience sadness about the fate of the losers, and I would not want to lose my appreciation for what has been lost. At the same time, I want to remain optimistic about the future and view the new opportunities positively. In the Everglades, a large amount of death and destruction is creating opportunities for new lives and communities to blossom. Our visit presented us with some fairly searing landscapes, but eventually we came to see them as part of the normal life cycle of the dynamic Everglades environment.

In our own lives, we hope to maintain the same appreciation for both the sweetness and disappointment that major changes bring.

2 thoughts on “Seeing Renewal in Destruction at Everglades NP”