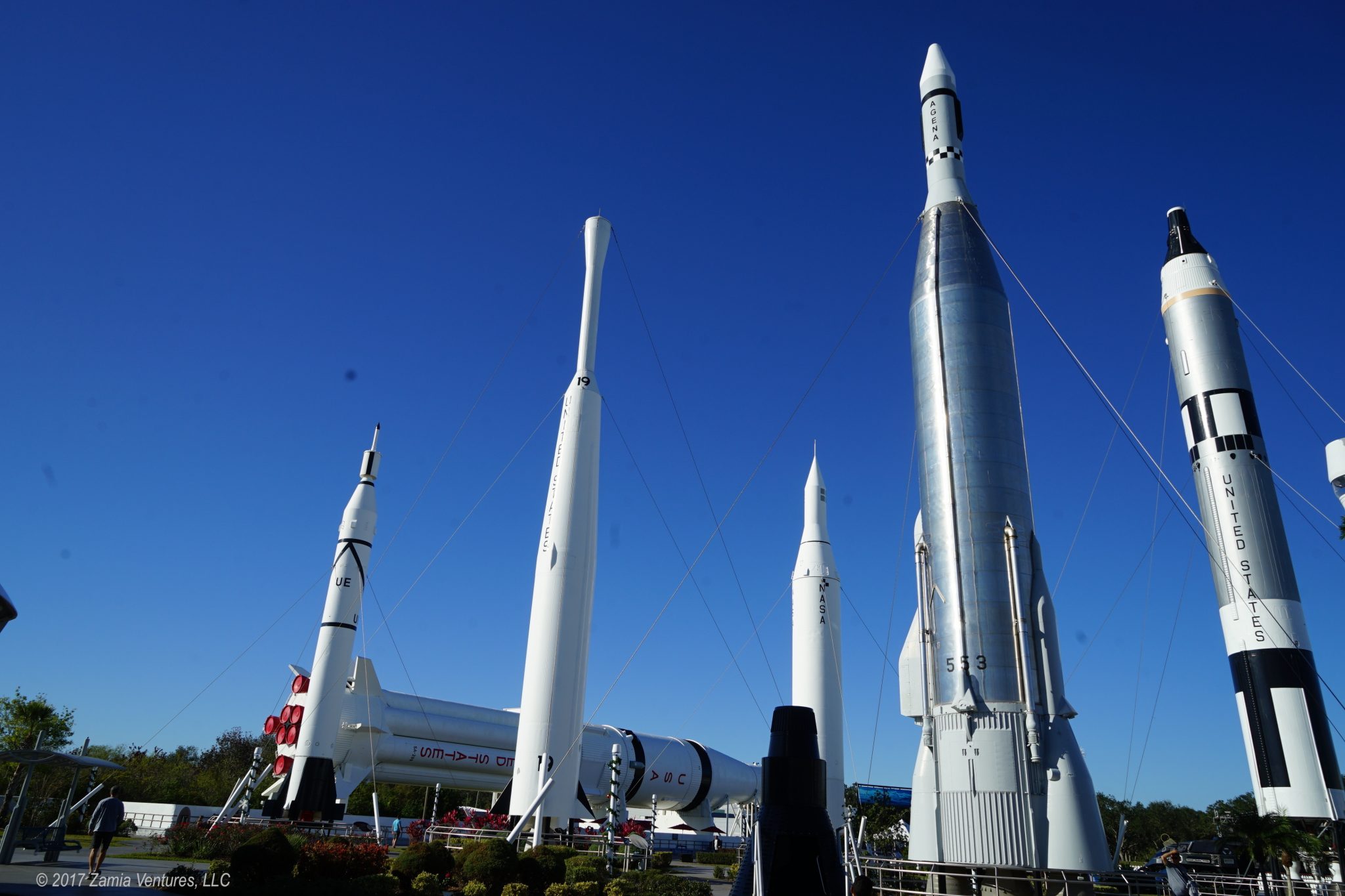 When our new year’s holiday plans changed from Flamingo to Sebastian, courtesy of Hurricane Irma, our new camping location put us within striking distance of the Kennedy Space Center at Cape Canaveral. As die-hard space geeks, a visit to KSC was at the top of our list of planned activities during our 5-day visit to the area. Not being able to defer gratification, at least not where space and science are concerned, we hit Kennedy on our first full day in the area. It was truly an outstanding attraction that covered the past, present and future of the space program.

It’s hard to imagine that just over 60 years ago, before the launch of Sputnik, the idea of human-created objects in orbit around our planet seemed unnatural and almost unthinkable. Once the Space Race was on, the pace of scientific and engineering breakthroughs — and acts of heroism/insanity — was truly remarkable. The rocket garden at KSC, pictured above, has examples from many of the different classes of rockets used to launch the earliest U.S. communications satellites (our version of Sputnik) as well as early efforts to put people in space. Many of these early rockets were simply repurposed intercontinental ballistic missile delivery systems, calling into question the sanity of a person who would agree to be placed in a tiny capsule atop these massive incendiary devices. The earliest rockets seem petite when compared to later versions, but are impressive in their own right — see Ken for scale at the bottom left of the photo above. Even more incredible is that these powerful machines were designed and operated using mostly manual calculations of the complicated relationship between fuel ignition, thrust, gravity (as it affects a rocket with constantly diminishing weight as fuel burns), and momentum. Just getting a person into space and back home safely must have seemed like a stupendous achievement, but on May 25, 1961, just 20 days after the first U.S. manned space flight in the Mercury program — a suborbital flight less than 16 minutes long — President Kennedy announced the ambitious goal of putting men on the moon by the end of the decade. Talk about giving people stretch goals.

NASA obviously had a lot of work to do to accomplish the moonshot, and KSC does an excellent job of capturing the scale of the task and the excitement of each interim achievement. This included everything from discovering whether people were able to eat in space (yes, the human esophagus works in a weightless environment) to developing appropriate propulsion and steering technology to inventing space suits that could be worn on the moon. Over 400,000 people were employed in various aspects of the space program in the 1960s, and they worked furiously for a decade to achieve intermediate goals in preparation for a moon landing. The ultimate success of the Apollo program could not have happened without single-minded focus, and broad financial support from the federal government. Candidly, it made me a little jealous of a time that our nation was laser-focused on a task of epic scientific proportions. KSC has a notable collection of artifacts and displays detailing the many facets of innovation that helped the Apollo program achieve its objective. 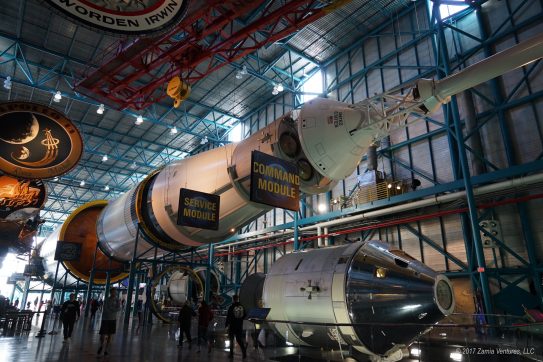 This rocket is HUGE! (Ken for scale) 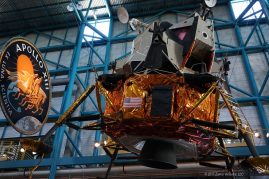 A lunar lander from the Apollo program 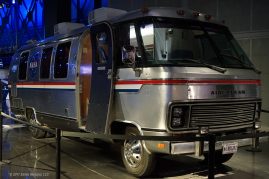 Of course I had to take a photo of the Airstream that took astronauts to the launch pad! 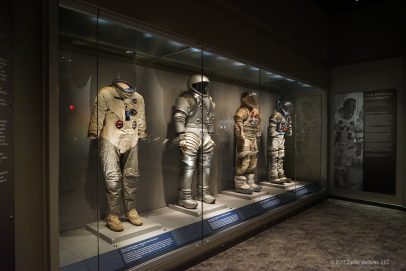 Some of the early space suit prototypes for the Apollo program 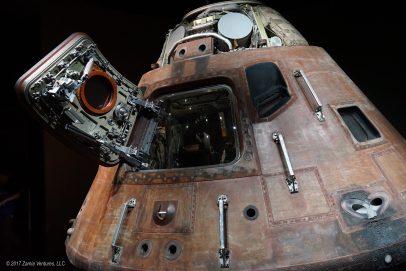 The best part of the Apollo / Saturn V exhibit is the dramatic entrance. After a brief and informative film about the moon shot challenge, guests are led into an auditorium fitted with the actual control room equipment for Apollo 8 — the first mission that reached the moon and orbited, but did not land — and are treated to an audiovisual reenactment of the final countdown to liftoff. The immersive experience is full of drama, and I had genuine anxiety during the countdown sequence. Once liftoff is achieved (to triumphant background music, of course), guests exit into the main exhibit hall, where they immediately encounter the business end of a Saturn V rocket:

Wow!!  Ken and I both teared up, because we are just that much into scientific achievement and giant machines that seem to defy physics. I doubt I’ll be able to explain the awesome size of the Saturn V, the launch vehicle for the lunar modules, because even the designers of the KSC exhibits were forced to resort to weird comparisons that I really can’t comprehend. Apparently, it has the thrust of approximately 350 fighter jets. Or 8,000 fields of Daytona 500 starters. I don’t really know how to conceptualize numbers that big, but needless to say we were impressed. The delight in seeing the most powerful rocket ever created was enhanced by knowing the role it played in making the impossible into a reality, as part of a national effort.

The Apollo exhibit also did an excellent job of highlighting the degree of international attention and excitement that the moon landing generated in 1969. Not everything about 1969 was great — and it’s clear that the US war in Vietnam was unpopular around the world and also at home — but this made me a little nostalgic for a time when people around the globe looked to the US as a leader in achieving goals that benefit and lift up all of humanity.

KSC is fortunate to have one of the four remaining original space shuttles, and Atlantis is displayed in fine form. Like the Apollo / Saturn V exhibit, the Atlantis exhibit brings visitors through an informative and compelling multimedia experience which explains the origins and history of the shuttle program, the challenges it faced, and the accomplishments of the missions. The story arc has a satisfying conclusion, which is followed by a dramatic entry into the shuttle exhibit hall, where we saw Atlantis in all her glory: 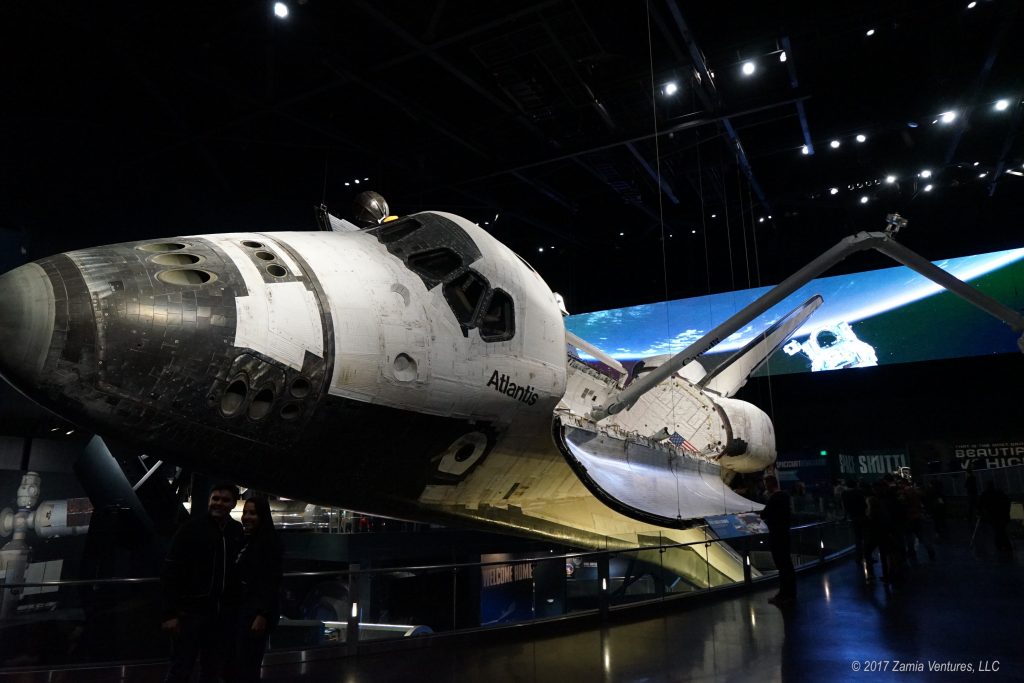 This exhibit details the capabilities of the shuttle orbiters, including their innovative rocket engines (with thrust equivalent to 32 million horses — another inscrutable explanation), the living quarters, and the scientific achievements of the program. This last area included a great exhibit about the Hubble Space Telescope, which was visited by 6 different shuttle missions, and its successor the James Webb Space Telescope. This astronomy geek was in heaven. 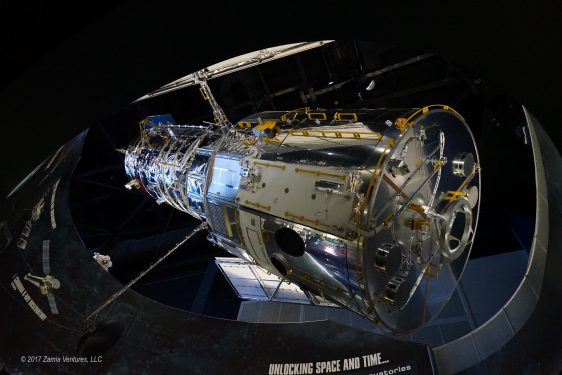 On our bus tour of the Kennedy Space Center launch complex, we were thrilled to see launch pad 39A — the departure point for everything from Apollo 11 to SkyLab to numerous space shuttles — back in use for SpaceX Falcon rocket launches. The up-close views of the gigantic vehicle assembly building, along with the massive “crawlers” that transport equipment to the launch pads, were also highlights. 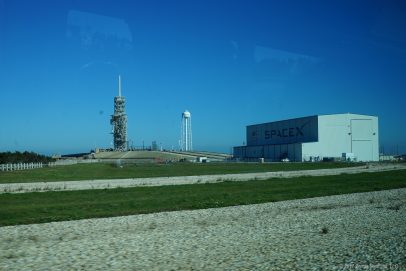 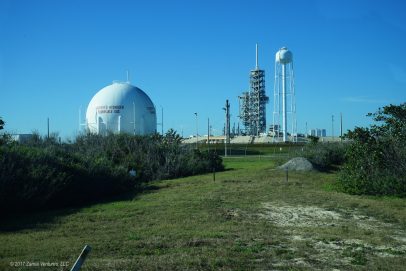 Another bus window view of launch pad 39A

New Frontiers: Mars and Beyond

The last piece of KSC that truly warmed our nerdy little hearts is the exciting plans for further space exploration. We can’t wait for the new Space Launch System (SLS) to begin launches from the Kennedy Space Center in 2020, with plans for a return to the moon and journeys to Mars. US space leadership can’t resume soon enough for us! Meanwhile, we eagerly follow the activities of all the robotic explorers who are paving the way for future manned missions, from Voyager‘s recent exit from the solar system to the sturdy rovers that are exploring that Martian surface (Curiosity and Opportunity). Let me just end with a recommendation for one of my favorite space-related videos, which shows the amazingly complicated landing of Curiosity as a combination of live reaction at the Jet Propulsion Laboratory and animation of the events occurring on Mars. Here’s the link to a concise version. If that doesn’t make you cheer, then you are not a space geek!

If you’re a space nerd like us, come at opening (9 am), do everything, stay all day, have a great time. That is all.

5 thoughts on “Geeking Out at Kennedy Space Center”