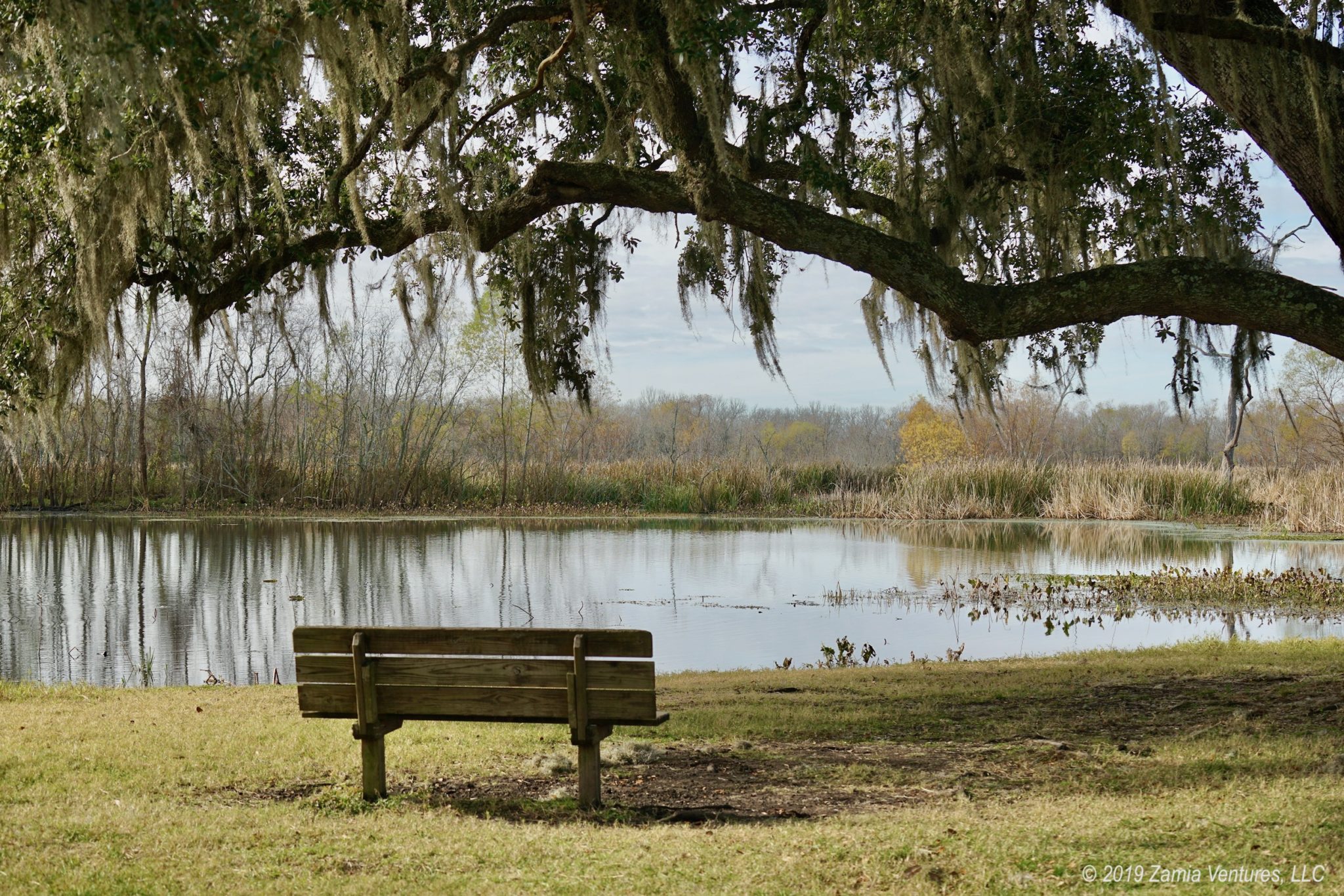 From reading the news, I get the impression that some of our fellow Americans would consider it a sign of the apocalypse if they pulled into a state park campground and discovered that their neighbors were a Chinese family and the over-the-air TV options included several stations in Vietnamese. This is exactly what happened to us outside Houston, and we loved it.

Even though we both grew up in predominantly white suburbs, as we moved through our careers we ended up living and working in very diverse and international places like Atlanta, New York City, and Miami. Living in Miami, it was completely unsurprising to hear Spanish, Haitian Creole, Portuguese, Russian, and many other languages spoken on the street, in restaurants, and in stores. Obviously every one’s benchmark for “normal” is established by their unique personal experiences, but for us it’s normal to interact with people who speak English with heavy accents and who come from completely different backgrounds than we do. High levels of immigration are signs of a healthy economy and a vibrant community, and we think the fact that people want to come from all over the world to live and work here is something to be proud of. The very obvious diversity of Houston impressed us everywhere we went, and felt a bit like a cultural homecoming for us.

The one destination we didn’t want to miss in Houston was the Johnson Space Center, or more specifically the tourist section called Space Center Houston. After previously visiting Kennedy Space Center in Florida and the U.S. Space and Rocket Center in Huntsville, we have now completed a trifecta of NASA space facilities. Achievement unlocked!

Space Center Houston has two core attractions, and they were both generally presented well. The main space feature in Houston is Mission Control… as in, “Houston, we have a problem.” The historical mission control facility has been restored to its 1969 condition, and visitors sit in the original viewer lounge while an audio-visual presentation plays the communications between Houston and the moon lander as the Eagle approached the moon, and later as the crew prepared for Neil Armstrong to take the first steps on the moon. It was really exciting to hear the coordination between Houston and the astronauts as the lander approached the Sea of Tranquility and touched down, especially while seeing it all on the (antiquated) original displays of the craft’s position and attitude, and this was the first time we had heard the preparatory communications that preceded the famous “one small step for man” epigram. It turns out there was plenty of discussion about whether the lander’s ladder extended properly, how far the feet had sunk into the lunar surface, and other mission critical but less quoteable information.

The other interesting item at Space Center Houston is the original 747 shuttle carrier aircraft (SCA), with a replica shuttle mounted on top. The interpretive information in the SCA did a nice job explaining the different options that were considered for moving the shuttles from their landing spots at Edwards AFB to Kennedy for launch, as well as the engineering challenges involved in piggy-backing a flight-worthy orbiter vehicle on top of an airplane. It was cool to see the bulkheads added to the 747 to support the weight of the shuttle, as well as the scale models used to demonstrate the flight-worthiness of the whole contraption. 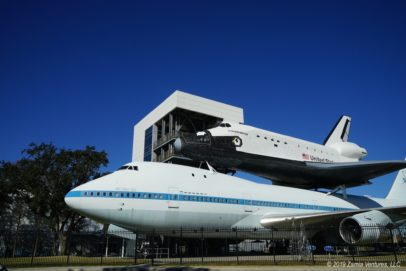 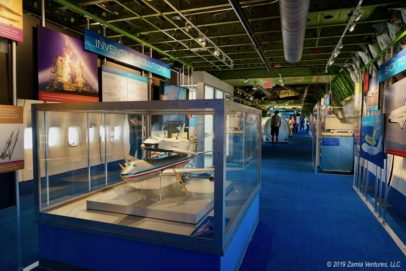 Inside the shuttle carrier

Outside of these two items, however, we thought Space Center Houston was pretty lame. On our tram ride from the main facility over to Mission Control, our narrator was a sullen teenager who raced through the mandatory script and her speed and monotone made it hard to understand the narration (to say nothing of her total lack of enthusiasm). Many of the attractions at the Space Center rely on human narrators, and in our opinion the staff needs a major upgrade. We attended a “Mission Briefing” that was advertised thusly:

Keep yourself posted on the mission of the Mars Science Lab, also known as the rover Curiosity. Learn about its expedition, the important findings NASA has made and what NASA has planned for future Mars exploration. See images and videos taken by Curiosity and follow its path throughout the red planet.

It turned out to be a lame skit based around the idea of travel agents trying to sell people trips to Mars, presented by young people with no acting skills who kept forgetting their lines. It was terrible.

The artifacts were also pretty weak, outside of the historic Apollo control room and the shuttle carrier aircraft. There were a few space suits, a moon rock, and one or two crew capsules on display, but overall this Space Center clearly skipped the meeting with the Smithsonian at which good NASA artifacts were being distributed to various science museums. Huntsville has excellent materials relating to rocket development including prototypes and personal effects of Werner von Braun. Kennedy has a huge array of items ranging from space suits to original guidance computer modules to fun items like a spare lunar rover. Many of the items in Houston are either reproductions or lame. It’s hard to get excited about the lectern that JFK stood behind when making the speech about going to the moon (we do these things not because they are easy but because they are hard) or a free Stetson hat given to an Apollo astronaut by the Houston Chamber of Commerce. We saw many more and much better items from early space flights at the virtually-unknown space history museum in Alamogordo, NM. 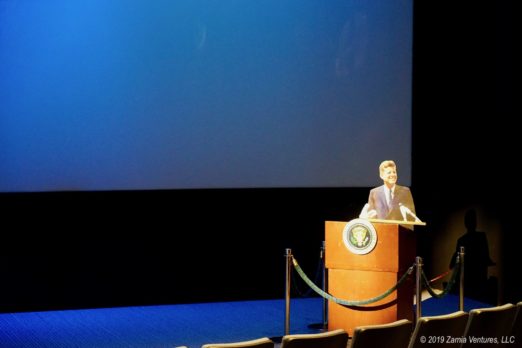 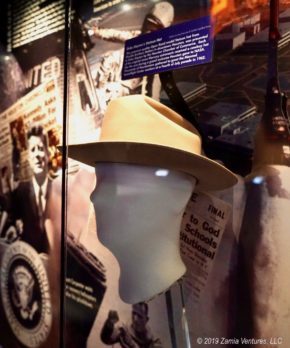 After visiting all three major space attractions, we can definitively say that Kennedy is the best. And we don’t just say that because of home state bias. Though I may roll my eyes a bit at seemingly everything in Florida being either Disney or a Disney wanna-be, the fact is that Disney is outstanding at story-telling. The Disney-eque audio visual introductions to Kennedy’s Saturn V rocket and the Space Shuttle Atlantis did an excellent job of communicating the technical challenges faced in developing these ground-breaking items, the drama, excitement, and wonder of going to space, and pride in the achievements of the American space program. At Kennedy, we literally teared up walking into the Saturn V barn after experiencing the nail-biting drama of the introductory film. The only thing that made us come close to tearing up at Space Center Houston was looking at the giant lines of people waiting for the trams to and from the tiny rocket garden that has only three rockets. Sure, one of them is a Saturn V, but still.

One benefit of our visit during the week of Christmas is that we developed a new theory on how Santa can carry so many toys and travel so quickly around the world:

When we originally decided to come through Houston we intended to stay in Galveston at Galveston Island State Park. We’d get more beach time, and Ken would have the pleasure of hearing me hum the Glen Campbell song endlessly. But sadly, the entire beach front side of the park is closed for post-hurricane renovations for two years so an important part of the park would have been unavailable to us. Instead we ended up staying closer to Houston at Brazos Bend State Park. We learned about this park from a couple who volunteered with us at our first Habitat for Humanity Care-A-Vanners job in Colorado and who had served as volunteers here in the winter of 2018-2019. It’s easy to see why Bob and Pam fell in love with the place and raved about it. 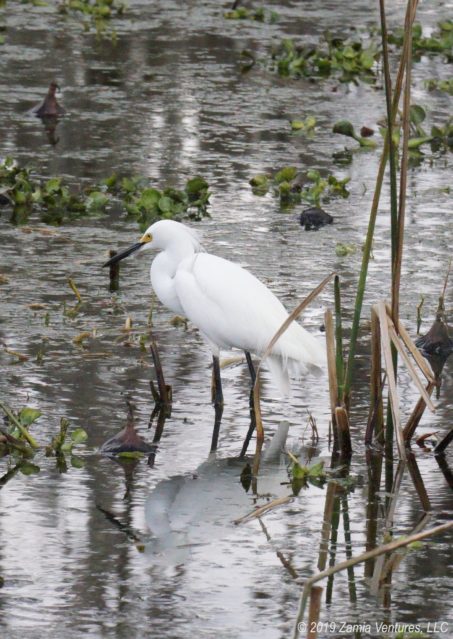 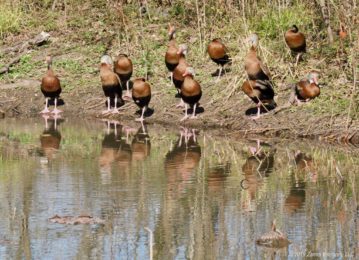 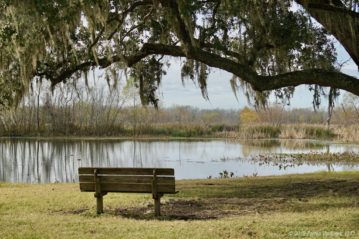 Gator and egret face off 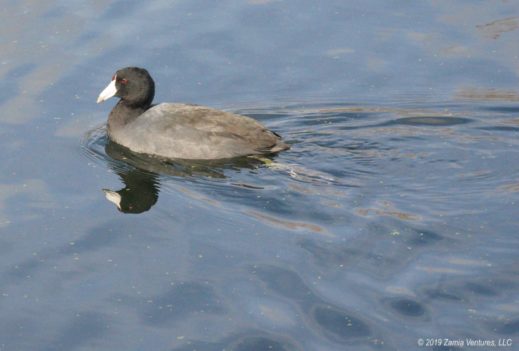 Coot on the move 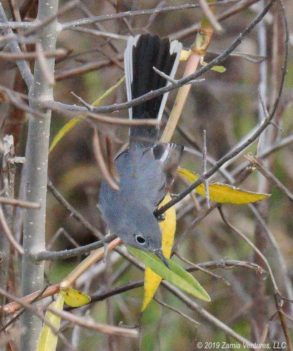 The park has 37 miles of hiking / biking trails winding along lakeshores and through upland forests. The oak trees are dripping with Spanish moss, and the wetlands are packed with wading birds and ducks. The park offers many different bird watching sites ranging from piers and boardwalks over lakes to a 40-foot observation tower. The park is also famous for its alligators, and we loved seeing them lounging around on the lake banks. We hiked, we took way too many photos of birds and alligators, and we reveled in the comfortable warm weather. 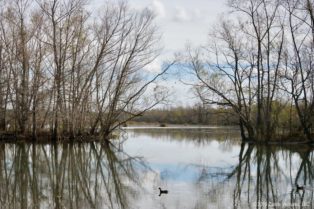 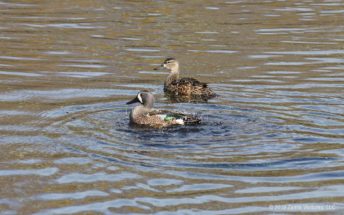 A pair of teals 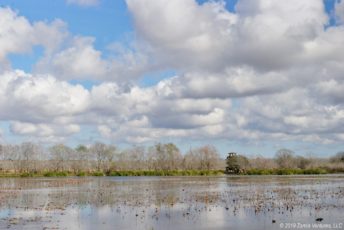 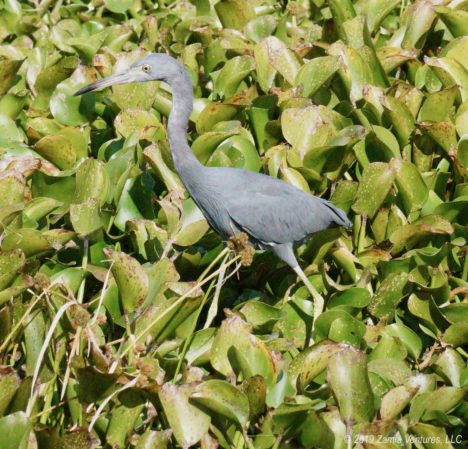 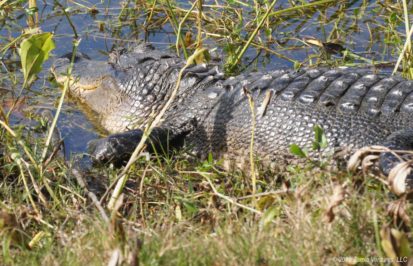 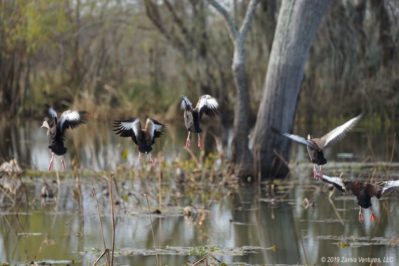 Ducks on the wing

In the campground, sites are nicely spaced out, and even though we could see and hear all our neighbors, having them sitting 20+ yards away gave us a great sense of personal space. Unfortunately we arrived on a Sunday and left on a Saturday, so we didn’t have the chance to visit the park observatory, which is open every Saturday afternoon and evening. Next time! After four enjoyable visits to four excellent parks, we are very impressed by the Texas State Park system. 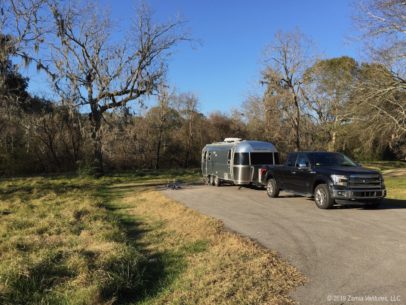 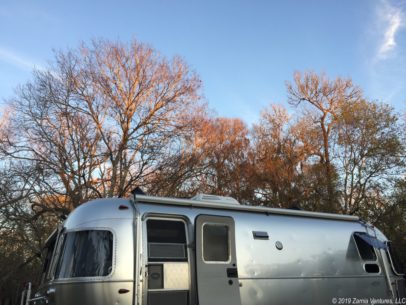 Last Christmas we were at Death Valley, and it took a fair amount of advance planning to figure out the menu and gather all the necessary supplies for a feast before we left the California coast. Here, we were just 25 miles outside of Sugar Land, so a trip to Whole Foods and Costco at the beginning of the week was in order. For our week, we indulged in many kinds of delicious foods, including several recipes of my own making. 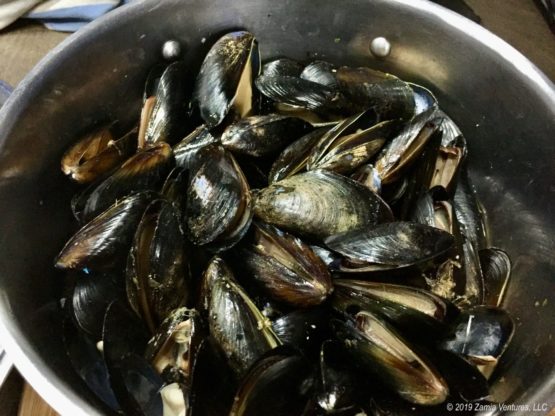 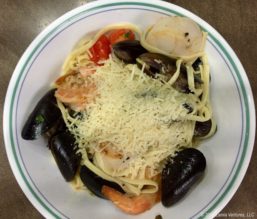 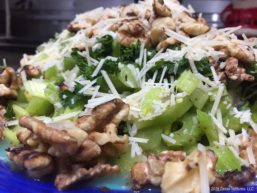 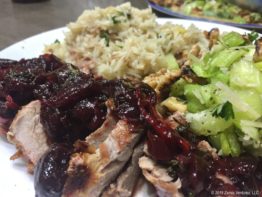 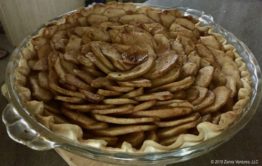 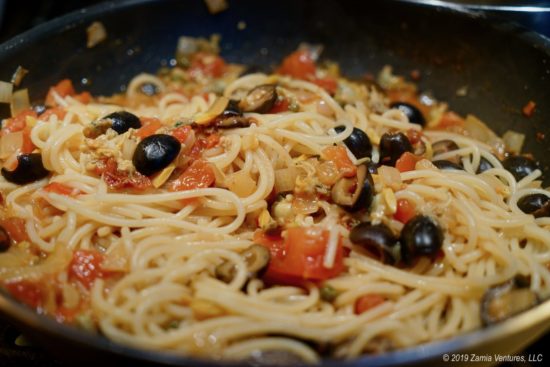 A few of the highlights: a Christmas Eve feast of steamed mussels, then a frutti di mare pasta dish with pan-seared scallops, local shrimp, and mussels but with a buttery lemon caper sauce instead of a tomato sauce. For Christmas day, we chowed on grilled pork tenderloin topped with a sweet-hot sauce of cherries, balsamic vinegar, and Fresno pepper, almond rice pilaf, and celery salad, before finishing off the meal with an open-faced apple pie. Another day we enjoyed my awesome pasta with spicy red clam sauce. We are obviously happy to be back in the world of fresh seafood as well as easy availability of our favorite food vendors (Whole Foods and Costco). We even splurged by drinking wine that comes in a bottle instead of a box. Our Airstream kitchen is very capable, when we have access to good ingredients.

Next: Florida, here we come!!

Geeking Out at Kennedy Space Center

6 thoughts on “Christmas Week in Houston”