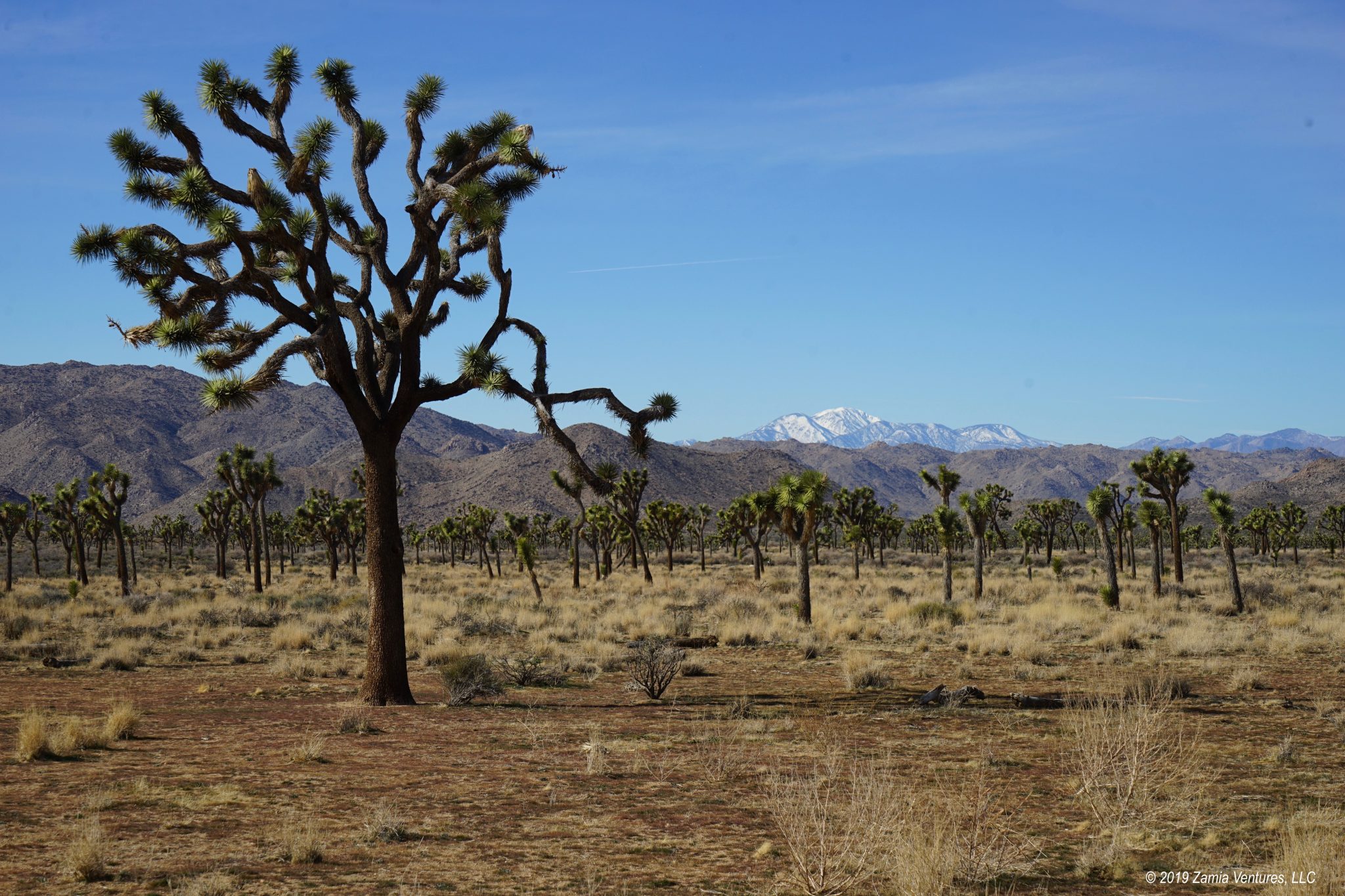 Our visit to Joshua Tree National Park coincided with both the park’s traditional busy season around the winter holidays and the ongoing government shutdown. While this made for more stress in our planning, including finding a new place to camp outside the park when all the campgrounds were closed, we were still able to enjoy many different corners of this large park at the intersection of the Mojave and the Colorado Deserts. I just love desert scenery and Joshua Tree was no exception. To me, the juxtaposition of the rounded and weathered rocks and the spiky, architecturally improbable desert plants makes for a visually appealing scene. 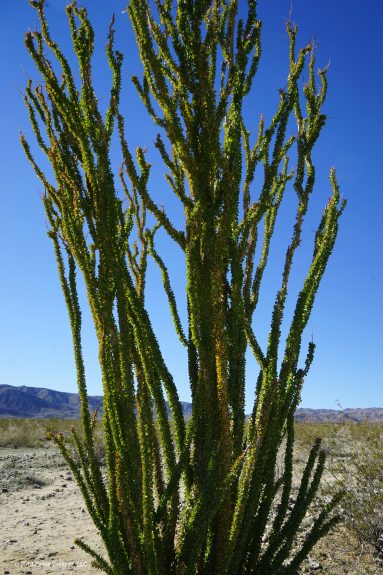 Ocotillo is tall and flush 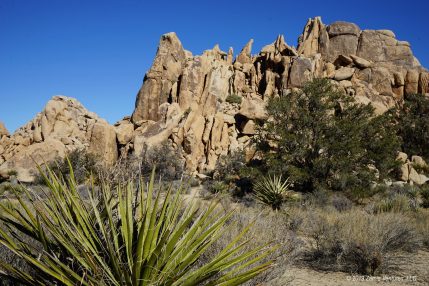 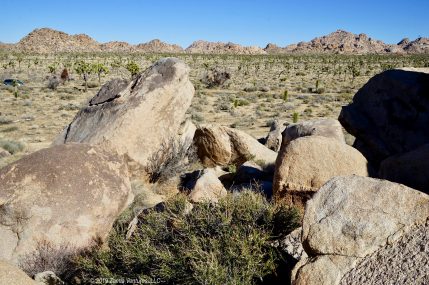 The namesake Joshua trees — which are actually a variety of yucca — are gnarled and ancient, which is always a good starting point for interesting plant photos. They live mostly in the northern and western sections of the park, and are joined on the plains of their Mojave Desert home by their yucca relatives along with a variety of other low-profile arid-land plants. Canyons and mountainsides in the Mojave Desert are home to leafier plants and larger cactus like the formidable barrel cactus. The southeastern portion of the park is within the Colorado Desert, which is populated by a totally different community of plants and animals. Here, there are large areas dominated by chollo cactus and ocotillo, both of which are signature plants of the Sonoran Desert as well. In the strong sunlight, the vicious defensive spines of the cacti take on an iridescent glow. Driving around the park and seeing the two totally different landscapes — though both clearly “desert” — was a remarkable contrast. 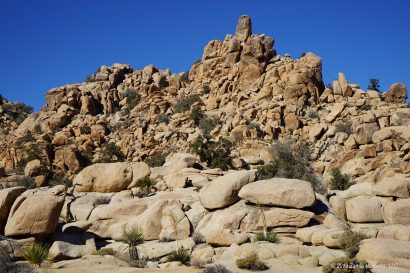 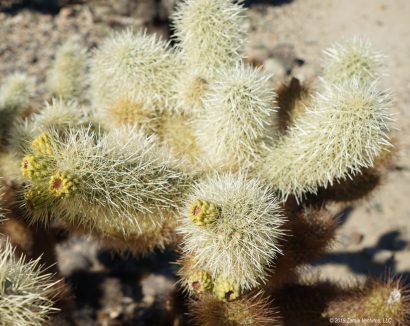 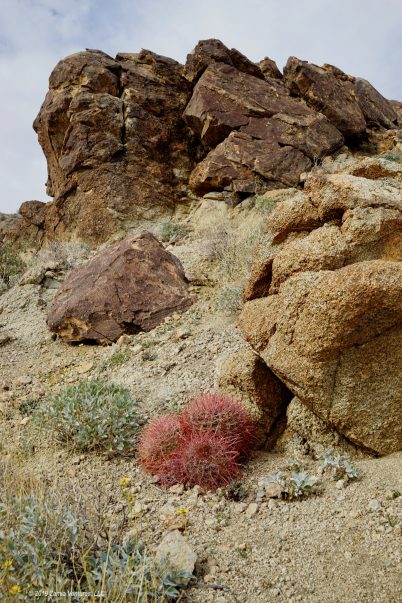 In both deserts, there are oases formed by underground springs. Huge desert fan palms help identify the locations of the springs, which are a major source of freshwater for wildlife like bighorn sheep. We hiked to two of these oases — Cottonwood (via Mastadon Peak Trail) and 49 Palms — and the oases offered all the peace and tranquility the name would suggest. I was actually surprised to discover that palm-filled desert oases actually exist in the U.S., and not just in places with camel trains! 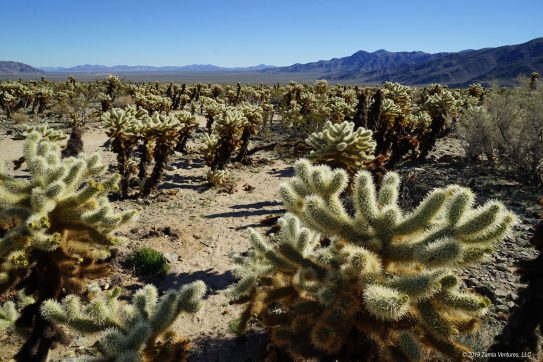 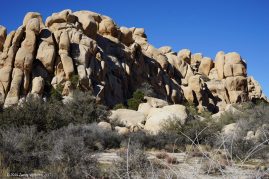 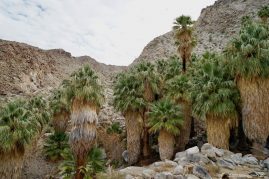 It must have been a relatively wet winter to date, since the desert was just exploding with leafy plants. We were treated to many types and colors of wildflowers, all being grazed by industrious bees. The main illustration of the wet conditions was the fact that the ocotillo were in full leaf. These charming desert plants maintain a stick-like appearance most of the time to conserve water, and only put on leaves when moisture is plentiful. The thick furring of leaves is used to perform as much photosynthesis as possible until drought conditions resume, at which point the plant will drop its leaves and return to dormancy. Unlike deciduous plants that only have one leaf-drop in the fall, the ocotillo can go through this cycle up to five times per year. It’s a fascinating adaptation to life in the desert. 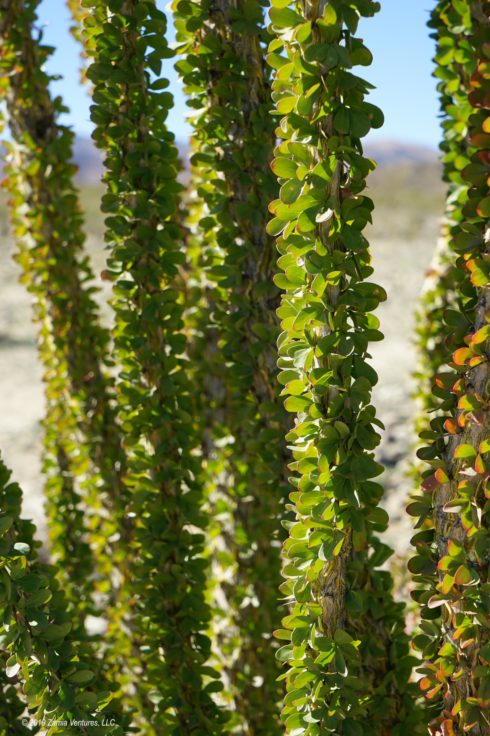 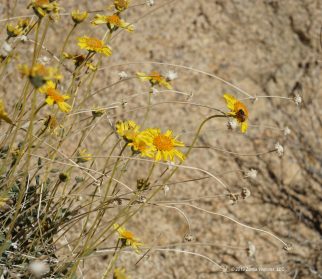 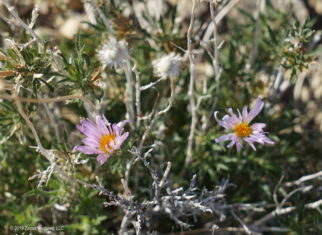 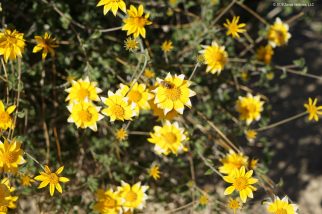 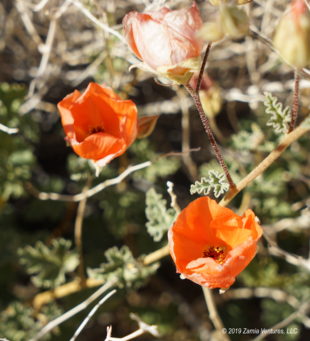 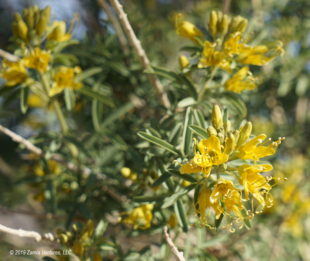 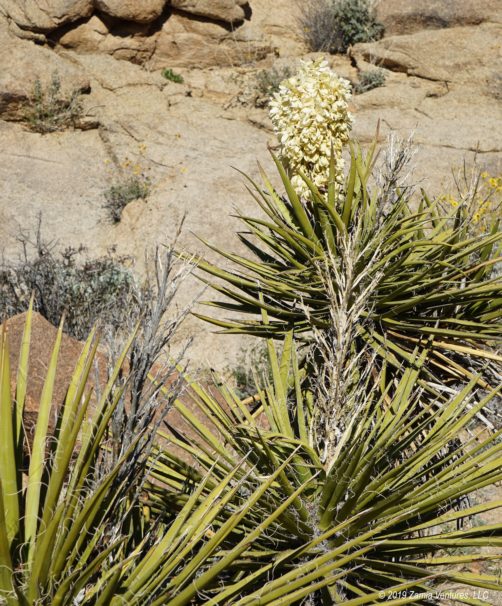 Joshua Tree received a lot of attention in the press for deteriorating conditions during the shutdown. When we initially entered the park, we were half expecting a Mad Max situation, with people driving dune buggies around the desert or digging up Joshua trees to take home. What we found was a lot more tame. Park roads were definitely full of cars and parking lots at the trail heads were quite busy, but the volume of visitors made sense because this is normally the high season for this park, and it’s located within a relatively easy drive for millions of Southern Californians. And even so, the crowds were a tiny fraction of what we encountered at Yellowstone (during normal operations), where people parked haphazardly along roadsides up to a mile away from a point of interest. 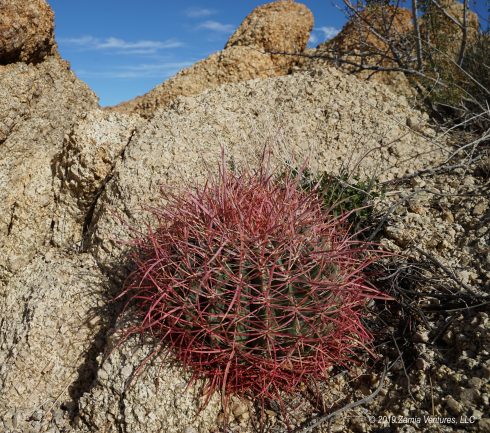 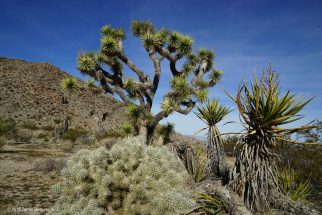 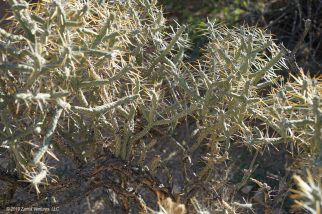 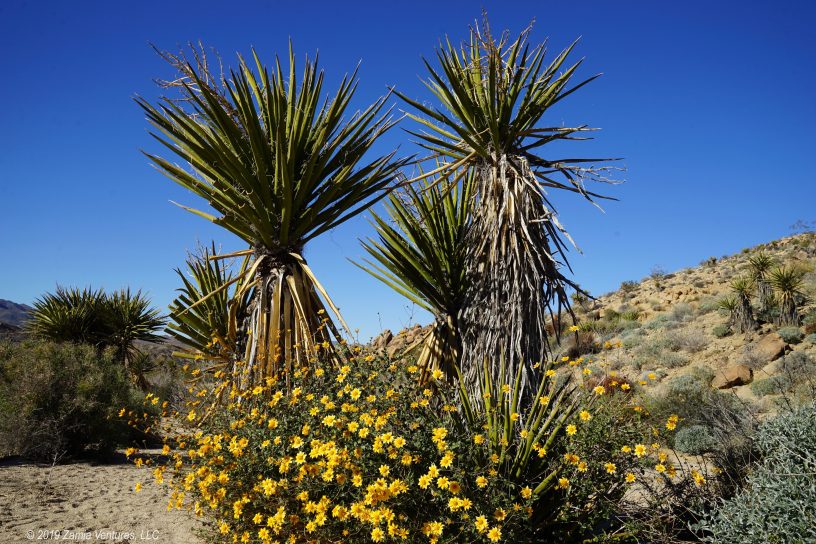 We saw quite a few people climbing rocks, which is one of the big attractions of Joshua Tree National Park. It’s possible some climbers were tackling rocks that are typically off limits, but the climbing activity looked pretty normal to us. My working theory is that places marked on the park map as climbing destinations, and equipped with large parking areas, signs, and toilets, are all fine for climbing! We did see a handful of people on trails with their leashed dogs, which is normally prohibited in national parks to protect wildlife. Trash cans were full and in some cases there were hand-written signs requesting people to take all their trash with them, which we normally do anyway. The vault toilets were definitely full, and accidentally getting downwind from one was an unpleasant surprise. But that’s probably more of a commentary on the fact that the NPS vault toilets are usually extremely clean and virtually odorless. 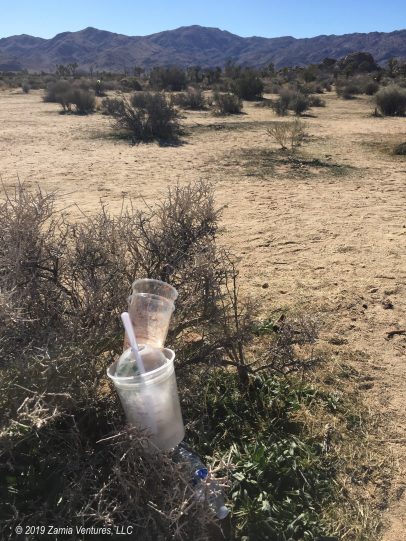 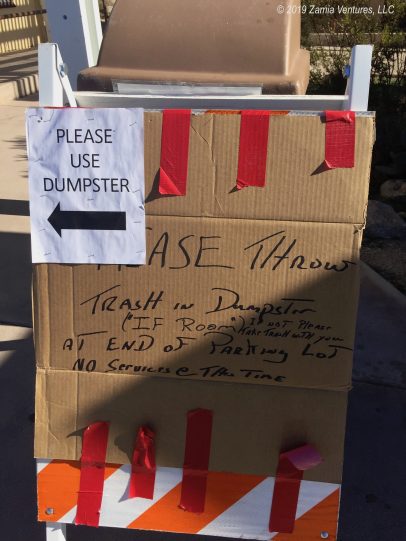 NPS trying to manage the situation 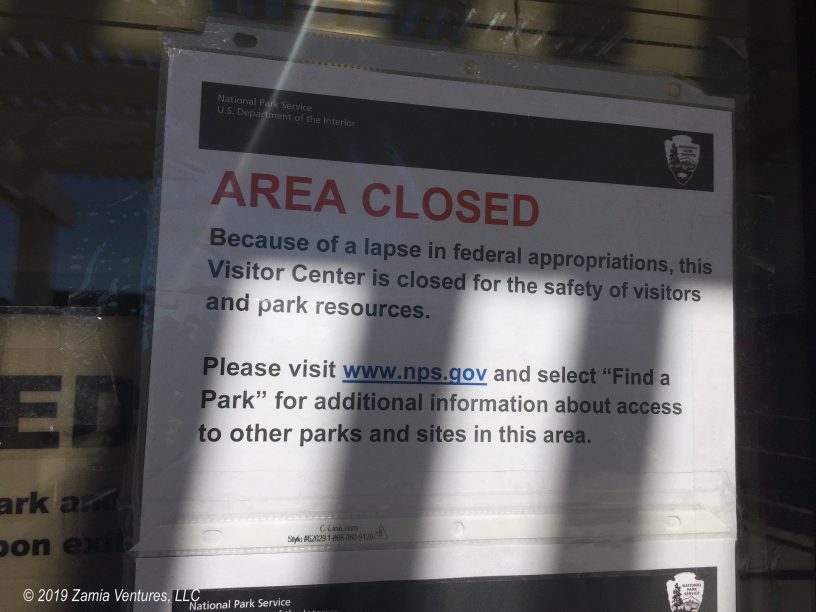 People have been asking us our secret for visiting national parks during the government shutdown without getting arrested or otherwise causing a ruckus. Now, for the first time, we can reveal to the public our patented process for How Not To Be A Jerk In A National Park. It starts with a few simple steps:

What’s even more amazing is that these steps for not being a jackass can be applied year round, not just during government shutdowns! Incredible, I know! Want to find out all the secrets of non-jerkiness? Well, for a low one-time payment of $19.95 (plus shipping and handling, of course) you can receive my exclusive treatise on this topic, “How Not to Be a Jerk at a National Park.” As if that weren’t already an amazing deal, the first 50 callers will also receive, at no additional cost, the eye-opening companion volume “Don’t Be a Ninny at National Monuments.” Better hurry, because this unbelievable offer won’t last! 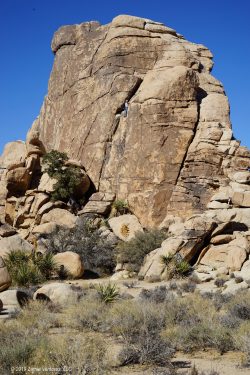 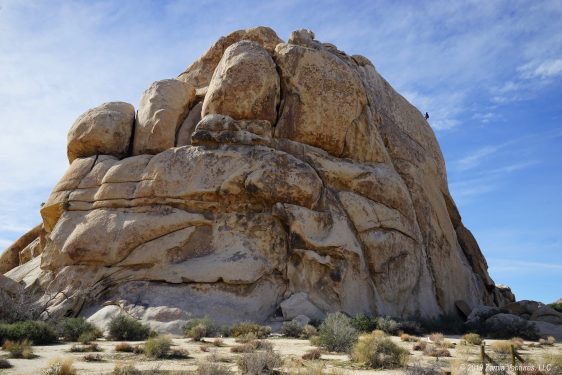 Sorry, you may have noticed that I’ve been watching infomercials. [Separate topic: While camped between the towns of Joshua Tree and Twentynine Palms, we had plenty of over-the-air TV, but all stations were in Spanish, Korean, Vietnamese (maybe?), and/or played all infomercials. Admittedly, we spent some time watching Korean infomercial stations, which was weirdly compelling.]

But the point is, we didn’t feel that we were harming the park by visiting during the shutdown, and here at Joshua Tree we didn’t witness any significant vandalism or other permanent damage to park resources. For the most part, people were not acting like jerks. For us, the biggest effect of the shutdown was not enjoying the benefits of the visitor center. Park rangers are always a fantastic source of information about the best things to see and do in the park, and I love seeing the 20-minute introductory film to set the stage for our visit. With these resources closed, we were left to muddle through using information on the park website and points of interest marked on the park map.

There’s no need to feel sorry for us — we made it through just fine and still had a great time. The people who deserve sympathy are the hardworking NPS staff who are now going unpaid, burning through their savings, worrying about possible damage at the parks, and will be tasked with getting park operations back to normal when the shutdown ends. We hope it ends soon so we can get back to selecting great hikes, not just obsessively checking news sites! 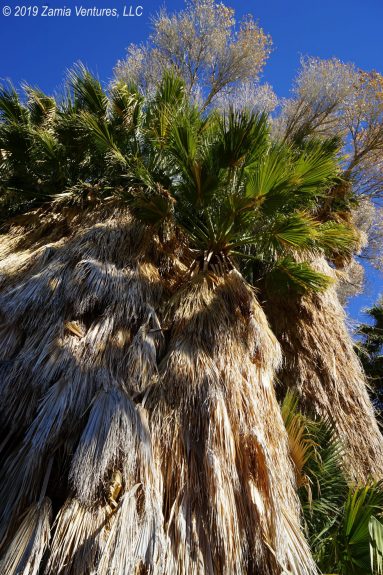 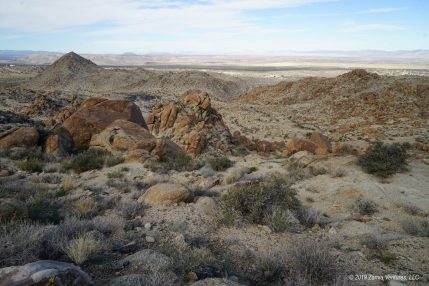 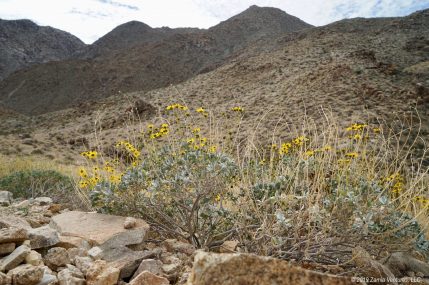 4 thoughts on “Enjoying Joshua Tree NP Despite the Shutdown”