Zamia is a botanical genus that includes one of our very favorite plants, known as coontie. Members of the genus Zamia  are cycads, which means they are part of a family with ancient origins. Unlike flowering plants, which need insects to assist with pollination and reproduction, cycads can be pollinated by wind or splashing water. Cycads existed when all the continents of Earth were joined in Pangea and they were part of the backdrop when dinosaurs roamed the earth (T. rex, not chickens). For more information, check out the Wikipedia entry for genus Zamia.

The people and animals of South Florida have a special relationship with coontie (Zamia floridana), a very unique cycad. These sturdy plants have a graceful fern-like appearance, and grow seeds in impressive cone structures. Most important, they are the sole host plant for the caterpillar of the rare and beautiful atala butterfly (Eumaeus atala).

Atala caterpillars and butterflies feature bright red/orange/yellow coloration that is a common marker of poisonous animals. Indeed, the atala larva are some of the few animals that can consume the leaves of coontie, which contain toxins, because the atala have evolved to ingest and sequester the poison, using it for their own protection. The survival of the atala butterfly is dependent on a relatively abundant supply of coontie for the larvae to consume. 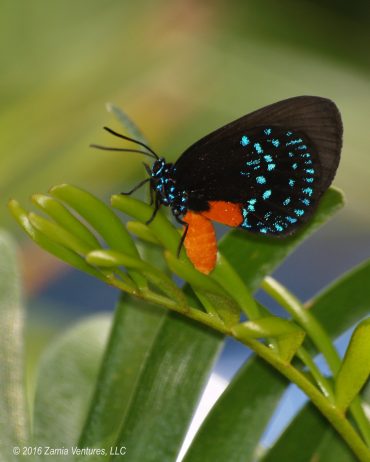 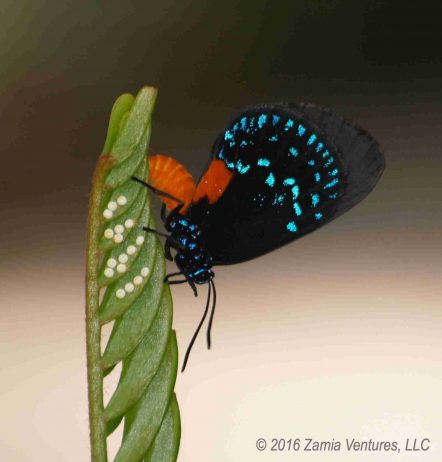 Atala with eggs laid on coontie

Despite the challenges of working with a poisonous plant, native peoples of South Florida learned to harvest and safely process and consume the starchy root of coontie.  Settlers in the 19th century followed their lead and developed an industry producing “arrowroot” as a flour substitute. The heavy harvesting of coontie, combined with the replacement of these native plants with exotic landscape materials in developed areas, led to a dramatic decline in the population of the atala butterfly. The atala was so rare, in fact, that it was believed to be extinct!

However, renewed focus on the use of native plants in the landscape, including the unique and attractive coontie plant, restored habitat for atalas and their population has rebounded. Once a rarity, the blue, black and orange insects are now a common sight in South Florida locations with substantial native landscaping. In fact, all the photos on this page were taken in our suburban back yard, where we loved our coontie plantings despite regularly living with ravenous caterpillars. This UF IFAS fact sheet has photos and more great information about coontie. 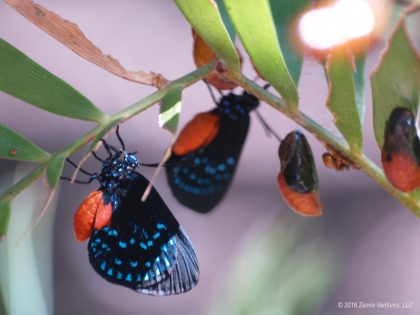 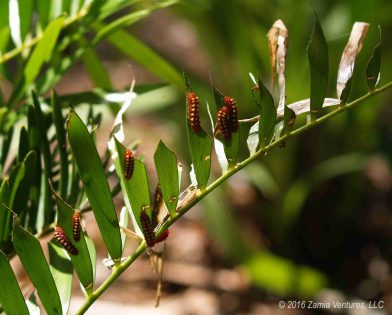 Why do we care?

I love the fact that, during my lifetime, a unique and interesting species — believed to be driven to extinction by human behavior — has been restored as a functioning part of the ecosystem. The rebound of the atala was accomplished through simple measures, including use of native plants in the landscape. Coontie are beautiful and hardy, requiring no irrigation or fertilizer once established, and add an exotic and ancient element of beauty to a Florida garden. At the same time, they help restore shelter and sustenance for a special creature. The small step of resurrecting the atala population gives me a glimmer of hope that other, more serious environmental damage can also be repaired.