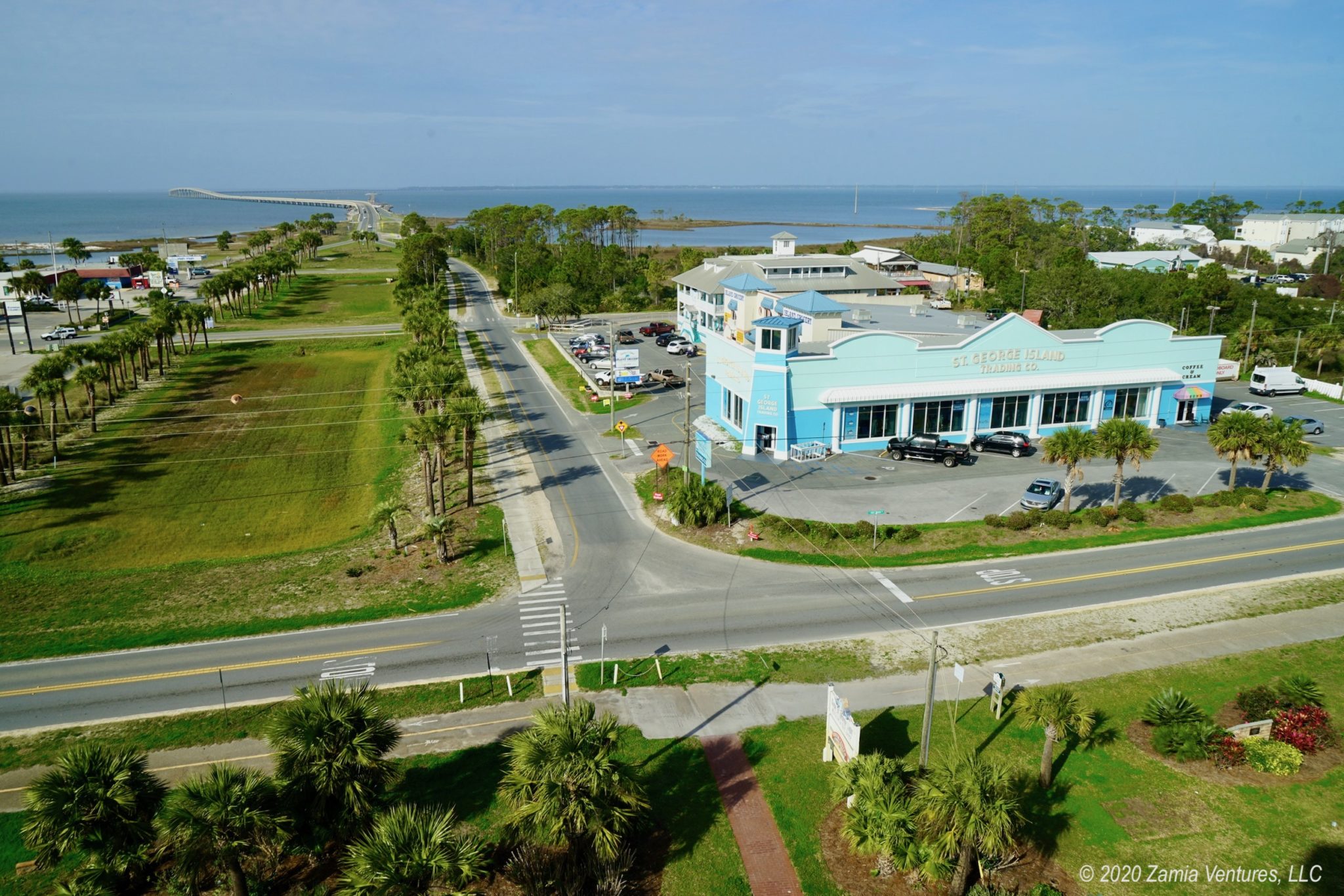 After our beach-intensive stop in Pensacola, we headed further east, skimming the southern edge of Florida’s panhandle along scenic Highway 98. We had not previously visited very much of the panhandle and it was fascinating to see the variety of different communities strung along the lovely coastline. The panhandle beachfront has everything from modest little towns to cheesy tourist traps like Panama City to the upscale community of Destin, which features multiple golf courses and even a Whole Foods! There were also several state parks that looked attractive for future visits.

For us, the most interesting but heartbreaking place along Highway 98 was the area of Mexico Beach and Tyndall Air Force Base, since that was the landfall point for Category 5 Hurricane Michael in October 2018. The pine trees snapped like toothpicks and the wide swaths of flattened forest were expected after such a powerful storm. What was surprising to us was the large amount of debris, damaged homes, and seemingly recent signs of destruction. Everywhere we looked we saw structures with open wounds that were not being addressed. The hurricane hit in October 2018, 15 months ago, but from the debris and lack of repairs we could have easily been convinced that landfall was a mere three months ago. From chatting with locals we understand that many owners are embroiled in disputes over insurance coverage, which is holding up reconstruction. In any case, it will take a long time for this area to rebuild its housing stock and return to any semblance of normalcy. It’s painful to see the remains of a once-charming seaside town and think about all the lives that have been totally disrupted, but as with the destruction of the natural environment we try to be philosophical and see it as an opportunity for renewal. 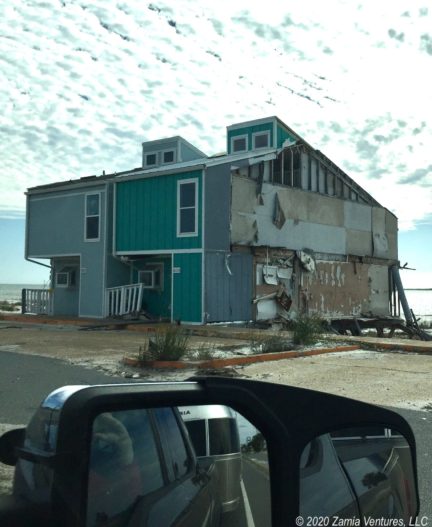 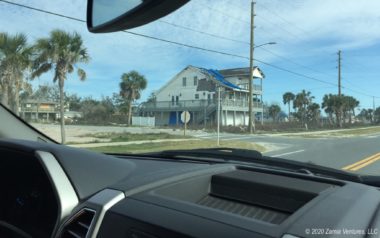 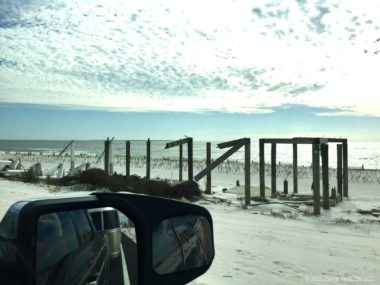 Used to be a house here

Our destination was St. George Island, one of four barrier islands that surround Apalachicola Bay at the end of the quasi-peninsula projecting south from the Florida panhandle. Only two of the barrier islands have roads and all of them contain large areas of protected lands. We really enjoyed our time on the Forgotten Coast during our first visit to St. George Island State Park shortly after we first hit the road in early 2018, and on this return visit we fell a little more in love. This place has it all, including…..

The beaches of Florida’s Gulf Coast are known for their sugary white sand and clear waters, and just like in Pensacola the beaches at St. George lived up to their reputation. Our frequent beach walks in the state park found us ambling down wide, flat beaches with virtually no other people in sight. We had some cloudy, foggy, and rainy days, but at times those clouds were the canvas for the sun to paint dramatic colors. 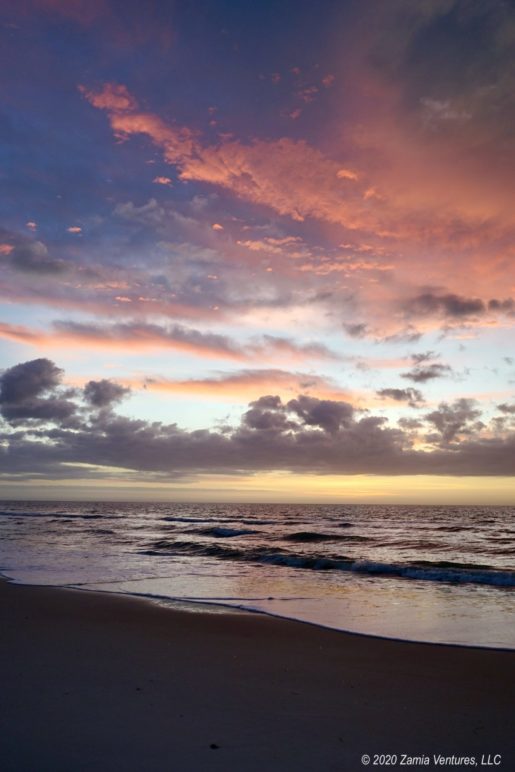 Sunrise over the Gulf 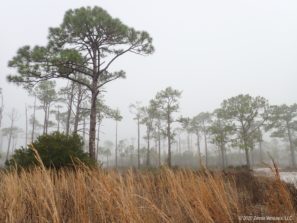 Upland hike in the mist 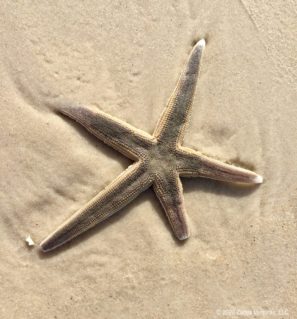 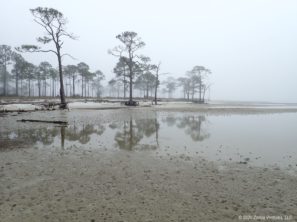 The sights are just as interesting when heading inland. The state park has a very nice upland trail (the trail is about 5 miles out and back, depending on how far one wanders past the primitive campsites) through pine flatlands. I would have liked this trail a lot more if I had realized before heading out that I had a large blister-inducing hole in the bottom of one sock, but it was still nice to stroll through the pines and emerge onto an open water vista on the bay side of the island. Heading on to the mainland, the Apalachicola River has a wide, grassy delta which we were able to experience by walking the short but scenic Scipio Creek Boardwalk, part of the Great Florida Birding Trail.

We also learned more about the ecology of the area by heading to the Apalachicola National Estuarine Research Reserve. This federal property is one of 29 national estuary research centers, and the visitor center does everything possible to celebrate the Apalachicola-Chattahoochee-Flint watershed. There is a film. There are historical displays. There are maps, graphs, and photos galore. There are even tanks with live animals. Estuaries are critical for marine health, since they are the places where land-based nutrients generated by plants and animals enter the water and become available for marine species. There is one reason that estuaries serve as nurseries for the young of countless marine species: those critter babies like their food as much as I do. The script of the introductory film constantly used the word “productive” to describe Apalachicola Bay, but it’s hard to argue with the numbers. Ninety percent of the annual Florida oyster harvest comes from this bay, and the local fishing industry also harvests immense quantities of Gulf shrimp, blue crab, and various finfish. The Apalachicola River Basin is one of the six most biodiverse regions of the United States. ANERR is always carrying out many different types of research on the estuary, including several cool projects led by citizen scientists like one measuring levels of microplastics in the water, and also sponsors hands-on education activities with local schools. I know that environmental field trips in grade school were really impactful in developing my own appreciation for the natural world, so it’s marvelous to see ANERR helping local kids in the same way. 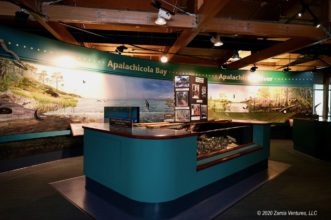 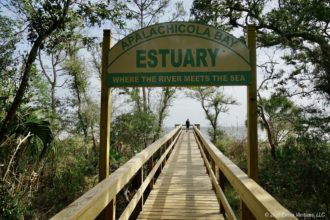 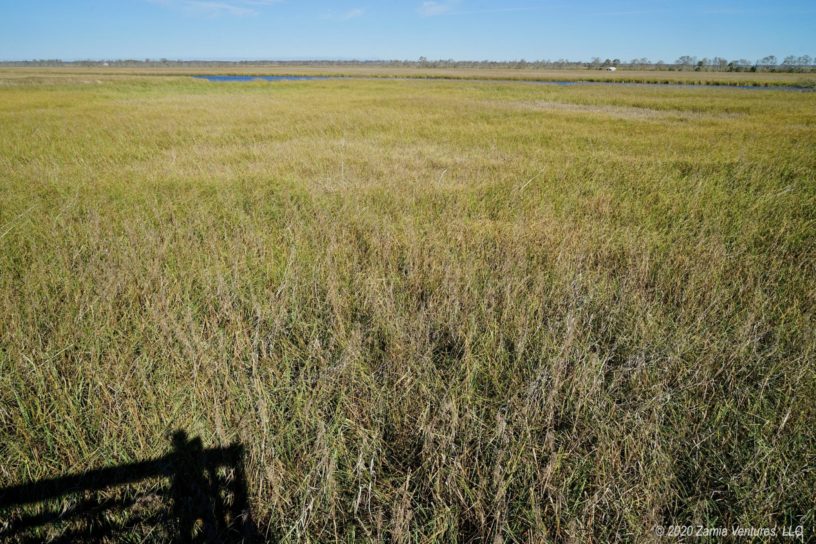 As we learned at the ANERR visitor center, one thing that helps keep the estuary healthy is the large amount of protected land in the immediate vicinity. Coastal ecosystems are preserved in places like the St. Vincent Wildlife Refuge (an entire undeveloped barrier island where endangered red foxes breed!), St. George Island State Park, and Bald Point State Park. The core protections for the river come through the state-owned Apalachicola River Wildlife and Environmental Area and the Apalachicola River Water Management Area. Inland, the Apalachicola National Forest and Tate’s Hell State Forest cover over 800,000 acres of land. All of that undeveloped land provides a home for a wealth of different plants, reptiles, birds, and mammals. The lack of development also means that this little corner of Florida has some of the state’s darkest skies, a precious resource that is hard to come by in this very populous state. We had the chance to appreciate this directly from our campsite when the campground lost power for a few hours one evening. Just removing the light pollution from the lights on the outside of the bathhouses showed us clearly that we were camped beneath the stars. 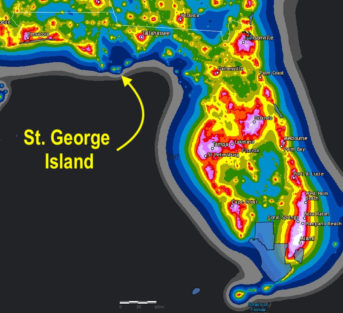 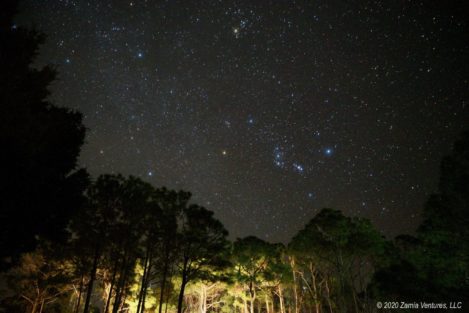 Situated on a bluff at the mouth of the Apalachicola River, the quaint town of Apalachicola boasts almost two hundred years of contemporary history since its incorporation in 1827. On our last visit we enjoyed visiting several state historic sites in town. The Orman House is a beautifully restored example of early 19th century southern architecture, while the Gorrie Museum explains the genius of Dr. John Gorrie, the inventor of air conditioning. It’s no accident that a statue of Dr. Gorrie is one of Florida’s two submissions to Statuary Hall in the U.S. Capitol. This time, we hoped to visit the Apalachicola Maritime Museum, but it was closed for post-hurricane repairs.

We were, however, able to see the Cape St. George Lighthouse. There has been a light on St. George Island since 1833, but in multiple iterations. The initial light was placed at the western tip of the island near the channel from the gulf to the bay, but was not visible to ships approaching from the northeast, so it was disassembled and moved to the southern-most point of the island. That version of the lighthouse was toppled by a hurricane in 1851, but the bricks were retrieved to create a new light on slightly higher ground. That lighthouse was undermined by Hurricanes Opel and Georges, before collapsing in 2005. A phalanx of volunteers retrieved the bricks from the sea and painstakingly cleaned them. Over 20,000 of those original bricks were used to create the current version of the lighthouse, which opened in 2008 and is now the centerpiece of the entry to St. George Island and a fun place to climb even though it is no longer a functioning lighthouse (the light was decommissioned in 1994). 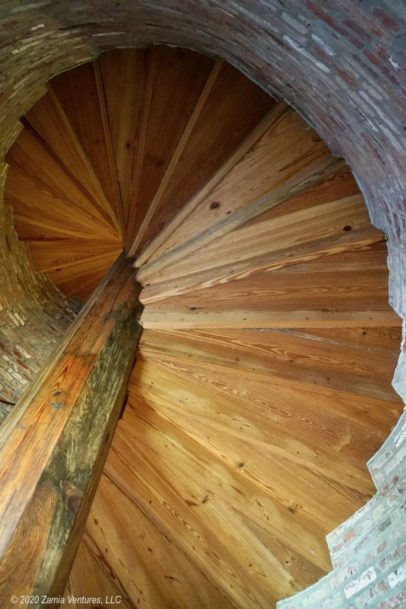 Stairs in the historic light 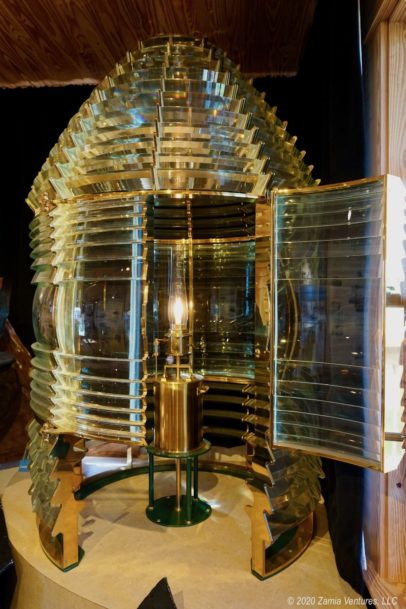 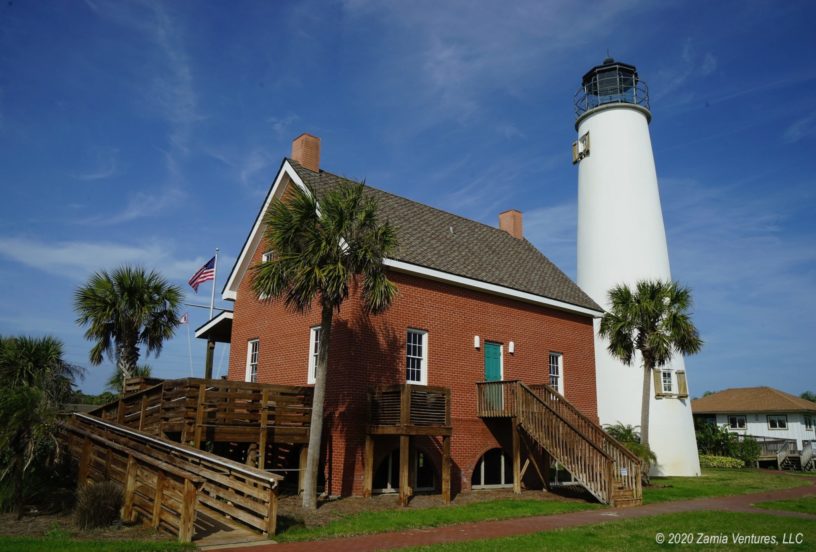 Even though Franklin County is the third least-populous county in the state of Florida, we actually know people with ties here. Fellow travelers and bloggers Laurel and Eric (AKA Raven and Chickadee) have visited the Apalachicola area every winter for years because her parents lived here after their retirement. This is a fantastic place to spend time in the winter, and being able to help out the parents as they aged while moochdocking in the driveway really worked well for several years. Unfortunately, as Laurel has detailed on her blog, her parents are no longer able to live on their own and have moved to assisted living. This year their visit will consist mostly of cleaning out closets and disposing of furniture, clothing, and other household goods. Having gone through the same process ourselves, we spent a lot of time commiserating about dealing with aging parents and life on the road, while sharing a lot of laughs.

We have mostly interacted with Raven and Chickadee online, and hanging out in person was a welcome change that added an “IRL” dimension to the friendship. Plus, we learned things. For instance, we learned that while they talk a good game about oyster roasting, their skills actually lie in the area of building a roaring fire that kept us toasty on a chilly evening….. which was not ideal for the oysters. It was great fun, but then again I don’t mind a heavy char on grilled food. 🙂 And their shrimp grilling was on point, with unbelievably delicious results (consumed too quickly for photos). A follow up meeting was in order, and even more fun was had taste testing at the excellent local brewery. We were pleased to find that the offerings at Oyster City Brewing have only gotten broader and better since our last visit. This was yet another reminder that we have met some truly awesome people on the road, and the only negative is that our interactions with fellow travelers are usually so brief. 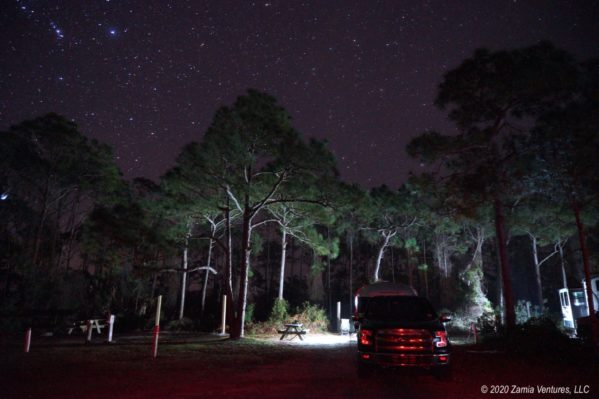 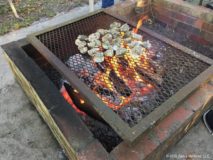 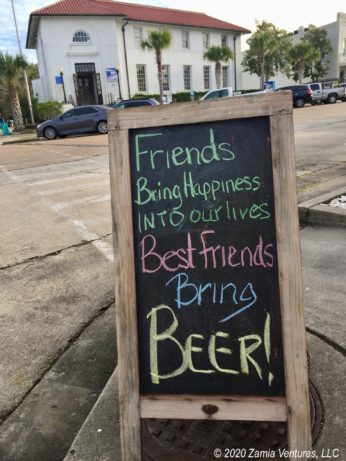 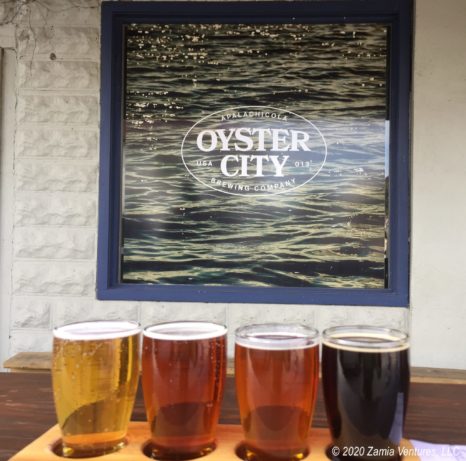 One flight of beer 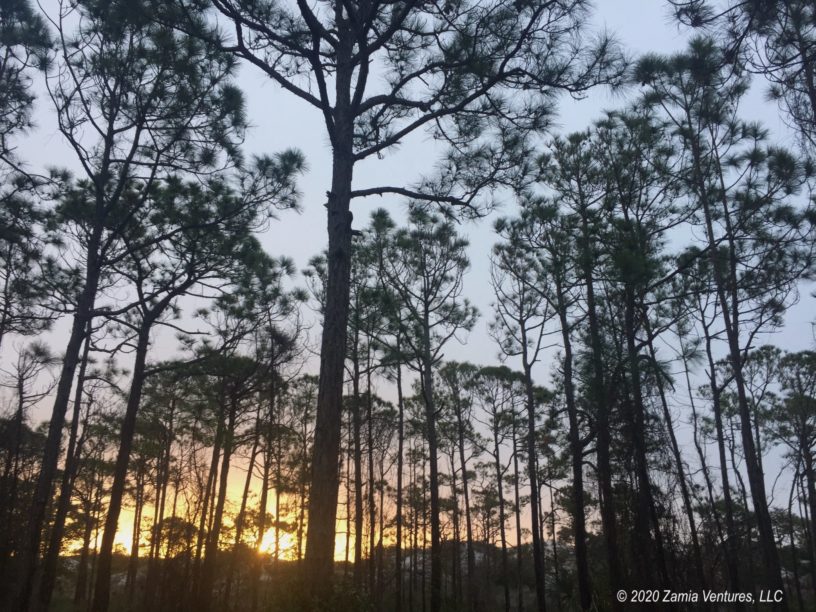 During our stay we camped at the lovely St. George Island State Park. The beaches, the upland areas, the frequent wildlife sightings, and the well-maintained bathhouses were all just as we remembered from our visit two years ago, so needless to say we enjoyed the experience.

We think this area is really special and we are already planning a return visit in the winter of 2020-2021 for a longer stay. Next up: we start our trek down the long peninsula and head toward the Tampa Bay area.

8 thoughts on “Digging the Island Vibes on St. George Island”