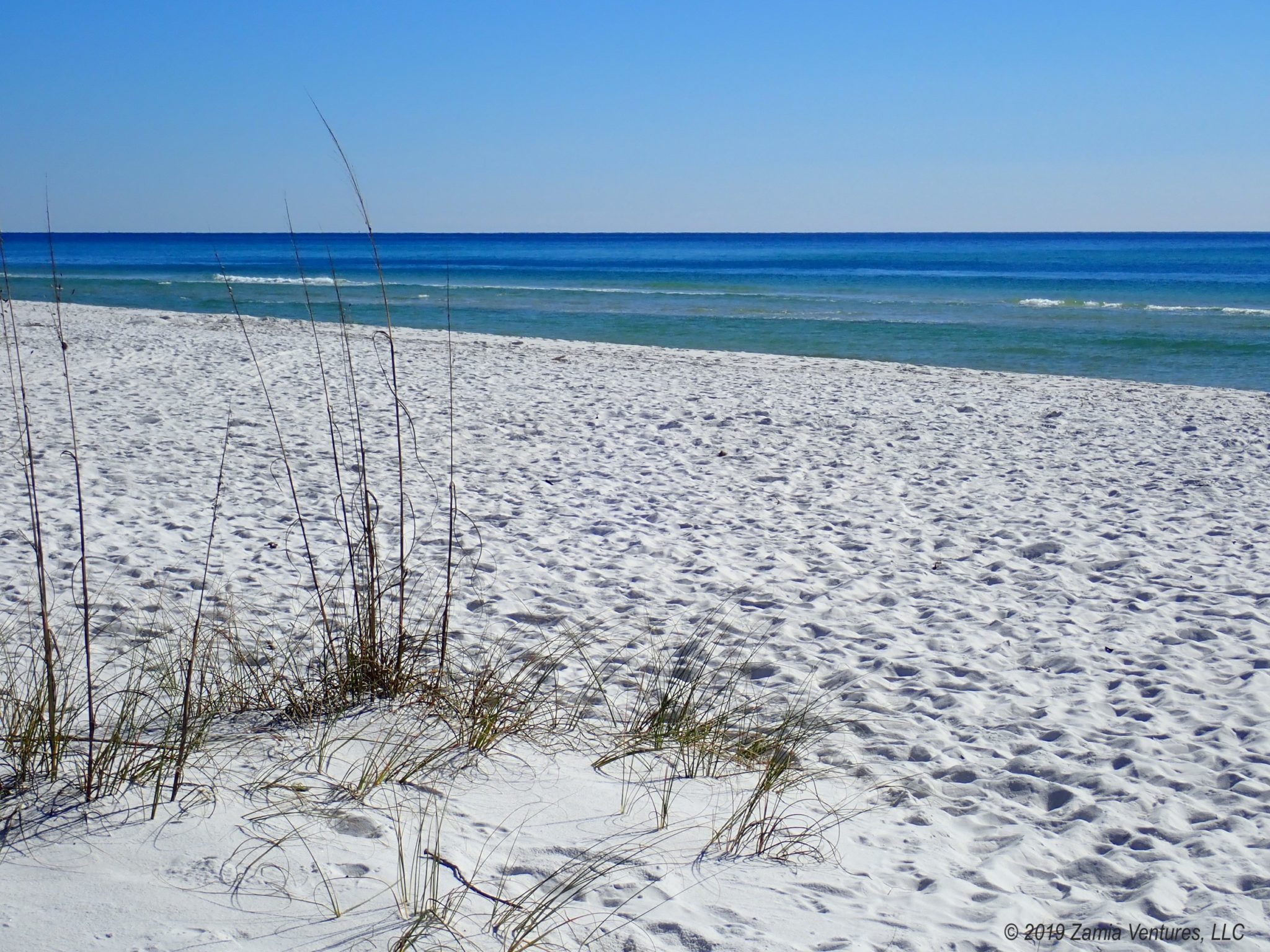 After our Houston stay we were determined to get to Florida as quickly as possible, so we traveled the 600 miles from Brazos Bend to our next spot in Pensacola in two consecutive days of travel. We had heard horror stories from fellow travelers about the condition of I-10 between Beaumont, TX and Baton Rouge, LA, and it’s always annoying to be dealing with semis and cars that want to drive 75 mph on the interstates, so we avoided that route. Instead we ran parallel to it on Highways 12 and 190, cruising at a steady 55-60 mph on a well-maintained road through the heart of Cajun country. We passed through a few small towns, but most of our scenery was vast areas of rice fields punctuated with large rice drying buildings. Our route included a long causeway across the Atchafalaya Swamp, which is a critical part of the massive Morganza Spillway flood control system built by the Army Corps of Engineers to divert water from the Mississippi during major flood events and also to prevent the Mississippi from changing course (and bypassing important ports like Baton Rouge and New Orleans). Overall it was a fairly scenic experience of the landscape of southern Louisiana, not just bland interstate views, and a perfect illustration of why we like to avoid the interstates and take smaller roads when possible.

We stopped overnight east of Baton Rouge, and our visit coincided with hometown LSU’s Peach Bowl victory. When we first pulled into our campground for the evening, it was unnerving to hear the periodic sounds of shotguns or explosions close by. Then we realized that a neighbor was setting off a fireworks cannon every time LSU scored in the game, which they did with alarming frequency. 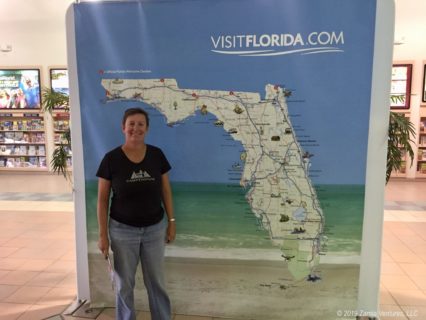 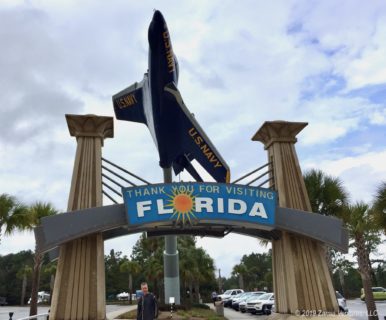 On our way into the state we stopped at the Florida Welcome Center to take dorky photos under the sign and reminisce about the halcyon days before the financial crisis when those welcome centers handed out free orange juice. That last one was just me, actually. We even picked up a bunch of maps and brochures! While it might seem strange to get tourist information for a place we lived for years, we are looking forward to viewing our home state with fresh eyes after spending almost two years away in places that are completely different.

For our stay in Pensacola, we camped at Fort Pickens Campground on Santa Rosa Island at the Gulf Islands National Seashore. We were in the popular Loop A, in a very nice site with trees on one side and a large empty space on the other side, and just across the main park road from the beach. When the surf was up we could hear the sound of the waves in our rig, so you already know we loved the location. Even better, this is one of the very few national park service campgrounds that offers hookups (electricity and water) and has a full bathhouse with flush toilets, showers, and even laundry machines. Normally national park campgrounds feature no hookup dry camping, and the few showers we’ve seen were either totally unusable (I’m looking at you, Pinnacles NP) or part of a paid concession and located somewhere that requires driving from the campground (like the Yellowstone Canyon area). We were so delighted with the relatively luxurious amenities that Ken did laundry twice. 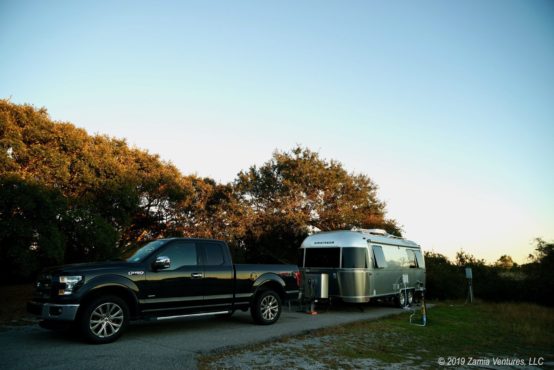 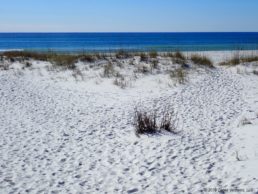 Just look at that water! 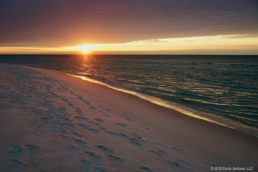 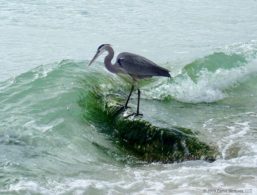 Blue heron intent on a snack 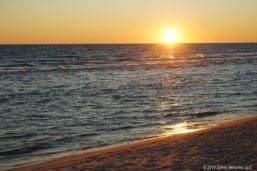 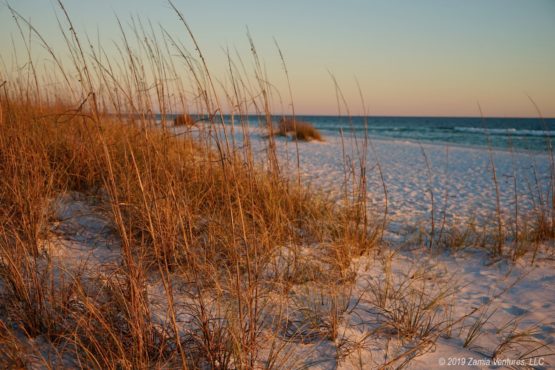 Of course, the whole reason this area is a national park is to preserve the pristine beaches, and the natural beauty of this place is staggering.  The Gulf Islands are famous for their sugary white sand complemented by clear water, and we never got tired of taking in the scenery. Beach walks were a daily ritual; since we were in the middle of miles of protected shoreline the only question was which direction to walk.

We watched pelicans soaring and diving and floating. We watched dolphins meandering along the coast. We kept an eye out for the adolescent bald eagle that hung around two nests high in the snag just behind the campground. We marveled at the clarity of the water as it lapped against our ankles. We took too many photos featuring the white dunes, the water that looked impossibly aquamarine in the sun, and the cerulean skies. We also enjoyed lovely pink, red, and gold sunrises and sunsets, and since the sun is in the south in winter we could see both the rise and set of our very favorite star over the water from our beach. 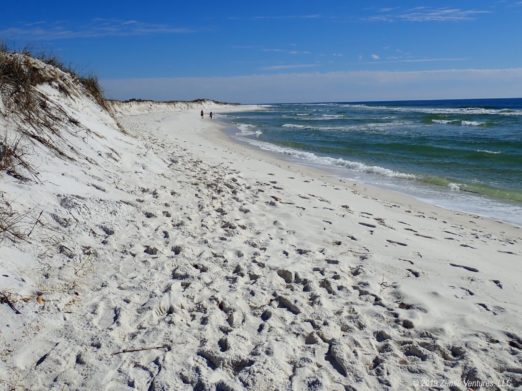 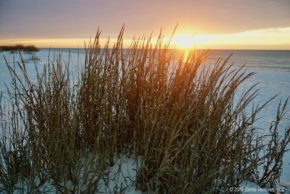 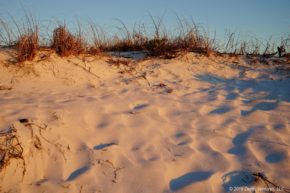 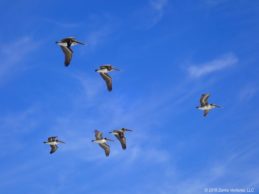 Pelicans on the wing 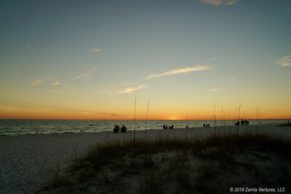 Fellow campers say adieu to 2019 on the beach 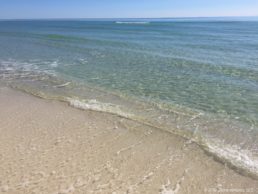 The water is incredibly clear

Like Padre Island National Seashore, Pensacola Beach and the rest of the Florida Gulf Coast are mainly a summer destination, so like at Padre Island we mostly had the beach to ourselves. It’s hard to believe that people don’t mob this place in winter. Sunny days with air and water temperatures in the mid-60s in January are the ultimate Chamber of Commerce weather, if you ask us.

The main historical feature of the Fort Pickens section of Gulf Islands National Seashore is, you guessed it, Fort Pickens. The 19th century masonry fort is located about 2 miles from the campground, and can be reached by walking on an upland trail that is the uppermost reach of the Florida National Scenic Trail, or by walking up the beach. We did both. 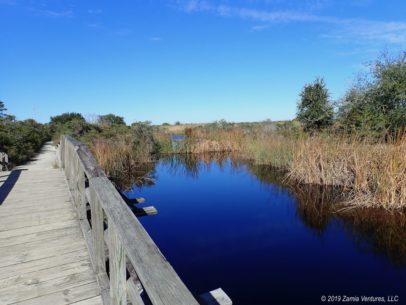 Upland pond along the Florida Trail 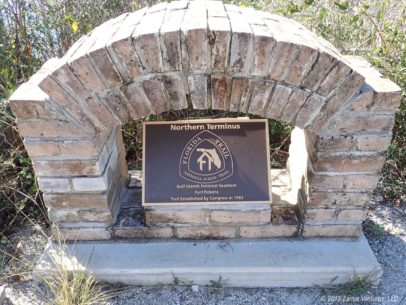 Fort Pickens was part of a system of coastal defenses constructed after the War of 1812 which included the far more famous Fort Sumter in Charleston and Fort Jefferson in the Dry Tortugas, among others. The fort brochure does a good job of succinctly explaining the theory behind the system:

“Up until World War II, ‘homeland security’ meant ‘harbor defense.’ Before airplanes and missiles, any attack on the United States required capturing harbors to unload armies and supplies. Protecting the harbors protected the country.”

The harbor forts were both a key element of the federal control of the nation’s perimeters and a symbol of federal power, so it’s no wonder that one of these forts (Fort Sumter) became the first flashpoint in the Civil War. Confederate forces were obviously keen on gaining control of the harbors, so attacks were initiated against most of these forts early in the war. Despite bombardment from the Pensacola mainland in late 1861 through early 1862, Fort Pickens was one of only four southern forts to remain in Union hands throughout the Civil War. 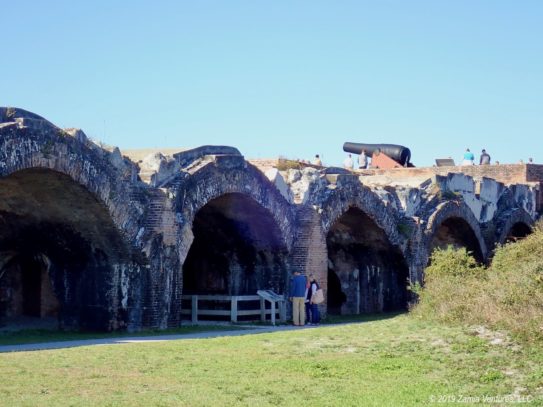 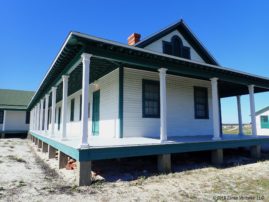 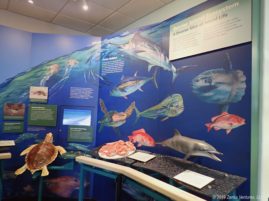 The displays at the “discovery center” near the fort — it’s not a full-fledged visitor center — were really well done and covered everything from the geologic origin of the white sand beaches to the history of the fort and the process of designating the area as protected federal land. The displays were nicely accessible, with lots of audio support, braille, and raised/textured displays that can be enjoyed by the visually impaired. We appreciate it when our public parks make an effort to be accessible to all visitors, including those with disabilities.

We also appreciated that the park brochure about the fort handled some of the less noble aspects of the fort’s history with sensitivity. The park is forthright about the fact that the fort was built by enslaved people who were of course not paid for their work (their owners were paid). It also recounts the use of the fort in the late 19th century as a prison for Apache prisoners of war, notably Geronimo, and the fact that the “high risk” men were separated from their wives and families and basically used as zoo animals for people to gawk at. It was worth standing in line at the busy bookstore to get a (free) copy of the fort interpretive brochure; without the brochure we had trouble understanding what we were seeing.

Unfortunately we weren’t able to visit several of the sights of Pensacola that have long been on our itinerary. At the time of our visit the Pensacola Naval Air Station was closed to any visitors without Department of Defense ID, because of the shooting in December 2019, so we civilians were unable to visit the National Naval Aviation Museum, the Fort Barracas portion of the Gulf Islands National Seashore, or the historic Pensacola Lighthouse. The Blue Angels are based in Pensacola, and watching them practice can be another highlight of a visit to the airbase, but the team doesn’t practice here in January or February. I also intended at some point to visit the Archaeology Institute at the University of West Florida but it never quite fit into our schedule. The campground is located out at the very tip of Santa Rosa Island, which meant that a trip to the Publix in Gulf Breeze was a half-hour commute and getting into Pensacola proper was more like a 40-minute drive. Our enjoyment of the beach obviously made us lazy, because we only made a few trips out of the park during our stay.

Many of the reviews of our campground on Campendium mentioned the excellent seafood at Peg Leg Pete’s, a pirate-themed place in Pensacola Beach that is the closest restaurant. We love casual seafood shacks as a rule, and a kitschy theme is a plus, but the seafood is the main attraction.  At Peg Leg’s the oysters, steamed shrimp, and grouper sandwiches did not disappoint. 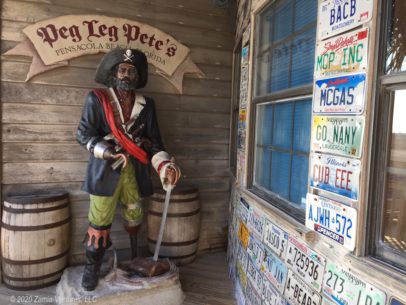 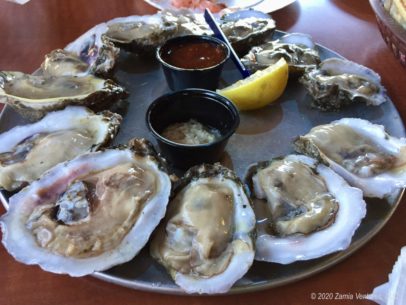 We also spent an afternoon getting a personalized tour of downtown Pensacola from fellow Airstreamers Jay and Robin, a couple we met in Santa Fe in 2019. We had a terrific lunch in their home — a historic commercial building that they have transformed into an ultra-cool industrial loft-style residence — and enjoyed giving attention to their two gorgeous rescue sighthounds (one greyhound and one saluki). After lunch we did a little walking tour around downtown to check out the lovely shaded squares, historic structures, civic buildings, and museums. Pensacola is the oldest European settlement in the U.S., predating St. Augustine by six years, but it was abandoned by the Spanish after a hurricane and not re-established for 137 years, so St. Augustine wins the crown for oldest continuously-occupied European city. Pensacola is also a City of Five Flags, having been governed by Spain, France, Great Britain, the Confederacy, and the United States. All that history makes for a compelling downtown, a walkable area filled with both old and new buildings rubbing shoulders. While the architecture was nice, the primary destination of our walk was one of several breweries in the downtown. Pensacola Bay Brewery makes good beer in a wide range of styles, as we can confirm from our sample flight of eight different beers. Getting an insider perspective on the city was a real treat since we so often feel like complete strangers in the places we visit. Jay and Robin’s enthusiasm for their hometown was infectious, and we have plenty of additional spots to visit the next time we are in the area. 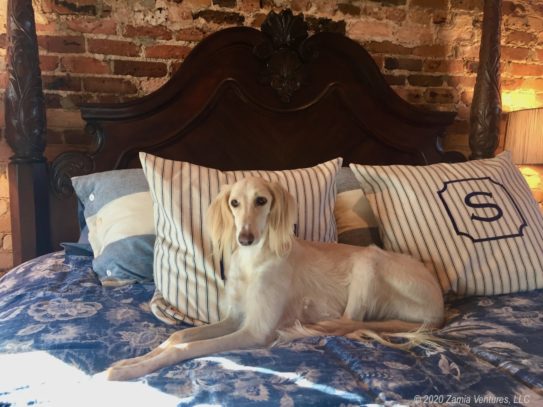 I’m not sure what “not allowed on the bed” means 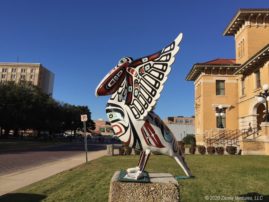 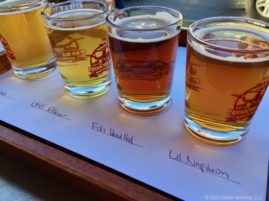 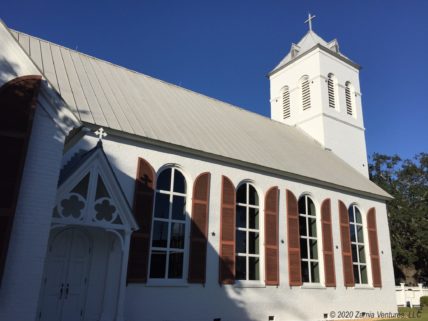 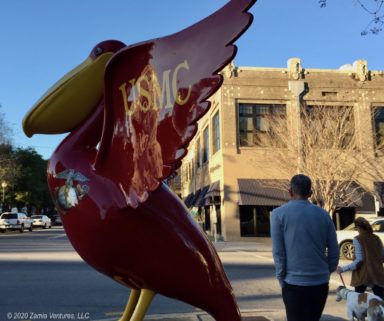 So, are we tired of white sand beaches and crystal clear water? Nope. Which is a good thing, because next we head east to St. George Island for even more beach time.

8 thoughts on “Dashing Into Florida to Visit Pensacola”