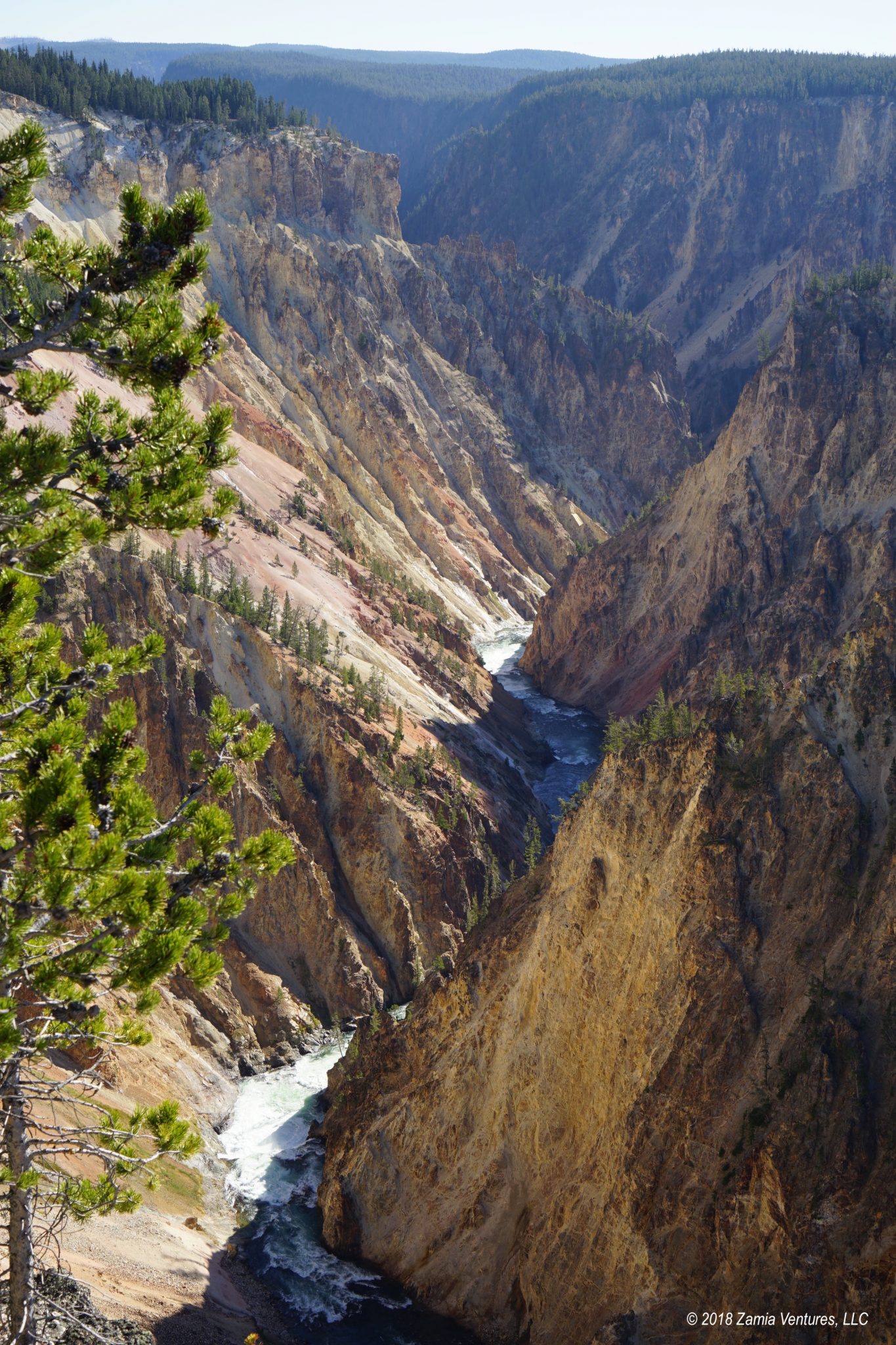 The focus of our final stop in Yellowstone was the Grand Canyon area, where the Yellowstone River has carved a deep gorge through relatively soft volcanic rock. The centerpiece of the canyon is the set of waterfalls – Upper and Lower – that send unbelievable amounts of crystal-clear water thundering down the deep canyon.

The volcanic (rhyolitic) rock through which the river runs is full of different minerals created in the intense heat of the earth’s interior, so the sides of the canyon are streaked with bright colors. The canyon area is also thermally active, with relatively frequent earthquakes contributing to landslides which help maintain the rugged appearance of the cliffs and towers that line the sides of the canyon. 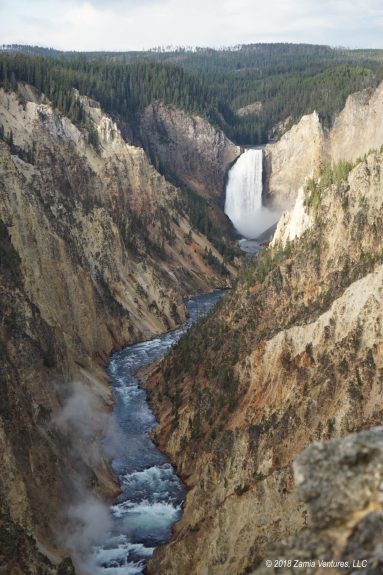 The huge lower falls as seen from Artist Point 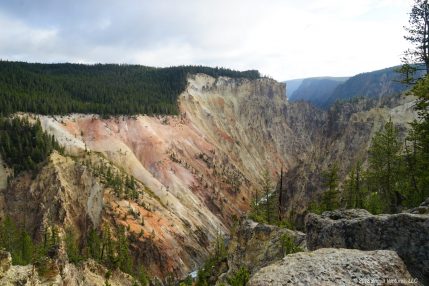 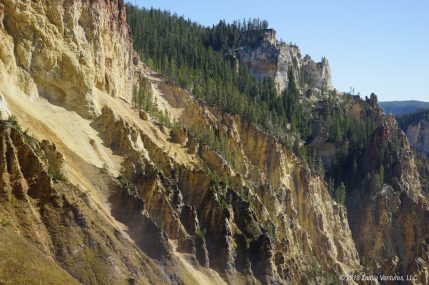 Golden hues dominate in portions of the canyon

It is a dramatic and remarkable landscape that has captivated artists since the earliest days of the park. The Canyon Visitor Center has a nice gallery showing reproductions of artwork depicting the canyon, and we enjoyed seeing the same impressive subject interpreted in a number of different styles and moods.

We visited both the north and south rims, taking several of the hiking trails along the rims. As usual, there were few people on the trails between the major overlook points, but throngs of visitors at those famous overlooks. We enjoyed several hikes down into the canyon, since they brought us to the upper brink of the falls and to viewpoints directly in front of the falls. Hiking up out of the canyon was less fun, of course, but we’ve definitely improved our conditioning this summer, especially with respect to hiking at elevation. 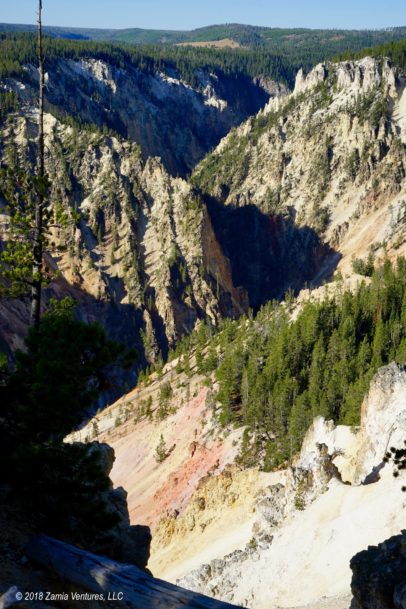 Look at that deep groove in the earth! 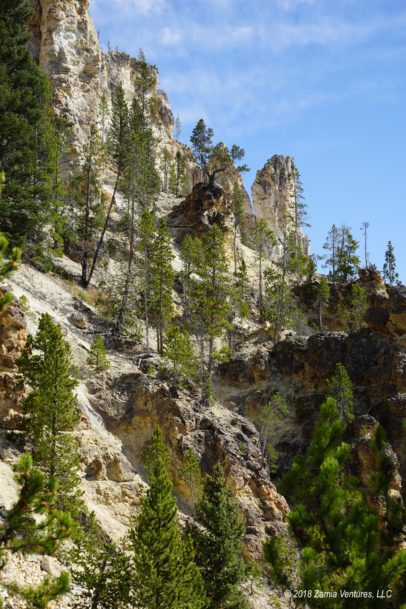 The Grand Canyon of the Yellowstone is so remarkable that it would probably merit its own park, similar to the Black Canyon of the Gunnison, if it were not already part of our first national park! The Grand Canyon has the most impressive, but far from the only, waterfall in the park. In the course of our stay we also visited Fairy Falls, Mystic Falls, Wraith Falls, and Tower Fall, plus countless smaller cascades, rivers, and creeks. These water features are yet another notable aspect of Yellowstone, since we understand from rangers that they cover the gamut of all different classifications of waterfalls.

Tower Fall gets its name from the formations around the brink 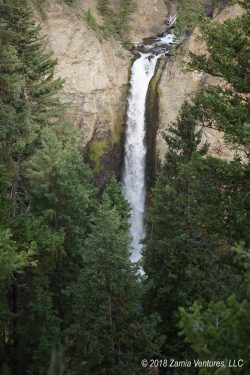 Staying at the campground at Canyon Village put us within easy reach of the numerous services in Canyon Village, including several necessary things like gas and laundry. Our heavily wooded campsite had excellent privacy and felt pretty remote, despite the proximity to services, but thanks to the trees there was no way to generate enough solar power so we had to break out the generator every day to keep our batteries charged. This was even more critical because we encountered our first snow and “wintry mix” of the fall during our stay at Canyon. When it’s 40 degrees outside at noon, you can bet we are going to be running our furnace and stressing out our batteries.

Our sojourn in Yellowstone of nearly three weeks allowed us to explore many different parts of this huge and diverse park on a reasonable schedule. It’s hard to believe that the otherworldly thermal features, elk-infested sage lands, broad grasslands, towering mountain ranges, and dramatic canyon are all part of the same remarkable place.

A ranger we talked with at the Madison information station told us that the park was designed to accommodate 2 million visitors per year, and for the last several years it has received 4-4.5 million visitors per year. Based on the huge throngs we encountered at the popular spots, I believe it. While we were able to easily escape the masses by hitting the hiking trails, I found it somewhat draining to force ourselves out of the house early every morning in sub-freezing temperatures in order to secure parking spots at popular overlooks or thermal features. We generally completed our “tourist” activities by 9:30 a.m. and our hikes by early afternoon, and at that point we were more than ready to return home and hang out at the campground, reading or just people watching. I have no idea how people have the energy to spend 10+ continuous hours touring the park, especially when fighting the crowds and traffic at their various stops. 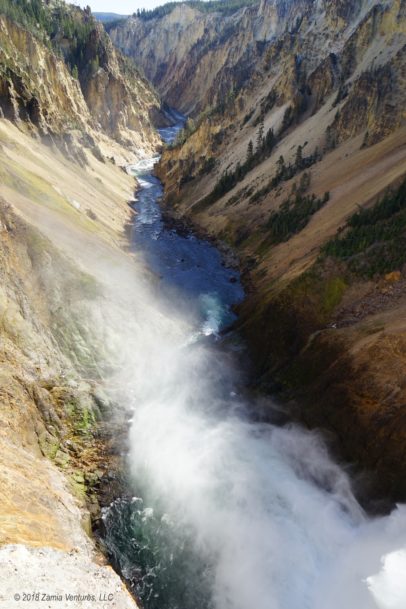 View from the brink of the Lower Falls 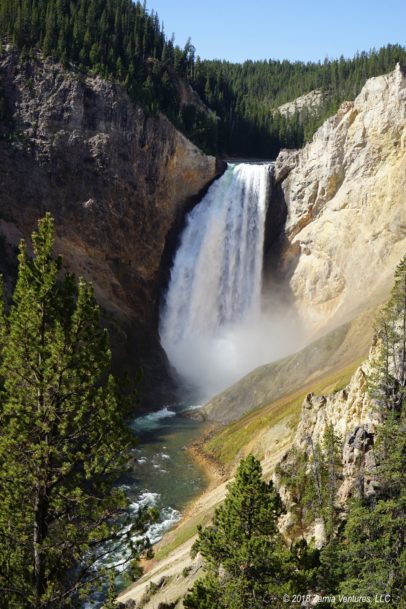 Zoom in to see people on the viewing platform to the right of the brink!

At the same time, it was interesting and gratifying to see the huge variety of visitors the park attracts. After spending so long in not-at-all-diverse Montana, coming into Yellowstone was like walking into the United Nations. Most notable were the many, many busloads of Chinese tourists, but there was also a very large contingent of Indian visitors. In this respect the visitor demographics were somewhat representative of the world as a whole. We heard countless different languages being spoken around us, and I made positive identifications of German, Spanish, Italian, French, and Hebrew.

Since we visited so many different areas of the park, we had the chance to check out multiple visitor centers, at Old Faithful, Mammoth, and Canyon. In addition to having more maps and brochures about the specific area they serve, the displays at the different locations focus on different aspects of the park’s geology, thermal features, history, and wildlife. The visitor centers we saw were all lovely buildings with well-done interpretive information. The park campgrounds were well-run, and whole park was surprisingly free of litter. It made me proud to see one of our country’s great treasures presented so well to the world. If only the entire world weren’t visiting at the same time as us…. 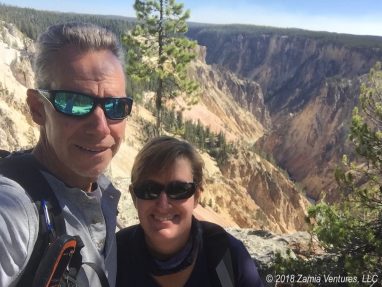 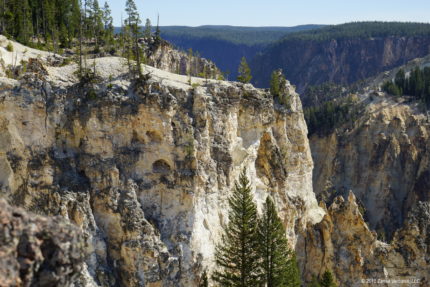 Next, we head south to the nearly-adjacent Grand Teton National Park for a serious hike-a-rama and plenty of gaping at mountains.