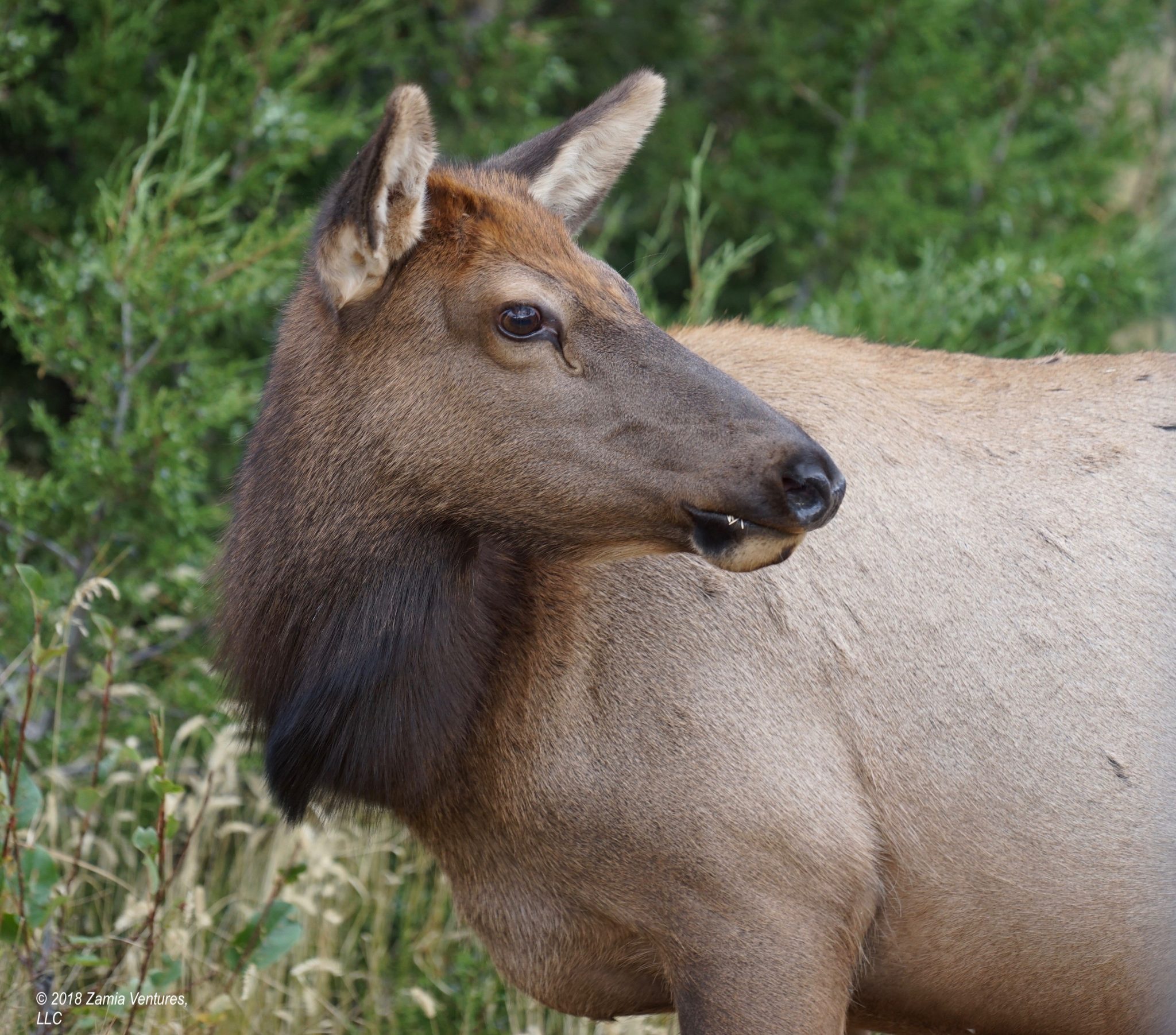 After nearly a week at Madison Campground, we relocated to the campground at Mammoth Hot Springs, close to the northern entrance to the park in Gardiner, Montana. Like many campgrounds in national parks, this one operates on a first-come, first-serve basis so we of course had no reservations. Considering how busy the park has been, and knowing that a trailer of our size won’t necessarily fit in all the spots in national park campgrounds, we knew we would need to arrive early to secure a spot that would work for us. This was confirmed when we checked the Yellowstone camping info on the NPS website in the days leading up to our relocation, which consistently showed daily fill times of between 11 a.m. and 1 p.m. for Mammoth. 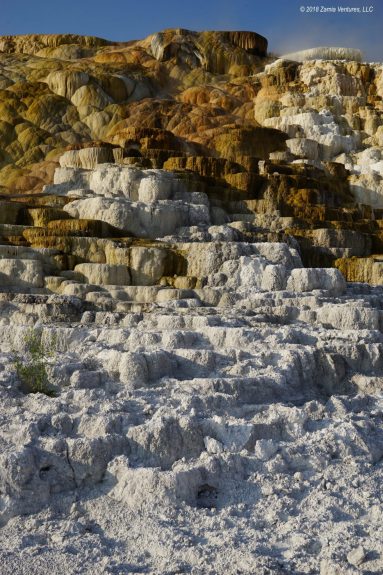 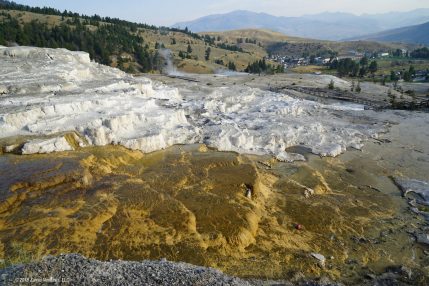 Town of Mammoth Springs in background of springs 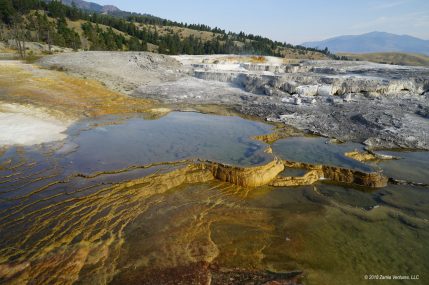 To ensure we arrived early, we hitched up the night before, and pulled out of our spot in Madison around 6:30 a.m. After visiting the dump station (in preparation for dry camping) and driving up to Mammoth, we arrived just before 8:00 a.m. and were pleased to learn we were fourth in line for a camp site, which assured we would be able to get a spot. The campground is situated along a hillside, and we ended up being placed on the higher side of the loop with a commanding view of the campground check-in area and the valley beyond.

You might guess from my rants about the terrible crowds in Yellowstone that we just hate people, but that’s not entirely the case. After all, our last permanent home was in downtown Miami and we loved being so close to so many events and activities. We just hate it when we have to fight crowds for parking spaces or wide open views. We really enjoyed camping within a short walk of the busy little town of Mammoth Hot Springs, home to park headquarters and a small collection of businesses and services. It was fun to walk over to town to take in the informative visitor center, see the historic structures built when the army patrolled the park (since the park was created 30 years before the park service was formed), appreciate the newly-renovated common areas of the historic hotel, and marvel at the people willing to stand in very long lines for ice cream and hot dogs at the stores. Admittedly, that ice cream line included us. Yum!

Perhaps the most entertaining aspect of our campsite was witnessing the daily dance of prospective campers seeking a spot to stay. The camp hosts did a great job of managing the incoming flow of traffic, placing new campers into appropriate spots as they became available. As people who tend to stay in one place for a minimum of 5-7 days, we were surprised by the high turnover we saw each day in the campground. After observing the proceedings for over a week, I have serious questions about the reasoning abilities of people who show up at 4 or 5 p.m. in one of the busiest parks in America, driving giant rigs, and are surprised not to find an open campsite that would work for them. Our campground was full by 1 p.m. every day, sometimes much earlier, and from our elevated perch we had the chance to witness and comment on all sorts of wailing and gnashing of teeth from people who encountered the “campground full” sign. OK, we may have some slight misanthropic tendencies after all.

An Excess of Elk

In the course of our travels this year, we have been fortunate enough to see many of the charismatic large animals that roam the continent. Our visits to the Badlands and the Black Hills brought us many, many opportunities to observe bison, pronghorns, and bighorn sheep. Our time in Glacier National Park provided numerous glimpses of mountain goats and grizzly bears, while moose practically lived in our campground. Strangely, we arrived in Yellowstone never having seen elk. Part of the reason is their fairly unusual schedule – they are practically dormant during the day, and most active at dusk and in the early morning, with nighttime activity during mating season. Our elk drought came to an abrupt and dramatic end during our stay at Mammoth.

There is a herd of elk that basically lives at Mammoth Hot Springs, nibbling and lounging on the manicured lawns throughout the town, and wandering up and down the hillside that leads from the hot springs down to the town, then to the campground, then to the river below. We encountered them everywhere, including large numbers of them moving through the campground, sitting on the hillside alongside the trail between the campground and the town, on the lawns in town, and on the trails around town. We literally did not have a day go by without elk sightings. 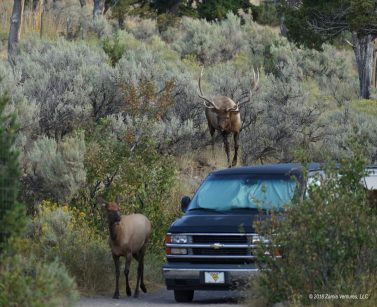 Bull following a cow into the campground

Lady elk in the campground 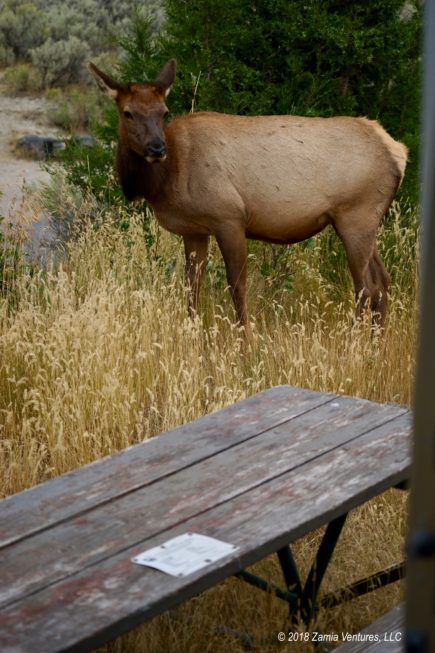 We heard stories from rangers that made us pretty cautious about getting close to these large and powerful animals. In the springtime, the moms are fiercely protective of their babies. They will viciously charge and trample anyone and anything they consider a threat to their young. By the fall, the calves are nearly grown and moms are much more mellow. Instead, the males start getting aggressive during breeding season as they jealously guard their herds from interference by other bulls. The males with big harems are so crazed during the fall breeding season that they aggressively attack all sorts of things. One ranger described witnessing a large bull ripping the bumper off a Honda Civic parked in front of the visitor center. 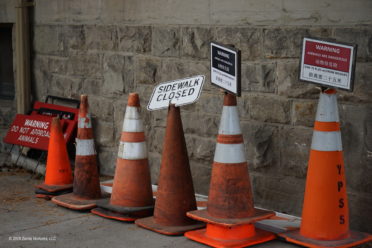 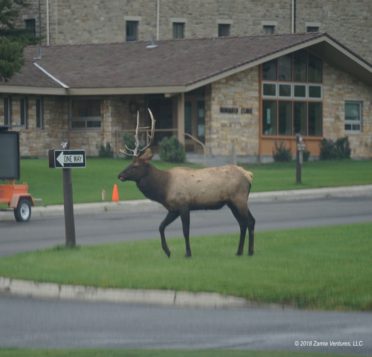 Bull in front of the clinic in town 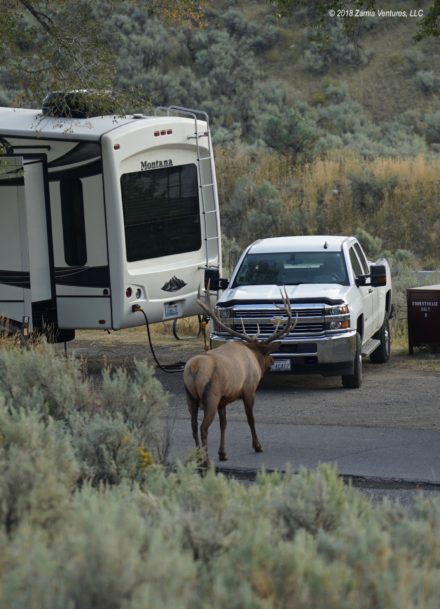 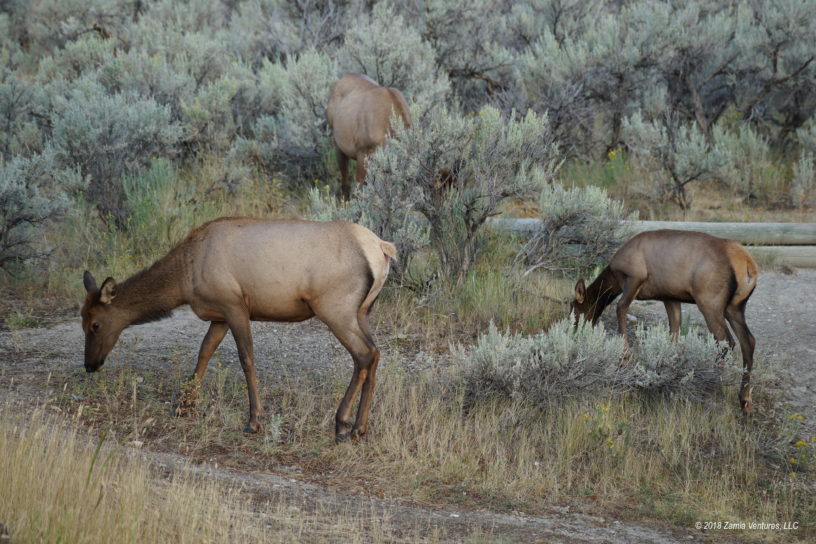 Nibbling in the campground

Our visit coincided with the height of breeding season, and the most distinctive aspect of breeding season is the bulls “bugling.” The name suggests that the sound is a magnificent and sonorous tone that carries for miles. Well, the sound does carry for miles, but it’s more like a very squeaky screen door or a stubborn nail being pried from a piece of wood. There are several examples on the NPS website. Since elk are most active at night, this persistent screeching sound became the soundtrack of our nights – specifically, the hours between 1 a.m. and 3 a.m. It’s good that we had all our windows closed at night to ward off the relatively cold temperatures, because without that small amount of muting I might have lost my mind. Needless to say, I will be perfectly satisfied if the next elk I see is on my plate in the form of a burger or sausage.

During our stay at Mammoth, we made sure to visit the massive thermal feature that gives the town its name. The huge terraces of travertine have been deposited from multiple active hot springs, and are constantly remaking themselves as flows of water change location or direction. Photos do not do justice to the immense scale of these formations, which tower over the town and can be seen from miles away. Not only are the terraces huge and full of steam, waterfalls, and alien formations, as a bonus they are also full of elk.

Some terraces are tiny 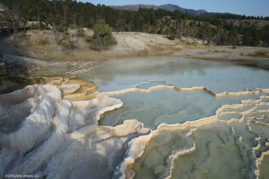 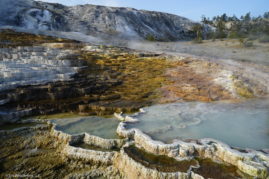 So many colors and textures 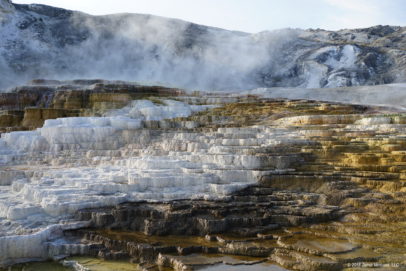 The steam confirms this is a hot spring

Some areas have smooth surfaces

In the course of our drives around the northeastern portion of the park, we also visited the thermal features located on the eastern portion of the main loop drive: the Mud Volcano and Sulfur Caldron areas. These features stink – literally. They are highly acidic, and filled with bacteria that not only thrive in the flesh-melting springs but convert some of the acid in the water to sulfur, resulting in strong and unpleasant odors. The smells are part of thermal features that belch mud and steam, rather than forming glassy springs that look like inviting pools. This area of the park definitely helped earned the nickname “Colter’s Hell” after John Colter, a mountain man who was a member of the Lewis & Clark Expedition and subsequently one of the first white Americans to explore Wyoming’s thermal features. 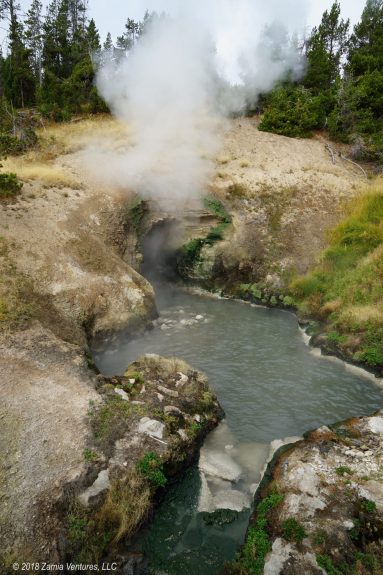 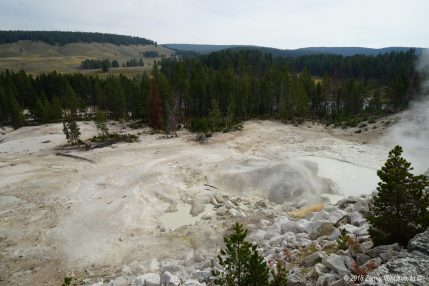 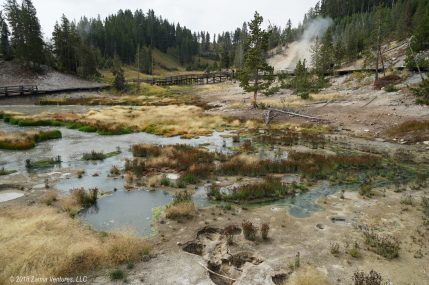 Life persists in this uninviting place

As usual, we spent plenty of time on the trails and were rewarded by having them virtually to ourselves (except for the elk, of course). The northern part of the park is relatively dry, and has a desert-like feel thanks to the predominance of sage bushes. The low-growing vegetation allows for long vistas, which we really enjoyed on the several hikes we took. A few images from our hikes on the Beaver Ponds Loop, Lava Creek, Bunsen Peak, and Osprey Falls trails: 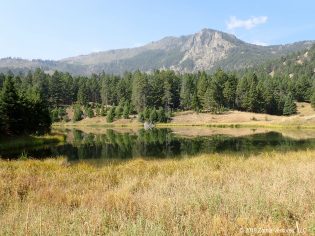 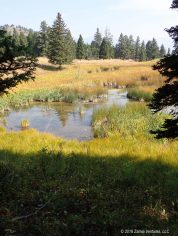 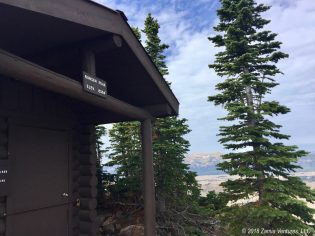 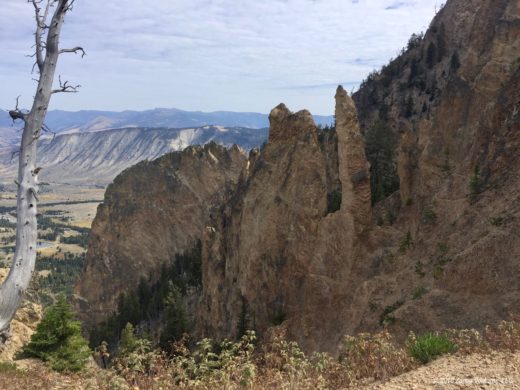 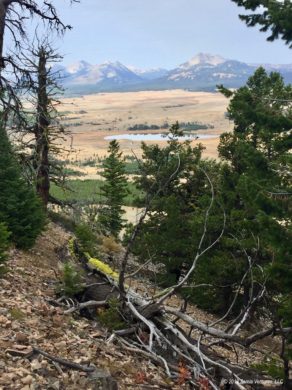 Swan Lake Flats in the distance 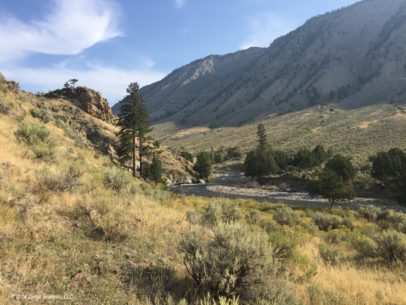 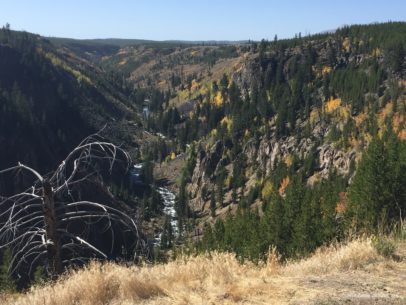 Wildlife Everywhere (And Not Just Elk)

During our stay at Mammoth, we also took several drives to the Lamar and Hayden Valleys, which are perfect havens for the large ungulates of the park (bison, pronghorns, elk, etc.) and their predators. The huge herds of animals spread out across the vast valleys were impressive, to say the least. While we had previously seen a lot of different animals in more intimate settings, our experiences here really brought home the immense size and grandeur of both the park and the wildlife populations. 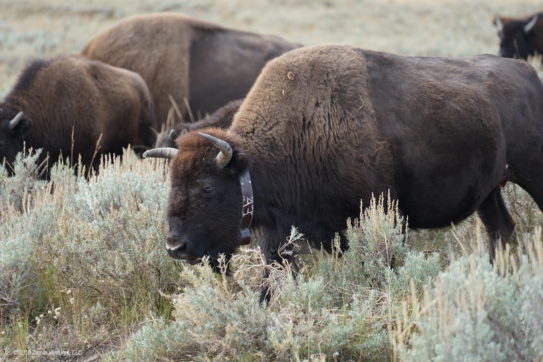 Someone has a spiffy collar! 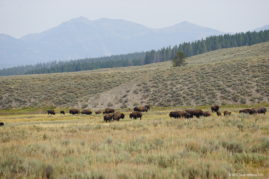 Bison in the Hayden Valley 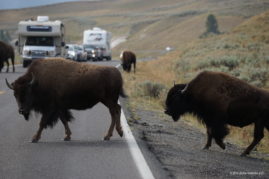 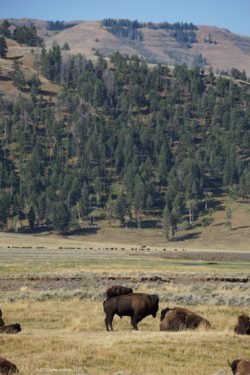 Lamar Valley – that line of black dots is yet more bison 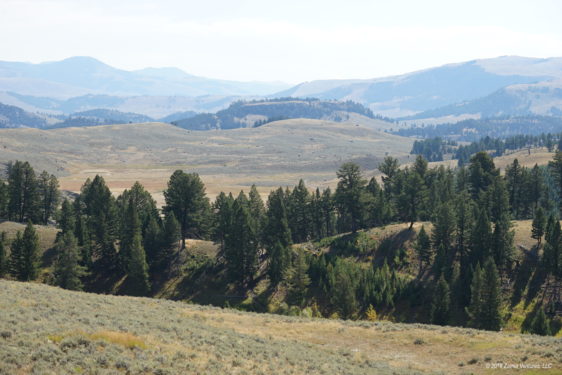 Vast expanses define the northeastern portion of the park

Also, our wildlife viewing is not all about big animals! I also enjoyed the chance to work on stalking some of the avian residents of the park in the hopes of getting good photos. Coming west has introduced us to entirely new birds, and we purchased a bird guide to the western U.S. in June to help us with the identifications. Since we hit the west, I’ve particularly enjoyed the large and charismatic magpies and ravens. They observe us with such boldness and apparent intelligence; I can easily understand why they have prominent roles in Native American stories. Ken’s favorite is the brilliant turquoise Mountain Bluebird, which we’ve been seeing since the Black Hills. Here in Yellowstone we also observed Clark’s Nutcracker, a member of the jay family first described by explorer William Clark. And it was cool to see Trumpeter Swans on the aptly-named Swan Lake! 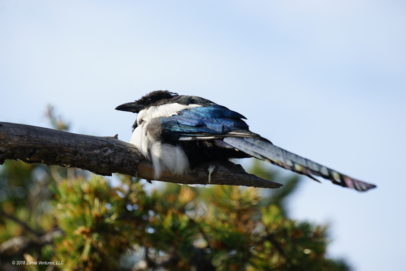 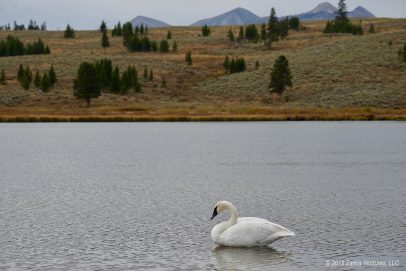 A swan in Swan Lake — truth in advertising!

Our final chapter in Yellowstone will feature the area around the Grand Canyon of the Yellowstone, where we will spend a few days before heading south to Grand Teton National Park. Waterfalls await us.