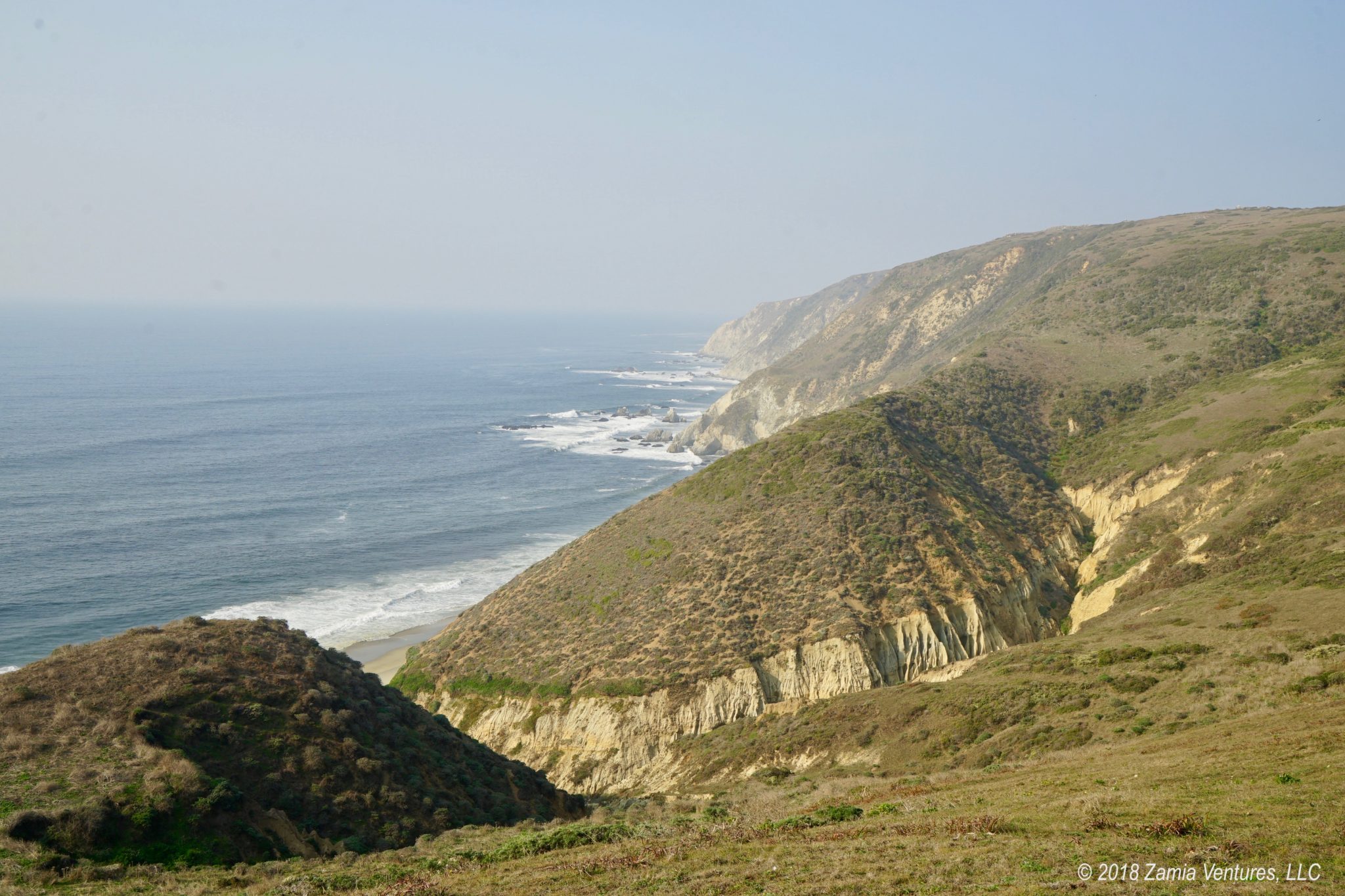 I realized during this stay that while we are usually awed by the sights we’ve seen on the road, we are seldom surprised. We were thrilled, but not particularly surprised, to see bison in the Black Hills and huge trees in the redwoods. Point Reyes National Seashore, on the other hand, really surprised us.

We selected Point Reyes National Seashore as a destination primarily because of its location just north of San Francisco, making it the perfect final stop before we head to the San Francisco Bay area to spend Thanksgiving week with family. I assumed that a national seashore would offer us some opportunities for beach walking, like the Canaveral National Seashore or the Cape Cod National Seashore, which would be enough to keep us entertained before a big week in an urban area. I suppose my lack of research is to blame, but coming in with modest expectations we were blown away by the diversity of environments within the national seashore, and by the immense amount of wildlife we saw. The only drawback to our visit was that the entire area was blanketed with relatively thick smoke from the horrifying Camp Fire north of Sacramento, so a lot of our ocean views were obscured and we were bombarded with daily news reports about unhealthy air quality.

In our explorations of the national seashore, we visited several different sections of the park. Our longest hike was the Tomales Point Trail, which runs right along the ridge of the northernmost peninsula of the park. Normally this hike would afford sweeping views of the Pacific as well as views across Tomales Bay, but because of the thick smoke we could barely make out the mainland across the narrow bay. We also hiked at Limantour Beach, and explored the Chimney Rock area. The park is quite large with very hilly terrain, and it takes time to just get to different areas of the park on the miserable, crumbling roads. But the craggy granite hills topped with Douglas firs, the peaceful estuaries, the open prairies, and the dramatic seascapes are all quite beautiful. Our overwhelming impression in each area of the park was that the wildlife was incredibly abundant. 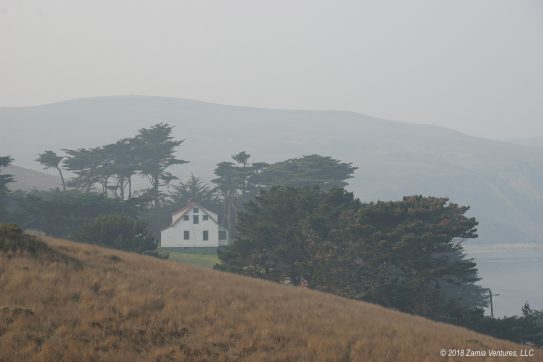 Smoke out on the point near coast guard station 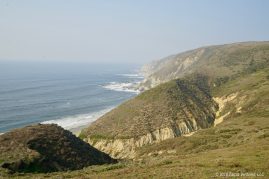 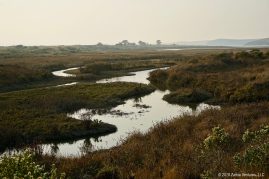 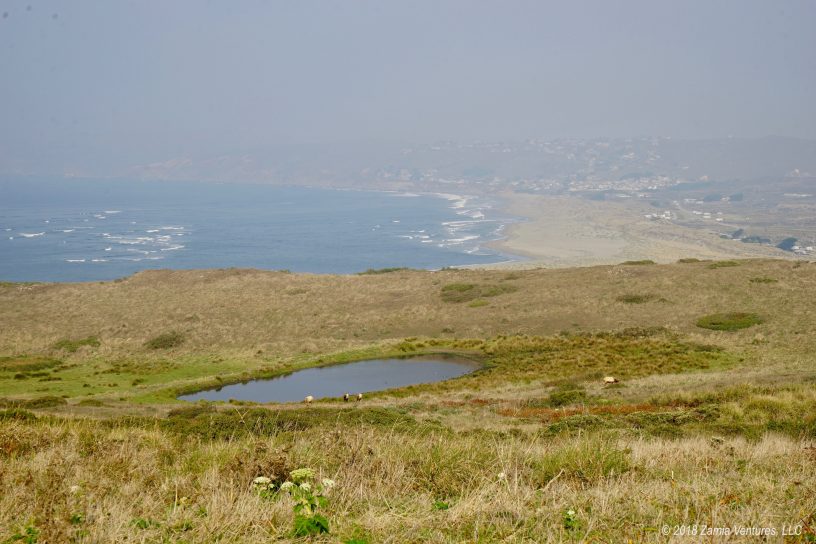 Four elk near the pond, plus view from Tomales Point to mainland

The Point Reyes peninsula meets the mainland in a deep valley that unites two very different types of ecosystems. On the mainland, the forests are full of coast redwoods and have the same dark, quiet interior as the forests in Redwood National and State Parks. The rocky granite terrain of Point Reyes supports an entirely different forest community dominated by Douglas fir trees, which can survive in the granite soils. The reason for the huge difference in such a short distance is that the valley itself is the San Andreas Fault, and Point Reyes sits on a different tectonic plate (the Pacific plate) from most of California. Camping directly on top of the infamous San Andreas Fault was just one of many surprises at Point Reyes.

The big animal success story at Point Reyes is the reintroduction of the Tule Elk. These large herbivores were once more numerous than deer in the area, but were nearly hunted to extinction in the middle of the 19th century to meet demand for meat prompted by the influx of gold miners and people involved in related businesses. A small herd survived in Bakersfield and was used as a foundation group to start a new herd in the elk reserve on Tomales Point, a peninsula at the northern end of Point Reyes. 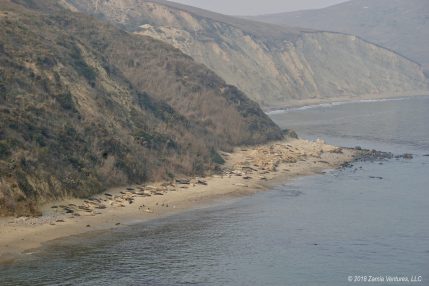 Many, many elephant seals 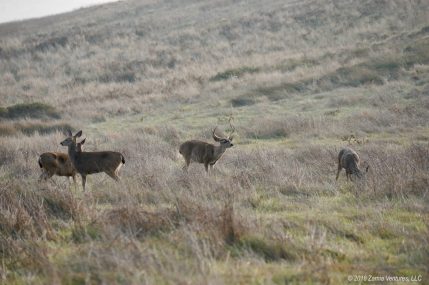 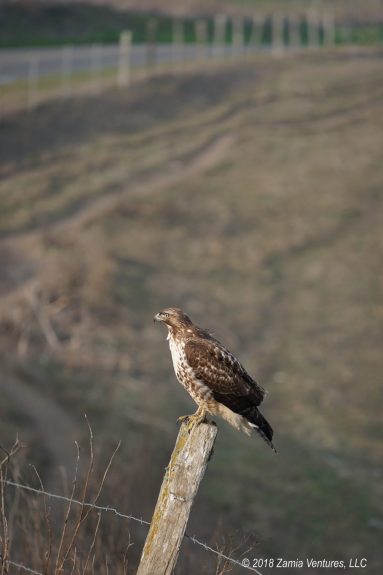 Birds of prey on many fenceposts

We began our hike in that area by seeing several large groups of elk grazing on the hillsides, and hoped to catch a glimpse of one or two while we hiked. We spotted a large bull on a distant ridgeline, and spent several minutes observing him through our binoculars, commenting on the size of his antlers and generally being excited about seeing an elk. When we turned around to pack our binoculars in our bag, we were startled to see another large male lounging on the ground about 30 feet behind us. The low shrubs that dominated the area had obscured our view of him from the angle we hiked in. The more we looked around, the more we realized that there were elk everywhere around the trail, but most of them were laying down so they were only noticeable when they lifted their heads.

Having experienced a heart-stopping moment of being charged by an elk in our campsite at Mammoth Springs, we wanted to give these large and dangerous animals a wide berth. So we gingerly made our way down the trail and hoped none of them stood up as we walked by. All went well until we encountered a group of four very large males grazing just off the trail near our anticipated turn-around point. We took that as a sign to head back and not push our luck. 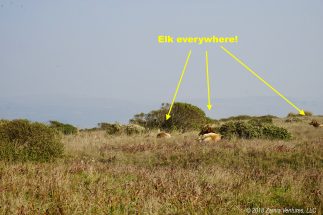 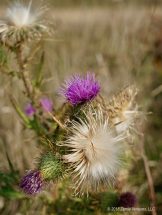 Elk were not the only large animals that we saw in abundance. There were deer everywhere we went, both on the trails and along the sides of the roads. The park is also full of dairy cows, thanks to the park service’s recognition of the ranching heritage of the area. Ranching began on Point Reyes in the early part of the 19th century, when California was still part of Mexico, and after formation of the national seashore the park service has allowed the original ranching families to continue to lease grazing lands. So Holsteins and other dairy cattle are a prominent part of the park’s landscape.

The park is also home to many marine mammals, particularly elephant seals and harbor seals. We enjoyed seeing the elephant seals relaxing on the small beaches in protected coves along the coast, flanked by protective steep cliffs. The cliffs of the park also offer excellent whale watching opportunities, although we were not visiting during a peak migration season and in any case the smoke probably would have diminished the views. 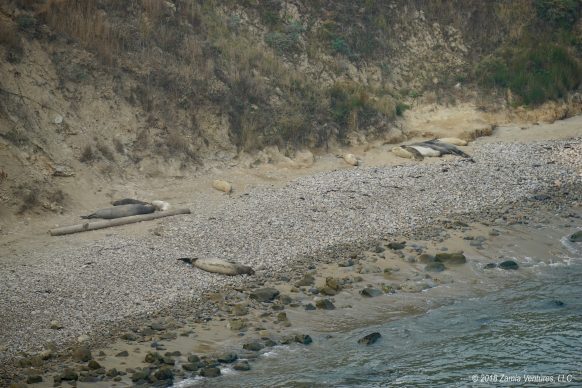 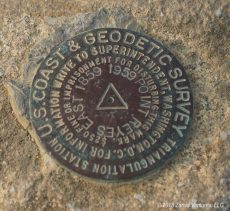 USCGS marker at the point 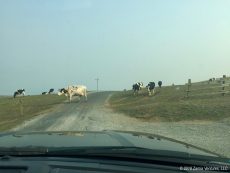 For us, the most surprising wildlife encounters were with the birds. Had I done more research in advance, I might have known that the park is one of the very best bird-watching destinations in the US. The diverse habitat of Point Reyes means that it has communities of shore birds, upland songbirds, prairie-dwellers like the funny-looking California quail, and an incredibly robust population of birds of prey. The park is also located along one of the major migratory flyways, so it receives seasonal visits from hundreds more species. The highlight for us was seeing so many birds of prey. Not only were they sitting on fence posts everywhere, they were also soaring on updrafts from the sea that frequently put them at eye level with us as we walked along the cliff-top trails. Despite spending a lot of time with our noses buried on our bird book, we were basically bewildered by the diversity of birds and failed to identify more than a handful of the species we saw. It was great. 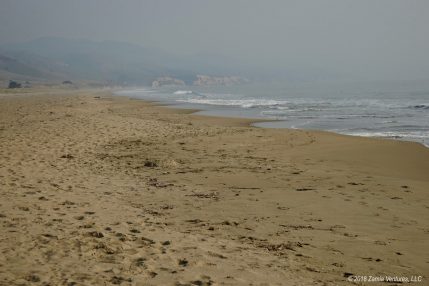 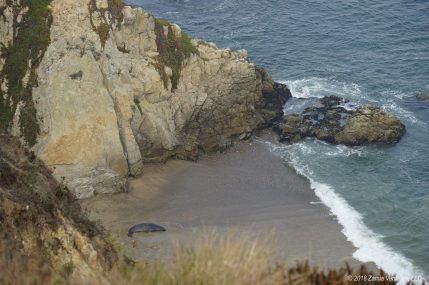 Lone elephant seal hanging out on the beach 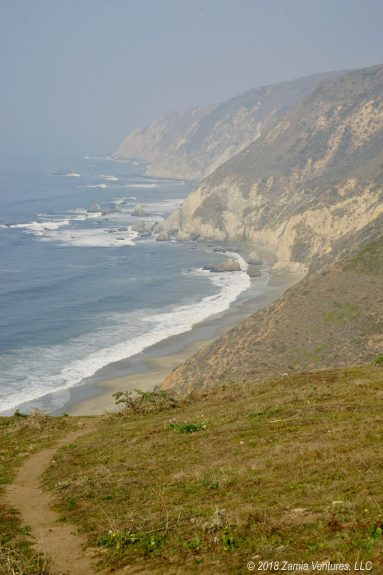 There are even some fascinating historical connections in the area. Drake’s Bay, the bay south of the point, is believed to be the spot where Sir Francis Drake hauled the Golden Hind out of the water for repair work before beginning his Pacific Ocean crossing in 1579 in the course of completing a circumnavigation of the globe. Drake named the area New Albion, reportedly because the white cliffs reminded him of the white cliffs of Dover.

Point Reyes National Seashore is definitely a hidden gem in our book. I can’t explain why we had relatively low expectations, but it was an area that could be explored for much longer than our 4-day stay. The big challenge is that camping options in the area are limited. The national seashore itself has no campgrounds that accommodate RVs, and the nearby state park is a typical California state park (high prices for no hookups). The state park is also heavily wooded, making it impossible to generate solar power, and when we made our reservations for the area we were concerned we might experience cold, rainy weather. As a result we ended up at a private park in the hamlet of Olema called the Olema Campground. The fact that we were here in off-season made it a pretty tolerable experience, since we had only a handful of neighbors to contend with.

Our campground was located just 2 miles from small town of Point Reyes Station, which proved to be a great destination as well. We stopped for lunch one day at Cafe Reyes in Point Reyes Station, where we indulged in delicious local oysters from Tomales Bay. They were so fresh they were in the water that morning, and had a unique vegetal taste. Instead of tasting fishy, they tasted more like crisp fresh seaweed  — it was delicious. Our meal at Cafe Reyes also featured one of our most outrageously wonderful pizzas in recent memory. The superb quality of the local, organic ingredients really shines through in all the food at this charming little restaurant. 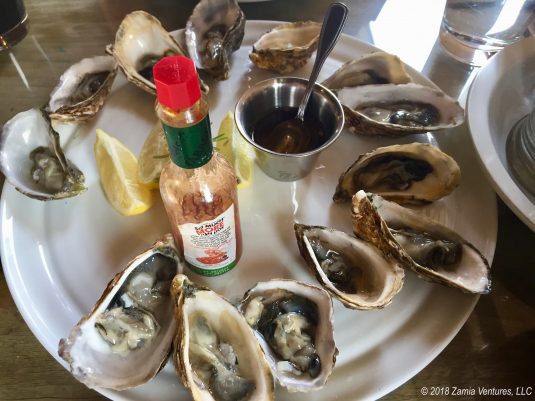 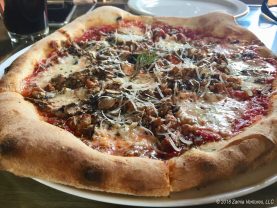 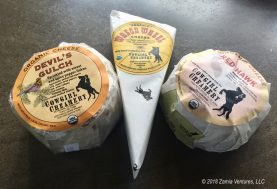 Could have purchased everything they make!

Another main destination for us in Point Reyes Station was Cowgirl Creamery. Since their products are sold nationally through Whole Foods, we’ve enjoyed their Mt. Tam triple cream several times. This place is a successful business, founded and led by women, which uses local organic milk to make rich, delicious artisanal cheeses, specializing in soft aged Brie-style cheeses. The only way that this business could possibly be more appealing to me would be if the workers rode unicorns to work. (They are paid a living wage, which is almost the same.) As soon as we decided to visit Point Reyes, I knew we had to visit Cowgirl Creamery in Point Reyes Station. Even better, we were able to get into one of their cheese classes. For just $5 per person (hear that, Napa??) we were treated to a really fascinating a one-hour seminar on cheesemaking that featured actually making cheese curd during the talk and tasting samples of virtually all the products the creamery makes. The seminar also covered the history of the business and its involvement in efforts to support and protect the local agricultural industry. The long history of dairy farming in northern Marin County and the efforts to preserve agricultural land, including through the Marin Agricultural Land Trust, were really interesting. Armed with all this knowledge about cheesemaking and its impact on the community, of course we ended up buying a bunch of delicious specialty cheese to take home with us. I make our bread from scratch, and love working with yeast, so it’s been marvelous to learn so much in the course of our travels about other foods made through the hard work of microorganisms: beer, wine, and cheese. Go microbes!

Our stay at Point Reyes also gave us our first taste of the family activities we would be enjoying during Thanksgiving week. We drove down one day to see a Peninsula Youth Theater production of the musical Willy Wonka, in which one of our nieces played several parts. The exuberance of the youth performers (maximum age 18) was charming and their talent level was pretty remarkable. It was an excellent way to get us in a family frame of mind just before spending Thanksgiving week in the San Francisco Bay Area with Ken’s brother and his family.

Buzzed by Condors at Pinnacles NP

Getting Introduced to National Park Camping

6 thoughts on “Surprised and Delighted by Point Reyes National Seashore”