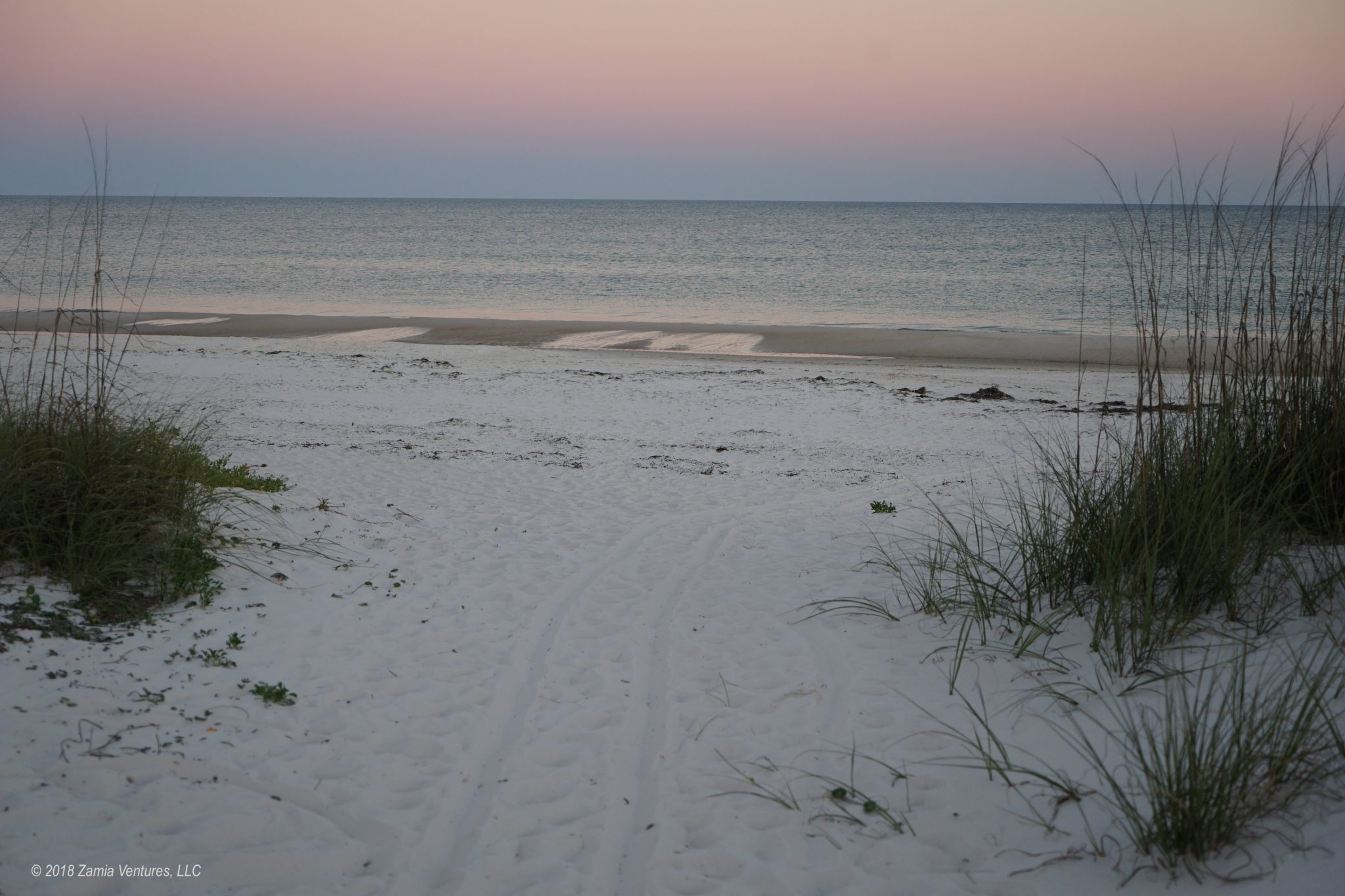 A beach is considered a balm for the soul, and we’ve definitely experienced that this week at St. George Island State Park, a park located on the tip of St. George Island, a barrier island in the Gulf of Mexico off Apalachicola. As part of Florida’s “Forgotten Coast,” this area is anything but crowded and hectic.

The beach consists of soft white sand that whistled beneath our feet as we shuffled along on our daily beach walks. There’s little to distract from the natural sounds of the beach, since the beach is breathtakingly lovely but nearly deserted, especially during the week. Instead of fighting crowds, we’ve enjoyed having our own private beach, complete with energetic seabirds, a small amount of shells, and mesmerizing patterns in the sugary sand. 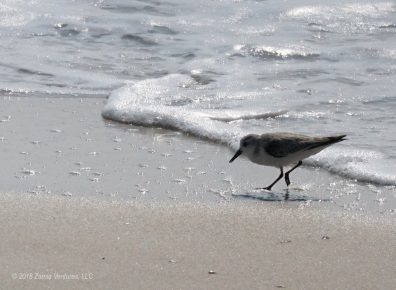 Some sort of sandpiper 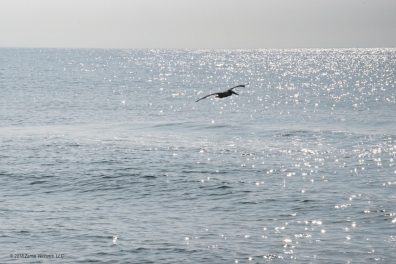 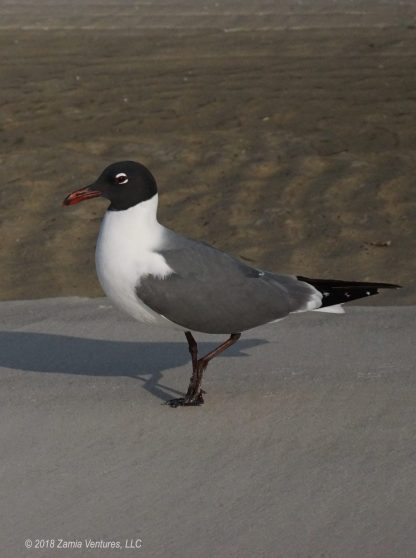 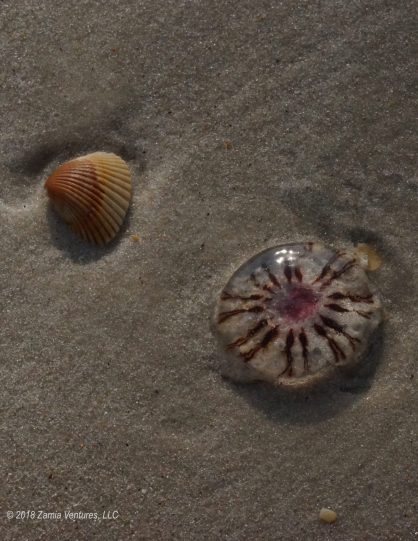 Cocky gull is not afraid of us 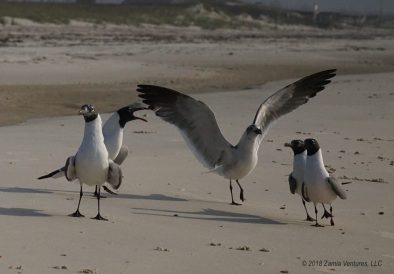 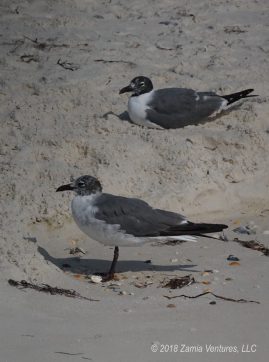 A pair of gulls relaxes 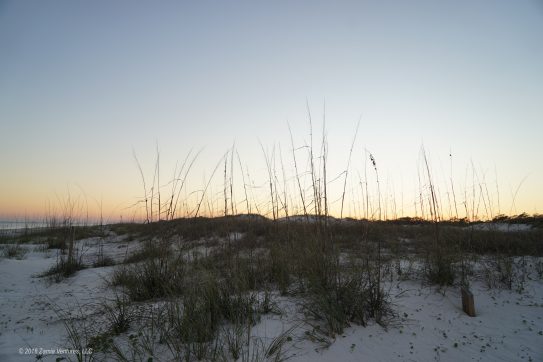 Sunset over the dunes 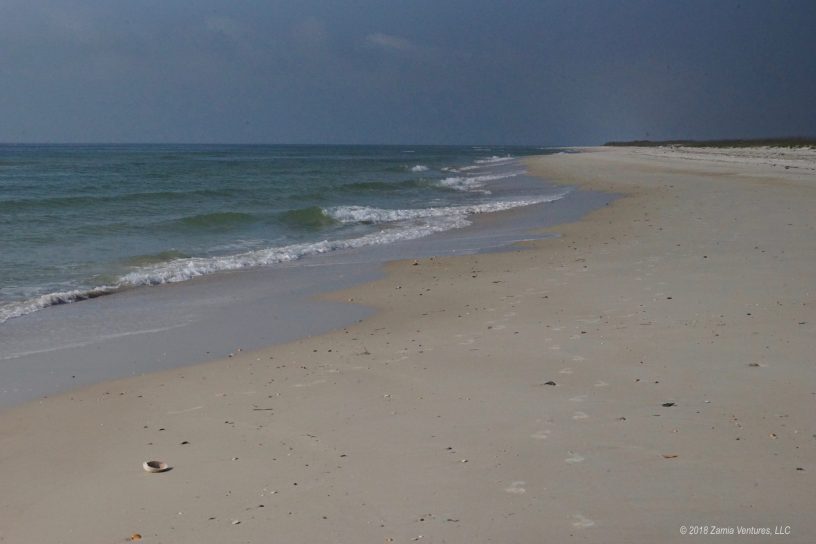 All this beach, all for us!

Between the birds on the shore and the extremely large populations of birds in the pine forested areas near the campground, the number of new-to-us bird species has us reaching for our bird book nearly every day. I think we’ve seen barn swallows flying along the beach, as weird as that seems. In other weirdness, every day we observed great blue herons on the beach — which was pretty unusual — but even stranger was the fact that they were quite obviously stalking the humans fishing from the beach and begging for handouts. It must work, otherwise they wouldn’t do it, but it’s a behavior I have never seen from these large and elegant waders.

Not pictured — because of course the camera is never at hand when you really need it — is the bald eagle we saw sitting in the pine trees just outside the campground. Also not pictured is the piping plover that was pointed out to us on the beach by a Fish and Wildlife Commission staff member, who apparently gets paid to follow endangered birds as they meander along Florida’s beaches and record their movements and activities. Not a bad gig! Also not pictured are the pods of dolphins we saw everyday, swimming just offshore.

The upland portions of the park feature pine forests and scrub, perfect habitat for all sorts of birds. A 5-mile trail (round trip) leads directly from the campground through interesting upland areas to a beach on the bay side of the island, and we hiked this trail to Gap Point several mornings during our visit. 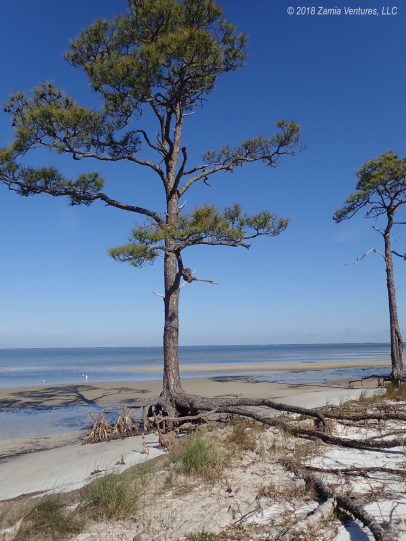 Dealing with erosion is tough when you can’t move 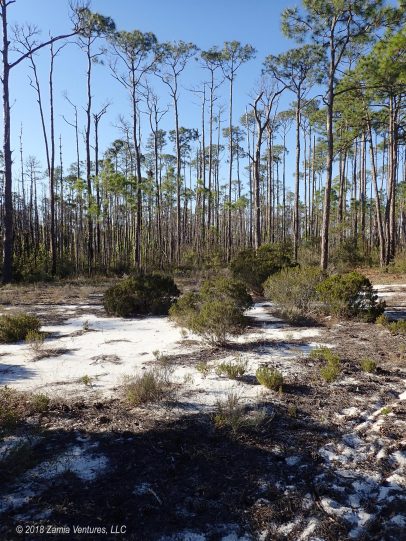 Upland forest on the island 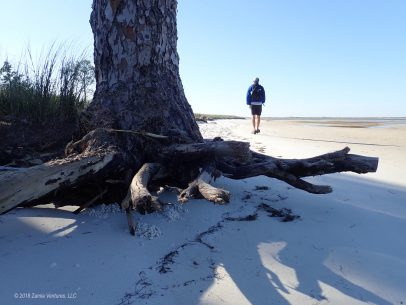 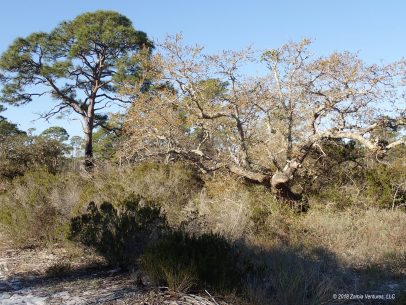 Thanks to the somewhat remote location with minimal urban glow, clear skies, and a new moon on March 17, we also had fantastic conditions for stargazing. Once again, we needed reference materials because this dark sky reveals so many additional magnitudes of stars. As the sun set each night we were easily able to locate some of the most recognizable constellations such as Orion, Ursa Major, Canis Major, and the Pleiades. But as time passed and the final wisps of twilight were absorbed into the total darkness of night, the sheer number of additional stars became almost overwhelming. We have much to learn to appreciate all these distant suns, but for now we just enjoy being awed by the scale of our universe.

The biggest surprise about being in the park is the noise level. Between the persistent rushing sound of waves from the shore, and the extremely large population of birds chattering amongst themselves, this place is anything but quiet! I am not complaining, however. The sound of competing birds beats the sound of jackhammers and car horns any day.

A Day in Apalachicola

We managed to tear ourselves away from the beauty of the beaches and forests a few times, mostly because we were enticed by the prospect of delicious seafood. We had our fill in the nearby town of Apalachicola.

Apalachicola is an interesting little time capsule of a town. Many of the downtown buildings date from the early and mid-19th century, when the booming metropolis of Apalachicola was the third busiest port along the Gulf Coast (after New Orleans and Mobile). Today, the population of Apalachicola is roughly similar to the size it achieved in 1860, so the historic two story brick buildings that line the streets of the small downtown area still comfortably accommodate the current residents and tourists.

The history of the region is preserved and interpreted at two small state historic parks, and since I am a history nerd we of course visited them both. The larger and more detailed park is the Orman House Historic State Park. The story of this park is similar to The Barnacle Historic State Park in Miami — it was a home constructed by an early resident of the area, and stayed in the family for over 100 years until it was acquired by the state for park purposes. Unlike The Barnacle, it appears there was never much pressure to tear down the historic house to make way for new development, and the main threat to its preservation was lack of resources for upkeep by the family. The final family resident apparently used the dining room to stable her horse — though that may have been more an issue of mental health than an issue of poverty.

The home has been nicely restored and filled with artifacts donated by descendants of the Orman family, giving a unique perspective on the daily lives of the people who lived in the home. This stately home is very Southern — the broad porch makes me wants to use the term “verandah” very much. We enjoyed the glimpse into Apalachicola’s history afforded by the home and its contents, though once again I was startled by the reliance on lifesize cutouts, this time displaying clothing worn by the former occupants. I just don’t get how creepy figures lurking in corners is a good interpretive choice.

The interpretation at the site also breezed right past the fact that the entire early economy of Apalachicola was built on slavery. The city’s status as a port city arose exclusively from shipping cotton grown on inland plantations, and the Orman family itself owned a large plantation in addition to their main business as cotton brokers. I would have liked more of an acknowledgement of the history — don’t quote me figures for the “white population” without telling me about the non-white people who lived here.

Our second historic site was a museum dedicated to Dr. John Gorrie, who invented mechanical refrigeration here in Apalachicola and therefore brought air conditioning to Florida. Though the museum was tiny, we were quick to agree that Dr. Gorrie deserves literally every available form of accolades and remembrance.

Finally, we sustained ourselves during this not-too-taxing outing by sampling the wares at the downtown brewery location of the Oyster City Brewing Company and also hitting a local clam shack for fresh oysters and clams.

Our week at the shore was intended to give beach-loving Ken his fill of ocean time before our very long journey through the center of the country, but we both would be happy to return here at any time. Please don’t tell anyone about this amazing place; if it stays “forgotten” we can come back to our private beach again! 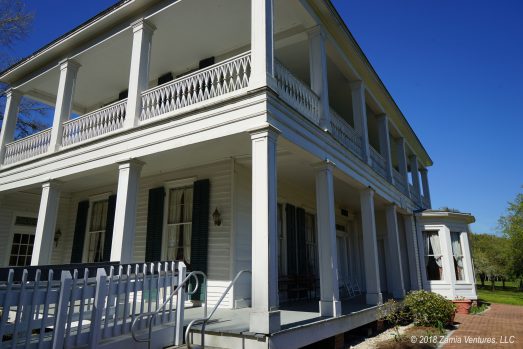 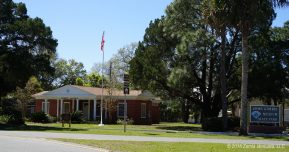 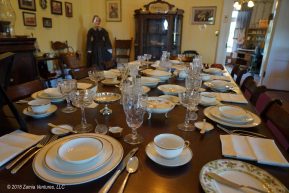 What is with the cutouts?? 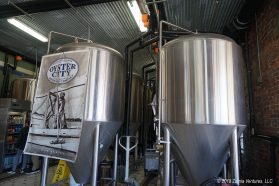 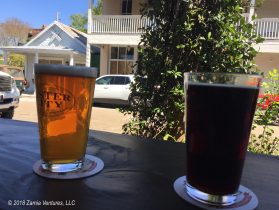 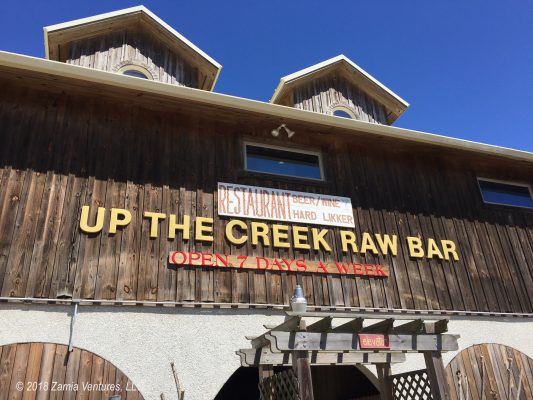 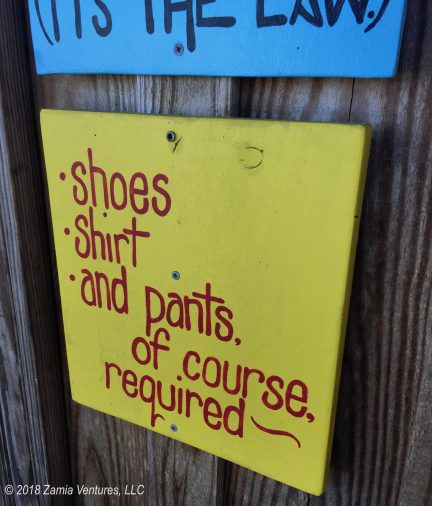 A small problem for Ken 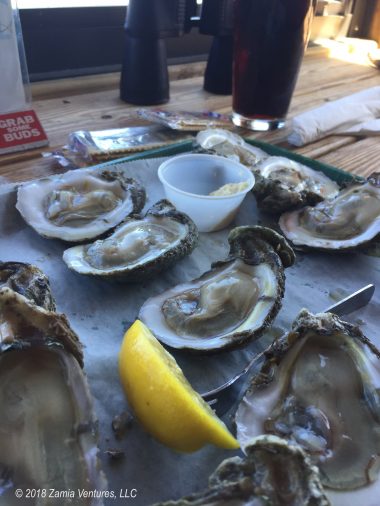 11 thoughts on “Kicking Back at the Beach”