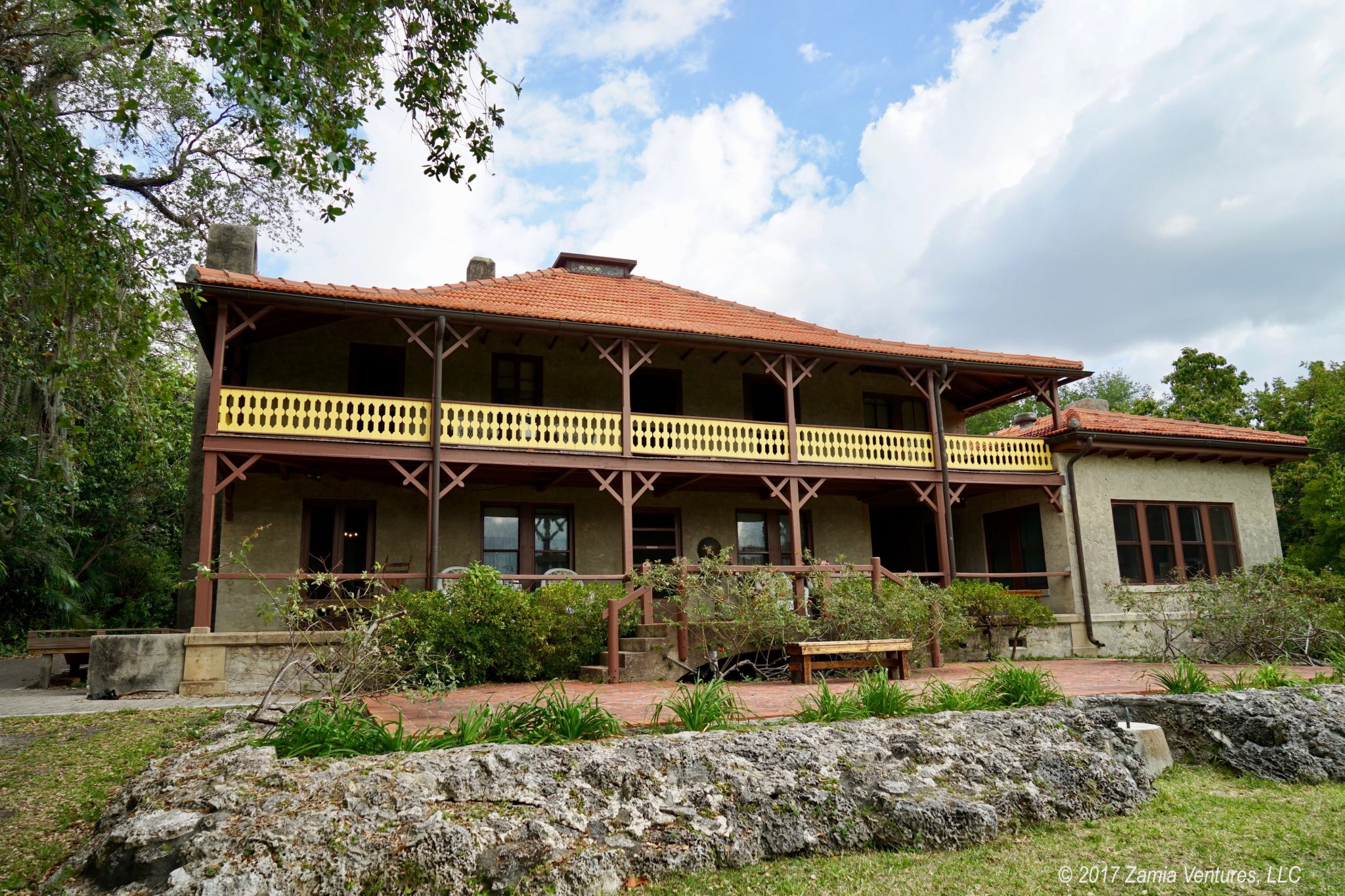 The weekend’s nice weather inspired us to visit one of the smallest destinations in the Florida State Park system, The Barnacle Historic State Park. The Coconut Grove property was the home of Ralph Munroe, one of the earliest pioneers in the Miami area.

Like many of today’s visitors, he came to the area in search of great weather. In Munroe’s case, relocation to Miami in 1881 was spurred by his first wife’s tuberculosis, with the hope that warmer weather would extend her life. She passed away during the couple’s first winter in the area, but Munroe ultimately decided to make the tiny Coconut Grove community his permanent home. 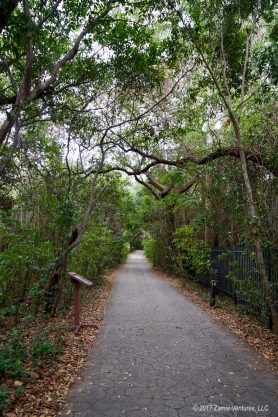 Path back in time through tropical hardwood hammock 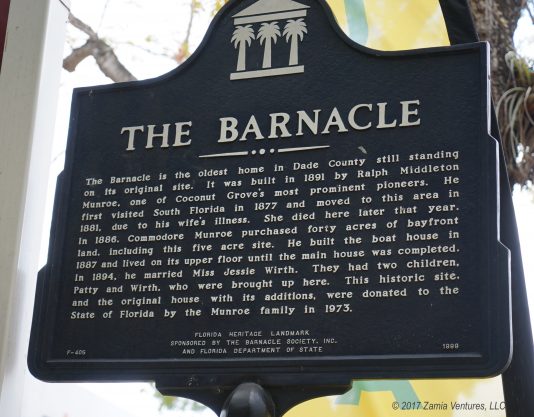 The “Era of the Bay” describes the period of Miami history stretching from the middle to the last years of the nineteenth century, before the arrival of the railroad or the construction of any meaningful roadways. As a result, nearly all travel was by water and homes were oriented toward waterways, primarily Biscayne Bay and the Miami River.

The Barnacle has a large cleared area facing the bay, but the inland portion of the property contains the original hardwood hammock that used to cover all of the upland areas now inhabited by millions of people. The few acres at The Barnacle and the area preserved at Simpson Park are all that remain of the original environment that greeted Miami’s early pioneers.

After a peaceful walk through the forest, the main attraction of the park is the collection of well-preserved buildings constructed by Ralph Munroe.

His first project was a boathouse. Munroe was ideally suited for the Era of the Bay because his greatest passion in life was designing and building sailboats. 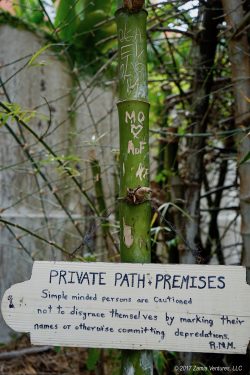 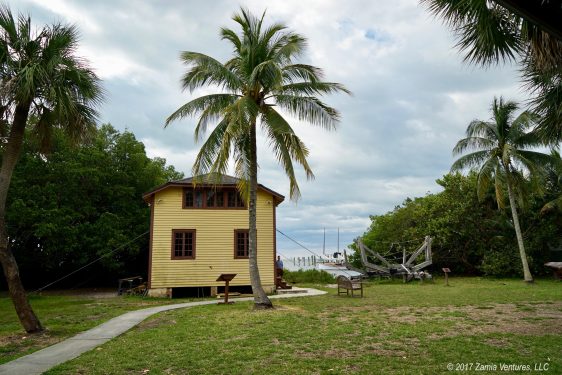 Current boathouse, with a recreation of Munroe’s sailboat Egret anchored behind it.

His waterfront boathouse served as temporary housing (before the main home was constructed) as well as a workshop for boat construction and a meeting place for all sorts of gatherings. “Commodore” Munroe was the founder and leader of the Biscayne Bay yacht club for decades, and his boathouse was the organization’s clubhouse. The original boathouse was severely damaged in the catastrophic 1926 hurricane, but Munroe repaired it with the version that sits on the property today. He improved the structure with guy wires for added support, and in its updated form the boathouse did indeed withstand Hurricane Andrew with minimal damage.

Signage around the property gives good insight into life during the Era of the Bay. One of the most charming items is a sign marking the pre-road, pre-railroad path used by the residents to traverse the properties that fronted Biscayne Bay. The few dozen residents of Coconut Grove originally traveled across town using a simple footpath that crossed over multiple private properties, wandering through the “yards” of the different bayfront homes. The worn path can still be seen as a narrow groove in the grass / sand.

Apparently the growth of the town led to the abandonment of the path, as property owners became annoyed with unwanted visitors peeking through windows and committing petty crimes. Ralph Munroe was particularly incensed about the rampant vandalism of his prized bamboo plants, and shared this view with the world via a sign notifying “simple-minded persons” of his desire that they not mark their names or commit other “depredations.”

Without a doubt, the main attraction of the park is Munroe’s home, The Barnacle — named after the sea crustacean it resembles. Munroe designed the home himself and built it using mostly salvaged lumber from ships that ran aground on the treacherous reefs of Biscayne Bay. His background in boat design certainly influenced the style and function of the home. 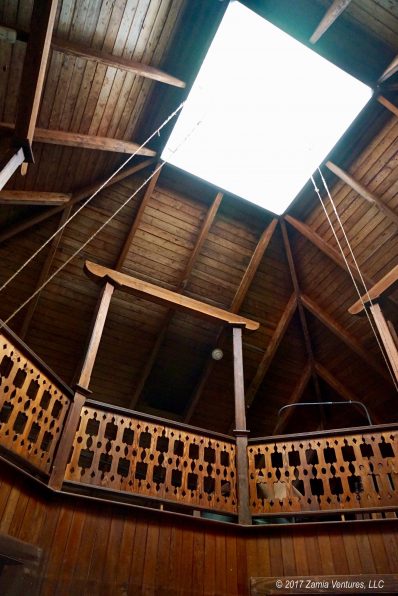 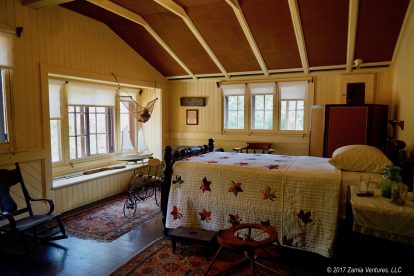 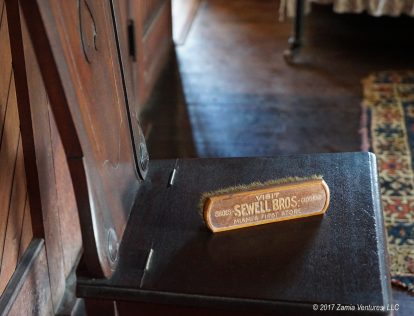 The unusual roof shape was designed to create an internal chimney-like structure to lift heat from the house. The central skylight is surrounded by windows which can be opened using a clever pulley system to encourage ventilation. The home is also full of built-in storage cabinets and custom millwork which echo the style and design of wooden boats. The side facing the bay is filled with large windows to capture the prevailing breezes.

The current version of the house is a bit of an engineering marvel. Barnacle 1.0 was a one-story home, generously proportioned for a single resident or a couple. As the Munroe family grew (more on that later) the house needed to be expanded. Munroe’s interesting solution, driven by the detailed work that had gone into the unique roof and attic structure, was to jack the entire existing house, other than the kitchen, up using railroad jacks — the railroad had arrived by this time — and build a new first floor underneath. The project worked surprisingly well. Other than a hallway to the kitchen that ended up being a hallway to nowhere, the new second floor of the home easily transformed into a generous group of bedrooms. The new first floor features plenty of storage and public rooms like the dining room and living room.

The most interesting aspect of the home is that it preserves an original Florida homestead. Ralph Munroe remarried later in life and had two children with his second wife Jessie. Following Munroe’s death in 1933 and Jessie’s death in 1940, their son Wirth and his family lived at The Barnacle, keeping in much the same condition as the original homestead. Munroe’s daughter-in-law moved out of the property and into a retirement home following Wirth’s death in 1968 and at that point the family sold the property to the state for preservation as a park. The home was still in a condition very close the original pioneer homestead. Ralph Munroe’s descendants never installed central air conditioning, and as a park the home has been restored to a condition that existed in pioneer days (though with electricity).

The home today is furnished with lots of period furniture, artifacts from the Munroe family, and other items that recall early Miami history. My personal favorite was a shoe shine brush that doubled as an advertisement for “Miami’s First Store.” I am very tickled by the idea that Miami, despite being a major international city, is so new that people still have random items laying around from the “first” anything in town. I am entertained thinking about what sort of weird items might have been distributed in the distant past advertising “First Cheesemonger in Paris” or “Beijing’s Original Roast Chicken Place.”

Ralph Munroe was also a early adopter of photographic technology, and his surviving photographs are an important resource for understanding how Miami’s first pioneers lived. The Barnacle has his actual photographic equipment on display along with reproductions of many of his photos. Let me just say that I am incredibly impressed with the images Munroe captured using, essentially, a cardboard box with a lens on one side. The photos of Seminole families that traded with the American pioneers, Bahamian immigrants who moved to Miami to help build the burgeoning city, and early American immigrants and tourists illustrate the immense diversity of  Miami’s first days.

What really stood out to us at The Barnacle is how unusual it is to visit anything in Miami with a clear connection to the city’s beginnings — and as history nerds, we are on the lookout for these sorts of things! Seemingly all of Miami’s early buildings have been torn down and replaced by condominiums. That’s demonstrated very well by the Munroe photo to the left showing the north bank of the Miami River — exactly where we live today, in a high rise condo complex. Unlike Boston, where historic structures sit adjacent to gleaming new skyscrapers, Miami has not managed to preserve much of its architectural heritage. The Barnacle is a welcome exception to this rule, and spending part of a day wandering around this historic park gave us a small glimpse of the wild yet beautiful place Miami’s pioneers experienced.

The interior of The Barnacle is only open to visitors who take the guided tour, which is generally given 4 times per day and costs an additional $3 per person (park entry is $2 per person). Be sure to time your visit to coincide with the house tour. The park also hosts many regular events ranging from concerts to yoga-by-the-sea, so check out the event calendar when planning a visit.