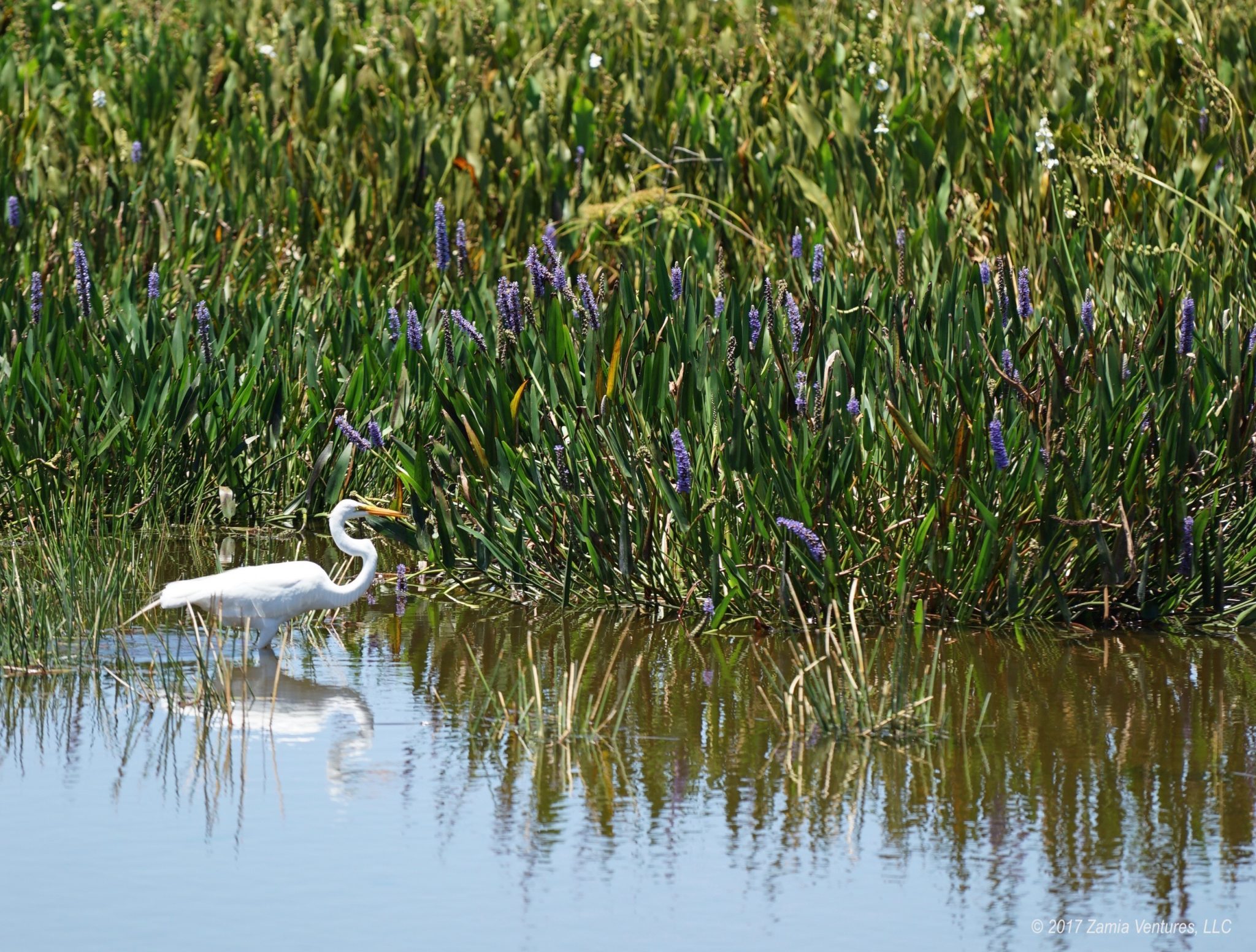 The Palm Beach County Water Utilities Department deserves mad props for creating not one, but two, different and equally interesting locations that serve a dual purpose: water reclamation / filtration, and public access to wildlife viewing. After our successful visit to Wakodahatchee Wetlands in January, we decided to take advantage of the last nice weather of spring to visit the nearby Green Cay Nature Center.

Like Wakodahatchee, Green Cay features extensive boardwalks through a wetland area that originally was used exclusively by the water utility for water treatment purposes. The main difference between the two locations is the configuration of the boardwalks. Wakodahatchee is a more compact property, the boardwalks are looped fairly tightly, and the boardwalks also pass fairly close to the tree islands so visitors are extremely close to the birds. Green Cay is a much larger property, and the boardwalk is essentially a 1-mile circular loop around the perimeter. That means visitors enjoy much larger, wide open vistas, and a slightly different mix of residents, but relatively fewer up-close interactions. Both sites are outstanding places to enjoy South Florida’s diverse population of wetland residents, and both are 100% free to visit — bonus! 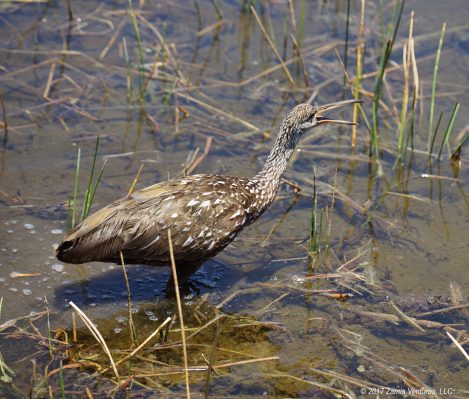 Limpkins have a very piercing call — which is downright terrifying when you don’t realize the bird is located just underneath the boardwalk you are standing on. 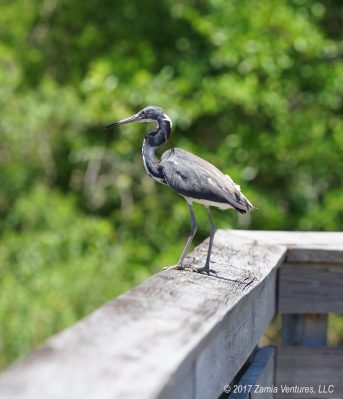 While the main focus of our stroll around the boardwalk was the birds, we were happy to see several large alligators and many, many turtles. My favorite turtles were a cluster that had cleverly devised a way to hang out in the water with the absolute minimum effort. They crawled atop buoyant mats of algae that served as rafts and allowed then to float suspended just below the surface of the water, with snouts in the air to breathe. The level of sloth (or is it efficiency?) was truly remarkable. I am in awe. 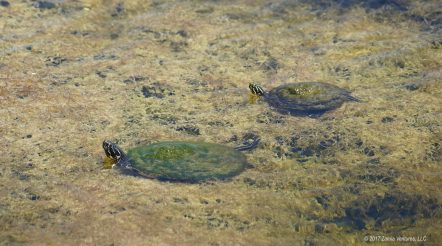 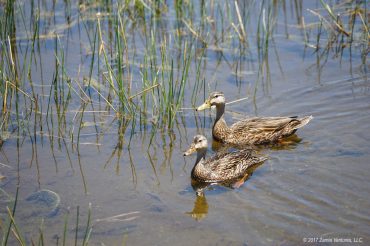 In addition to observing wildlife, we also enjoyed watching the other people watching the wildlife. It was great to see lots of children enjoying the outdoors and pointing gleefully at different animals they spotted. It was also relatively easy to find the wildlife, since any creatures located close to the boardwalk were generally attended by a gaggle of eager observers, many toting fancy cameras with super-zoom lenses. My favorite was a roseate spoonbill calmly perched on a snag (dead tree). The bird basically taunted observers by constantly making movements suggesting it might be taking flight — and showing off its distinctive pink plumage — but instead doing nothing more than grooming. The bird’s feather-smoothing activities showcased an impressive array of yoga-like poses, several of which provided fleeting glimpses of the body areas with the most colorful plumage.  Each pose came with auditory accompaniment — the clicking of hundreds of high-speed camera shutters, following by murmurs of disappointment when the bird resumed a bland stance. 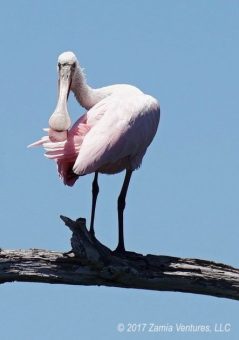 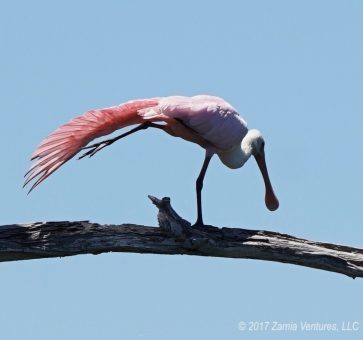 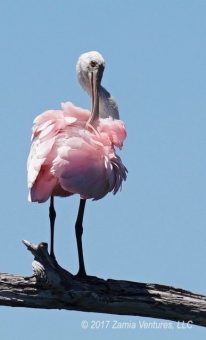 And grooming some more

The spoonbill was only able to hold our attention with its movements for about 15 minutes. Several of the hard core photographers refused to capitulate, remaining in place for more than half an hour eagerly anticipating a shot of the bird in full flight. I don’t know if they ever achieved their goal, and we were happy to move on and spend several minutes discussing whether the birds that reside at Green Cay are actively taunting photographers or just ignoring them. Or maybe the birds have become conditioned to think that the sound of camera shutters is the sound that normally accompanies outstretched wings.

Regardless of what’s going on in the animals’ brains, it is definitely remarkable how calmly the birds and other animals react to hundreds of humans thundering along a wooden boardwalk. Perhaps it’s our local version of the Galapagos, where animals are notably unafraid of humans and essentially ignore the tourists. In any case, soon the animals of Florida’s wild places will enjoy more peace and quiet. Summer is here, with Florida’s well-known humidity driving the “feels like” temperatures above 100 degrees. Oh, and summer is the high season for mosquitoes.

We (and most other sane people) will be hiding out for the season in our air conditioned homes and offices. Our adventures in South Florida this summer will be focused on museums and other indoor activities. The outdoors will only beckon if there’s water involved.

Helping Save Critters at SFWC

1 thought on “Another Great (and Free) Birdwatching Location”