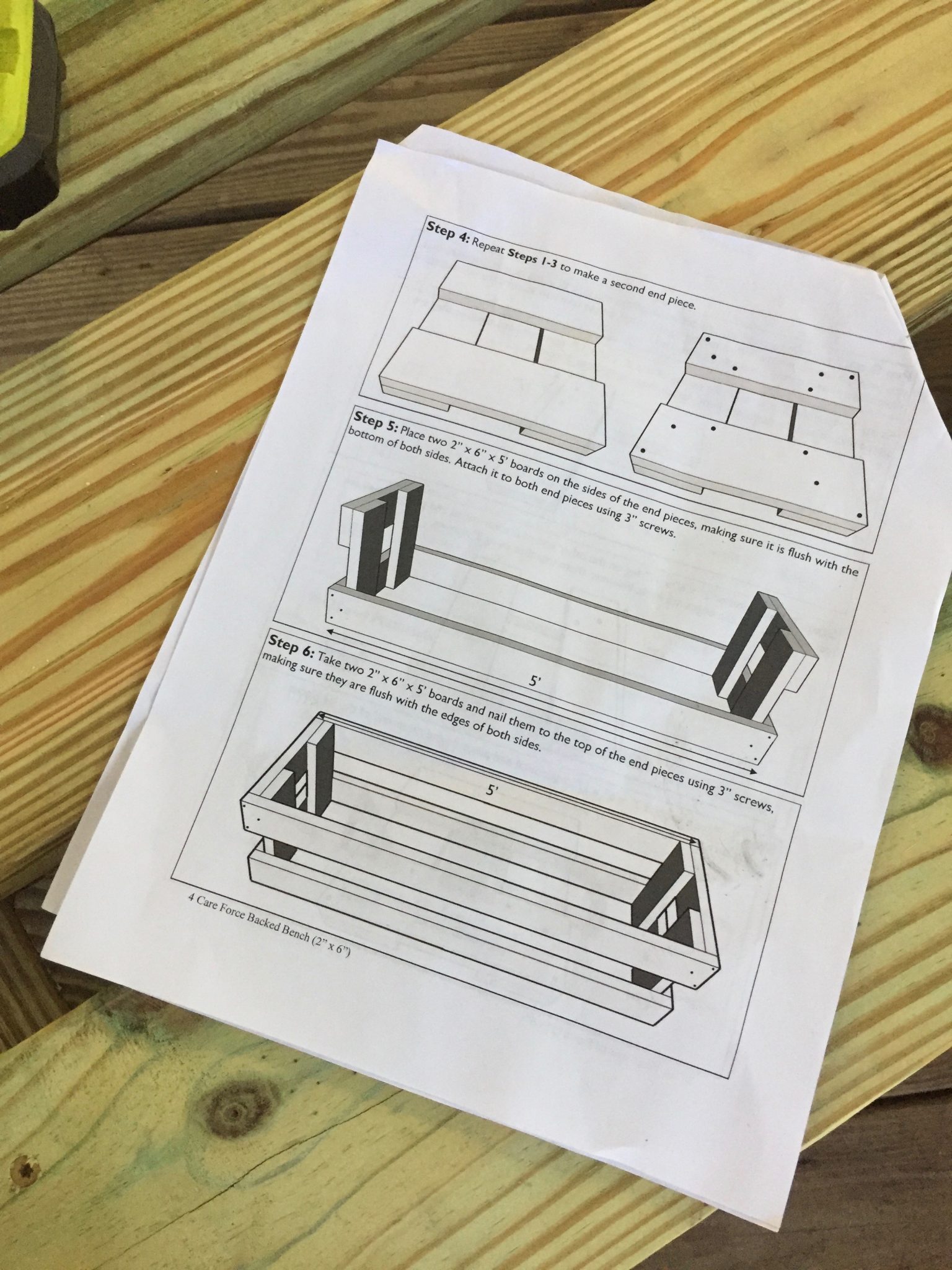 It’s spring — or at least it is here in Miami, where winter is generally somewhere between fleeting and nonexistent. That means it’s time for my firm’s annual collection of service projects, which I am always excited to join. Unlike last year, when I traveled all the way to Ft. Lauderdale to build habitats for wildlife rehabilitation, this year I participated in a project that was so close to home I was able to get there via the downtown Metromover.

The project location was Simpson Park, a downtown park that was completely new to me despite being one of the oldest parks in Miami (map). Our team of about a dozen colleagues joined volunteers from City Year to build benches for use by park visitors. Incredibly, given that we are rank amateurs — and lawyers to boot — we were able to transform piles of lumber into very serviceable seating areas.

Our job was made easier by the fact that the boards were already cut to size, and we received step-by-step illustrated instructions. Thanks to my IKEA addiction, I am a master at following assembly instructions. Instructions involving words and not just diagrams are child’s play! My team assembled the sturdy, solid wood bench with the help of my new favorite toy: an impact driver. I thought I loved my cordless drill but my affections may have been alienated by this incredible tool. 😉

We then sanded all the surfaces including rounding off all the corners of the boards to make the bench human-friendly. It was extremely disappointing that no power tools were involved that step. Finally, after lugging the massive thing to its final resting place, we stained it a rich mahogany color. The six construction teams produced six mostly identical, mostly accurate benches for public enjoyment scattered throughout the lovely park. Success!

Other than a new power tool infatuation, there were two great outcomes from the project. One is that I learned about an interesting park with a significant connection to Miami history. Established in 1913, Simpson Park preserves about 8 acres of the tropical hardwood hammock that originally covered the entire area between the Miami River and Coconut Grove. The 1913 date is so early in the history of Miami that establishing the park involved acquiring the parcel from Mary Brickell herself, one of Miami’s founding mothers. Thanks to the age of the forest, the park is home to a national champion tree (largest/oldest): a Willow Bustic (Sideroxylon salicifolium). The tropical hardwood hammock is a densely shaded area, with immense trees clinging with powerful roots to the visible limestone substrate, just like in several parks we visited last year in the Keys. It’s an interesting juxtaposition to have a park that preserves the original, pre-pioneer Florida environment just steps away from the high rises and concrete jungle of downtown Miami.

Even better was the opportunity to learn about the City Year program in Miami. An affiliate of the AmeriCorps program, City Year brings recent college graduates to cities to volunteer in schools during a 10-month commitment. I was interested to learn, though not too surprised, that Miami-Dade County has the 4th largest school district in the nation (enrollment 350,000+) and is the second largest minority-majority school district. We have many high-poverty schools and also many students who don’t speak English at home, which creates significant challenges for the school district.

City Year participants are assigned to schools around the county, typically around a dozen per school, to assist specific teachers in either the math or English department. In addition to providing supplemental instruction for the students who struggle most with these core skills, City Year volunteers mentor students in behavioral matters (AKA soft skills) and manage enrichment programs that take place before and after school.

Separately, the City Year volunteers work with community members (that would be me) on community enhancement projects. I was thrilled to see that all the City Year volunteers working on our park project were women of color. The team leader on my bench, Emily, is an impressive Dominican woman from southern New Jersey who plans to pursue a PhD in Latin Studies but is assisting with 7th grade math this year. City Year loved that she is bilingual, but I loved that she has an impressive history of community service and engagement dating back to being a Big Sister when she was in high school, while playing on multiple soccer travel teams.

For all of the challenges that come along with being a very diverse community, big cities like Miami have incredible vitality and resources. The business community is eager to participate in events and provides sponsorships and people for things ranging from arts and athletics to community organizations. We can also attract eager young volunteers from around the country, probably due in no small part to the city’s reputation as a tropical party paradise. While urban living certainly has its downsides — noise pollution is highest on my list — after having lived in Miami and also New York City I have definitely developed an admiration for the energy and activity that is concentrated in cities. Quite a change in thinking for a child of the suburbs!