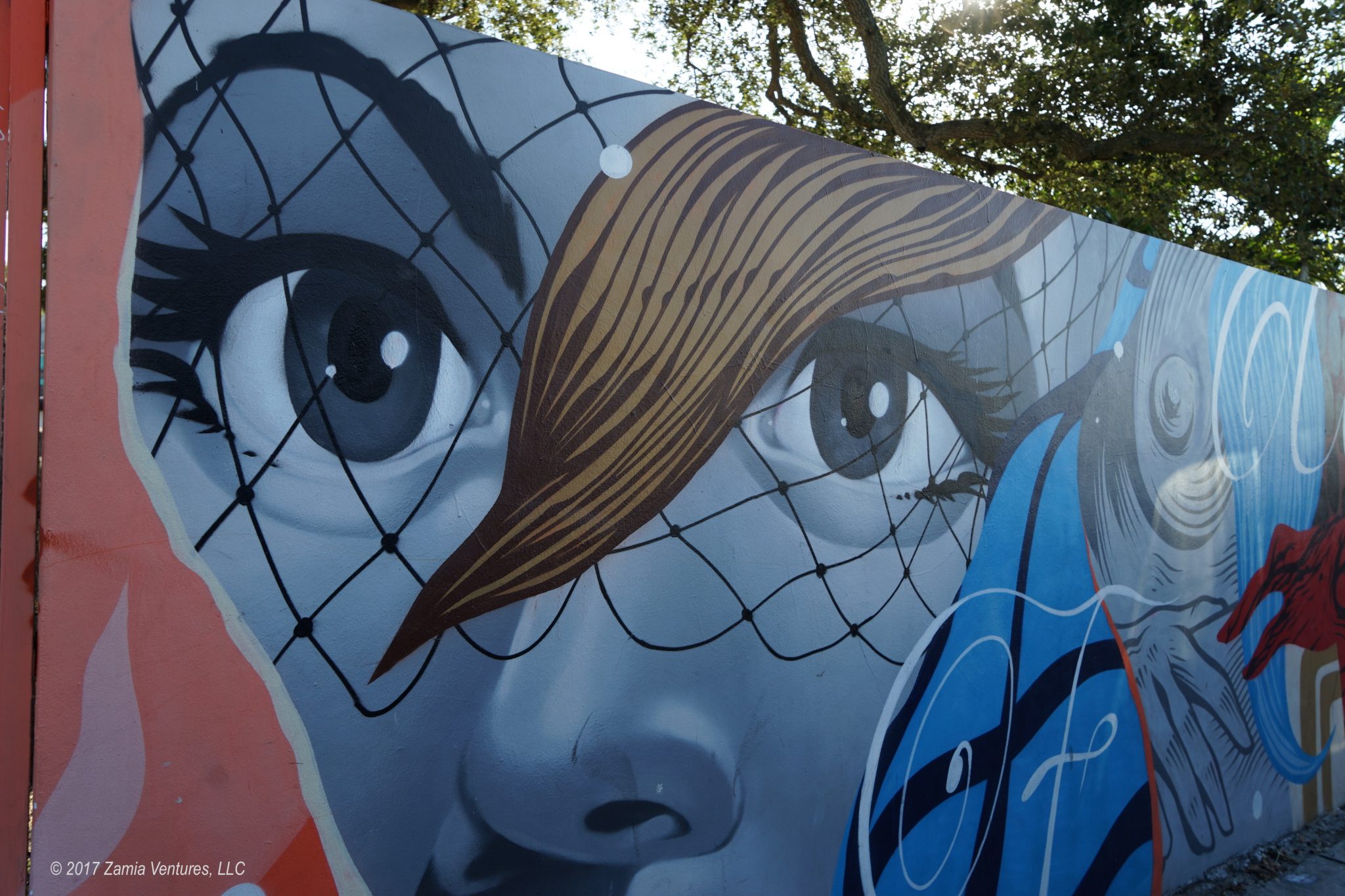 For anyone familiar with Miami 20+ years ago, the phrase “Wynwood Art District” is pretty startling. For many decades Wynwood was an industrial area, located just north of the historically black Overtown community and sandwiched between I-95 to the west and a massive rail yard serving the Florida East Coast Railway to the east. It was an extremely rough area that Miami tourists (and most residents) would have made every possible effort to avoid. Yet Wynwood Walls now consistently appears on Trip Advisor as one of the top 5 things to do in all of Miami! We had to check it out to find out what happened. 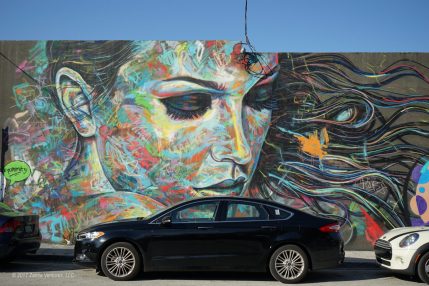 This is street art 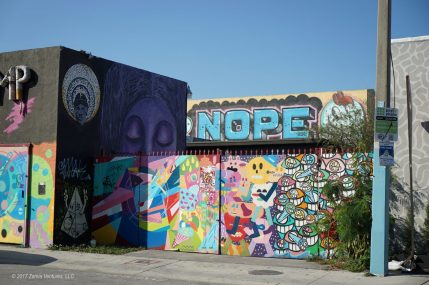 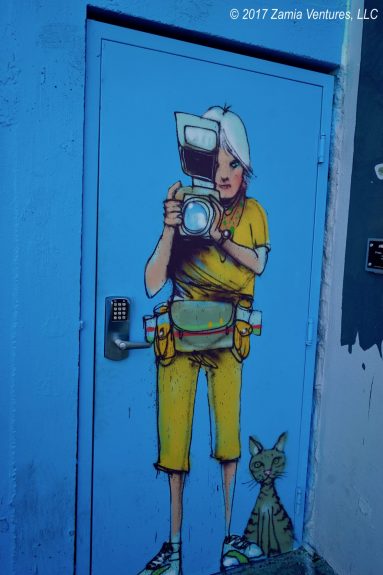 Self portrait? No. I do not own a cat. 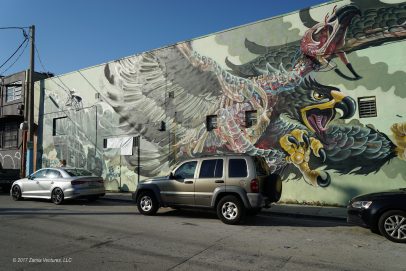 The detail is incredible, but the emerging skeleton is also pretty disturbing. 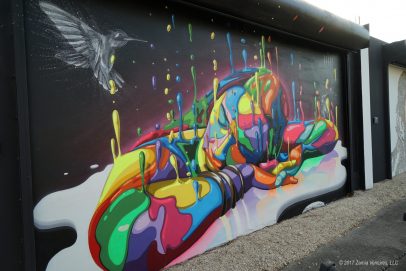 I love the “reverse drips” on this piece.

Specifically, we wanted to learn more about the development of the area and also learn about the “street art” for which the area is famous. So we decided to get ourselves introduced by taking a 1.5 hour walking tour through Wynwood Art Walks, an organization supporting the development of studios and galleries in Wynwood.

Our tour visited several galleries before setting out to see murals located on buildings in the surrounding blocks. The art galleries were all focused on contemporary art, and displayed pieces from modern art luminaries like Andy Warhol, Keith Haring, Jeff Koons and Jean-Michel Basquiat, along with newer, lesser-known artists. 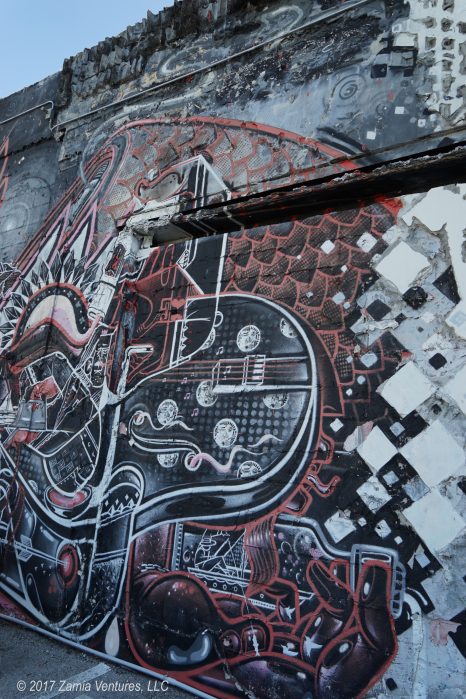 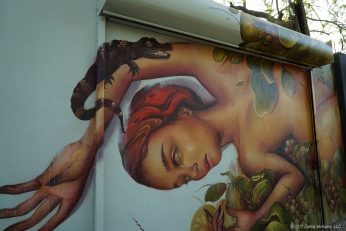 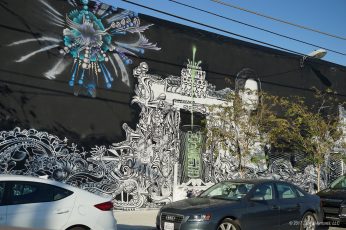 A sponsored piece. Who’s up for a Hype energy beverage? 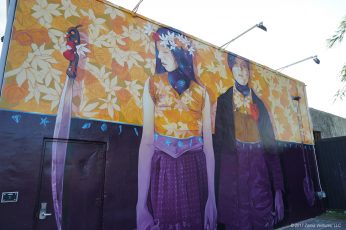 Our guide used the gallery collections to start a discussion of the blurred lines between gallery art and street art. Keith Haring and Jean-Michel Basquiat are  widely-collected artists today but came to prominence specifically for making street art. Shepard Fairey, perhaps the best-known current active street artist who is not Banksy, designed the iconic 2008 “Hope” poster as a piece of art but its reach expanded far beyond the art world and it ultimately became the symbol of President Obama’s campaign. 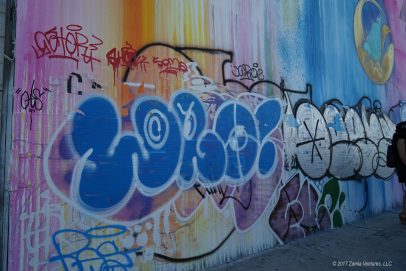 This is graffiti and it is also vandalism. 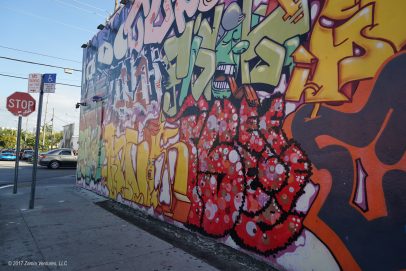 It’s street art, but the style is influenced by graffiti

Another important distinction drawn by our thoughtful tour guide is the difference between street art and graffiti. While both are intended to be visually arresting, the primary audience for graffiti is other graffiti artists — it’s a closed circle of communication, using letters and symbols that are so stylized it’s virtually impossible for the uninitiated to discern the meaning. The goal is to impress other artists with daring acts (e.g., tagging hard to reach locations) and styling.

With street art, the artist intends to reach a broad audience of all passers-by. So the key difference between the two is the artist’s intentions and state of mind… meaning that when art is created anonymously, often at night, it can be challenging to differentiate between street art and graffiti. The main difference seems to be one of style. Graffiti is almost always based on letters / words, while street art tends to include more visual elements. Also, street artists  commonly use media other than spray paint and many have backgrounds in fine arts. 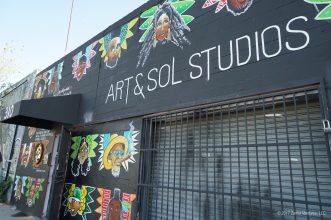 Exterior of a gallery in Wynwood. 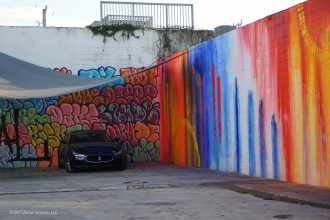 This is Miami. A Maserati parked next to graffiti. 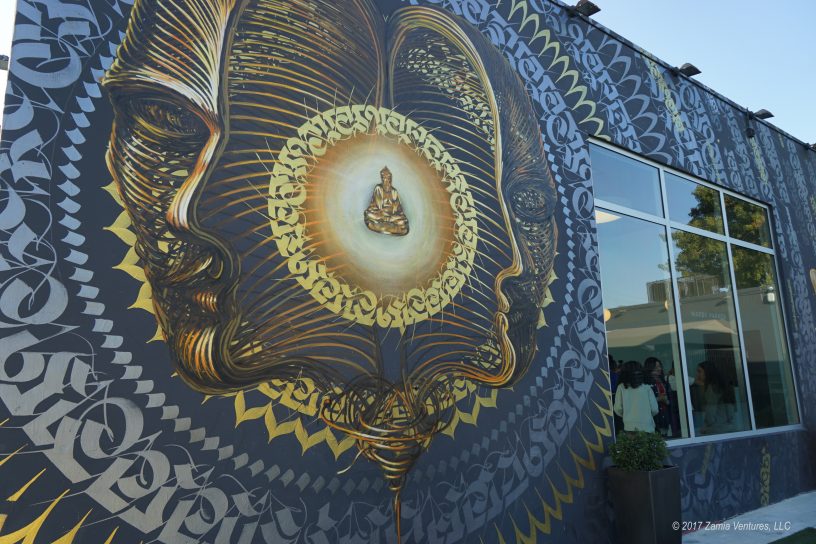 Buddhist imagery on the outside of a Warby Parker. Hipster alert!

The final interesting categorization is “vandalism.” Our tour guide described vandalism by reference to the perpetrator’s state of mind — a person is committing vandalism if they are painting over a surface (including over existing street art) without an intention to create a new work of art. However, I think that vandalism is more properly defined from the perspective of the property owner — if the owner wants the painting, then it’s not vandalism, but if the owner intends the surface not to be painted, then it’s vandalism. This is how a dispute can arise between “It’s art!” and “It’s vandalism!” — both can be true at the same time because the characterizations depend on the states of mind of two different people.

In any event, Wynwood is now so famous for its murals that all the intentional works are considered art and warmly welcomed by property owners. Any new buildings constructed in the area are soon adorned with interesting pieces, typically commissioned by the owners and featuring plenty of media coverage of the creation process. In Wynwood, street art has now moved from the cover of darkness to the marketing spotlight. 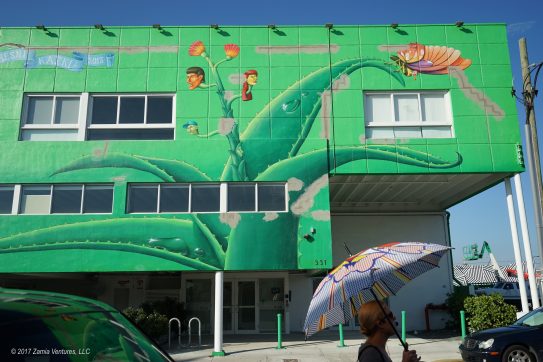 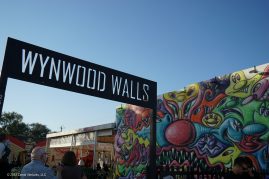 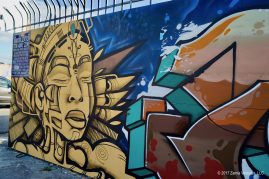 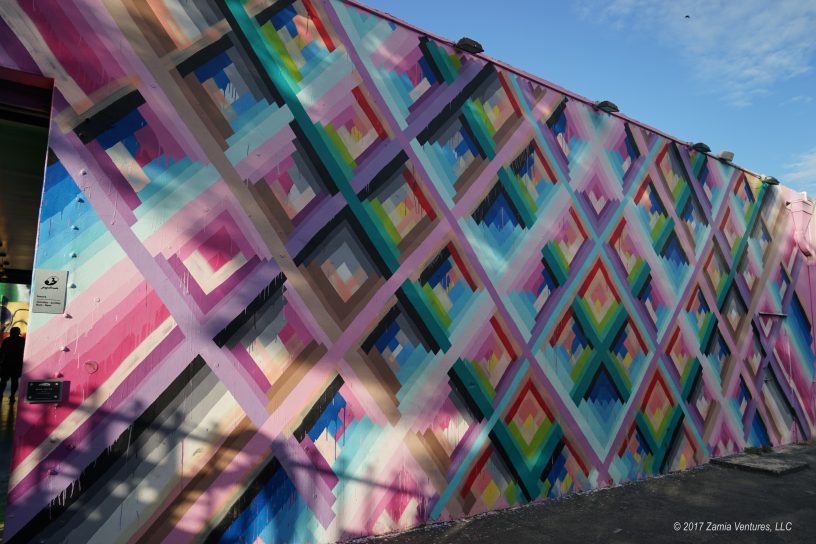 Some of the art is geometric rather than representational

The transformation of the area had several different causes. One was the removal of the Buena Vista rail yards. This 56 acre industrial site was purchased by developers in 2002 with the intention of cleaning up the brownfields and creating a mixed use project similar to City Place in West Palm Beach.

While the project was slowed down by the bursting housing bubble and ensuing financial crisis, Midtown is now a fully-functioning retail center (our closest Target!) with several adjacent residential towers in place and under construction.Wynwood, which is located only 4-8 blocks inland from Biscayne Bay, is no longer cut off from the snazzier waterfront areas by a giant rail yard.

During the same time period that the eastern edge of Wynwood was being transformed, Miami began increasing its visibility in the contemporary art world by hosting the only American branch of the Art Basel show. Art Basel brings close to 100,000 people to town every December to visit the exhibits of hundreds of galleries set up in the Miami Beach convention center, and the scores of spin-off installations and parties that accompany the event. 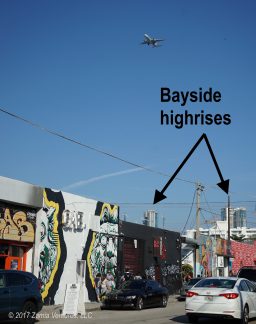 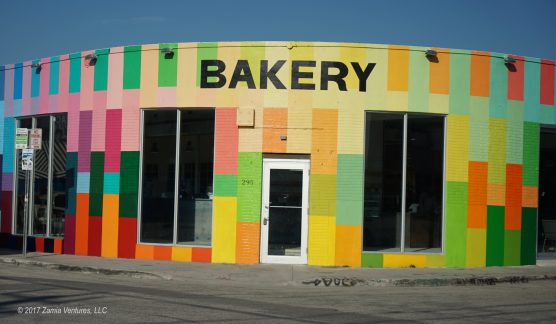 The bakery that supplies our Whole Foods with incredible breads.

All of these external changes were happening at the same time that Wynwood was following a fairly typical path of internal transformation. The old warehouses of the area were attractive to artists because they offered large spaces to work with rock-bottom rents, thanks to most wholesale businesses moving to newer, more convenient distribution areas in the suburbs. The artisan food movement also benefited from cheap warehouses in close proximity to downtown Miami. Today Wynwood is home to three craft breweries (conveniently all located on the same street, 24th Street, within a few blocks of each other) as well as the primary production facility of the bakery that supplies incredible breads to our Whole Foods.

In another important development, a well-known real estate developer / visionary named Tony Goldman took an interest in the area. He was a vital part of preserving properties in the Miami Beach Art Deco District and also a major force in turning SoHo into an arts district. He turned his attention to Wynwood and purchased large numbers of ramshackle warehouses at low prices, renting them out as studio space. He also created the Wynwood Walls, a free outdoor mural area with works by the top street artists around the world. The Walls continue to be curated by the Goldman family and serve as inspiration for aspiring street artists.

Wywnood is definitely unique and worth visiting in Miami. But, as with any transitional area, visitors must take precautions. We visited on an unusually busy Saturday, with a music festival happening in the area, and could only find parking on 21st Street. I was more than a little relieved to see our car was still there when we returned. Our tour guide cautioned visitors against wandering south of 20th Street under any circumstances, but especially at night. Stick to the principal tourist area between NW 23rd Street and NW 29th Street, bounded by NW 2nd Avenue on the east and NW 6th Avenue on the west. Also, while the nightlife is famous, the walls are best enjoyed in the daylight, so come for lunch at one of the many interesting restaurants in the area. We will be back to explore on our own, especially to check out the breweries. 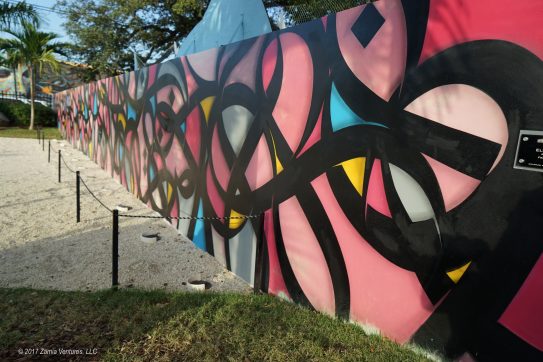 A long abstract at Wynwood Walls 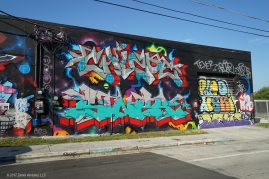 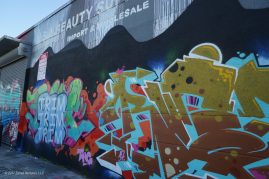 Many building exteriors still show traces of their prior life as wholesale warehouses. 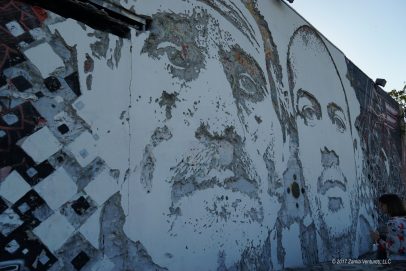 Portraits made with a very unique art process of applying concrete and chipping it away to make the images in reverse. 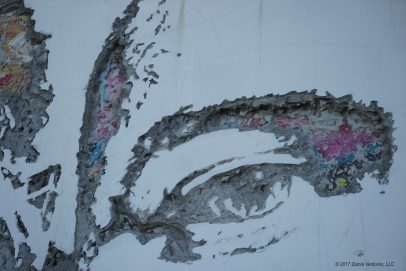 Detail of the chipped concrete process.

Big Heads and Other Monumental Art

1 thought on “Learning About Street Art in Wynwood”