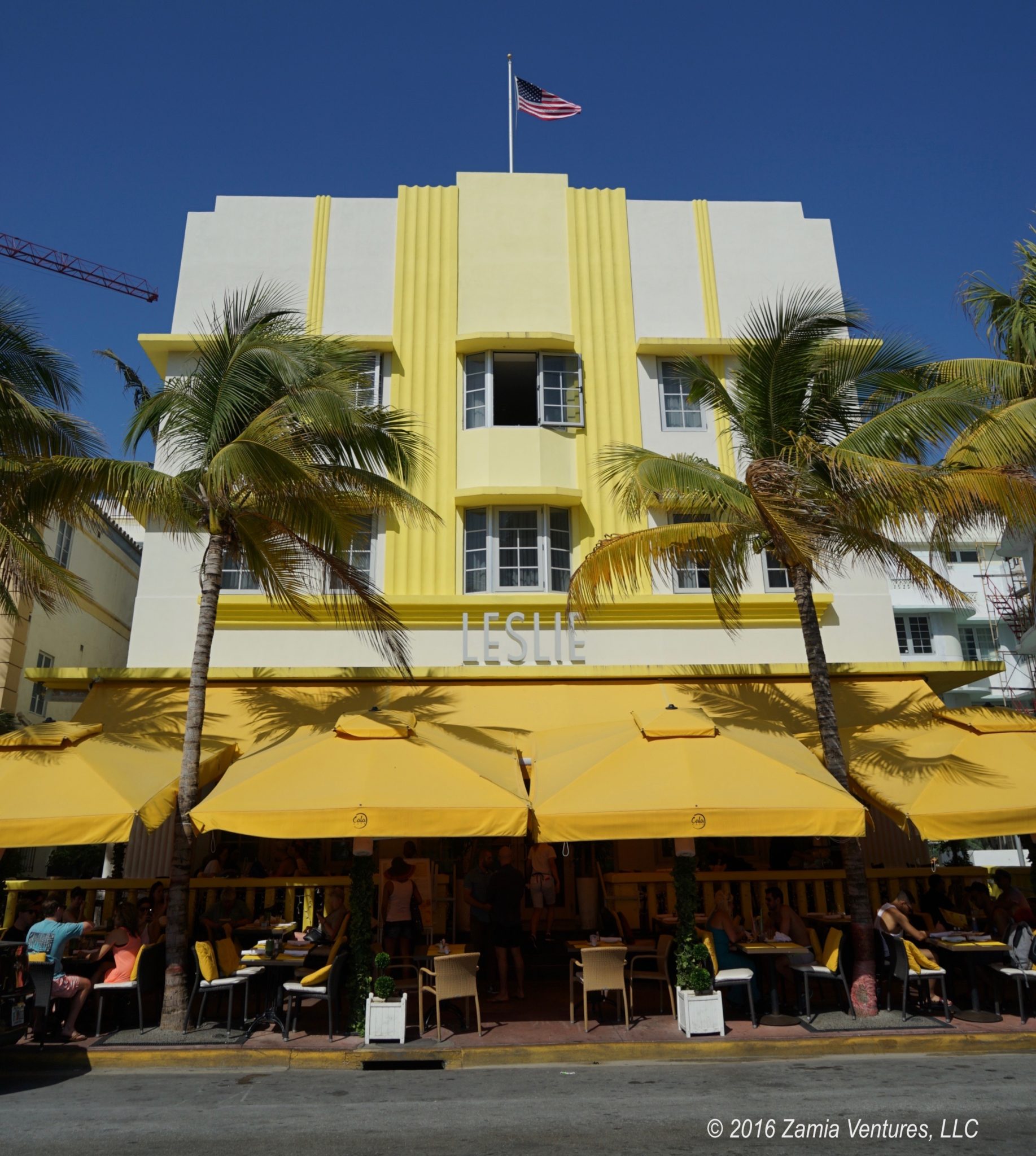 No Miami blog is complete without plenty of photos of Art Deco architecture, right?

Our continuing exploration of Miami history naturally brought us to the Miami Beach Architectural District, a/k/a the Miami Art Deco District. This federally designated historic district includes 960 (!) contributing structures in South Beach, the southern portion of the barrier island off the coast of Miami.

How did this happen?

There’s a logical explanation for the incredible proliferation of buildings sharing a common architectural style in this area.

But first, some background.

As you know from my Julia Tuttle post, Miami was essentially a wilderness prior to the extension of Flagler’s Florida East Coast Railroad in 1896. At that time, the main activity on the virtually empty barrier island that now is home to Miami Beach was an agricultural business operated by entrepreneur and visionary and/or wacko (depending on your perspective) John Collins. When his attempts to grow vegetables in a mangrove swamp (predictably) failed, he turned to tourism and development as potential opportunities. This was a good thought, since Miami was in fact becoming a fashionable winter destination. However, his plan — to build a three-mile bridge across Biscayne Bay to provide tourists access to the beach — was ambitious (or just plain crazy). The venture ran out of funds, but was saved at the last moment by an investment by automotive parts millionaire Carl Fisher. Finally, the Collins bridge opened in 1913 and several homes, hotels and even a golf course were constructed over the next several years as part of Florida’s famous land boom of the 1920s…. until all the activity was cut short in 1926.

Of course there’s a hurricane involved.

The 1926 Atlantic hurricane season dealt Miami a severe blow, when a major hurricane made landfall near Miami in September. The “Great Miami Hurricane” of 1926 brought winds estimated to be up to 145 miles per hour to a community filled with residents who were mostly recent arrivals in South Florida and, in all likelihood, had never before encountered a hurricane. The hurricane’s large size created massive storm surge that overtopped all of Miami Beach, completely destroying most structures on the island and cutting off communications with the mainland. Miami Beach had barely cleaned up the debris when, three years later, the stock market crash of 1929 heralded the beginning of the Great Depression. Miami Beach investors, notably Carl Fisher, lost their fortunes and were unable to make further investments in developing the city. Americans facing 25% unemployment certainly were not clamoring to take vacations to tropical destinations. The incipient tourism industry in Miami was back to square one.

Finally, it all turned around.

Eventually economic recovery began to take hold, and tourist interest in Miami and its beaches returned with a vengeance. A second building boom occurred in the 1930s, far bigger than the boom of the 1920s, which began with a clean slate of vacant property thanks to the incredible destruction of the 1926 hurricane. Investors built hundreds of relatively modest rooming-houses for seasonal use during the 1930s and 1940s, which were built in the dominant styles of the times. This flurry of construction in a short period of time concentrated  distinctive architecture in the South Beach area. 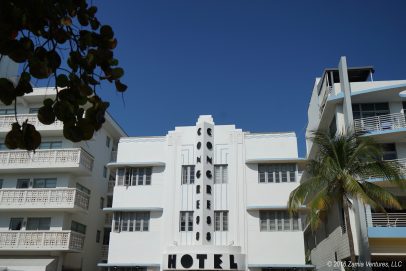 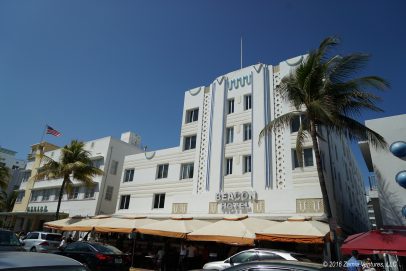 Florida’s earliest hotels and mansions were heavily influenced by Mediterranean architectural styles, since the promoters, developers and architects were consciously emphasizing the link to warm climates. Some of the early hotels in Miami Beach, such as the Edison, include the arches, roped columns and other details that evoke the Mediterranean. However, this style was never as dominant in Miami Beach as it was in other communities like Coral Gables, exemplified by the famous Biltmore Hotel.

Instead, hotel builders in Miami Beach in the 1930s and early 1940s primarily used Art Deco style, particularly the version of the style known as Streamline Moderne that emerged later in the Art Deco period. This architectural style retained the emphasis on symmetry of Art Deco while employing industrial-influenced designs, aerodynamic styling, and newly developed materials like glass bricks and metal elements. 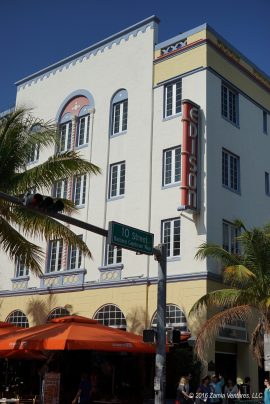 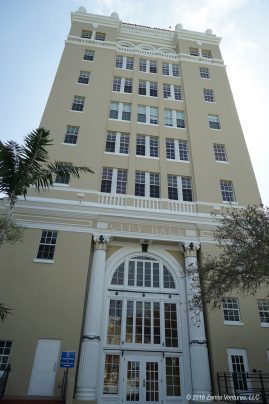 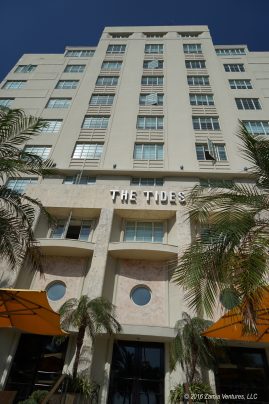 Learn about the history of the Miami Beach Architectural District from the website and small museum of the Miami Design Preservation League, a non-profit organization formed in 1976 to protect the architectural heritage of Miami Beach. The MDPL offers daily architectural walking tours which we recommend for those interested in learning more.

For more photos of a small fraction of the buildings in the Miami Beach Art Deco District, visit the gallery: 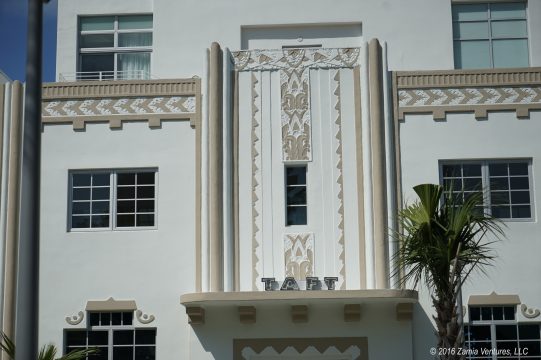 Detail of the Taft 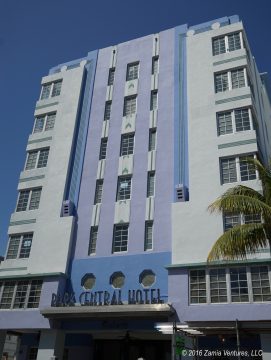 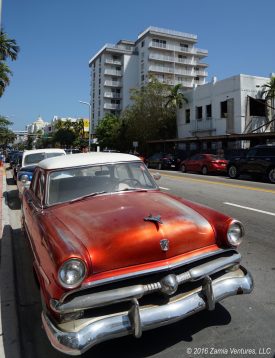 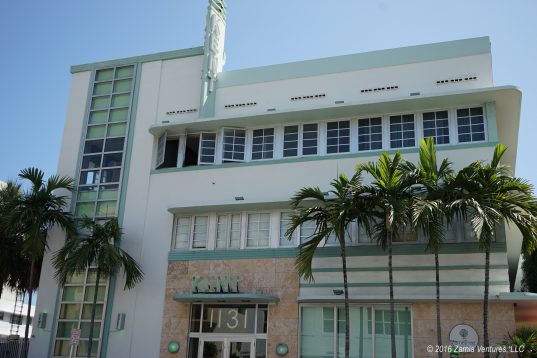 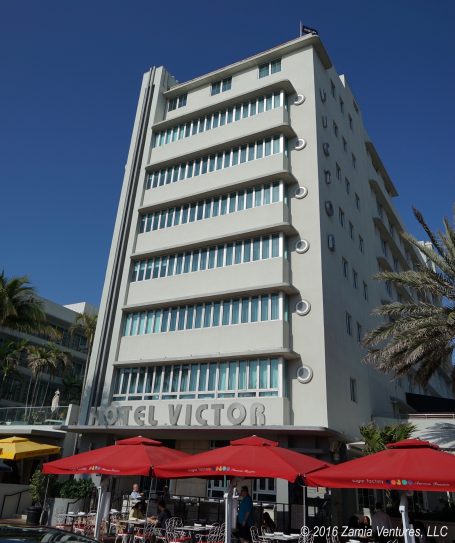 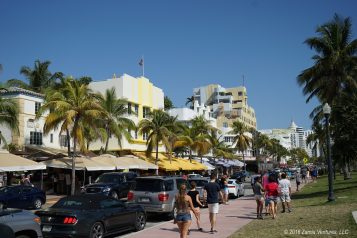 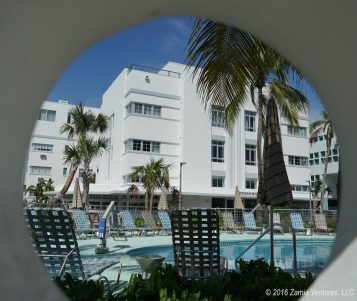 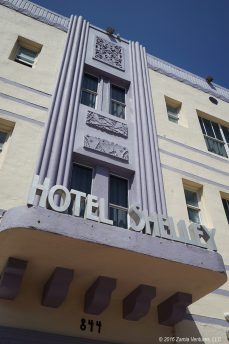 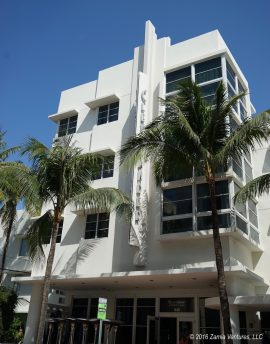 The Clevelander Hotel on Ocean Drive 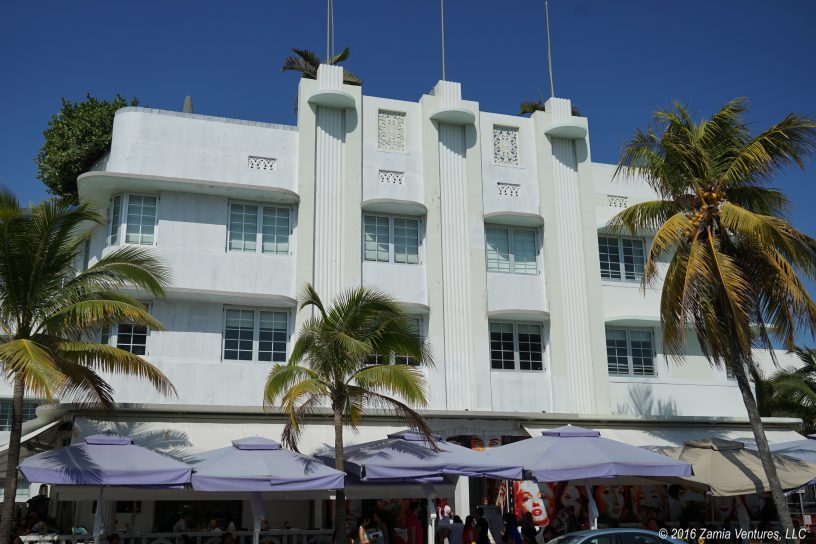 The Carlyle on Ocean Drive – symmetrical with rounded “eyebrows” above windows