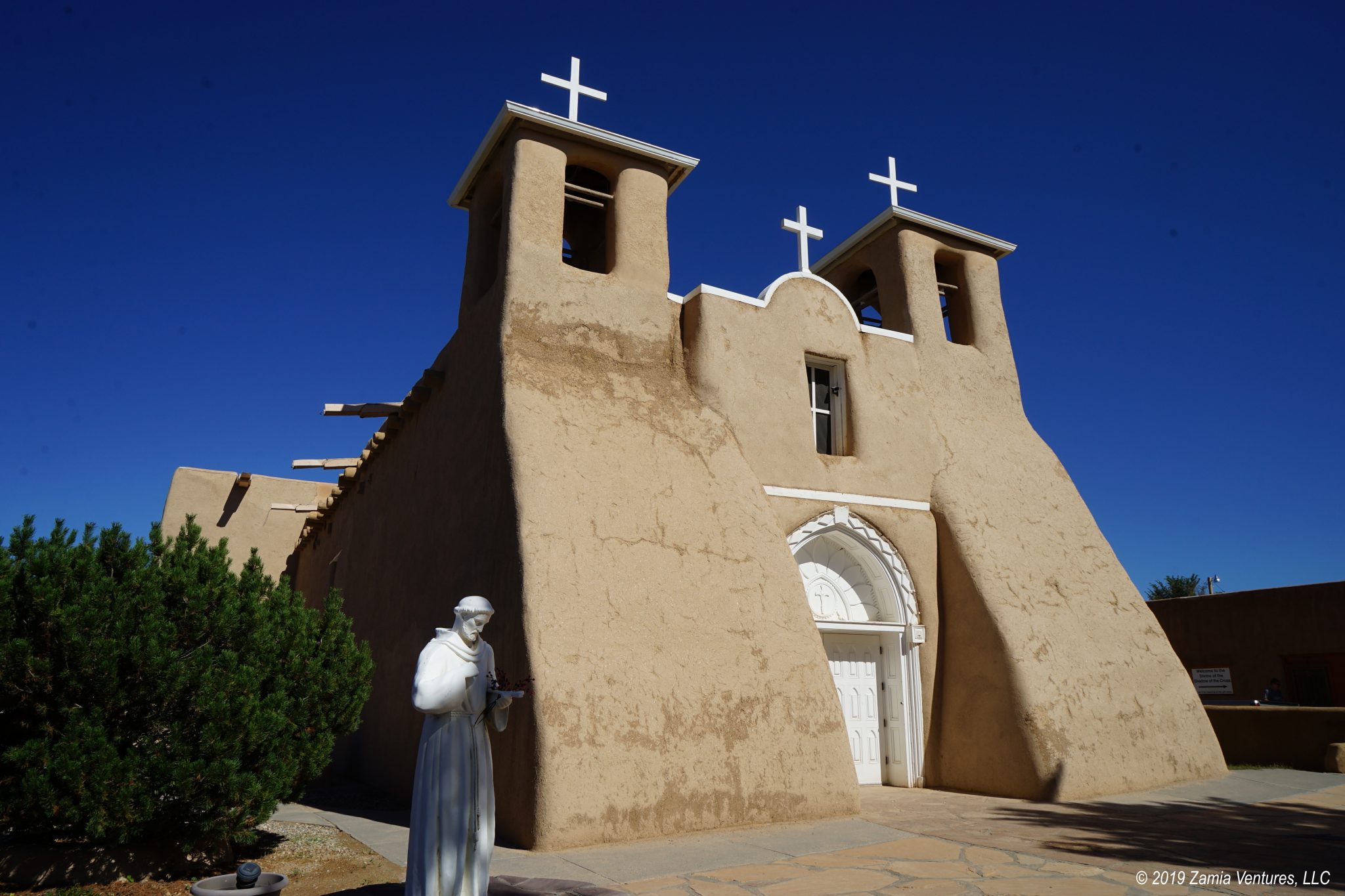 On our first day visiting Taos, as our very first activity, we visited the San Francisco de Asis Mission Church (pictured above) in the small suburb of Ranchos de Taos. We reached the 18th century church via a maze of narrow, unpaved, muddy roads with Spanish names. The plaza of the church is ringed by adobe structures in various states of decay. In the plaza we saw pasty white tourists toting cameras circling the church, while two older men leaned against a wall under a shade tree and conversed in Spanish. I haven’t spent much time in Mexico, but this scene is pretty much exactly what I would expect to see in a small Mexican town with a historic church.

From our very first experience, New Mexico has a much stronger Hispanic feel than any place we have encountered since leaving Miami. I expected Tucson, where we spent a month last winter, to be more Latin-influenced given its close proximity to Mexico, but I suppose that the legions of retirees fleeing northern winters, Air Force personnel posted at the air base, and people from all over the world associated with the University of Arizona have diluted Tucson’s original Hispanic character. Not so in Taos, which remains a very small town (under 6,000 people) tied closely to its historical Mexican and Native American roots.

Another of our first stops in town helped us dig into the deep cultural roots of the area: the small but terrific Millicent Rogers Museum. Focused exclusively on the arts and crafts of the southwest, the museum deftly illustrates the history and interaction of Native American, Hispanic, and Anglo peoples in the area. The setting of the museum in a historic hacienda is an ideal atmosphere for the presentation of the cultural objects.

The museum helped explain a lot of the striking aspects of southwestern design. In Hispanic works, particularly religious works like carved santos, the persistence of highly idiosyncratic folk art styles is explained by the remoteness of the region and the relative lack of contact with European artisans or materials. The extreme violence of the depictions of Christ and saints is attributed to the harshness of life in a difficult and remote place. The museum had small but interesting displays on some of the classic Hispanic crafts of the region like tinwork and straw applique, along with a heavy emphasis on sacred artwork ranging from the historical to the modern. 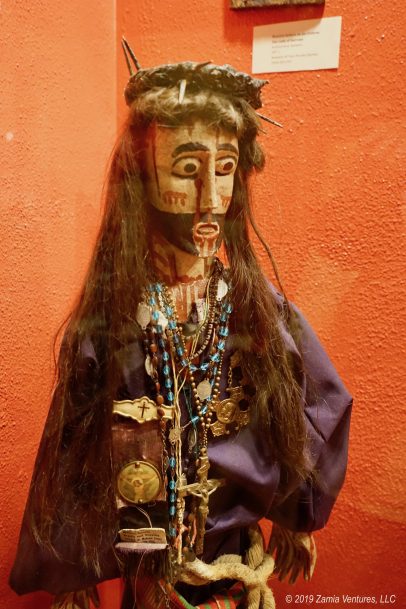 Not your typical Jesus from a typical Catholic church 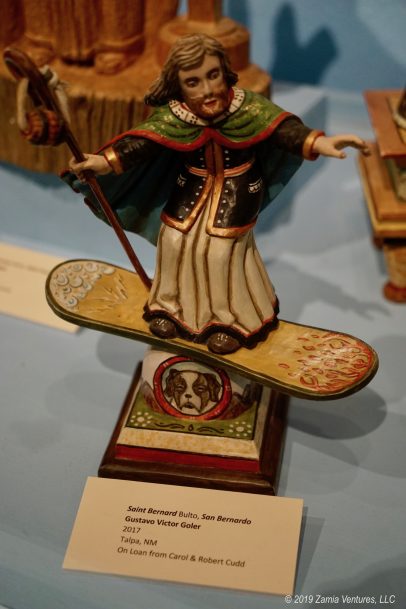 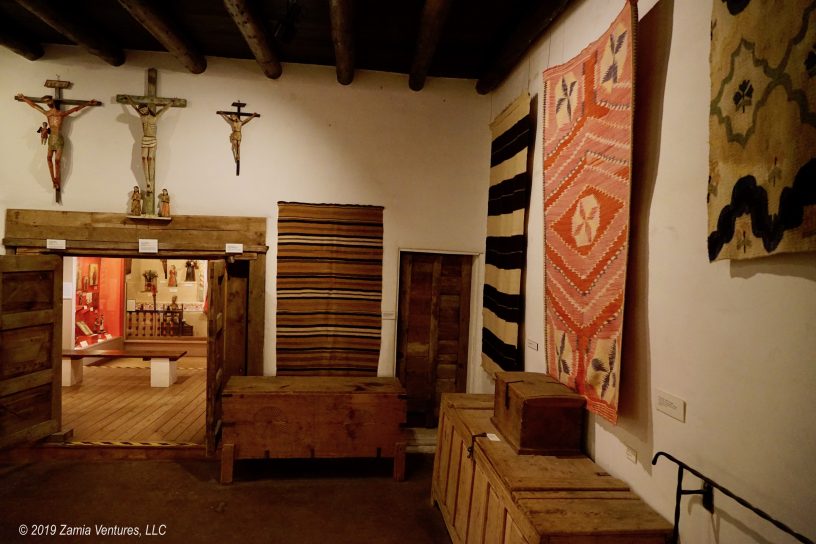 Native American crafts are illustrated with collections of textiles, pottery, baskets, and jewelry, and each collection shows the evolution of the craft. In every case, the craft went through three basic stages. The oldest works — made before the advent of significant contact and trade with the East Coast — were produced for personal use or trade with other tribes. Once transcontinental train service brought entrepreneurs to the area, each craft went through a phase of being produced primarily for an export market, often using new materials like chemical dyes, with designs that the purchaser-exporters believed would appeal to eastern buyers. Finally, each of the crafts evolved in the modern era into a vehicle for personal expression of artistic intent. 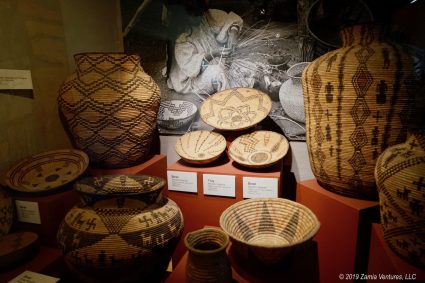 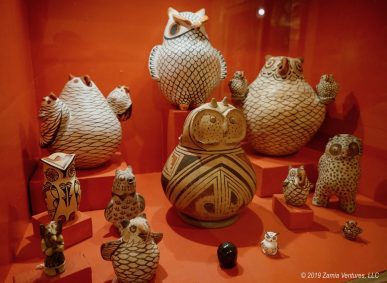 Owl motifs on pottery ranging from pre-Colombian to modern

Taos is known for its visual art, so of course we made it a priority to spend time wandering through some galleries. One gallery representative told us that Taos County, NM has in absolute numbers — not percentages — more working artists than any other county in the US other than Kings County, NY (Brooklyn). I haven’t been able to verify that claim, and I am quite skeptical that this could be true for a county with under 35,000 residents, but there is no question that Taos is a significant center for the arts. Anglo artists have been coming to Taos for a hundred years to take in the brilliant light, colorful sunsets, and unique architecture and produce works inspired by this landscape. The historic downtown area is just packed with dozens of galleries ranging from tiny places with storefronts barely wider than a single door to large spaces made of several connecting buildings. There were works in every style and many different media. You know an art scene is pretty serious when a town has both an Artist Collective and the Taos Community Center Art Co-op. 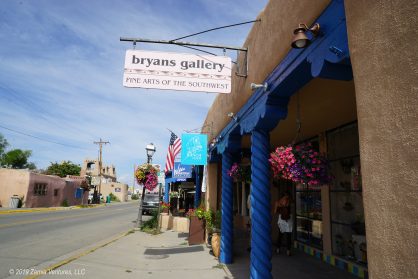 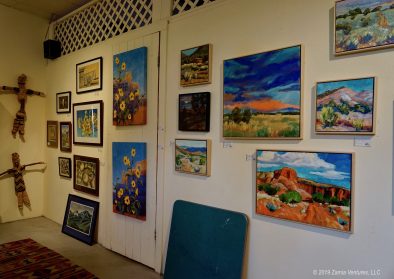 Not fancy, but the works are good

We probably went in a dozen galleries, and there were dozens more that we passed by without visiting. Some of our favorites were Bryans Gallery (mostly historical and contemporary Native American works), Wilder Nightingale Fine Art (local painters with an eclectic array of styles), and Copper Moon Gallery (sculptures and artwork from different artists sharing a whimsical flair). We also wandered through the Plaza area of the downtown, where we caught the tail end of the weekly farmer’s market. The vendors appeared to be actual local farmers and ranchers, with different specialties in fresh vegetables, meats, and cheeses. The buildings in the downtown historic are uniformly built in the classic adobe style, with those ubiquitous blue doors, making for a pleasantly cohesive feel throughout the city center. 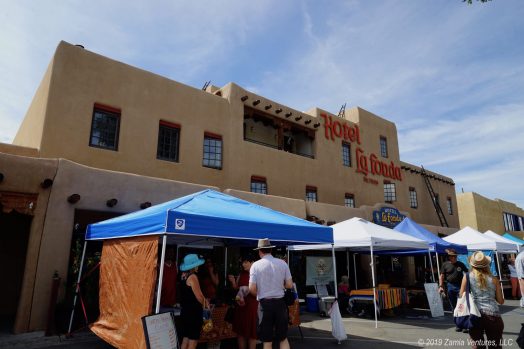 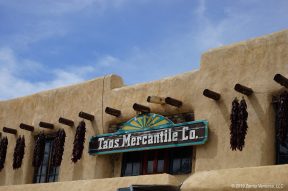 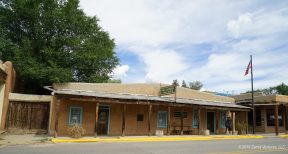 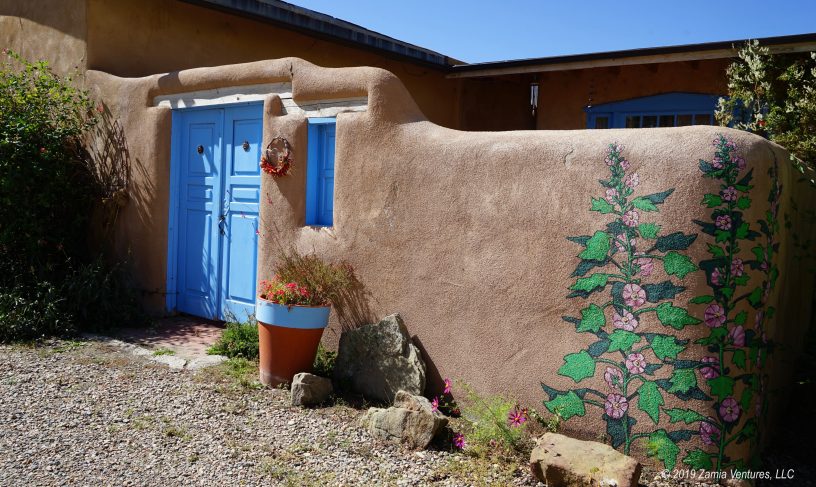 We stopped for lunch one day at a little hole-in-the-wall Mexican place, and as one might expect everything we ate at La Cueva Cafe was outstanding. Our entrees (enchiladas with various sauces — green chili for Ken, mole poblano for me) were tasty and authentic, but for me the real standouts were the house made roasted chili salsa and guacamole served with freshly made tortilla chips. 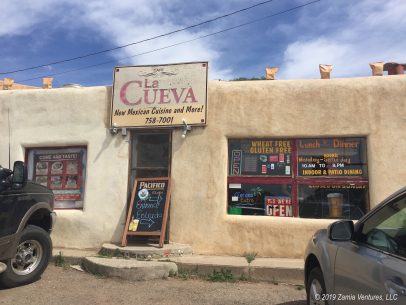 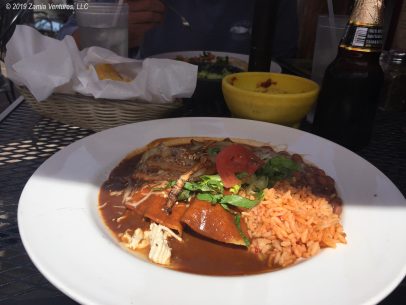 While we appreciate and enjoy art, we are also well aware that “up-and-coming artsy enclave” is realtor-speak for “dumpy area near railroad tracks where you might not feel comfortable leaving your vehicle overnight.” Artists, especially those of the starving variety, tend to find workspaces that are cheap, and cheap usually means undesirable. There is no better example of this than the trendy Wynwood area of Miami, which we visited to check out its famous street art, but which is also infamous among locals for historically being hands down the most dangerous part of a fairly crime-ridden city. 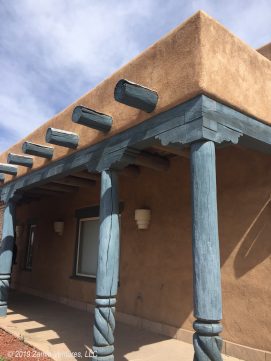 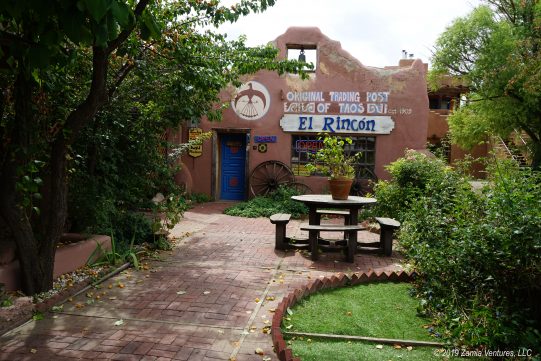 Taos Canyon, which we drove through each time we traveled from our campsite into town, had quite a few studios lining the narrow canyon. At the same time it also had many things that I consider indicators of high poverty areas: Homes built from a seemingly ad hoc collection of building materials, including shipping containers used as parts of structures. Rusted out cars sitting in overgrown yards. Ancient RVs turned into permanent housing with the addition of a permanent roof and decking areas. Road signs and historical markers riddled with bullet holes.

All this left us on the fence as to whether we found Taos more charming or shabby. In the end, the friendliness and openness of the people we encountered in town and in the state park had us leaning toward charming. Even though it was surprising to see so many crumbling adobe structures, weirdly assembled groups of buildings, and dirt roads, we certainly never felt unsafe or uncomfortable.

Our campsite for the week was at one of the many New Mexico state parks focused on a lake. Eagle Nest Lake State Park is about 30 miles east of Taos, but the winding road through Taos Canyon meant that our trips into town lasted about an hour each way. Fortunately our spot in the Lakeside Campground offered us plenty of activities for days when we didn’t make the drive into town. 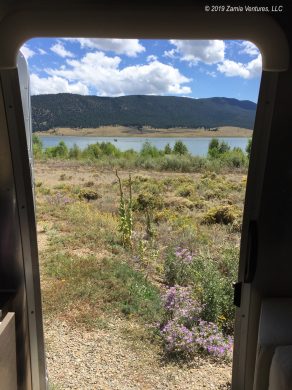 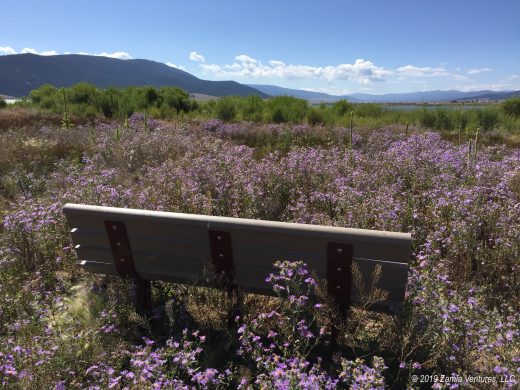 When flowers block your view…

The large lake is a haven for water birds, and we enjoyed seeing white pelicans, great blue herons, and ospreys skimming over the lake. The shore areas were alive with songbirds and bursting with late season wildflowers. Red tailed hawks patrolled the skies over the entire valley. The campground was alive with scampering ground squirrels who amused us with their curiosity.  There were trails along the edge of the lake heading both north and south from the campground, rolling gently through fields of wildflowers and offering views of the lake. Our campsite was enormous with unobstructed views of the lake, and a real bargain at $10/night. We even enjoyed one of the famously colorful Taos sunsets one evening. 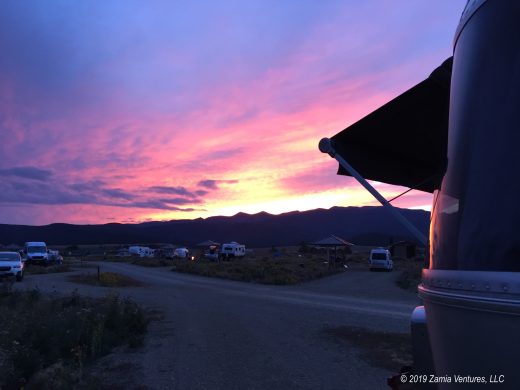 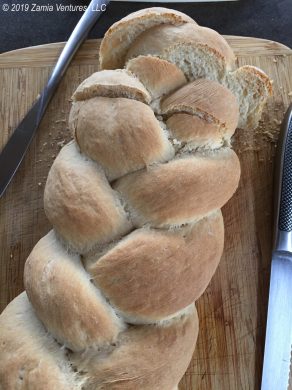 Cooler temperatures inspired me to do a project that I have been waiting for all summer: trying to bake yeast bread at high elevation. With our campsite sitting at well over 8,000 feet, I figured this was a great place to figure out why baking books always have special instructions for those at high altitude. Spoiler: making bread was basically the same as usual. I added some extra water to the dough to compensate for the very dry air. With lower air pressure, the yeast definitely caused the dough to rise more quickly, but the rise time was only reduced by about 25%. If I hadn’t been scrutinizing the process I might not have noticed the difference at all. The upshot is that, based on my single totally unscientific experiment, RVers who like to bake should not be afraid to visit Colorado and New Mexico.

During the last three days of our stay we were plagued by cold, windy, rainy conditions, so we never made it out to see the Rio Grande gorge or Rio Grande del Norte National Monument. We have something to look forward to during our next visit, and the rain did provide one unexpected benefit:

Next we head to Santa Fe for more art, museums, and history in the state’s capital.