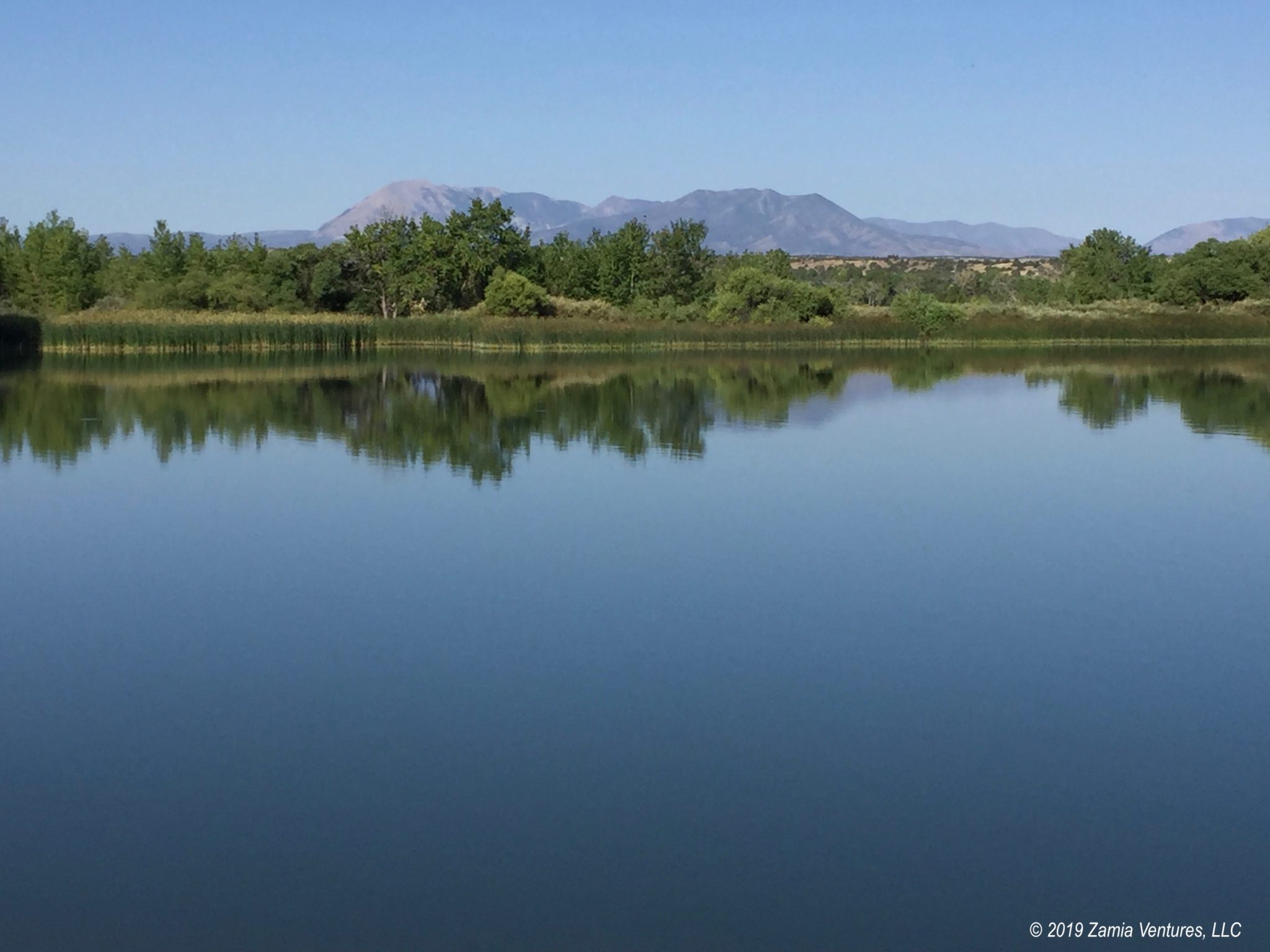 When we originally planned our summer sojourn in Colorado, for this past week we had penciled in a stay at yet another scenic national forest campground near Salida/Poncha Springs — O’Haver Lake. But several weeks ago we reevaluated our situation and decided that we wanted to do something different. O’Haver sounds very charming, but it has several features we dislike. It reportedly has no cell service, which was really unappealing after spending the prior 2.5 weeks with no internet. Lack of access to news was even more annoying than usual during a period that a gigantic hurricane was bearing down on our friends and family in Florida. O’Haver Lake sits at over 9,000 feet of elevation, and we expected that nighttime temperatures would be dropping down to freezing or below. Finally, it’s a first-come, first-serve campground which means that we had no assurance of getting a spot during the week after Labor Day, or a spot that would give us enough open sky for solar power generation. Instead, we changed directions and booked a stay at Lathrop State Park near the booming metropolis of Walsenburg, CO (pop. 3,000), putting us in reach of our next planned stop outside Taos, NM. Since we had purchased a Colorado state park pass earlier in the summer, we could reserve a spot with electricity, good cell service, and showers at a not-completely-extortionate rate.

Flexibility vs. Plans While RVing

Before we hit the road we expected our travel to be fairly unstructured: we would stay someplace until we got bored, and then move to the next location. But several things have changed our mind about this. One important issue is that campgrounds are full of RVers, and the very best places — including the prime spots in public parks that we really love — often fill up as soon as the reservation window opens months in advance. There is no such thing as wandering into a popular park like Yellowstone or Rocky Mountain National Park and finding an open site that can accommodate our rig, even during shoulder seasons. We also discovered that we need to fight our own tendency toward procrastination; having a set amount of time in a particular location forces us to get out and do the things on our list of planned activities for the area.

We have also found over time that it makes us much more comfortable to have reservations in advance. Scoring a spot in a first-come, first-serve campground is always a gamble, and that’s particularly true when we won’t have hookups and will need to rely on open sky to generate solar power. Reservable spots (including at Moraine Park Campground in Rocky Mountain National Park and in national forest campgrounds like Rosy Lane near Crested Butte and Junction Creek in Durango) let us review satellite maps to confirm whether a potential campsite is open, heavily treed, close to roads, close to other sites, weirdly angled or shaped, etc. Even when planning a long-distance relocation, where a camping site will be used just for one night before we hit the road again, we prefer to pay the approximately $35 to reserve a site. Travel days are usually pretty stressful, and the last thing we want to deal with after a long drive is arriving at a planned camping location (like a first-come, first-serve campground, Walmart parking lot, BLM land, or city park) only to find that it doesn’t work out because all spots or full, or because of overnight parking restrictions, bad roads, or sketchy conditions.

One downside of making reservations far in advance is that it’s hard to accurately anticipate exactly what we’ll want at that future time. When we originally made our plans to stay at O’Haver Lake, we had spent months in the desert southwest and couldn’t wait to see trees again. At this point, however, we feel that we’ve seen our fill of trees this summer so we were happy to beg off the scenic lake surrounded by a forest in order to get some creature comforts.

Having all these reservations in place means being willing to break them when necessary. This may be because of health issues, weather issues, or just change in preferences. Paying a $10 cancellation fee when plans change is, for us, a small price to pay for having peace of mind about where we will be staying in the future. We are currently living the full-reservation lifestyle, with spots booked through the end of next April with a few small exceptions. Mostly that’s because we are spending the winter in Florida, and spots in Florida state parks are snapped up as soon as the 11-month reservation window opens, but it’s also how we’ve evolved in our RVing.

Lathrop State Park turned out to be everything we hoped for. Our site in the Pinon Campground was enormous, had lovely views of the Spanish Peaks, and was nicely separated from other sites. The internet was fast and the showers were hot.

The park has two trails, and we walked one or the other daily. The Hogback Trail is fairly short at under 2 miles but somewhat strenuous, since it travels a few hundred feet up to the top of the Hogback formation that runs along the north side of the park and then continues along the narrow ridge top before descending a steep path. Even though the elevation gain is pretty modest, views from the top of the ridge across the flat park were impressive. 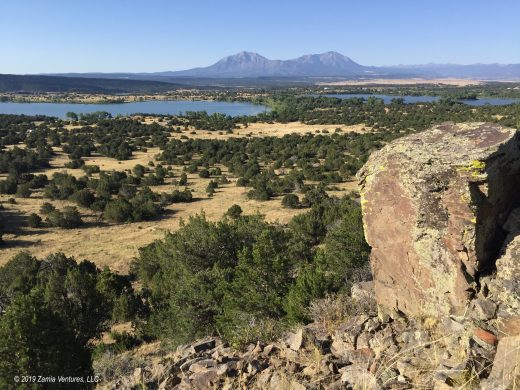 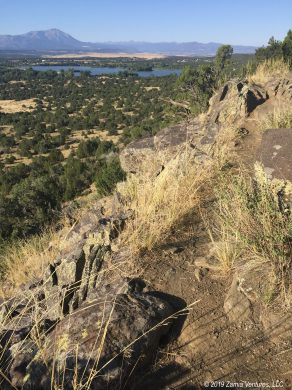 The Cuerno Verde Trail is an easy 3 mile loop along a wide, paved pathway around the circumference of one of the park’s two lakes. The trail runs past many of the prime recreation areas, including the swim beach and boat ramp, and through different environments ranging from open fields to shady cottonwood stands. 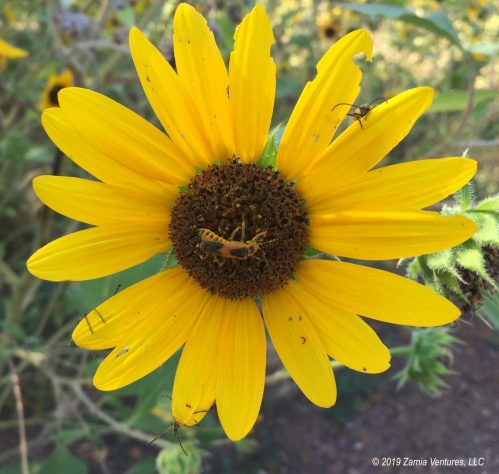 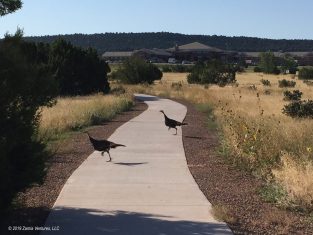 Turkeys fleeing from us 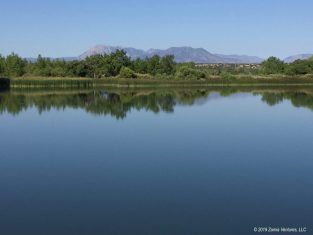 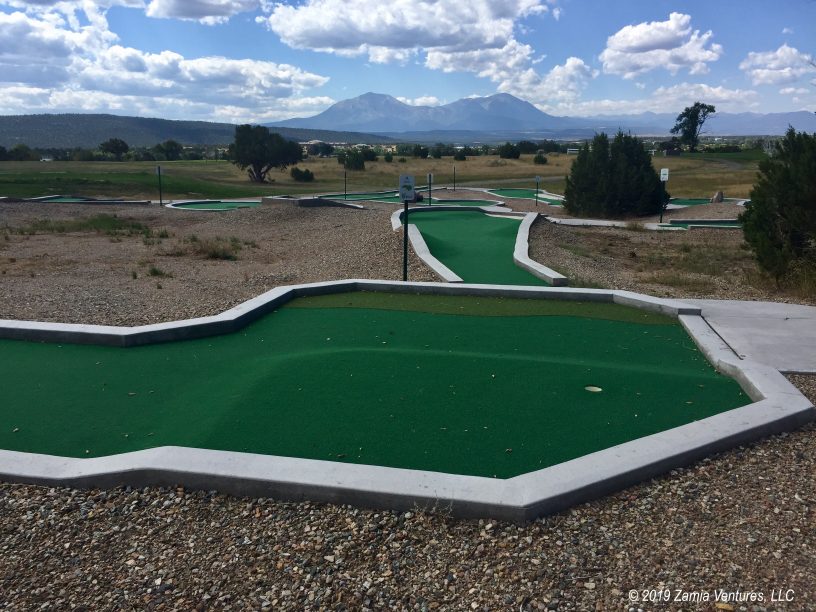 Mini golf with a view

The park even includes a 9-hole golf course and a mini golf course. Sadly, though we hoped to have a knock-down, drag-out mini golf tournament to end all mini golf tournaments, the golf facilities were closed when we wanted to play because of aeration of the course. Although we had no over the air TV, internet service was sufficiently solid to stream several shows including a few NFL games. We were so satisfied here that we only left the park once, for a quick trip to town for groceries. Everything was going great, which was a signal to the universe that it was time for ….

With the benefit of electricity and solid internet, I tackled a blog project that was significantly overdue. I initially signed up for my web hosting service back in 2011 when I was working as a consultant and needed a web presence. In terms of internet eras, 2011 is roughly equivalent to the Bronze Age – slightly ahead of the Stone Age of homemade HTML sites, but still hopelessly archaic. For improved functionality I really needed to change to a new hosting platform with more modern features on the back end. This required several steps: selecting the new hosting service, transferring the entire content of the blog onto the new platform, and changing the domain zamiaventures.com to point to the new location of the blog. I made the highly questionable decision to handle this myself, and this proved to be every bit the gigantic pain in the you-know-what that I feared it could be.

For people who want to get into the weeds: the SQL database transfer was nearly flawless, meaning that written content of posts, locations markers on maps, comments, the mailing list for post notifications, and blog characteristics like composition, font, and color all transferred seamlessly to the new host with just a few manual modifications on my part. The transfer of the media library (i.e., photos and other images), in contrast, was a complete cluster$#%. And if you’ve been reading the blog, you know that I post a LOT of photos. The 25 separate .zip files containing the media library turned out to be corrupted in their sequencing, so it wasn’t possible to reconstruct them properly on the receiving end. The really big mistake I made was dismantling key parts of my old hosting setup before the conversion was complete, so there was no way to go back and try to find an alternate way of porting the media library. I ended up using the terminal interface on my laptop to go into unix for .zip -FF file recovery, then unpacked the repaired files, then transferred thousands of image files directly into the new host directory structure via FTP. I was certainly glad to have our unlimited data plan, since there is no way this process could have been completed while trying to conserve on data usage. While all this was going on, it was hard to get a handle on how well it was going, since domain changes generally take 24-48 hours to propagate out through the internet. Several steps in this process had to be put on hold until those domain changes were processed, which made the whole endeavor even more tedious.

The upshot of all of this is that the blog is up and running, but with quite a few holes in the media library. I’ll be filling in the gaps in reverse chronological order, but that will take a while. Blog readers: if you pull up older posts and see an empty white box where there should be a picture, it’s me, not you.

Despite all of this, there is good news. I learned quite a bit about the architecture and functioning of WordPress, and had my first opportunity to manipulate SQL databases. I can now provide (available upon request) a comprehensive list of just about everything not to do when transferring one’s blog to a new hosting platform. Should I decide to go back to work, the IT field is growing at a healthy clip – unlike law. Last but not least, after days spent watching file names scroll across my screen I think I am one step closer to confirming whether The Matrix is fact or fiction.

Next: we finally leave Colorado after an action-packed summer and head to New Mexico for the fall.

Walking Ancient Pathways at Cumberland Gap NHP, and Foiling the Plans of a Homicidal Park Ranger

8 thoughts on “Change of Plans in Walsenburg, and Technical Difficulties”