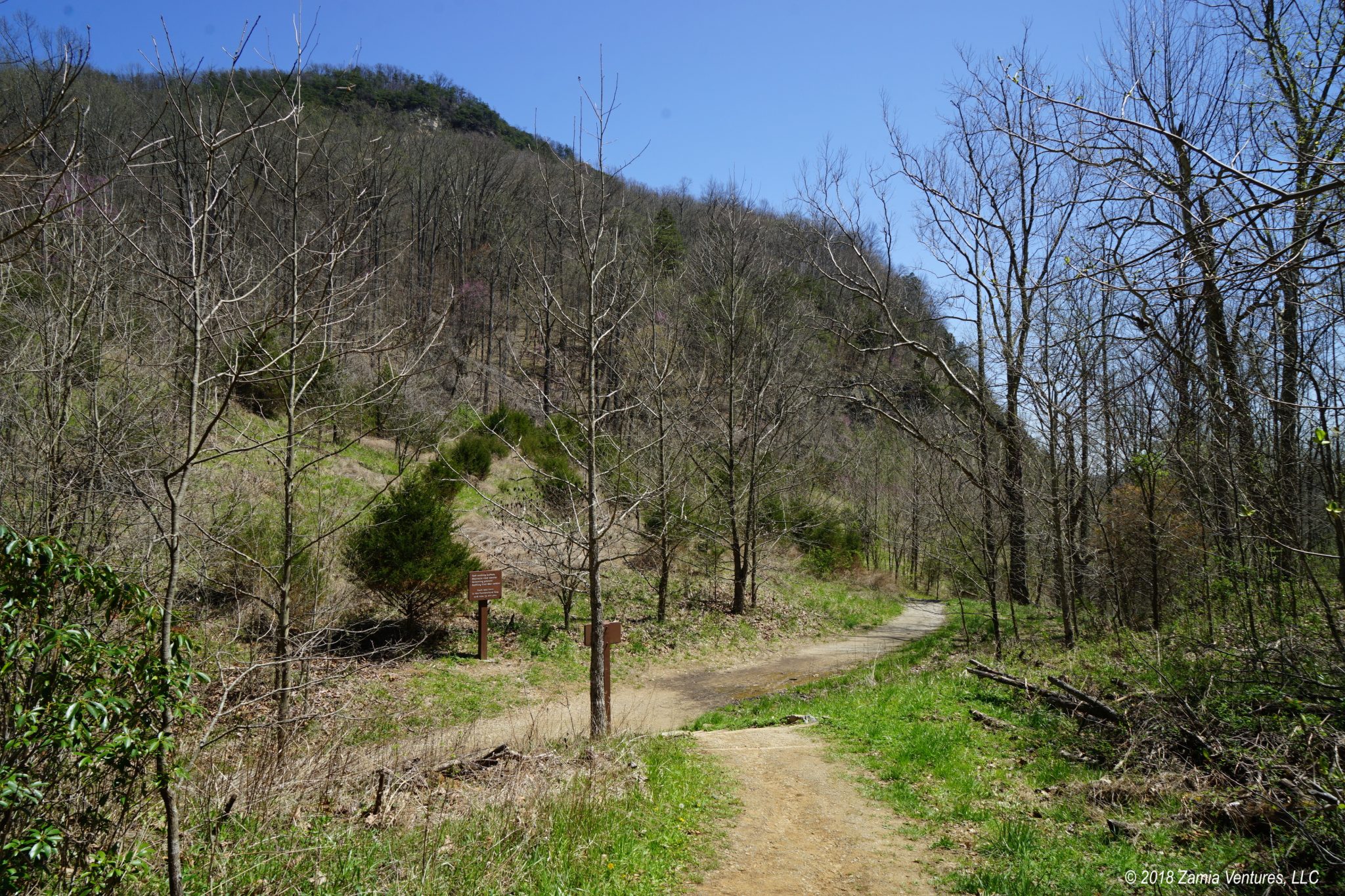 In our quest to see all things Lewis & Clark during 2018, Cumberland Gap National Historical Park was a necessary addition to our destination list because it was one of the few pathways to the west that existed when the Corps of Discovery set out. Of course “the west” was anything beyond the Appalachian Mountains, since the original 13 colonies exclusively occupied the Atlantic seaboard. Not only did the Appalachian mountains forms a natural boundary to the west of the colonies, but the British Proclamation of 1763 forbade settlement west of the mountains in an effort to establish an Indian Reserve which would keep colonists and Native Americans from getting into conflicts that would be annoying and difficult for the mother country to manage. Of course, this effort failed since we know that American history involves a relentless march westward to the Pacific and the rule-breaking colonists were no exception.

The Cumberland Gap was a critical element of the first push of westward expansion, since it provides the easiest (read: lowest elevation) passageway across the Appalachians for hundreds of miles in each direction. The museum and video at the park visitor center did a good job of explaining the long history of this natural pathway, from its origins as an animal trail across the mountains, to its function as the Warrior’s Path for Cherokee and Shawnee raiders, to its role as a pathway for early Kentucky settlers, and finally its significance in the Civil War. Not surprisingly, the flow of animals and people across this narrow pathway led to genetic mixing, trade, and at times conflict on both sides of the mountains at various points in time. Daniel Boone, who blazed the Wilderness Road to and through the Gap used by so many Kentucky pioneers, is prominently featured in the interpretation and in local monuments and names. 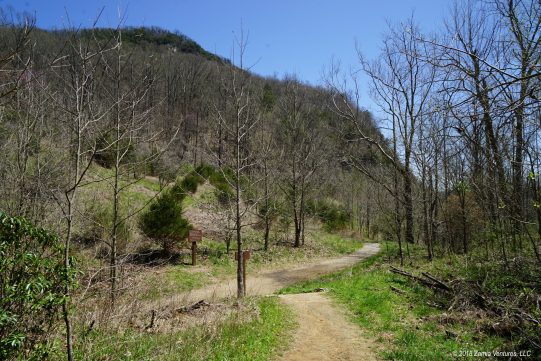 View of the Gap trail 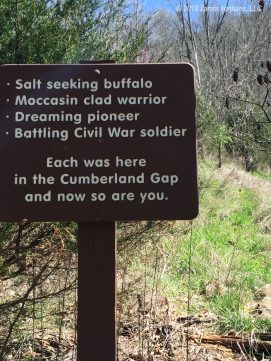 “In case you are looking for it, the Gap is here.”

We enjoyed walking to and through the Gap, especially since the National Park Service has worked for decades to restore the area to something like the condition encountered by early pioneers. The construction of the Cumberland Gap Tunnel in the 1990s allowed the removal of the modern paved Wilderness Road through the gap itself, so today travelers tread a packed earth trail to walk in the footsteps of thousands of years worth of predecessors.

In more survey-related nerdery, we also hiked from the Cumberland Gap to the Tri-State Peak, the nearby point where the borders of Virginia, Tennessee and Kentucky all meet. The site also includes a marker for the location of the Royal Colonial Boundary of 1665, highlighting that this area was once the extreme western end of the colonies. 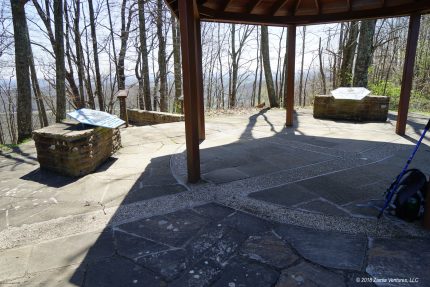 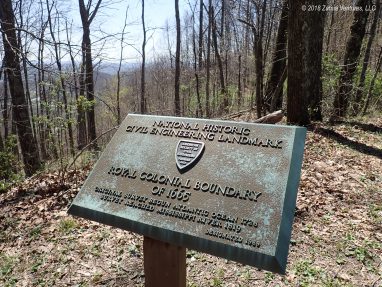 We knew that we wanted to tackle one of the longer hikes within this extensive park, and we were happy to get input from one of the rangers at the visitor center. “Kathy” (names have been changed to protect the not-so-innocent) told us about an excellent day hike at the eastern end of the park, with highlights including breathtaking views over southwestern Virginia and eastern Tennessee, and the Sand Cave, a natural overhang partially shrouded by a waterfall which contains an acre of fine, multicolored sands. The route length of just under 9 miles was perfectly in our wheelhouse, and Kathy’s descriptions made this place seem like a magical destination. So that’s how we ended up on the Ewing Trail up to White Rocks and Sand Cave on a lovely afternoon.

What we didn’t appreciate is that the first 3.5 miles of trail basically go straight up a sheer face of the Appalachians. The elevation gain from the trailhead to the highest point of the trail is almost 2,400 feet. For comparison, the popular Bright Angel Trail from the south rim of the Grand Canyon to the Colorado River has an elevation gain of about 5,000 feet. We are from Florida, where speed bumps count as meaningful elevation gain. Trust me when I tell you that we are in no shape to do a “half Canyon” hike, even though we’ve put hundreds of miles on our hiking shoes since hitting the road.

Propelled by the prospect of seeing amazing things, and a good measure of bull-headedness, we powered our way up the steep switchbacks. Despite hours of climbing, the crest of the ridge didn’t seem to get much closer, but the trail got increasingly steeper and more exhausting. Finally, we reached the White Rocks overlook! Where the “overlook” involves wriggling behind a shrub onto a small rocky outcropping to catch a partial view across the valley below. This is not a panoramic view, and not even a particularly impressive one. I mean, it’s nice, but not really much nicer than what we could see from the peaks right around the Cumberland Gap.

Given that getting up the mountain took approximately the same amount of energy as walking up Mount Doom carrying the One Ring, the payoff of the view was surprisingly lame. Confused by the anticlimax of the White Rocks overlook, we started wondering about the basis for Kathy’s recommendations. We quickly concluded that either she had never actually hiked the trail, or she had an ulterior motive. As soon as we said it, the right answer was obvious: she was trying to kill us. The friendly interest in our hiking plans, the smiling recommendations for locations to visit in the park, and the cheerful wave as we left the visitor center were all an act. The act of a psychopath sending hapless hikers to their demise.

Fortunately we realized our mortal peril as we were approaching the side spur to the Sand Cave. This fun little side trail would have taken us down several hundred feet of elevation on the opposite side of the ridge, which would then require us to reclimb all those steps to get back across the ridge and down to the trailhead. Oh, and the payoff here is the opportunity to walk around in an acre of soft sand. We ended up skipping the side trail to the Sand Cave, thanks to a combination of factors:

The interpretive signage for the White Rocks pointed out that the 250,000+ hopeful pioneers who walked into Kentucky through the Cumberland Gap valued the White Rocks as an important milestone. It meant they were only a day’s walk away from the Gap, the gateway to their new lives in the bountiful land of the Cumberland Plateau. These pioneers made no effort to climb the White Rocks, and instead used them exclusively as a guidepost along the way to the much more manageable Gap. They may have been largely illiterate, but those pioneers weren’t dumb.

Up next: we visit locations with (we hope) fewer death-defying activities.

10 thoughts on “Walking Ancient Pathways at Cumberland Gap NHP, and Foiling the Plans of a Homicidal Park Ranger”