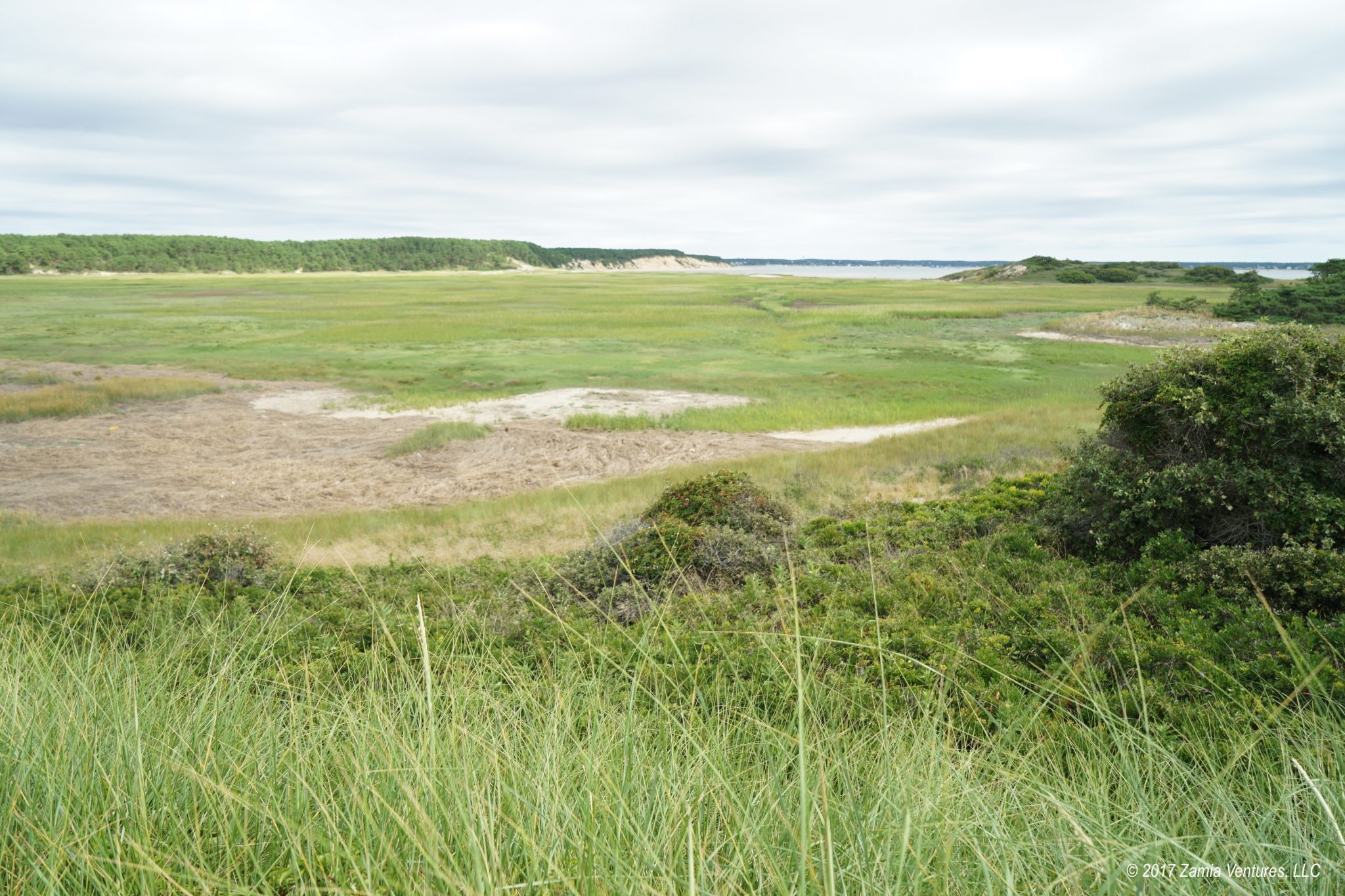 Although the Atlantic Ocean is the star of the show at Cape Cod National Seashore, the national park unit encompasses quite a bit of waterfront on the bay (west) side of the Cape as well as a large amount of upland area. While reading about the park before our visit, I was happy to see that one of the longest and most varied hikes in the park was located right in the area where we stayed. The Great Island Trail was near the top of my to-do list for this visit, and we tackled it on the Friday of our week in Cape Cod.

The trail traverses the peninsula on Cape Cod Bay just to the southwest of Wellfleet, which creates the calm and protected environment of Wellfleet Harbor. The peninsula was not always a peninsula, however. When Europeans first arrived it was a large wooded area but not connected to the mainland — hence the name “Great Island.” The Cape Cod sands are always shifting, and just a few hundred years of tidal action has filled in the area between the Great Island and the mainland with a solid spit of sand known as The Gut.

The trail is an out-and-back loop starting from a parking area in an outlying part of Wellfleet. One half of the loop travels in a straight shot down the bayfront beach on the west side of the peninsula. The other half of the loop meanders through the pine uplands of Great Island and its smaller companion to the south, Great Beach Hill, while skirting around marsh areas. There are a few different crossover points where one could choose to shorten the loop. The full loop, including a side trip to visit an archaeological site on the eastern side of the Great Island, is 8.8 miles.

For some reason this sounded like it would be a lot of fun.

We decided to take the route down the beach as our first leg, since it was low tide and we could enjoy the wide vistas of Cape Cod Bay. I was also under the impression that most of the soft sand would be on the beach, so we’d be getting the hardest part of the trail out of the way first.

The bay side beaches are filled with rocks just like the ocean beaches. They were deposited by retreating glaciers that formed the landmass of Cape Cod. What makes the bay side unique is the long, sloping contour of the intertidal zone. The water retreats very far at low tide, leaving behind a large, flat, wet area that’s a haven for sea birds. The tall bay side dunes are also as unstable as their ocean side counterparts, with areas shearing off to reveal ragged sand formations.

We made it to the southernmost point of land, but decided not to venture out onto the sandbar-like area of Jeremy Point which submerges at high tide. Instead, we headed north and inland to travel across the marshes and forested islands. 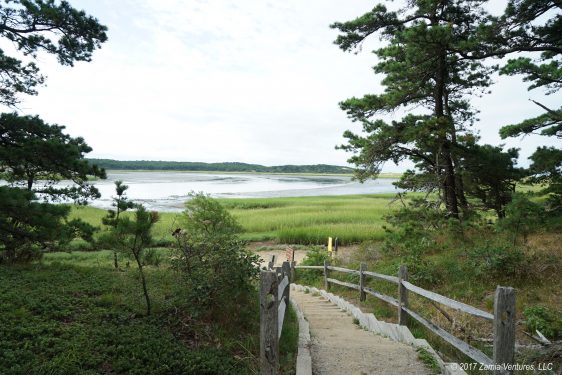 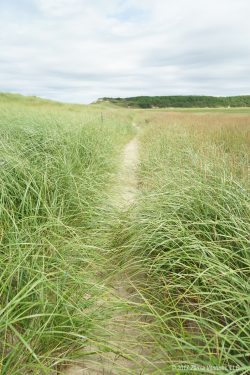 This is the interior trail. Sort of hard to locate if you get off trail.

We enjoyed seeing Wellfleet Bay from the opposite direction from the Wellfleet Bay Wildlife Sanctuary, and spotted some of the same salt-tolerant marsh grasses. However, another thing we noticed was the absence of signage or markers for the trail. This didn’t seem like an issue on the beach, where the directions are pretty simple (walk down the beach). Locating the trail back took a bit more guesswork. At one point, what we thought was the trail led us through an increasingly swampy wetland to a three-foot deep channel of water. I had not been enjoying the ankle-deep muck squishing through my sneakers and definitely did not feel up to fording a channel, so we turned back and tried to locate a different route, now with mucky shoes.

We eventually found our way back to higher ground and found a more clear trail (though still with no signage). I should mention that I picked up a paper trail guide at the entrance to the trail, and while it had lots of interesting text about the human and geological history of the Great Island, its tiny hand-drawn map of the trail left a lot to be desired. Despite this, we were having fun and were united in our disdain for the NPS’s signposting abilities, at least for hikers heading north from Jeremy Point.

Once we made it into highlands the trail was much more visible. However, it was still mostly soft sand. Except now it was going uphill. Did I mention how much fun I knew this would be?

The pine forests on the islands offered a welcome change of pace from the wide open beaches and marshes. The shade was really pleasant, and the gnarly pines had a rugged beauty about them. Even the increased elevation turned out to be nice, since we had great views over the marshes when we emerged from the wooded areas. 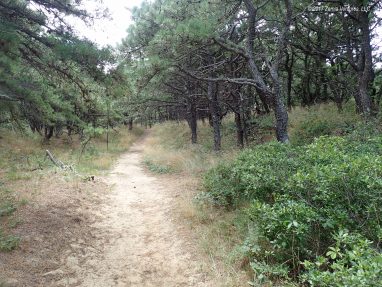 This is the trail, we think. 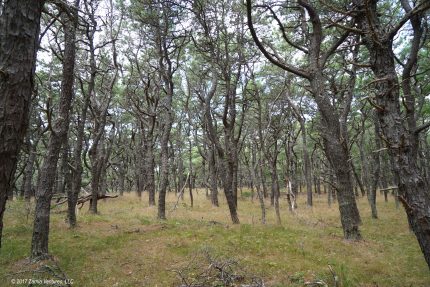 About three quarters of the way through the hike — several hours in — we reached the turn for the side loop to the archaeological site where a tavern stood in the early 18th century. Ken and I were once again united in our reaction: “Heck no!” So we headed back up the Gut and returned to the trail head.

We estimated that our three-hour hiking adventure had covered about 7.5-8 miles, including several back-tracks in an effort to locate the proper trail. It seemed like about 6.5 of those miles involved walking on soft, shifting sand, and the rest were uphill. But we still had fun!

We were really proud of ourselves for completing a strenuous hike and dealing with the challenges of navigating with no assistance from the fine people who established the trail. The varied landscapes were interesting, and while we saw a few other hikers in general the trails were blissfully empty. This adventure was a success, even if we did need to hose out our shoes very badly when we returned home.  Here are some of our photos from the day: 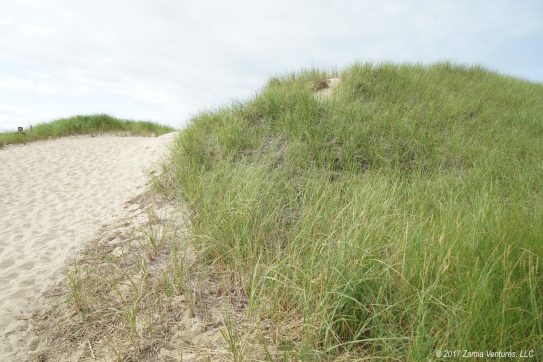 Crossing the dunes to the bay beach 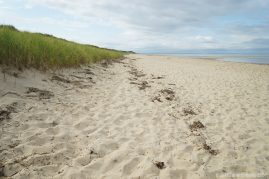 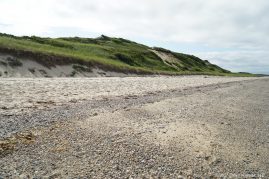 Great Beach Hill as seen from the beach 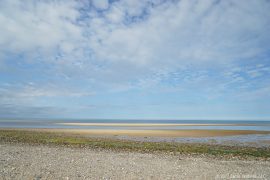 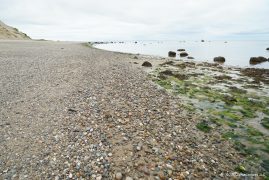 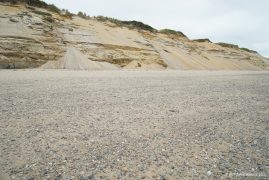 More dunes with evidence of collapse 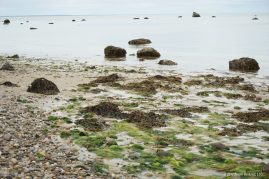 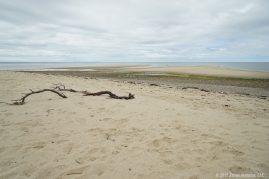 View of the bay from Jeremy Point Overlook 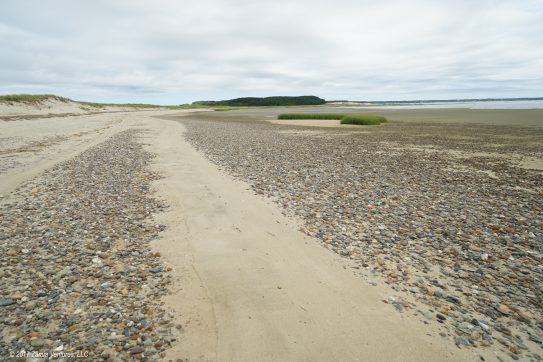 View from the point looking north up Wellfleet Bay 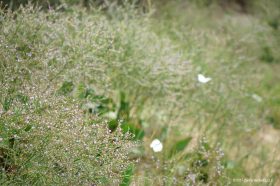 These tiny purple flowers were popular with butterflies 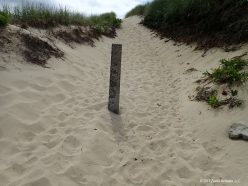 Is this supposed to be a sign? A trail marker? 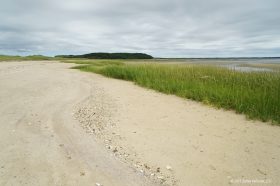 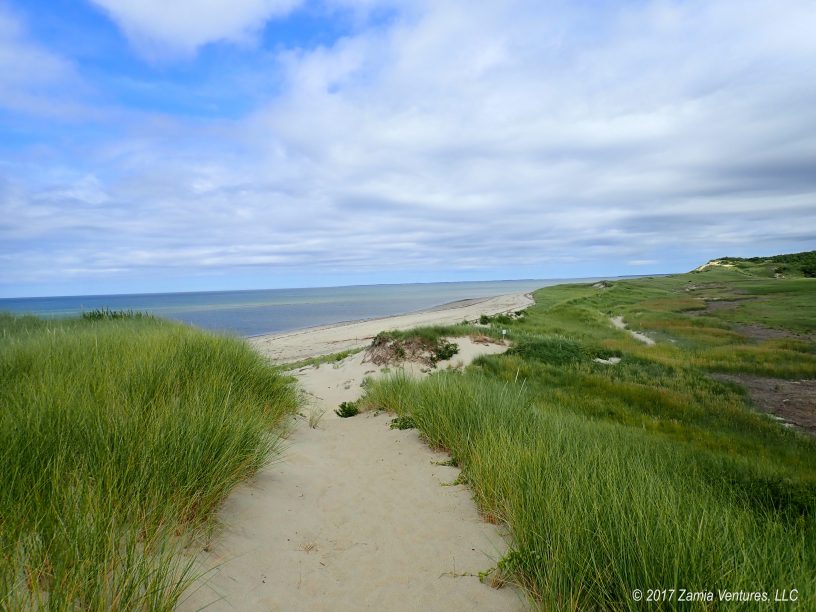 We made it back! Hooray!