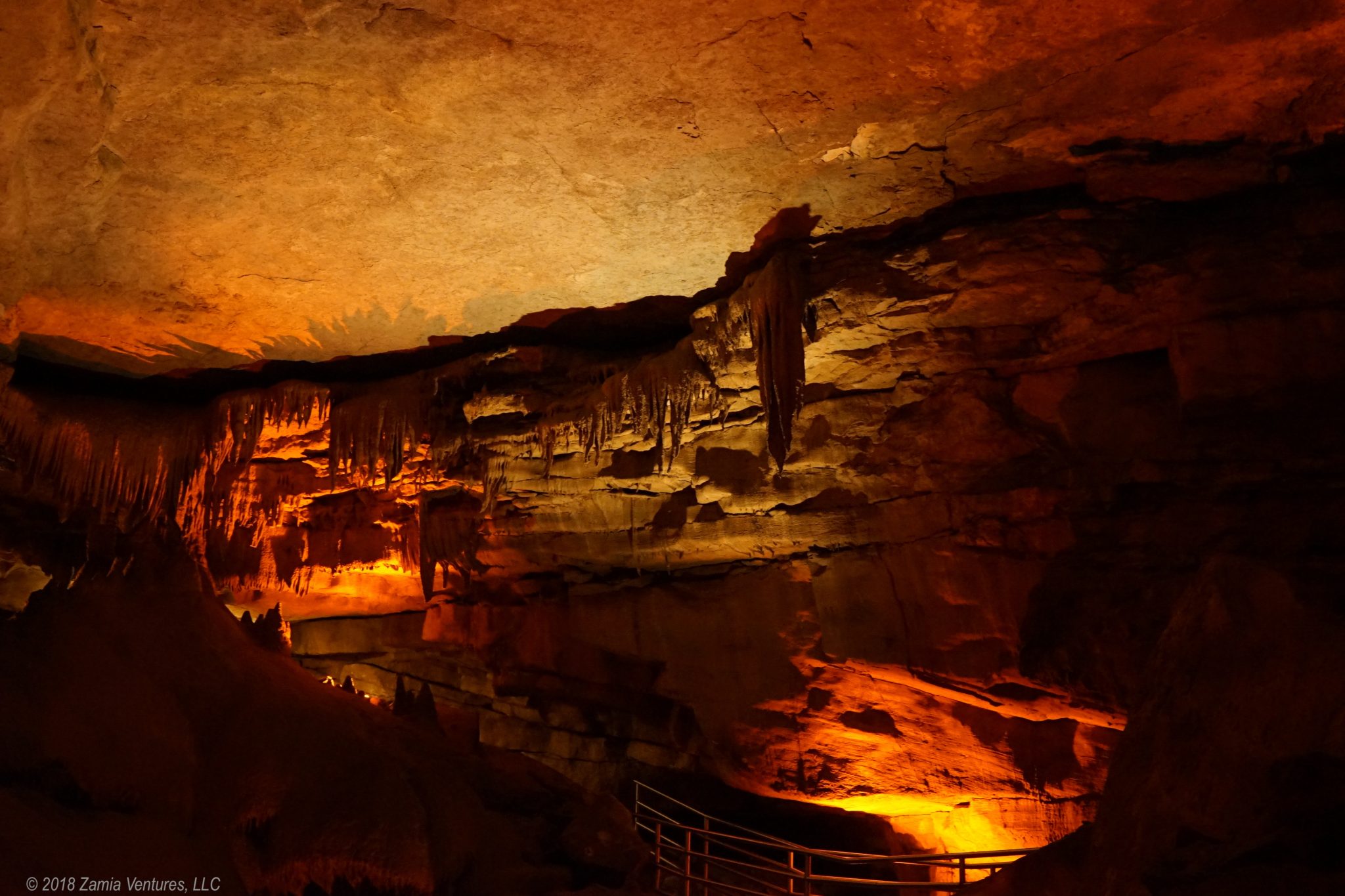 Although we had never visited a true underground cave system before, we knew that our travels through Kentucky had to include a stop at Mammoth Cave National Park. Not only is it one of the oldest national parks, but it has also earned worldwide fame for being the largest cave system in the world by far, with over 400 miles of interconnected passages discovered to date.

The caves developed thanks to a specific combination of geological conditions: many layers of soft limestone rock covered by relatively waterproof sandstone, which was uplifted above the prevalent water table. The result was that the relatively limited amount of water that found its way under the sandstone eroded through the limestone as it flowed underground to reach the water table, while the sandstone “roof” protected the remainder of the limestone from surface erosion by wind and rain. 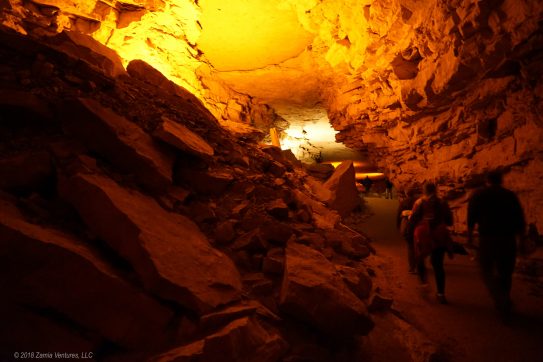 A flat but formerly dangerous locale 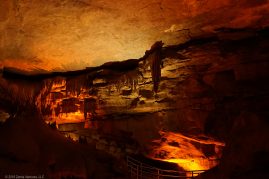 The walkway at the bottom right provides some sense of scale 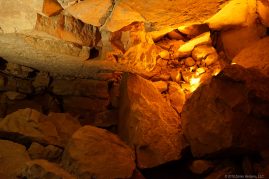 Rockfall into an eroded passageway 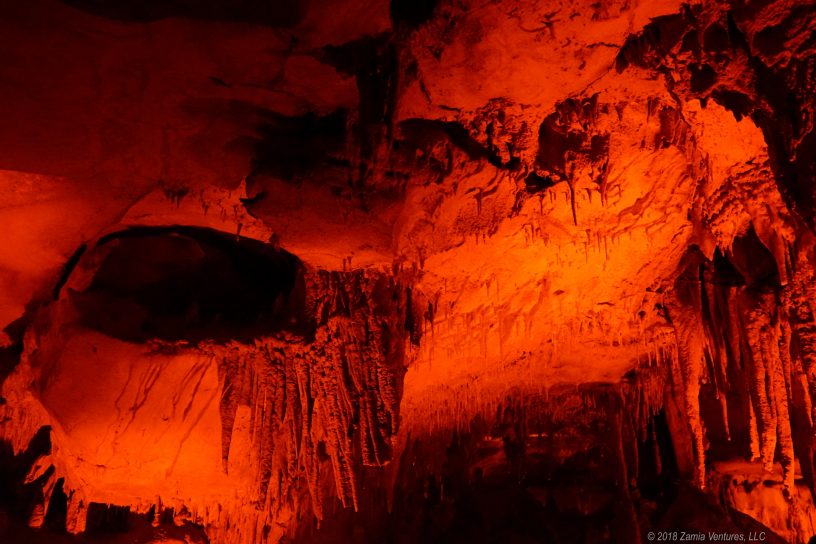 Stalactites are sort of creepy

The best way to see the caves is on one of the ranger-led tours, and this park has a massive tour infrastructure to support very high demand. It’s a good thing we bought our tickets online in advance, since our stay happened to be over a weekend and nearly every tour was sold out when we arrived at the bustling visitor center on Saturday morning. We selected the two-hour Domes and Dripstones tour out of the 10 different itinerary options, which all feature different areas of the caves and different tour lengths, and this turned out to be a great choice.

Our tour group had over 100 people in it, but the NPS very efficiently bussed the whole group down to the “New Entrance” to begin the tour, led the whole pack through the tour, and returned us to the visitor center by bus within the allotted 2 hours. We observed that all the tours started with pretty stark warnings about the dangers one might face on a cave tour and the absence of ready access to medical assistance, which made it surprising that there were so many small-ish children on our tour. Our particular tour included over 500 stairs, mostly down a very deep sinkhole shaft, and plenty of tight passageways. As the ranger commented, this particular tour offers the unusual combination of being able to trigger panic attacks both for claustrophobia and acrophobia. 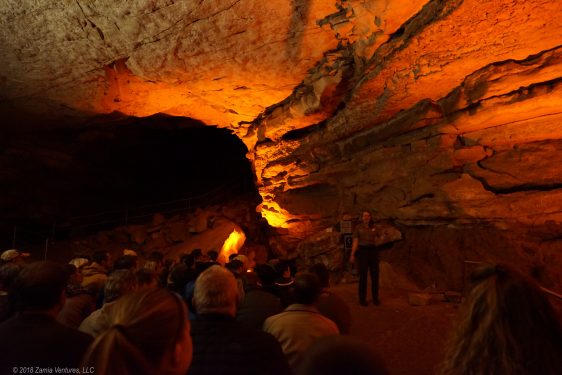 Our tour group; ranger at the bottom right 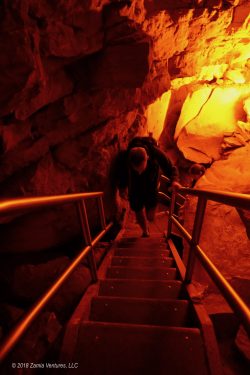 Ken climbing up one of the many sets of stairs

What I loved about the tour was the opportunity to see several different types of formations and caves in different stages of life. The entry through the sinkhole brought us down a deep vertical shaft which is still receiving water (read: we were dripped on the entire way down, and those hundreds of steps were slippery) and therefore continuing to erode and create new passageways. We passed through a number of relatively level large caverns and passageways, which are dry and therefore dormant. Finally, we ended up at the famous Frozen Niagara formation which is a massive group of stalactites resembling a waterfall. Stalactites and stalagmites (“Stalactites hold tight to the ceiling; stalagmites might reach the ceiling someday”) grow as slow-dripping water re-deposits the dissolved limestone material and rebuilds rocky formations. The formations will keep growing until the entire cave closes in, so these caves are in their extremely drawn-out death throes.

The wet areas of the caves are all lit with red lights, in an effort not to induce algae growth, giving the otherworldly formations a distinctive ambience that can best be described as “apocalyptic hellscape.” The caves have been a tourist attraction for 200 years, and I can only imagine what early visitors thought about these strange underground caverns when they were lit only by flickering candles and torches. 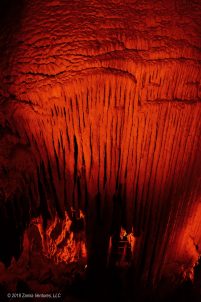 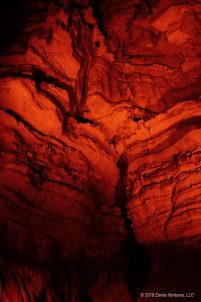 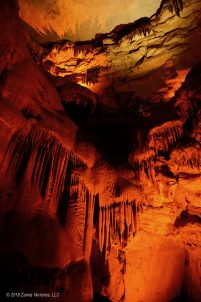 Even though the tours are broadly popular, and we obviously lived to tell the tale of our experience, I was pretty surprised by how treacherous some of the areas were. In addition to slippery stairs, we dealt with several steeply sloped and rutted walkways that lacked handrails. The whole tour is extremely dimly lit and there are plenty of rocks jutting into the walkway areas just waiting to clock an unsuspecting tall person in the head. Our particular tour had no minimum age requirement, and frankly some people really needed to consider whether the tour was appropriate for their small children. I think I will get hearty agreement from the people in the back third of our group who got to experience genuine cave darkness when an unruly kid decided to punch some buttons along the walkway and managed to turn off the lights behind him!

The rangers and the very high quality visitor center displays did an excellent job of explaining how the caves were formed over millions of years solely by the action of water in the particular geology of the area. Another highlight of our tour was the introduction by Ranger Jerry Bransford on our bus ride to the entrance. He is the great-great-grandson of Materson Bransford, a slave who was one of the first regular guides in the caves in the 1830s. Ranger Jerry also pointed out that his ancestor arrived at this job after being leased out for the purpose by his owner/father, Thomas Bransford, a local businessman who was one of the early investors in cave-related tourism. After hitting us with some slavery-related reality, as a local resident Ranger Jerry also communicated the perspective of the hundreds of families that lived on the land before it was taken via eminent domain to become a federal park. The weighty content was nicely balanced with a good dose of cave-related humor because, as he noted, “Cave jokes are always rock-solid.”

Part of the Drapery formation 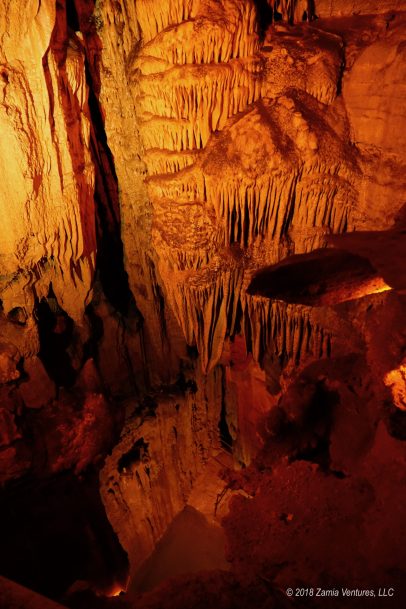 Up close to the Frozen Niagara

Upon exiting the caves all visitors are required to walk across squishy mats containing anti-fungal treatments, in an effort to stop the spread of white nose syndrome – which has killed off many of the bats here in Mammoth Cave – to other caves via visitors’ shoes. I have some doubt as to whether this treatment is 100% effective, but I appreciated the way the NPS integrated this element of environmental sensitivity into the tour routine to raise awareness of the issue.

After several hours underground it was a relief to walk around on the mountainous green surface and see some of the cave-creating rivers and streams that emerge from the sides of the hills to join the Green River. 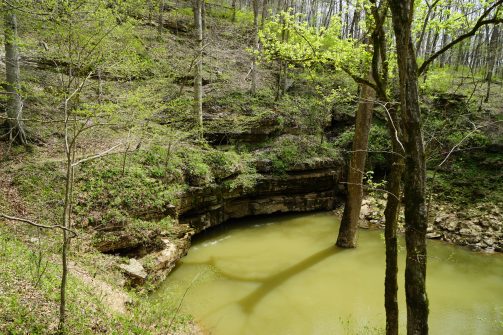 River Styx emerging from underground to flow to the Green River 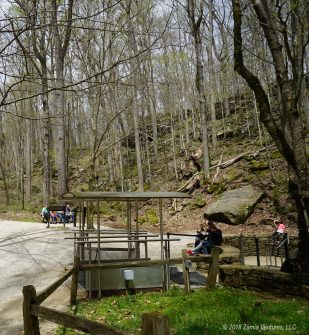 The tiny portion of the cave that we experienced was pretty fascinating and I can certainly appreciate why the complex is considered a natural wonder. One interesting point emphasized by the interpretation at the park is that natural features of the American landscape known in the early 19th century, like Mammoth Cave and Niagara Falls, played an important part in forming the nascent American identity. This brand new country was in search of a story, and unlike the countries of the Old World it did not have ancient ruins like the Coliseum, imposing medieval structures like cathedrals, or the rich artistic heritage of Europe to provide a backstory. Instead, and perhaps in a conscious effort to forge an identity very different from Europe, America began to form a self-image around these natural wonders that far surpassed anything seen in Europe in terms of size and grandeur. I suppose these unexpected and strange features work well as mascots for a wild and crazy country. We can’t wait to see even more as we head further west.

Mandatory Visits in the Black Hills

9 thoughts on “Breaking Into Spelunking at Mammoth Cave”