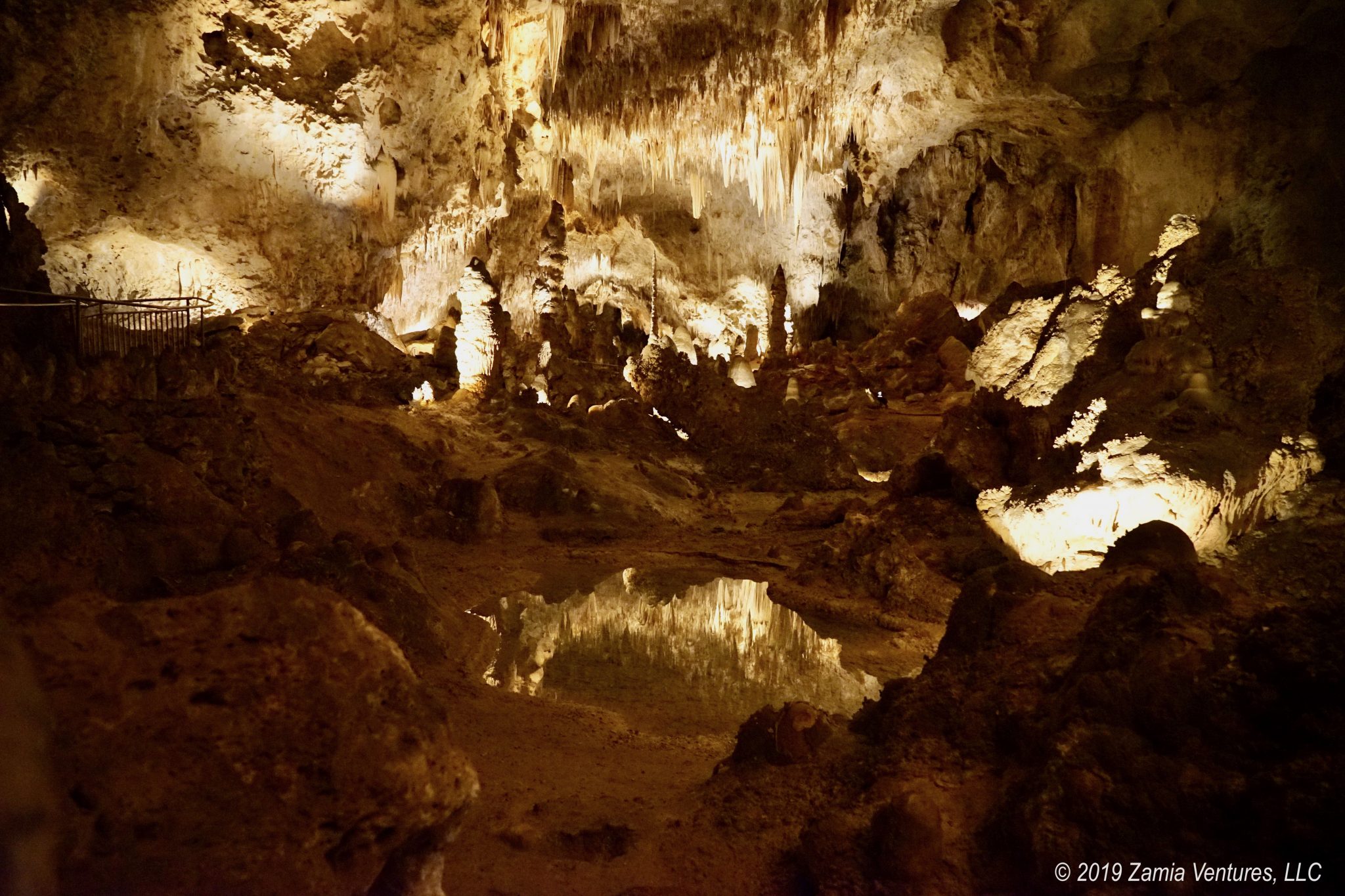 East of El Paso, in a remote corner of the Chihuahuan Desert, two national parks straddle the border between Texas and New Mexico. Since we were in the area, we made sure to plan a visit to the almost-adjacent Guadalupe Mountains National Park and Carlsbad Caverns National Park.

The only campground within the two parks is the Pine Springs Campground at Guadalupe Mountains, and since we always prefer to stay in the park that’s where we landed. It is, however, one of the least appealing national park campgrounds we have seen. The “campground” is just a paved parking lot with closely packed spaces and no hookups. On the plus side, there are quite a few hiking trails that start directly behind the campground/parking lot. Also, by pulling in on a Wednesday we were able to snag an end spot, giving us relief from neighbors on one side. 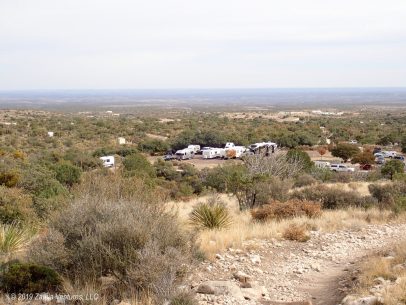 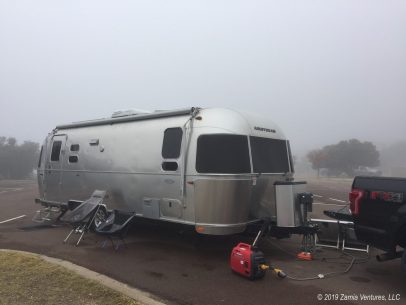 Generator making power in the fog

The biggest issue we encountered during our stay was the weather. A front brought rain, wind, and cold temperatures on the day of our arrival, and we spent the next several days literally camped inside a cloud. The Guadalupe Mountains include the highest point in the state of Texas, and the high mountains managed to trap the moisture from the weather system and keep our campsite foggy for days. With no possibility of solar power generation, we had to pull our trusty Honda generator from storage in the bed of the truck and run it for about 90 minutes to recharge all our devices and our house batteries halfway through our stay. Happily, the generator started right up despite six months of total neglect.

We had previously visited three different national park cave systems — Mammoth Cave in Kentucky and Jewel Cave and Wind Cave in the Black Hills — and the latter two in particular were interesting but not mind-blowing, so our expectations were fairly modest. Carlsbad Caverns totally wowed us.

There are two ways to enter the cave. The most popular method is by the super-fast elevator that descends 750 feet from the visitor center in around a minute. Being contrarians we of course chose to use the natural entrance, which turned out to be an excellent choice. The caverns were originally discovered after people noticed large numbers of Brazilian freetail bats emerging from the mouth every night during the summer; the cave serves as the birthing ground and nursery for a massive amount of these migratory mammals. The natural entrance is surrounded by an amphitheater where visitors can watch the bats emerge in the evenings, and the natural entrance trail is a path down from the amphitheater into the mouth of the cave. 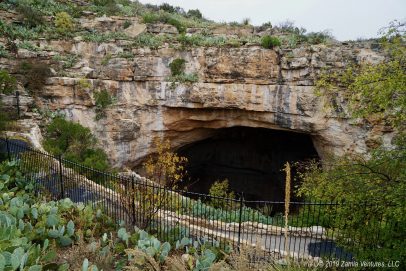 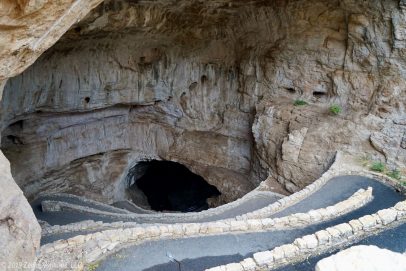 Looking into the natural entrance

The park provides many warnings about the natural entrance trail being very strenuous, but it’s a smooth paved pathway that offers handrails on both sides once inside the cave. While the downward incline was definitely noticeable, any person of moderate fitness could easily handle the trek and we thought the experience (and absence of other visitors) was well worth the extra walking. Walking down from the natural entrance allowed our eyes to adjust slowly to the encroaching darkness and start to take in the wondrous calcite shapes that have grown on the ceiling, walls, and floor. The main quality of Carlsbad Caverns is the sheer size of the caves. All the way from the natural entrance down to the main cavern we were looking across and down large vistas. This was a major contrast to the other caves we have visited, which featured plenty of low ceilings and squeezing through tight tunnels. The caverns here are grand halls. I remarked to Ken that it was exactly how I imagined the underground dwarf kingdom of Moria in Lord of the Rings would look. Honestly, there was no need to spend money on CGI for the movie — they really could have just filmed here. Of course, getting the cast, crew, and equipment out to this remote part of the country would probably be more expensive than doing the computer generated imagery. Note to film and TV producers: I am available to offer inspired yet impractical advice on filming locations, for a reasonable fee. 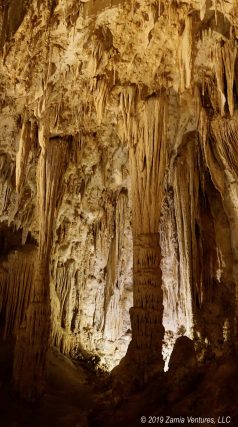 Stalactites have merged with stalagmites below to form elegant columns 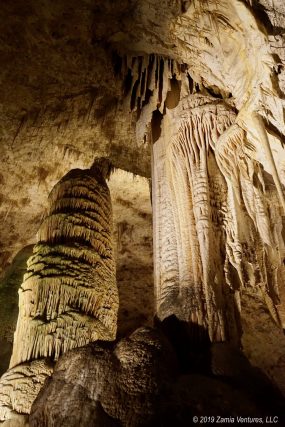 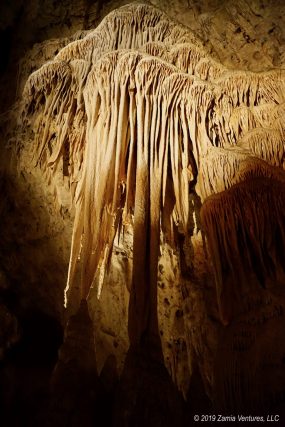 At the bottom of the 1.25 mile natural entrance trail we reached the Big Room. This main cavern is aptly named, since it is the largest known natural limestone cavern in the Western Hemisphere. The Big Room is 8.2 acres, larger than six football fields, and the route around the perimeter of the room is 1.25 miles long. In places the ceiling is over 250 feet above the floor. Photos really do not capture just how immense the space is. Perhaps more important, it is very densely decorated. There are stalactites and straws hanging from every ceiling, while the floors are filled with stalagmites interspersed with pools of water surrounded by limestone “lily pads.” Carlsbad is a living cave — water flows through the cave so formations are continuing to build, and unusual critters like blind shrimp live in the pools. The pools made for interesting reflections of the surrounding environment, like the pool of water in the foreground of the photo at the top of the post.

What makes Carlsbad remarkable, other than its immense size, is the wide variety of different types of decoration. We saw typical stalactites hanging from the ceiling, along with ultra-thin hollow straws, but many of these normal formations were covered in additional popcorn and crystalline decorations to add more dimension and interest. The stalagmites growing from the floors often had anemone-like drip formations along the sides, and many had reached high enough to join with stalactites from the ceiling to create full columns. There were also undulating draperies and flow formations everywhere we looked. Although we had seen many of these types of decoration individually before, the sheer volume and concentration of remarkable shapes is overwhelming here. 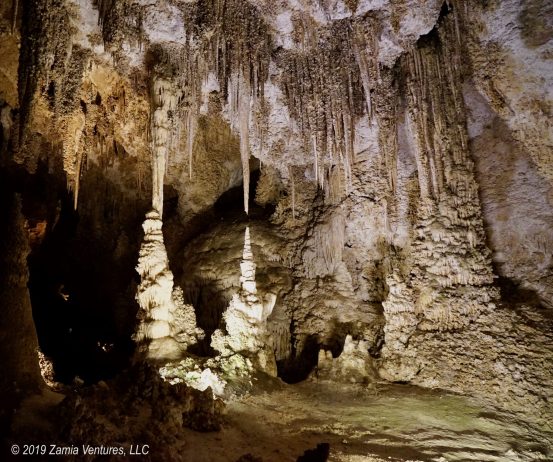 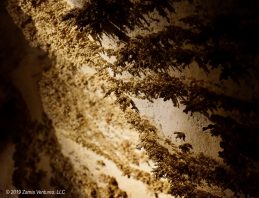 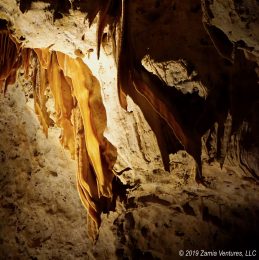 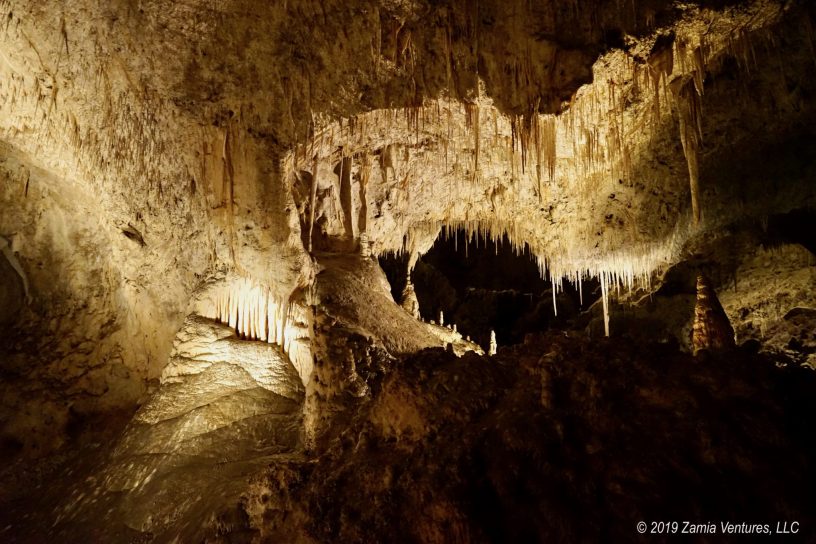 Perhaps our favorite thing about Carlsbad Caverns is that visitors can meander the trails at their own pace. We were on ranger-guided tours at the other three caves we visited, and while we appreciated learning from the entertaining and informative rangers we didn’t enjoy being forced to march single file in a large group at a pace dictated by others. Carlsbad’s enormous size meant that people were nicely spread out on the walkways, and the walkways are wide enough that we could easily pass other visitors or let them walk by us while we were examining formations in detail. We spent about two hours exploring the caves, and it felt like we were moving along pretty quickly and constantly being bombarded with new things to gape at around every corner.

The mountains are part of the same ancient reef formation that was hollowed out to become Carlsbad Caverns, but here the reef was merely uplifted to create en enormous limestone sentinel. The high mountains trap moisture from passing clouds, as we can personally attest, and they are an oasis of life in the middle of the harsh Chihuahuan Desert. From the highway the mountains look like more of the same scrubby land, but hiking into the canyons and up to the higher elevations reveals rich ecosystems of many different plants and animals.

We did two different hikes during our time in the park, tackling the Devil’s Hall Trail on the first day the fog was predicted to clear. The trail is an out-and-back accessible from the campground, but the second half of the trail is unmaintained trail up a wash with plenty of boulder scrambling and difficult footing on rocks. My ankles tell me the trail felt much longer than our recorded length of 4.5 miles. Since we started out in a pea soup fog, at first we didn’t see much other than the plants right along the trail. As the fog burned off, the mountains emerged and we began to see glimpses of the vivid fall colors that would become the standout feature of our hike.

We also encountered some new-to-us animals: a herd of Barbary sheep. When sighted from a distance we initially thought these animals were bighorns, but their horns don’t curl fully around and they have noticeable throat-beards. A couple of park volunteers we encountered on the trail explained they are exotic animals imported to the mountains after the native population of bighorns was hunted out. Nearby ranchers apparently had side businesses guiding hunting trips and needed game animals, so Barbary sheep were released and quickly became established here. I’m a little surprised the NPS hasn’t removed these exotic animals from the park and reintroduced bighorns, but the Barbary sheep probably fill the same ecological niche. Plus their hipster beards are interesting. We watched the herd make its way nimbly up and down the rocky canyon walls on both the outgoing and return legs of our hike. 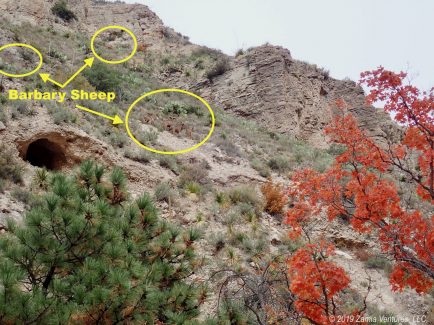 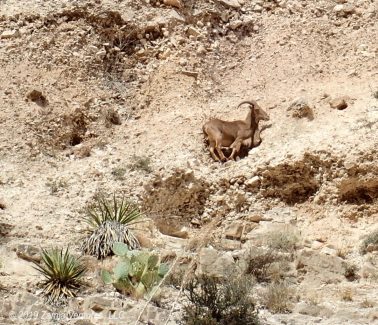 The destination of the trail, the Devil’s Hall, is a narrow channel carved through limestone with clear sedimentation breaks, making for a nightmarish facsimile of brick walls. The geology and the mountain views were nice, but we most appreciated the autumnal abundance. Prickly pear cacti were laden with plump purple fruits, and the deciduous trees of the canyon were just a riot of colors. Seeing the color change was a delightful surprise, and certainly something we did not expect to find in West Texas. The maples in particularly were at the height of their orange and red colors, making for a breathtaking palette of colors in the desert. 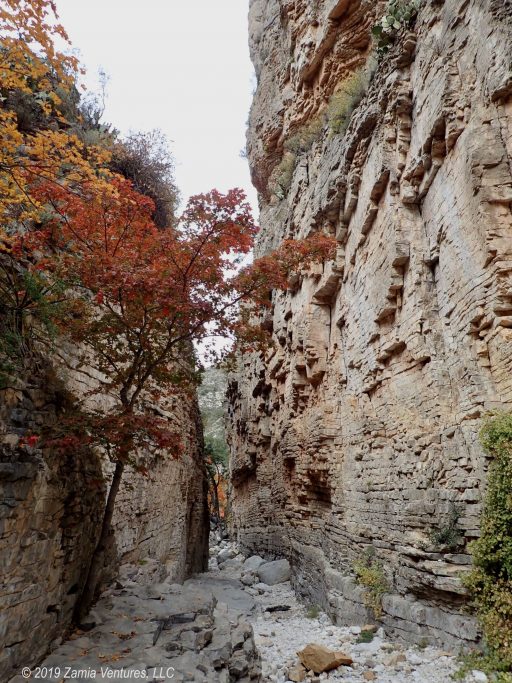 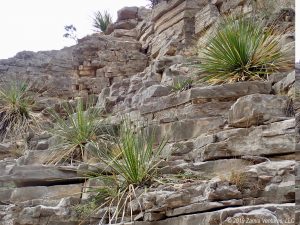 Yuccas on the broken steps 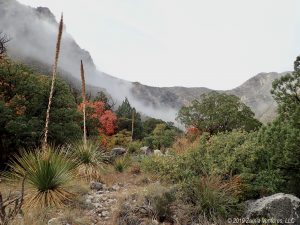 Yuccas in the mist 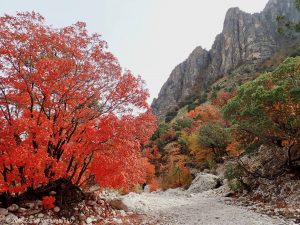 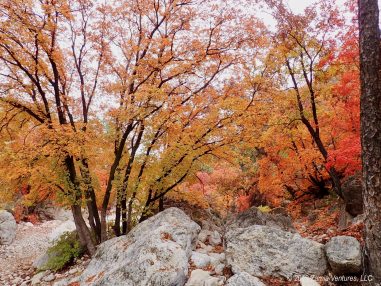 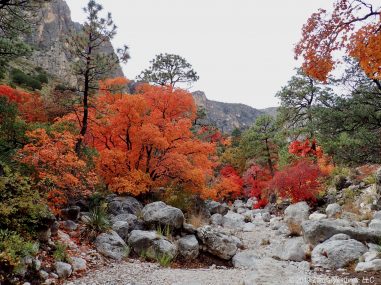 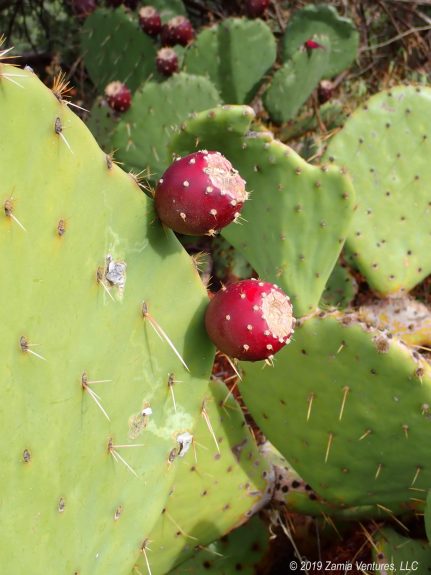 The second trail we tackled from the campground was a loop along the Frijoles and Foothills Trails. We finally saw sunshine (hooray!) and headed out along the apron of the mountains, enjoying long views over the surrounding landscape, before reaching a historic ranch home situated beside a valuable natural spring. The ranch home was open for viewing with a park volunteer on hand to answer questions, and we enjoyed seeing the displays on the cultural history of the park including the history of ranching in the area. The park hiking guide claims that the loop trail is 5.5 miles, but we recorded 6.5 on our hike including our wanderings around the ranch. The arid desert environment, the views of the distinctive limestone face of the mountains, and the Frijoles Ranch all added new dimensions to our park experience. 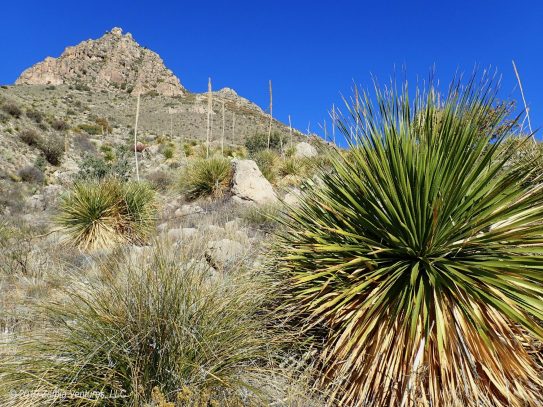 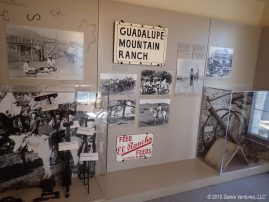 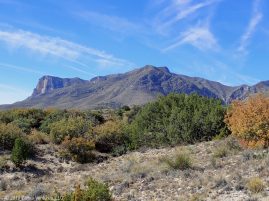 Side view of limestone El Capitan

Although our stay was very short by our standards at only four nights, on our three full days of activities we were able to immerse ourselves in three very different and equally interesting environments. These parks are pretty remote — it’s 100 miles of nothing between Guadalupe and El Paso — but we are quite glad we fit them into our southwest itinerary.

Next: we return to New Mexico for one final stop near Las Cruces, mainly so I can fly east from El Paso.

Breaking Into Spelunking at Mammoth Cave