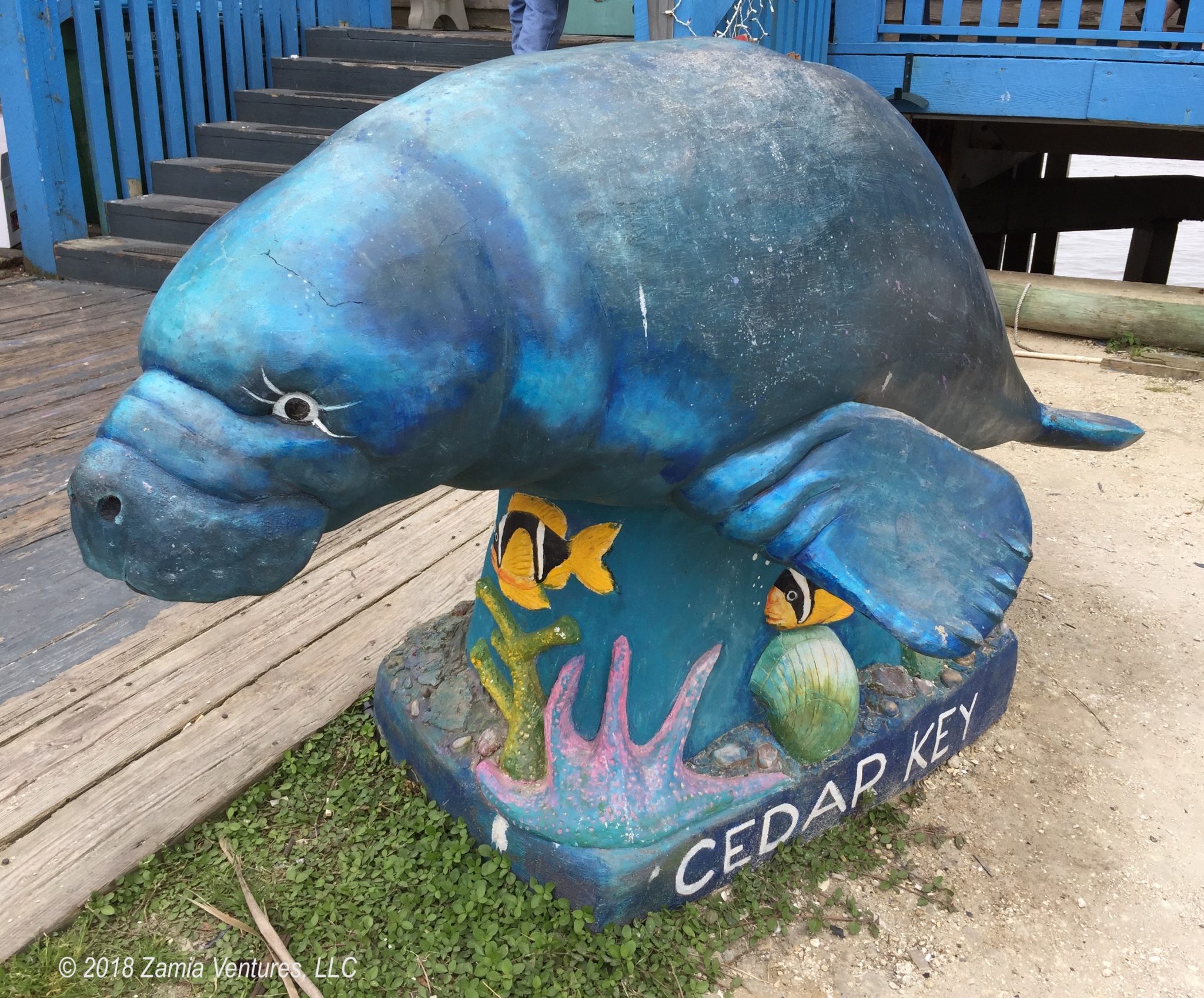 We are taking our time traveling up the Florida peninsula for two reasons: one, Florida is a ridiculously long state, and two, it’s still cold “up north” in any place not surrounded by water.  Since we’re not in a hurry, we can divide up the distance into more manageable driving days and also enjoy the sights along the way.

One main destination during our sojourn through the Big Bend was Cedar Key, a collection of tiny islands that just barely poke up above the flat marshes of the northeastern Gulf of Mexico. This area of Florida brands itself the “Nature Coast” — because literally every part of Florida has a nickname designed to entice tourists — and we sought out the local wildlife by hitting the water by kayak. Facing some choppy water in the Gulf, we initially paddled around in some of the interior waterways. We saw lots of birds, but after several scrapes and crashes we concluded that the prolific oysters of the famous Cedar Key shellfish industry made it too hard to navigate the shallow inland waters. Apologies to all the wading birds we disturbed with our loud and frequent swearing.

We then headed out across open water toward Atsena Otie Key, which is part of the Cedar Keys National Wildlife Refuge. 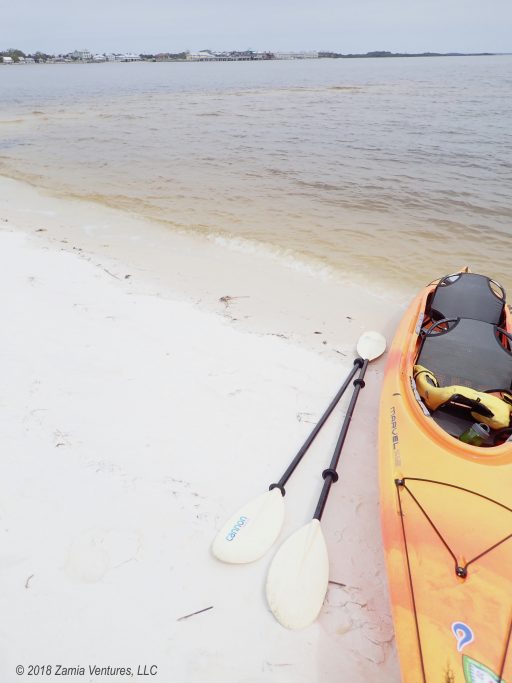 Our watercraft, and the pier from whence we came 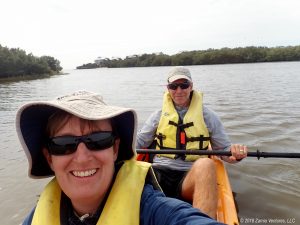 Teamwork in the kayak at Cedar Key, FL 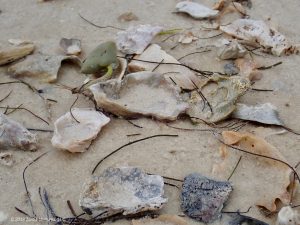 Oysters dominate the shells on the beach 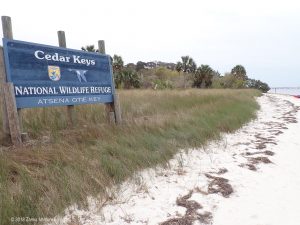 The trail through the middle of this deserted island leads past plenty of evidence of former human occupation, in various stages of decay, and ends at a cemetery that could be the setting for the most Gothic of tales. As the final resting place for several dozen people, with varying ages and family affiliations, the cemetery bears witness to the former existence of a sizeable community on this somewhat remote island. However, the interpretive signage at the cemetery — consisting solely of a plaque listing the names and dates of birth and death of the people interred there — does nothing to explain why the community was formed and then abandoned. Based on the tone of my last post, apparently this blog will contain a high percentage of curmudgeonly comments about the interpretive choices made by the stewards of various historic sites. Public agencies are officially On Notice of forthcoming critiques.

Fortunately, Wikipedia was able to come to the rescue and fill in the blanks. As detailed in the helpful history of Cedar Key, the settlement on Atsena Otie was the first European settlement in the area, and its development in the mid-19th century was propelled by the ready availability of cedar trees for timber. Specifically, the Eastern Red Cedar was prized as the best wood for the manufacture of pencils, and Cedar Key’s abundant cedar forests led to the construction of not one but two different saw mills by pencil producers.

Cedar Key had a pretty good 50-year run as Pencil Town, USA. Amazingly, the tiny hamlet of Cedar Key (2010 population: 702) was once the western terminus of the first railroad to cross the state of Florida and at that time most of the population lived on the outer island of Atsena Otie.

However, this situation obviously changed, and Wikipedia answers the question of why the last graves on Atsena Otie date from 1896:

Around 4 am on September 29, 1896, a 10-foot (3.0 m) storm surge swept over the town, killing more than 100 people. Winds north of town were estimated at 125 miles per hour (201 km/h), which would classify it as a category 3. The hurricane wiped out the juniper trees still standing and destroyed all the mills.

Yup, that will do it. The remaining population retreated to the more inland Way Key, where the current town of Cedar Key is situated, but the community never regained its regional prominence. Today the economic activity of Cedar Key appears to be comprised almost exclusively of aquaculture (clams and oysters) and tourism. The historic buildings and small-town feel of the town are nice, but the charm is diminished by the fact that most of the businesses occupying the historic buildings are selling cheesy T-shirts and other cheap tchotchkes. To me, the town bears an unfortunate resemblance to Provincetown on Cape Cod, but with significantly more golf carts. At least we did our part to support local business by eating a truly impressive array of local shellfish. 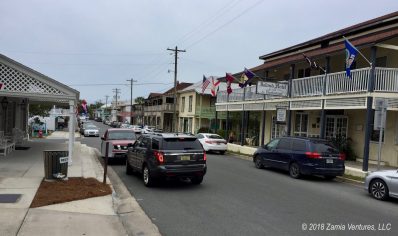 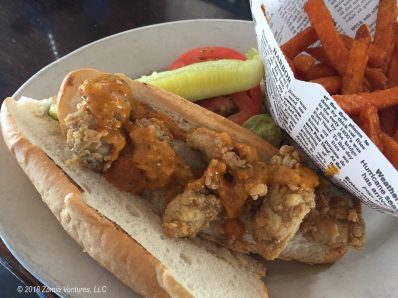 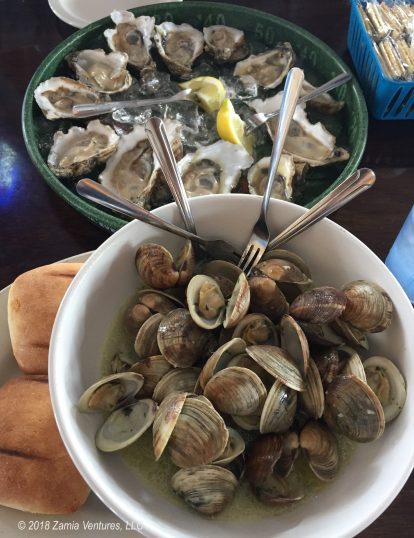 It doesn’t get any more local

Last but not least, we made time during our stay in the Big Bend to take a leisurely stroll along the banks of the Suwanee River.

We were camped in tiny Gilchrist County at a campground along the river, and spent a nice morning enjoying river views from a boardwalk overlooking a pleasantly pristine portion of the river. 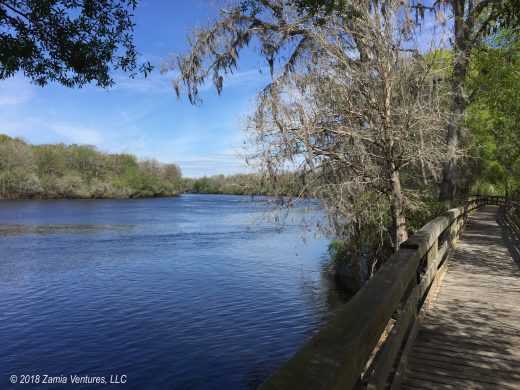 Way down upon the Suwannee River… 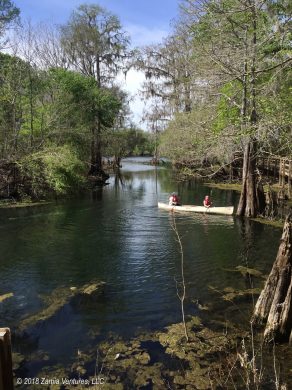 We also accomplished several housekeeping tasks — because life on the road is still, you know, life — in preparation for our next big adventure: a week at the beach! We plan to enjoy one last big ocean experience along the white sand beaches of the Florida Gulf Coast, before we head inland and to the heartland.

3 thoughts on “Moseying Up the Big Bend”