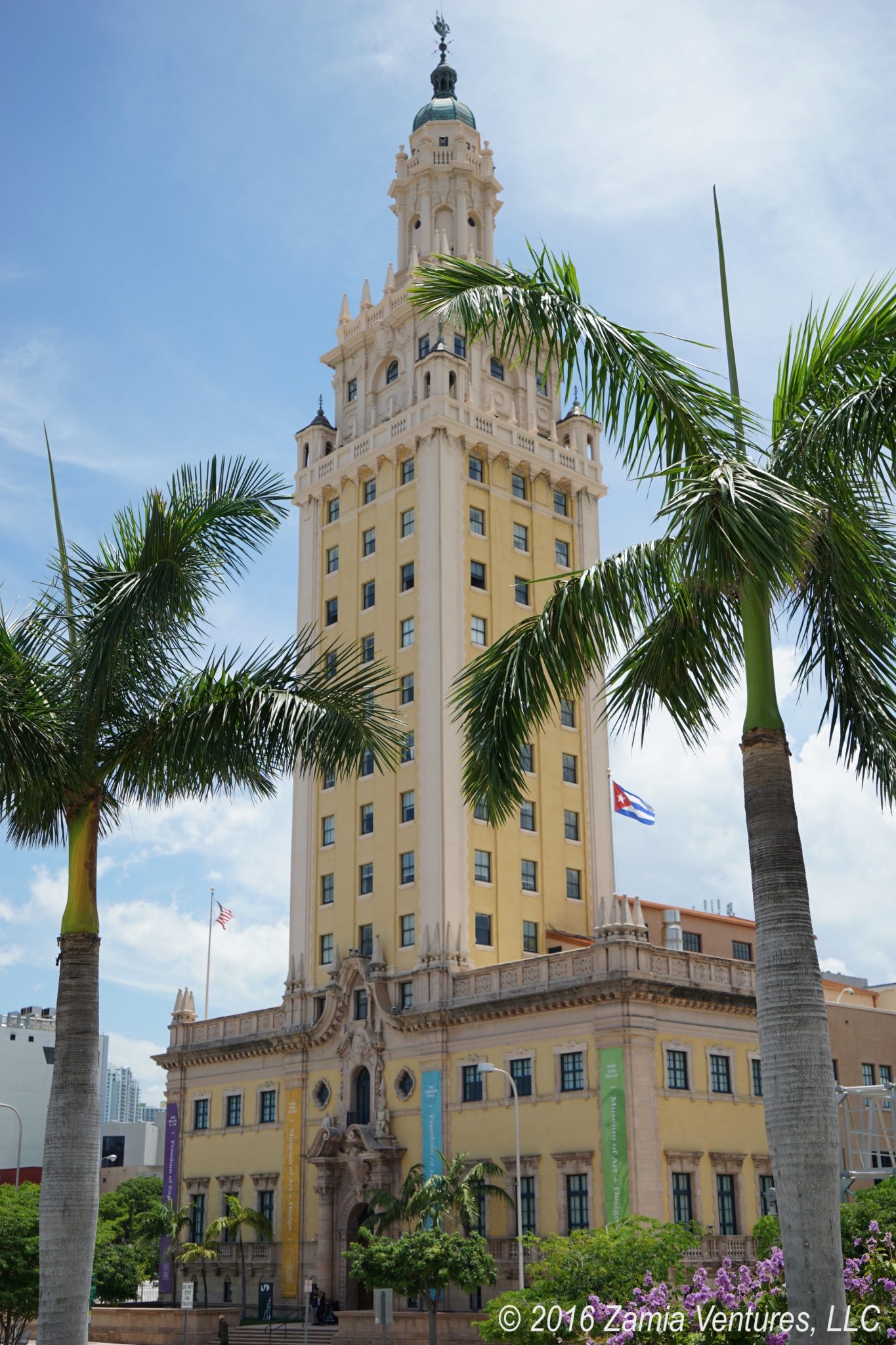 It’s one of the iconic buildings of Miami and has an inspiring name — yet we had never visited. We finally corrected this oversight and visited the Freedom Tower, located across from the American Airlines Arena at 600 Biscayne Boulevard (map).

Originally built as the headquarters of The Miami Daily News in 1925, it is an excellent example of the Mediterranean Revival style. The architects, Schultze & Weaver, designed several other well-known buildings in the same style, including The Biltmore in Coral Gables and The Breakers in Palm Beach, and all these properties feature notable towers with stylings influenced by the Giralda bell tower in Seville, Spain. The interior has rich details including carved ceiling decorations in the foyer and hallways, vaulted ceilings in the large open floor areas, and a restored 40-foot mural depicting images of the New World and the Old World.

According to Miami-Dade College (the current owner), the newspaper vacated the building in 1957, leaving it as one of the larger empty downtown properties when Fidel Castro’s revolutionary forces toppled the Cuban government in 1959. This accelerated the pace of Cuban immigration to South Florida and soon the existing infrastructure was overwhelmed. The 1962 the federal government opened a processing center for Cuban immigrants in a large and conveniently vacant downtown office building, and soon the immigrants had given it the informal names of the Freedom Tower and “El Refugio.” The building was used for 12 years as the primary entry point for Cubans immigrating to the U.S., and in addition to immigration officials it housed social service organizations guiding the penniless immigrants through medical and financial challenges. 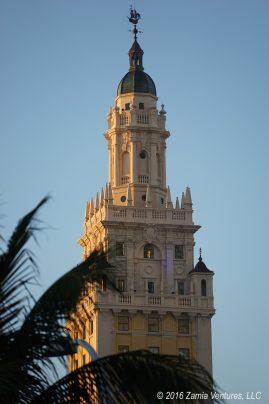 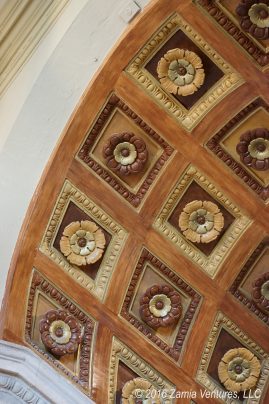 After the wave of Cuban migration slowed and the federal government lease ended, the property fell into disrepair until purchased for the creation of a museum documenting the Cuban immigrant experience. However, the leader of that effort died and his children sold the property to a real estate developer who proposed building a 650-foot condo tower on the rear of the property. After much controversy, the developer ultimately capitulated to the general outrage and donated the building the Miami-Dade College — somewhat similar to the result of the controversy over development the Miami Circle site.

Today there is a very small museum in the building which documents the story of Cuban immigration to Miami, along with space for additional art exhibits. While small, it is both FREE and interesting — our favorite combination. The museum highlights several important pieces of information about the 1960s immigrants that were new to me, or presented in a new way.

One is that the Cuban immigrants of the 1960s were generally educated middle class people who were, not surprisingly, very reluctant to give up their social and economic positions and have their children conscripted into working on agricultural collectives. The prized possessions that some immigrants and their descendants have donated to the museum included multiple diplomas from the University of Havana, secretly carried along with the bare minimum of personal possessions permitted by the Castro regime.

Another interesting fact was that the emigration was organized and authorized on the Cuban side as well — the Castro regime was apparently happy to have malcontents leave the country, at least at first. The Cuban government provided instructions for exit, consisting of limitations of personal items that could be taken (3 outfits of clothing), and promptly confiscated the homes and remaining property of the emigrants upon their exit. An incredible 300,000 people participated in the so-called Freedom Flights over a period of less than 10 years. Eventually the Castro government realized that the mass departure of the middle class left the country with a severe shortage of skilled professionals and clamped down on emigration.

The museum also provides information about the expulsion of Catholic priests and nuns, mostly involved with operating Catholic schools, which was an official policy of the Castro regime and led to forced transportation to Spain.

Another part of the exhibit focuses on Operation Pedro Pan, in which thousands of unaccompanied minors were sent to the U.S. by parents who hoped to give their children better opportunities (and freedom from indoctrination) regardless of whether the parents would ultimately be able to emigrate. Coordinated by the Catholic Welfare Bureau, the program operated multiple camps and placed children throughout the country with relatives or, failing that, with foster parents. I was impressed to learn that even the chairman of Florida Power & Light took in several Cuban boys to foster. It was a true community effort to help parents who risked never seeing their own children again.

I was particularly struck by a quotation displayed from a speech given by President Lyndon Johnson in 1965 in front of the Statue of Liberty: “I declare this afternoon to the people of Cuba that those who seek refuge here in America will find it…. Our tradition as an asylum for the oppressed is going to be upheld.” I encourage reading the entire speech. It’s a pretty stark contrast with today, when (crazy) people are talking about building walls to separate the U.S. from other countries and preventing people from immigrating to our country solely because of the religion they practice. Visiting the Freedom Tower forces me to ask, “What happened, America???” 🙁  There are not enough frowny-face emojis in the world.