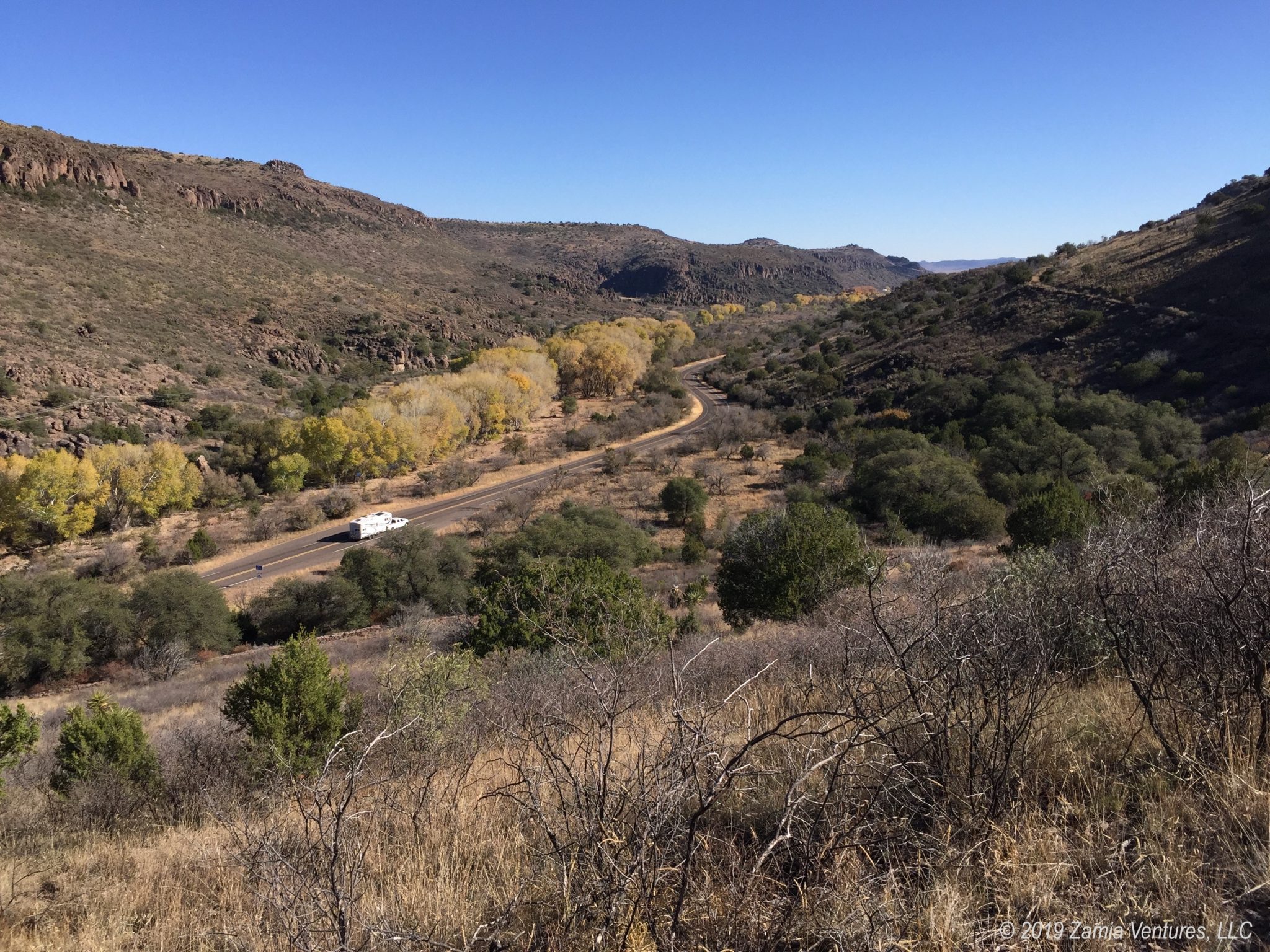 My ill-fated trip to the East coast last week affected our planning for the fall, since after leaving El Paso we needed to traverse many miles of West Texas and fit in several planned visits before getting ourselves to Austin in time for Thanksgiving. Our hop-scotching across the state started with a drive to Davis Mountains State Park for a short three-night visit.

Based on recommendations of others, we had looked forward to our brief visit to Davis Mountains State Park and were not disappointed. Our site was absolutely enormous, and a complete bargain at $25 a night for full hookups. And by full hookups, I mean FULL. We had electricity, water, sewer, AND CABLE TV.  Ken binged on ESPN while I split my time between CNN, the Food Network, and a few other beloved stations. For people whose entertainment needs have been filled exclusively by over-the-air TV and Amazon streaming for years, it was glorious.

When not glued to the TV we enjoyed seeing deer wander through our campsite in the mornings and evenings, and checked out a small portion of the park’s extensive trail system. This park certainly merits a longer stay than we were able to manage on this visit.

On our first full day we took the historic CCC trail from the campground over to the adjacent Fort Davis National Historic Park to check out the 19th century Army installation. The fort was originally established in 1849 to provide protection to gold-seekers heading to California on one of the overland routes, but was completely reconstructed following the Civil War to serve as a major outpost of the Army on the western frontier. The trail from the state park featured plenty of excellent views, and a chance encounter with a javelina. 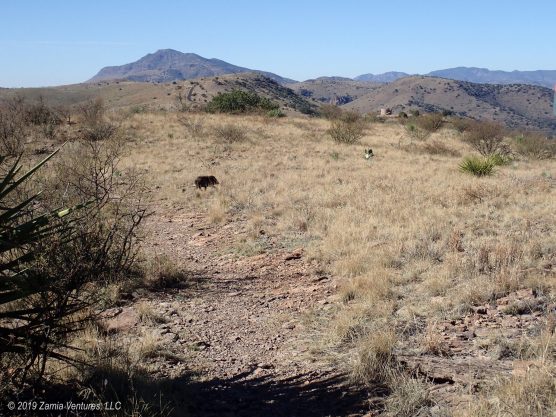 Javelina near the trail, CCC buildings in background 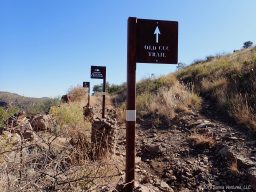 I liked these metal trail signs 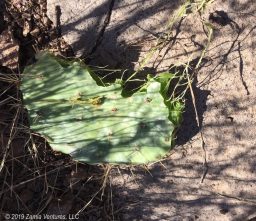 This prickly pear pad was a javelina snack 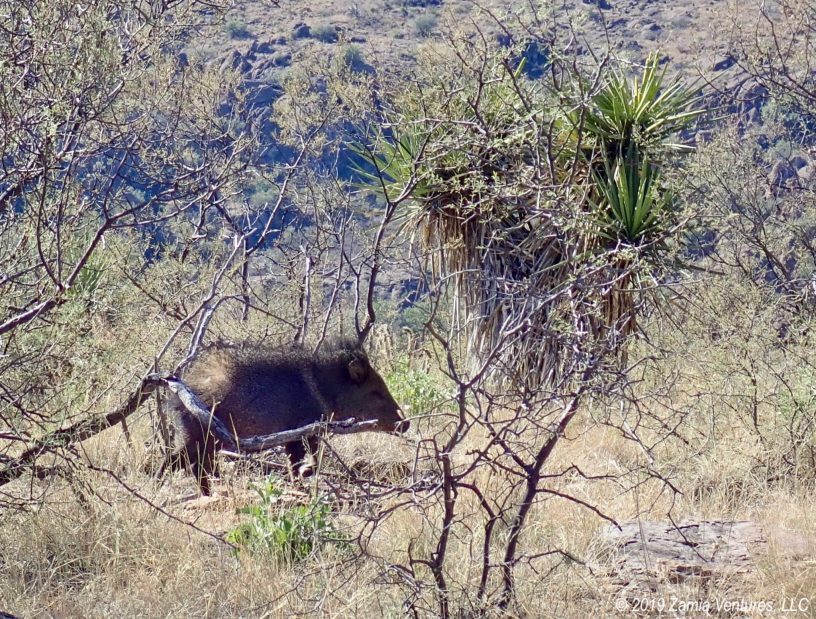 Javie reluctant to be photographed

The fort, like this entire county, is named after Jefferson Davis. It seems weird to have federal sites named after the political leader of an armed rebellion designed to tear apart the United States, until I remind myself that the man had an entire life before becoming president of the Confederacy. One of the prior roles that qualified him to lead the Confederacy was his job as Secretary of War under President Franklin Pierce, and this role led to things like Army forts being named after him. In one of the delicious ironies of history, Fort Davis is probably best known for being staffed after the Civil War by one of the Army’s first regiments of black soldiers (the 10th Cavalry), and they earned their nickname of “Buffalo Soldiers” through their bravery and tenacity in defending this area against Apaches raids. 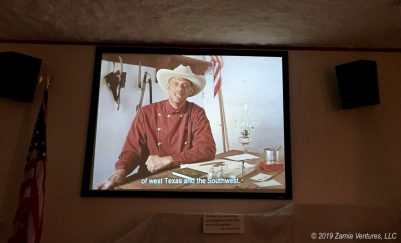 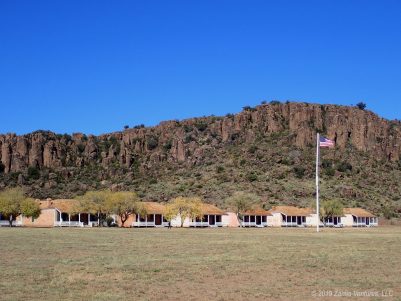 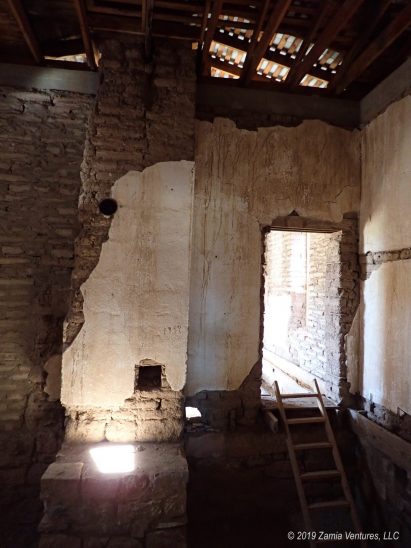 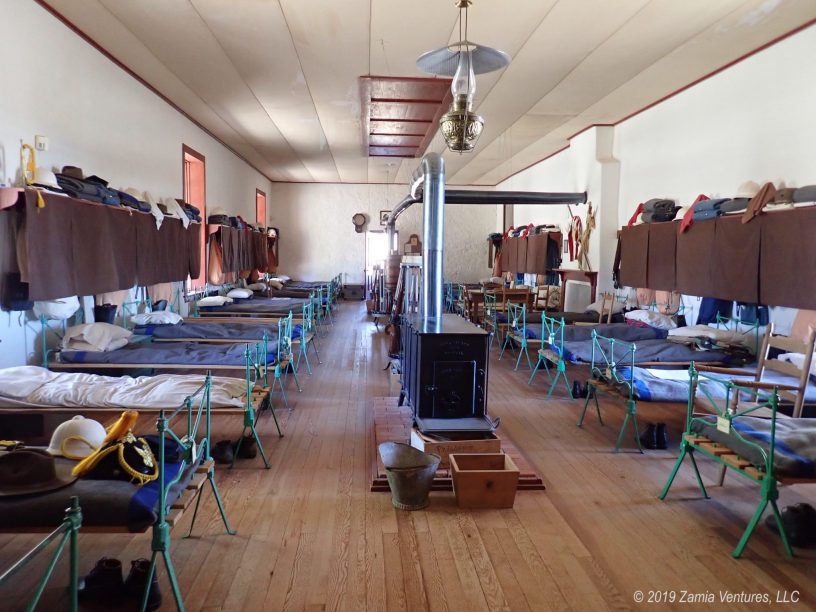 As usual, I insisted on watching the 14-minute introductory film, and was tickled to find that our narrator was one of Ken’s very favorite celebrities: Kareem Abdul-Jabbar. I mean, we might as well end the discussion there, because nothing can top Kareem. In a cowboy hat! Stumbling over the scripted words! Despite being completely star-struck, we decided to continue around the park to check out the historic buildings. This is one of the most extensive and best-preserved of the frontier Army forts, and we liked the mixture of reconstructed facilities furnished with lots of great period artifacts and ruins in various stages of repair. The information presented by the film and displays tied in nicely with our visit to the Frontier Army Museum at Fort Leavenworth in May 2018, and being out in a remote area of West Texas really helped us appreciate the isolation of the people who were posted here. Between the hike over from the state park and our wandering around the fort we clocked over 8 miles, which was more than enough for us.

On our second full day we headed about 10 miles up the road from the state park to the University of Texas at Austin’s McDonald Observatory, where we attended the daily presentation focused on the most important star of all: the Sun. Our presenter Saul did an excellent job of explaining different solar phenomena like sunspots, solar flares, coronal mass ejections, and the 11-year cycle. Seeing live images of the sun from one of the telescopes located just outside the visitor center was particularly cool.

After the solar viewing we participated in a guided tour that took us inside the domes of two important research telescopes: the 107 inch Harlan J. Smith telescope and the 11 meter (433 inch) Hobby-Eberly telescope. This tour slotted in perfectly between other astronomical sites we have visited. We saw the pinnacle of old-style refracting telescopes — where light passes through a glass lens at the end of a long tube —  at the Lowell Observatory in Flagstaff, including instruments with storied histories of discovery. At the UA Mirror Lab in Tucson we witnessed the creation of the mirrors for the Giant Magellan Observatory, part of the next generation of super-large optical telescopes and which are all reflecting telescopes. Here at McDonald, the instruments we toured are still very much in active use and at the forefront of available technology. The Hobby-Eberly is one of the three largest optical telescopes in the world today and uses a unique tiled mirror made of 91 separate hexagonal mirrors fitted together into one instrument. The Harlan J. Smith saw first light in 1969 and has been greatly surpassed in size but its integrated spectrograph (which splits light apart to help identify the signatures of various elements like hydrogen and helium) is one of the most sensitive in the world and is being used to examine the composition of the atmospheres of other moons in our solar system and potentially habitable planets orbiting other stars. It was a real treat to see these high tech instruments in person, and even better to do it in the company of an entertaining and informative guide. 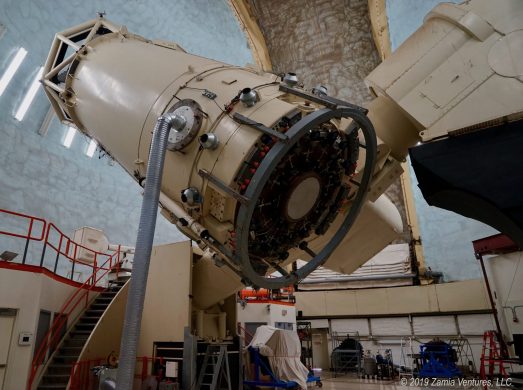 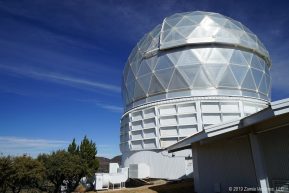 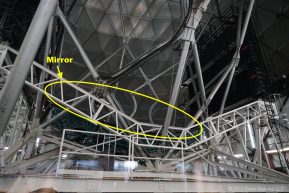 Hobby-Eberly mirror is hard to pick out….

Like many astronomical instruments the McDonald Observatory is located in a sparsely populated area, and to further limit the risk of light pollution the observatory has worked with the surrounding towns like Ft. Davis, Marfa, and Alpine to enact dark sky ordinances. In these hamlets, outdoor lighting is kept to a minimum and pointed downward to preserve the dark sky assets of the area. Our guide mentioned that the observatory is affected by light pollution from the oil and gas operations in the Permian basin to the north, similar to Teddy Roosevelt NP’s issues with Bakken shale mining, but the observatory is making some progress working with the industry to limit the damage. After all my travel drama last week I was too tired to haul all my photo equipment out at night to try to capture some night sky photos, but just eyeballing the very dark skies at night confirmed that this would be an excellent place to do just that. It’s another item to put on the To Do list for a return visit.

Next, we make a run for the border to check out Big Bend National Park.

9 thoughts on “So Many Stars at Davis Mountains State Park”