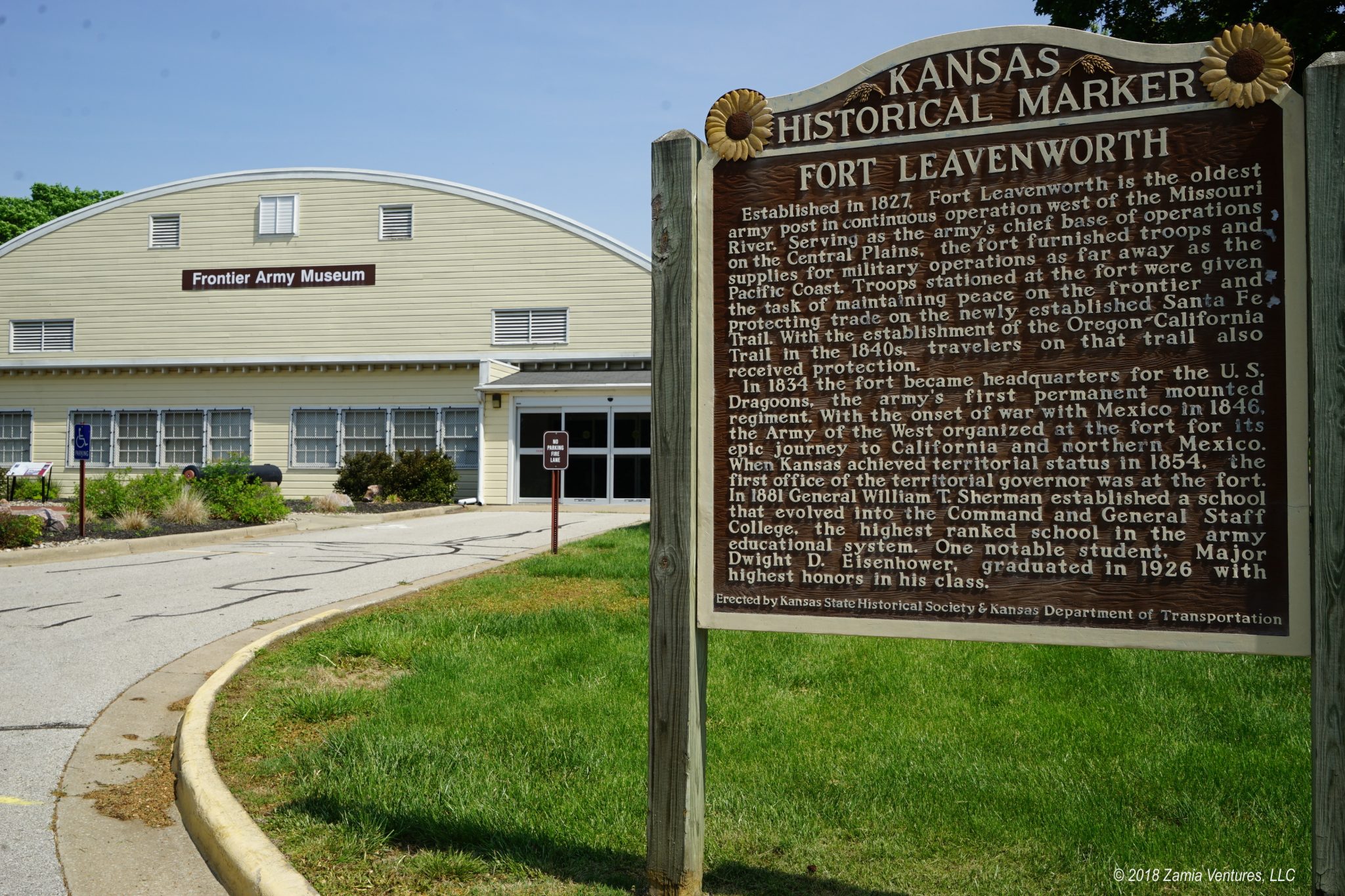 Our relatively brief stop in the northeastern corner of Kansas was full of unexpectedly interesting things, and did a lot to change our preconceived ideas about the Sunflower State. This visit included the last African American civil rights landmark we expect to see for some time, and started us thinking about the great western expanse ahead.

The lead plaintiff in the landmark school desegregation case of Brown v. Board of Education was the parent of an African American student in the Topeka public school system, and the Brown v. Board of Education National Historic Site interprets this hugely influential Supreme Court case. The 1954 decision invalidated the doctrine of “separate but equal” in public education, paving the way for desegregation in all other aspects of American life.

The primary physical resource of the NPS unit is the Monroe School, the all-black elementary school that Linda Brown was required to attend under the Jim Crow laws of the 1950s, instead of a neighborhood school located just seven blocks from her home. Unlike school districts in the South, which relegated African American children to decidedly inferior schools, Topeka actually followed through on the concept of “separate but equal.” Its school facilities and budgets were exactly equal for black and white students, so it was a perfect test case for the efforts to overturn the terrible Plessy v. Ferguson decision. 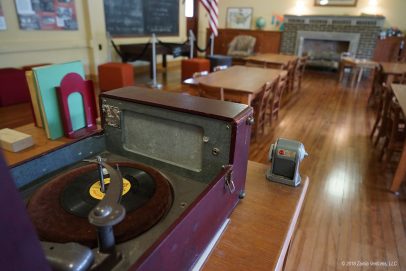 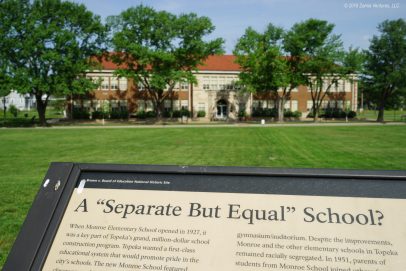 I really liked the physical presence of the site; it was a time capsule of a neighborhood elementary school from the first half of the 20th century. However, I wasn’t too impressed with the interpretive information. Through multiple videos and display boards, the site tried to tell the entire story of the civil rights movement from the time of slavery in the early colonies through the present day, including discussing how Nelson Mandela was influenced by the U.S. civil rights movement. It wasn’t wrong or misleading — and in fact this is a site that can truly celebrate a major civil rights victory — but it took the focus away from the subject of this particular site.

I would have liked to learn a lot more about the Brown case itself and the four others with which it was consolidated. How did the NAACP develop the legal strategy that was ultimately successful? What earlier cases did Brown build on in this overall strategy? How did the NAACP recruit plaintiffs, since they and their children would likely face repercussions from being the face of the challenge to segregation? How did the lawyers who argued the five consolidated cases coordinate their arguments to ensure they didn’t unintentionally contradict one another? Within the court, what was happening during the nearly two years between the oral argument in the case and the decision? How did Chief Justice Earl Warren manage to get a unanimous decision on a topic that was far from settled within U.S. society at the time, as the struggle to implement the decision clearly demonstrates? As usual, Wikipedia came to my rescue, but it’s a little disappointing that the site itself told me a lot about Rosa Parks but didn’t answer any of these questions.

Our experience has been that the best historic sites are the ones that embrace their assets and identity fully, and present information really well within that context without trying to do more. And our next stop was a great example of this philosophy.

I only discovered the Frontier Army Museum because it is listed as an adjacent historical site along the route of the Lewis & Clark Historical Trail, but once I found out a little more I knew we had to visit.

The museum is located inside Fort Leavenworth, which is a historical but also very much an active Army base. This is not to be confused with Leavenworth Federal Penitentiary, which we drove by but thankfully were not required to visit. Getting into this Army installation — which occupies more than 5,000 acres and is home to enough military personnel to provide students for three elementary schools and a middle school — requires a brief visit to the visitor control center for an access badge.

Once inside, we enjoyed a leisurely drive down tree-lined streets, with impressive brick buildings surrounded by gracious lawns, until we arrived at our destination. Fort Leavenworth is a major academic center for the Army, and the property has a bit of the ambience of a college campus.

The museum covers a lot of different topics, but they are all tied together nicely under the overarching theme of explaining the history and development of Fort Leavenworth. It is the oldest permanent Army installation in the west, and began as a frontier outpost engaged in protecting commerce before transitioning to being the supply depot and organizational headquarters for the Army’s entire western operation.

One of my favorite parts focused on the significance of soldier-explorers. In the early 19th century, the Army was at the forefront of exploring the western portion of the continent, as exemplified by the Lewis & Clark Corps of Discovery, a military expedition. To meet the needs of the time, the Army made a conscious effort to train professional explorers. The curriculum of West Point during this period included mandatory courses in geology, chemistry, and drawing, to prepare officers for the task ahead. The project of surveying and mapping the great western expanse was so important that the Army created a separate Corps of Topographical Engineers to carry out the work, which later became part of the Army Corps of Engineers. I appreciated how the interpretive materials connected the Age of Enlightenment’s interest in the natural world with the military and strategic goals of controlling territory across the North American continent, all in the form of significant Army expeditions to the west. Of course, I also squealed with delight at having the chance to see all the historic survey equipment used in these expeditions. Stay tuned, because I will probably be starting the official 18th and 19th Century Surveyor Fan Club before long.

Since this is a military museum located on an Army base, I wasn’t put off at all by the significant amount of information explaining advancements in military technology and how they changed the nature of conflict in the west. For example, the details about light artillery (which could be moved rapidly on pack animals) and the invention of different types of bullet casings were detailed enough to interest a military history buff but also comprehensible to a lay person.

The museum was notable for its huge number of excellent artifacts. It originated as a collection of historic horse-drawn vehicles, including wagons and sleighs used or owned by famous people like George Armstrong Custer. After expanding considerably over time, the museum has many fascinating artifacts from the daily life of soldiers. I enjoyed seeing historic standard-issue Army packs as they evolved over time, complete with eating utensils and survival gear. The museum even has an example of the final version of infantry blues issued as standard everyday wear for the American army. Our soldiers wore blue as their standard uniform from the time of the Continental Army until World War I, when olive drab uniforms were introduced and the era of modern warfare truly began.

The museum was also forthright about the uglier parts of its past, such as the fact the frontier Army basically spent the second half of the nineteenth century killing Native Americans. One of the more thought-provoking facts I learned at the museum was that men enlisted in the Army of the West at that time were more than 50% foreign-born. So the “taming of the West” that has been so romanticized in America’s self image — think of Kevin Costner in Dances with Wolves — was actually undertaken by immigrants, mostly from Germany and Ireland. Of course, virtually all of American history is a story about immigrants, which unfortunately seems to get lost, since people think of these historical figures as “Americans” without extending the same benefit to contemporary immigrants.

In what must have made for a truly remarkable multicultural community, Leavenworth was also the home base of the famous Buffalo Soldiers, four Army regiments comprised of African American soldiers and established just after the conclusion of the Civil War. These segregated regiments saw action in the west, but also served abroad in the Philippines, Mexico, and Korea. One interesting assignment for these regiments was serving as some of the first park rangers in Yosemite, Sequoia, and Kings Canyon National Parks, since the parks were designated decades before the National Park Service was established. The Frontier Army Museum presents information about these regiments, and there’s also a nice monument to the Buffalo Soldiers along the main road in Fort Leavenworth, so of course we stopped for pictures. 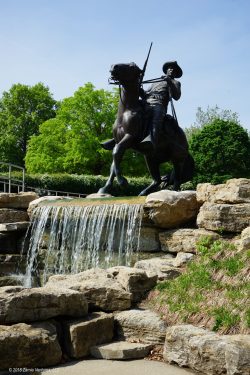 Front of the Buffalo Solider Monument 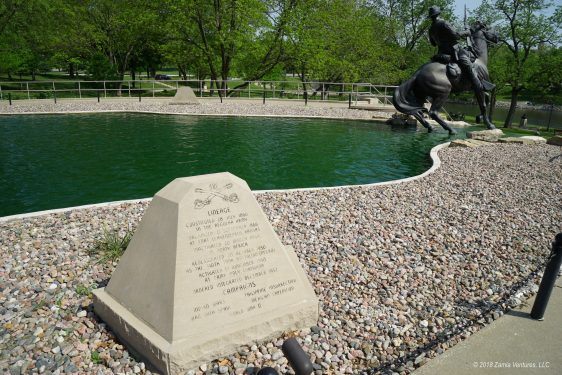 The weather during our visit was really warm — over 90 degrees every day — but generally sunny. We had selected our Army Corps of Engineers campground in part because it was very close to the Perry Lake Trail, a 29-mile loop that traverses federal lands surrounding the (artificial) Perry Lake. The 9+ miles we tackled were fairly easy but the gently rolling hills, open fields, leafy forests, and scenic lakefront views surprised us. This is definitely not what we expected from Kansas. 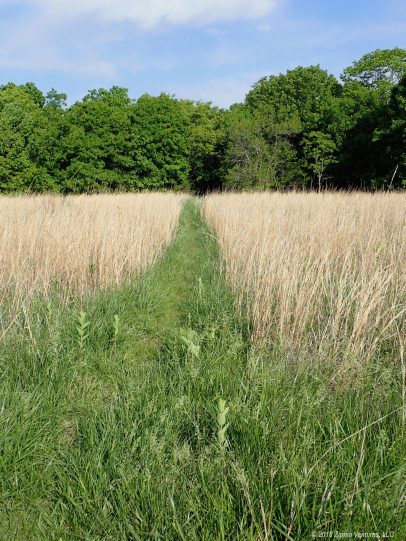 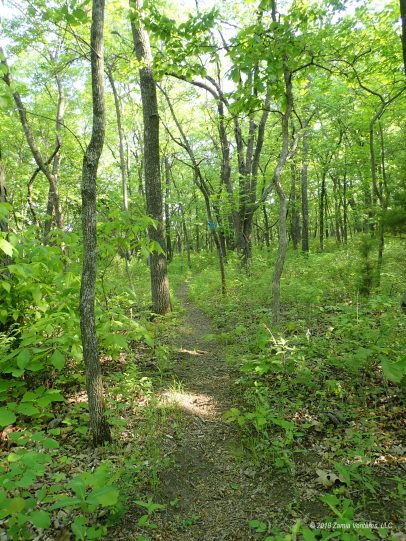 Then it turned into this unexpected woodland.

The natural areas were also incredibly peaceful. We never saw another hiker on the trail, so it was just us and plentiful deer, turkeys, squirrels, songbirds, and other wildlife. Oh, and also about 100 million ticks. It took us hours to find and remove the last of the little bloodsuckers. Ken and I both have an unfortunate number of tick-shaped freckles on our legs, so it will probably be weeks before we stop looking at our legs in fear that our freckles are crawling. Our pre-hiking routine, which already includes slathering on more sunscreen than I used in 40+ years of living in Florida, will now also feature a dousing in Deep Woods OFF. Live and learn. 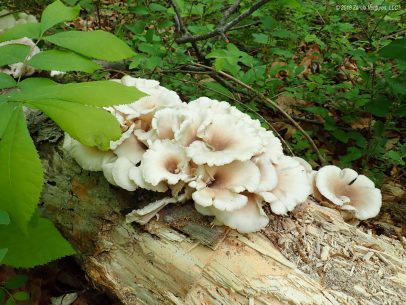 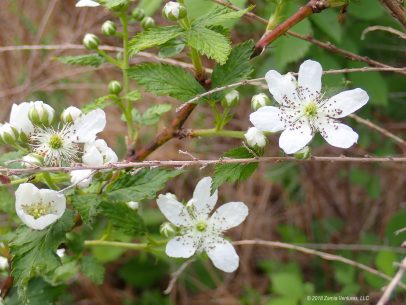 There will be blackberries later!

4 thoughts on “Turning Toward the Frontier in Northeastern Kansas”