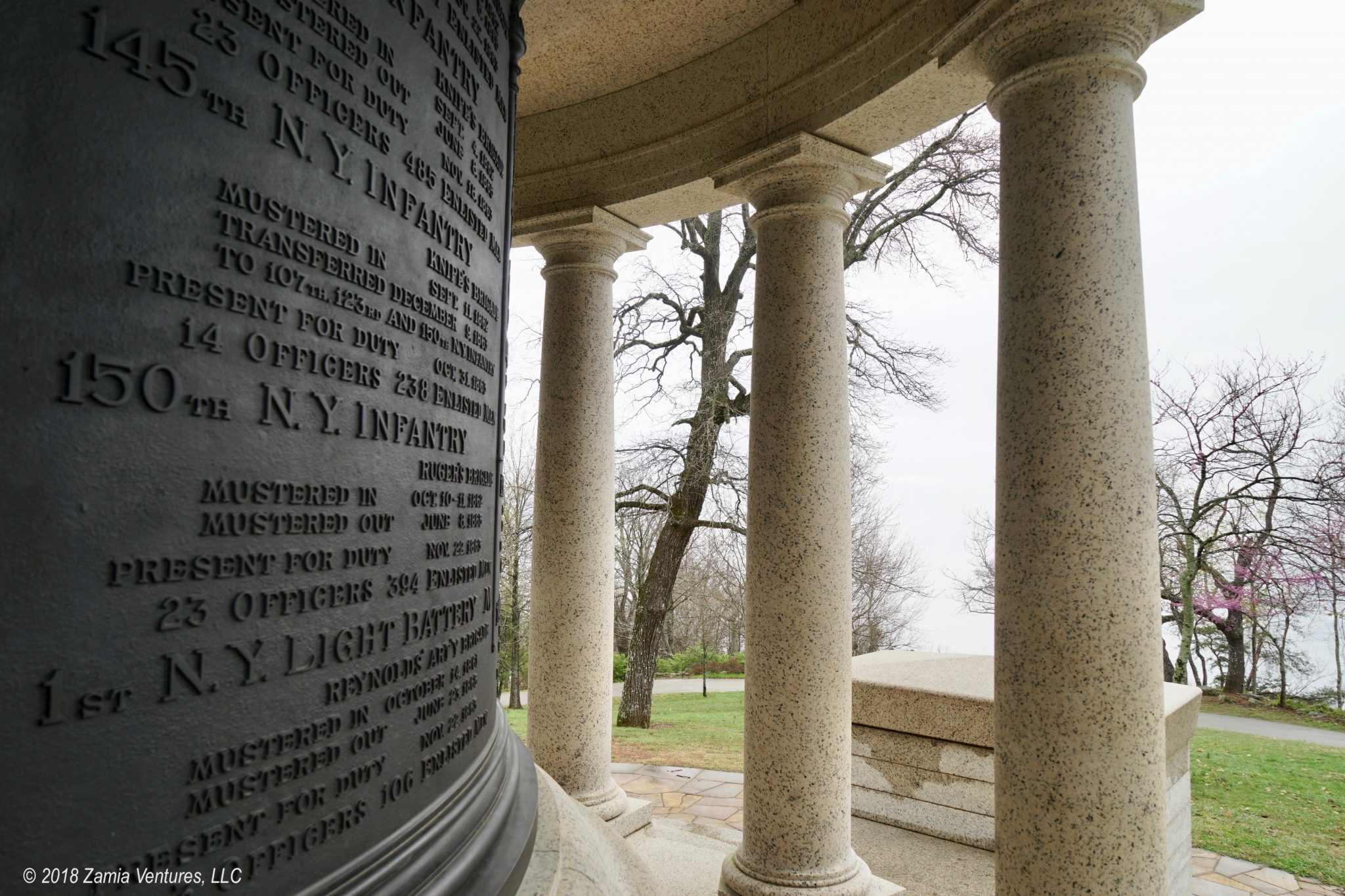 Our travels through Eastern Tennessee gave us the chance to visit several of the national sites that are helping guide our journey, and these locations near Chattanooga preserve and interpret records of historic periods ranging from 10,000 BC to 1865.

Tucked away down a small county road in the very northeastern corner of Alabama is the Russell Cave National Monument, the sort of place you would only visit — or even know about — if you are trying to get as many cancellations as possible on your National Parks Passport. Despite its relative obscurity, the cave is an important archaeological site, since it was inhabited by humans more or less continuously from 10,000 B.C. to 1650.

My knowledge of prehistoric peoples is woefully inadequate, despite my quality liberals arts education. As a result, I just have a hard time conceiving of a time when mammoths and other giant creatures roamed the earth and were stalked by bands of Paleo-hunters. Luckily several of our recent museum visits are helping to fill in the gaps in my education, and hopefully some of the newly-acquired knowledge will stick. We learned about the prehistoric people of Florida at the outstanding Museum of Florida History in Tallahassee, and we encountered the artifacts left by the people of the same four periods at Russell Cave: Paleo-hunters, Archaic, Woodland, and Mississippian. Each time period is defined by modern scholars based mostly on the technologies used by the people of the time (Woodland = after the invention of pottery). While early humans didn’t always leave many traces, the long period of occupation at Russell Cave left a relative treasure trove of artifacts.

The cave itself is one of the few sites in the southeastern U.S. with such a rich and uninterrupted record, thanks to its very convenient natural shape and location. Situated on the side of a hill, with a large overhang and some boulders protecting the entrance, and a nearby source of fresh water, the cave offered relatively secure and snug quarters for seasonal occupation. After the customary video introduction and review of the interpretive materials in the visitor center, we ambled along a nice boardwalk to peer into the cave entrance. 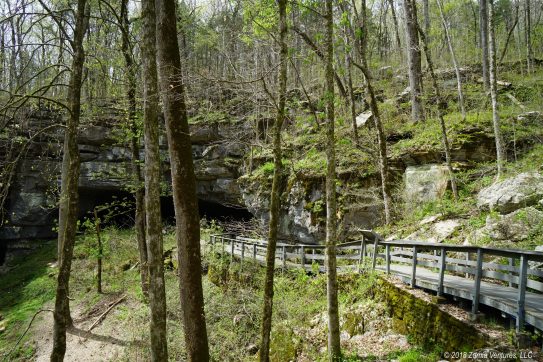 The boardwalk leads to the mouth of the cave 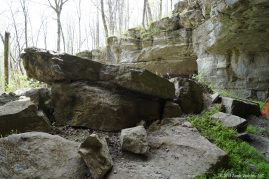 View from the interior 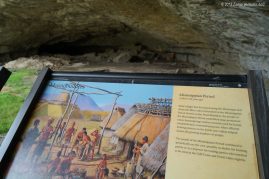 Interpretive signage inside the cave

Though the site was small and our visit was quick, the information was presented well and without weird cutouts. One of the more curious aspects of the cave is the story of how it became a federal site. The land was private property until the 1950s, when amateur archaeologists became interested in the local stories of arrowheads being found in the cave. After the amateurs completed several years of very productive excavations, the property was purchased in 1956 by the National Geographic Society. Two years of excavations by professionals yielded over 10,000 artifacts. But for unknown reasons National Geographic lost interest in owning the property and donated it to the American people in 1958. It seems like the sort of gift that is more trouble that it’s worth, sort of like the time in second grade a friend “gifted” me hamsters. I mean, did the federal government really want to own and maintain a covered-over archaeological site in remote Alabama? Regardless of the reason for its existence, we enjoyed the site and it checked off another National Park Service unit for us.

Less mysterious in its origin is the extensive Chickamauga and Chattanooga National Military Park. This 5,000+ acre park was the very first national military park and preserves a number of different sites relating to the bloody Battle of Chickamauga and the ensuing Chattanooga campaign during the Civil War. We’re not super fascinated by military history — the details of troop positioning and battle tactics are just way too arcane even for us. So for our visit to the park we chose to see Lookout Mountain to get a slice of Civil War history along with great views over the vicinity. After some white-knuckle driving up the windiest road we’ve driven yet in our truck, we emerged in a small community filled with lovely homes enjoying breathtaking vistas.

Or at least, they normally have great views. We happened to be in town on a rainy day, meaning that we enjoyed a vivid recreation of the actual conditions of the “Battle Above the Clouds.” Despite the inclement weather, we enjoyed wandering around scenic Point Park, seeing the city and valleys spread out below and appreciating exactly how Lookout Mountain earned its name. The Civil War information was all interesting, and our ascent up the mountain and our views of the very vertical sides gave me even more admiration for the people who looked up the side of this mountain and answered the call to “Charge!” The information about archaeological excavations at Moccasin Bend, just below the mountain, helped reinforce what we had so recently learned at Russell Cave about the early inhabitants of the Americas. The Moccasin Bend excavations also yielded trade goods that were procured from the Hernando de Soto expedition, the subject of a prior visit in Florida. I am loving how all the sites we are visiting are weaving together to tell a rich and complicated story of American history. 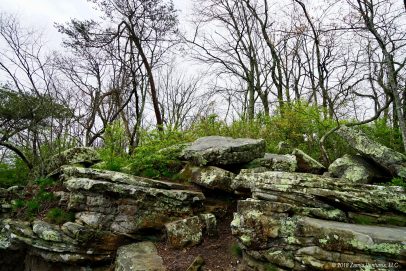 The craggy face of the mountain.

My favorite part of this park was also the story about how it came to be. Twenty-five years after the conclusion of the Chattanooga Campaign, 10,000 (white) civil war veterans came back to Chickamauga to celebrate a Blue and Gray BBQ as reunited countrymen. The following year, decades before the first national parks were established, Congress voted to create this first national military park to commemorate and preserve the legacy of the Civil War. The park commission was composed of both Union and Confederate veterans, and the first park signage was intended to tell the story of the battles evenhandedly from both sides. The most prominent monument within Point Park is the New York Peace Memorial, which was erected by the State of New York and features a statue of former enemies shaking hands below an American flag as well as the words of President McKinley: “Reunited — One country again and forever.” In an era of great division over Civil War monuments, this is a sentiment that I can get behind wholeheartedly.