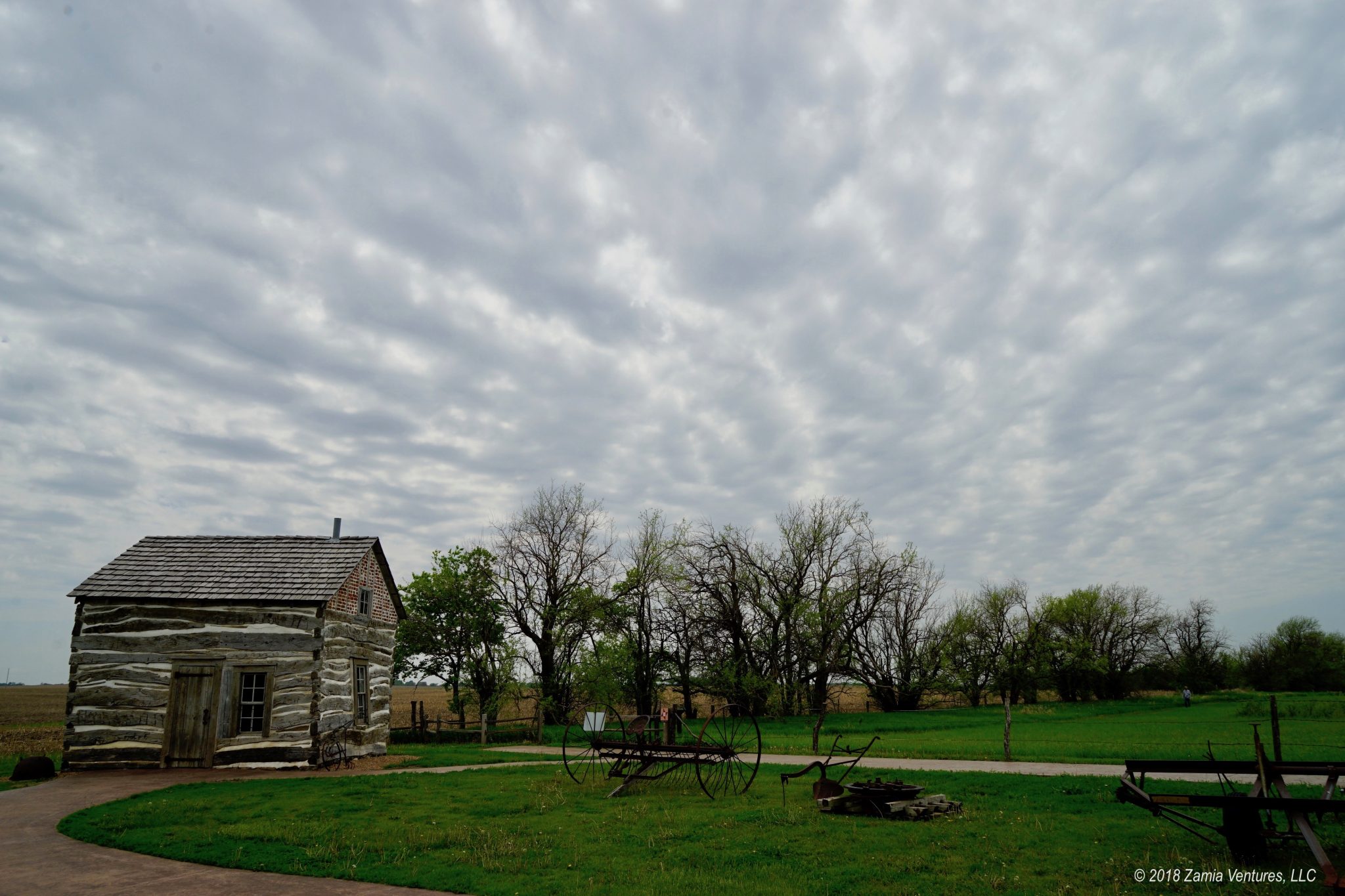 Like our stop in Kansas, our visit to Nebraska brought us to a place I never imagined we would be tourists, and we ended up enjoying it much more than expected. Well, other than the fact that I now have the Counting Crows song Omaha permanently looping in my head. So let’s get right to the heart of matters.

On our drive from Topeka to Omaha, we made a point to swing by the Homestead National Monument of America (click for location map), a National Park Service unit that interprets a unique part of American history. The Homestead Act of 1862 and its follow-up legislation were critical to encouraging development of the great middle plains of the United States, and under these acts 270 million acres — 10% of the total land area of the country — was given away by the federal government to small farmers for only the nominal cost of filing a claim. To “prove up” a claim for the free land, the registered homesteader was required to live on the land (so a dwelling needed to be built) and cultivate it for 5 years. I would speculate that this was the greatest transfer of wealth from the federal government to citizens in US history, dwarfing every other form of welfare program ever conceived. And of course most of the beneficiaries were white men, but I digress.

While the biggest impact of the Homestead Acts was in the Great Plains, homesteads were granted in 30 different states. The incredibly striking visitor center for this site starts with an extended walkway mounted with depictions of each homestead state showing, by cutouts, the share of the total land in the state that was initially acquired under the Homestead Acts. We were surprised to see the relatively large amount of land distributed in Florida. 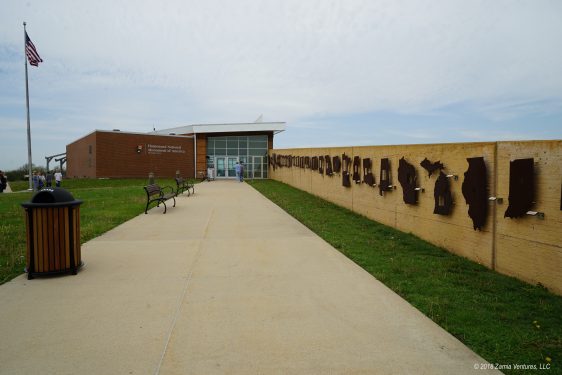 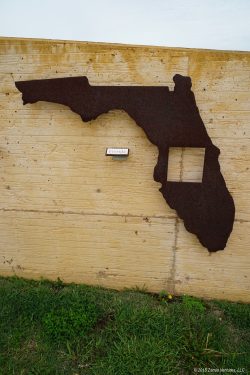 The historical site is located on the property obtained by Daniel Freeman, the first person to stake a claim when the first Homestead Act became law on January 1, 1863. The NPS has made the experience much more vivid by restoring the land to the tallgrass prairie ecosystem that would have existed when the first homesteaders arrived here in southeastern Nebraska. The pictures really do not do justice to how large, open, and untamed the whole property feels.

The interpretive materials inside the stunning visitor center told the sweeping story of a series of laws that changed the American landscape for 123 years. The topics ranged from chronicling advancements in agricultural technology — barbed wire and mechanized combines were huge — to the daily life experiences of homesteaders. There were even interesting artifacts and photos from the last person to receive land under the acts, a man who received his land title in Alaska in 1988.

However, instead of focusing on the triumph of the human spirit, the introductory film and interpretive materials were surprisingly depressing. There was a very prominent emphasis on the fact that the lands given away by the federal government had been the home territory of many different Native American tribes since time immemorial. Ripping these people from their land and banishing them to tiny reservations with poor conditions dealt a death blow to the culture of these nations. The materials also emphasized the absolutely wretched conditions many homesteaders faced, which led to more than 40% of filers failing to prove their claim — i.e., abandoning the land before 5 years elapsed. Besides the backbreaking work of clearing and tilling virgin lands, homesteaders (many of whom were recent immigrants) encountered unimaginably bad conditions like lethal tornadoes, softball-sized hail, summer locust swarms, frigid winter temperatures, and soul-crushing loneliness. These people were tough. 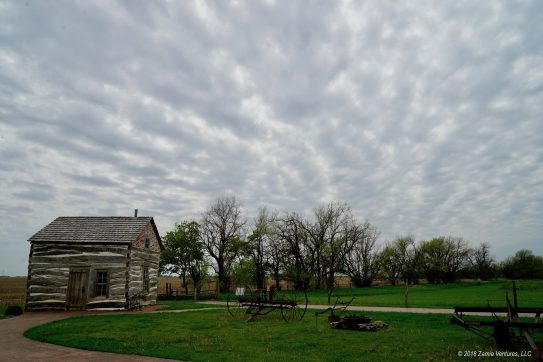 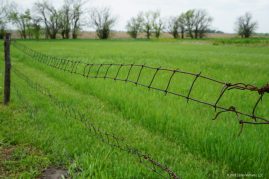 Part of a display of different types of barbed wire 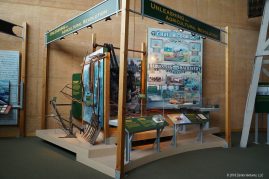 One of the most interesting aspects of the Homestead Act is that it was pretty explicitly designed to encourage immigration. President Abraham Lincoln and the other members of the federal government recognized that there were not enough people in the existing states to settle the seemingly endless western expanse of the country. The Homestead Acts made homesteading available to any head of household who was already a US citizen, or declared an intention to become one (which was accomplished by the filing of the homestead claim itself). The required five-year period of occupancy coincided precisely with the residency requirement under the naturalization laws of the time. The Homestead Acts perfectly laid out the path for an immigrant to come to the US, acquire a place to live and farm, and become a citizen at the same time the land title was granted.

The Acts had their intended effect, and quickly. By the time of the 1870 census, the populations of Wyoming and Montana were 39% foreign born and the population of the Dakota Territory was 34% foreign born. It’s more than a little disheartening that these states that were literally built on the blood, sweat, and tears of immigrants are now places where the public is the least supportive of immigrants. America is truly a country of immigrants, and nothing good comes of failing to remember our history.

While the site reinforced my preexisting views about the important role immigration has played in the growth and development of the US, it did cause me to reevaluate my thinking on one point. I am a major advocate for labor mobility — in order to have the best opportunities, people should be prepared to move out of their hometown. Unless someone is from a huge metro area like New York City, the very best place to capitalize on her talents and skills is almost certainly not going to magically happen to be the very town where she happened to grow up.  Speaking for ourselves, Ken and I could never have enjoyed the careers we pursued if we had stayed in the charming but small towns where we grew up. Further, our economy is strengthened when talented people cluster in places like Silicon Valley or Nashville to develop world-leading centers of technology or entertainment. I just don’t have a lot of patience for people who complain about the lack of jobs in their hometown, but then won’t relocate to any of the places where there are plenty of jobs.

Visiting the Homestead National Monument, however, gave me a slightly different perspective. The interviews with the descendants of (successful) homesteaders poignantly illustrate their deep and almost spiritual connection to the land first broken by their ancestors. Having earned the property through hard work, the homesteaders and their descendants seem to view themselves as long-term stewards of the land. I can appreciate that it would be very difficult to just pick up and move away from a multigeneration property like many of the farms here in Nebraska, even if great opportunities are calling elsewhere.

The other major attraction that we visited in Omaha is the Strategic Air Command & Aerospace Museum. The museum primarily commemorates the World War II heritage of Omaha and the role of Offutt Air Force Base as the headquarters of our Strategic Air Command, which controlled the nuclear-armed bomber groups and land-based nuclear arsenal (missiles in silos) that made the Cold War so nerve-wracking. The museum has an outstanding collection of historic military aircraft on display in two huge hangars, and in my experience this opportunity to examine the aircraft up close is rivaled only by the Pima Air & Space Museum in Tucson.

The main hangar is devoted primarily to historical bombers and reconnaissance aircraft, but also has interesting materials relating to the siloed Titan and Minuteman missiles and plenty of interpretive information about the state of constant readiness that existed throughout the Cold War. The materials explaining the early development of strategic air power (bombing transportation infrastructure, manufacturing centers, and cities as opposed to tactical fire power deployed in combat) in World War I and World War II were interesting. I also learned a lot about the Doolittle Raid that was influential in turning the tide in the Pacific Theater in 1942, including the challenges involved in launching medium-range B-25 bombers (as opposed to fighter jets) from an aircraft carrier. The second hangar is mainly focused on cargo and support aircraft, but also features information about the B-29 production facility in Omaha which contributed thousands of aircraft to the war effort, including the Enola Gay. 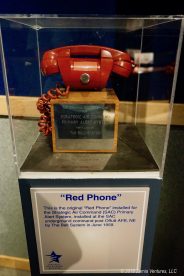 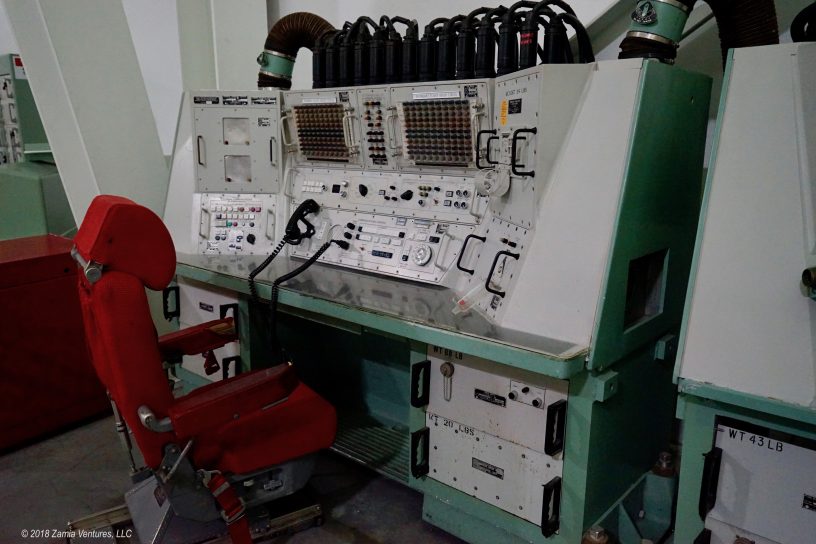 The museum offers lots of detailed technical information for the real aviation nuts, and fun learning tools like partially deconstructed engines and fuselages showing the inner workings of the planes. A jewel of the collection is a B-36 Peacemaker, a very rare example of the largest combat aircraft ever built. This massive plane was powered by 6 huge propeller engines and four jet engines, and it made all the normal-sized planes look like toys. Its range was so great (10,000 miles!) that there were no contemporary fighters that could provide escort, so the Air Force experimented with attaching small support fighter aircraft to the underbelly of the Peacemaker, which would unhook and deploy when needed. Only two prototypes of the Goblin (XF-85 Parasite) were ever built, and one is here. 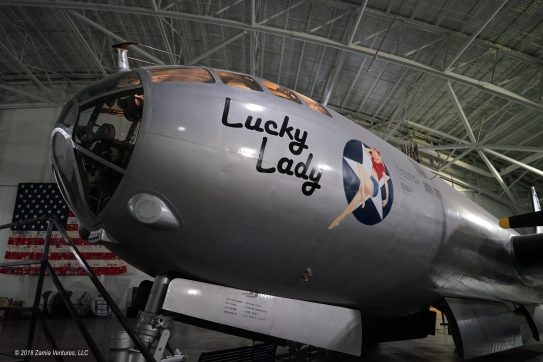 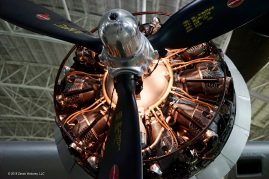 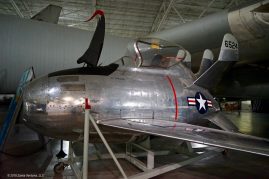 Goblin parasite to the Peacemaker

The museum tied in nicely with several other sites we’ve visited. It was cool to see a C-54 Skymaster, which was the cargo workhorse during the Berlin Airlift, an important part of the story at the Truman Library. The museum had a nice display focused on the Tuskegee Airmen and their contribution to both the war and social change. The discussion of building the B-29 production facility in Omaha reminded me of the incredible scale of the war effort we previously witnessed at Oak Ridge. 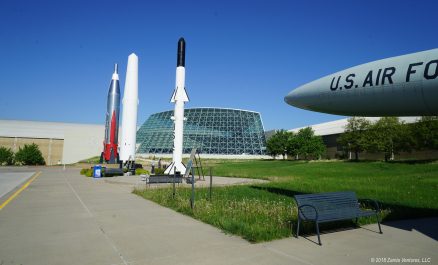 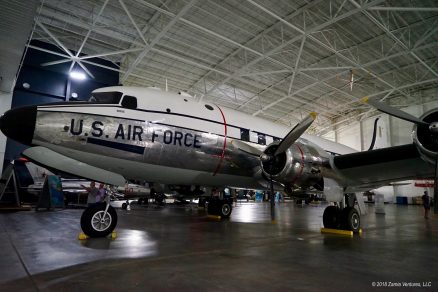 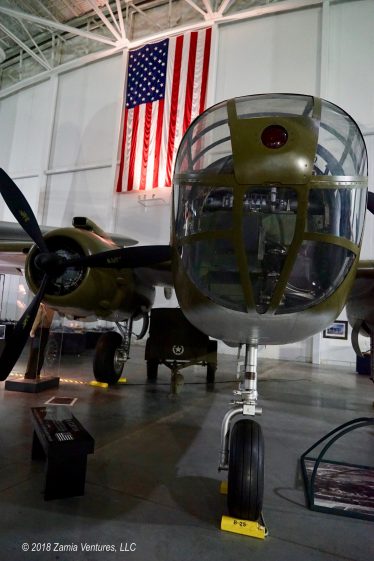 B-25, the model of Doolittle Raid aircraft

During our time around Omaha we also made sure to visit the headquarters of the Lewis & Clark Trail (it’s basically a bookstore in the lobby of the NPS midwest regional office) and check out the Missouri River from atop the very iconic pedestrian bridge connecting Omaha and Council Bluffs, Iowa. We also made our final stock up trips to prepare us for the several months ahead that we will not see a Costco or a Whole Foods. All in all, a pretty successful visit to a state that I knew very little about before our visit.