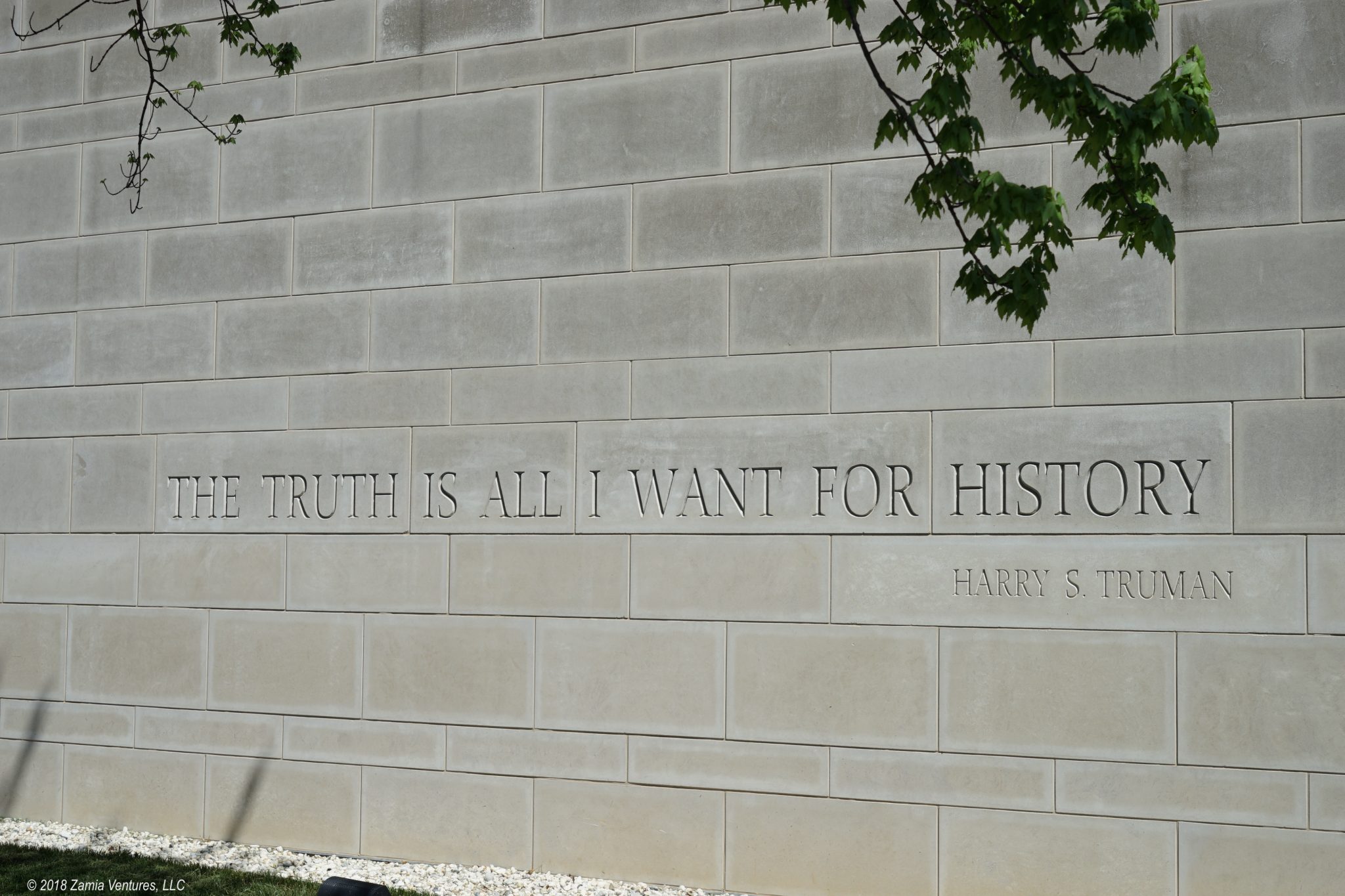 Independence, Missouri is Harry Truman country. There are signs all around the downtown area adorned simply with a silhouette of Mr. Truman with his cane, which was a familiar sight on the streets of Independence after he left the presidency. The fellow at the hardware store who filled our propane cylinder recounted his memories of seeing Mr. Truman walking around town in the 1960s. This is the place to see the Harry S. Truman Presidential Library and Museum, as well as the home that Harry and Bess shared for over 50 years, which is the main asset of the Harry S. Truman National Historic Site.

This was our first visit to a presidential library, and it was completely fascinating. There are two main permanent exhibits, detailing the president’s time in office and his personal life and history, as well as as space for rotating exhibits. Right now the rotating exhibit focuses on Truman’s service in World War I; he was the only U.S. president who was a WWI combat veteran. Like all the exhibits, it combines a large amount of physical artifacts ranging from his foot locker and uniform to his horse tack with photos and letters to tell a rich story about Truman’s motivations for serving and his experiences in the field. It’s somewhat reassuring that the person who ordered the first use of atomic weapons was a combat veteran who could truly appreciate the human cost of war, but incredible to realize that he fought on horseback. Talk about seeing a lot of change over one’s lifetime.

The oval office reconstruction — which I understand is a staple of all presidential libraries — was very cool, but for me the highlight was the series of interpretive displays covering President’s Truman’s time in office. Different areas used interesting visual and digital displays to present information about the many challenges that arose during his term in office, ranging from foreign affairs to domestic political struggles. While the library is unsurprisingly very pro-Truman, the displays do not hide the fact that many of the decisions he made were extremely controversial at the time, and even to this day.

The amount and variety of artifacts was just incredible. Several of our favorites were the type-written daily White House agendas annotated with the president’s notes at the end of each day; it was really interesting to see the president’s contemporaneous impressions of meetings jotted down. There were also heartbreaking items demonstrating that being president is definitely not for the thin-skinned, such as a purple heart sent to the president by a grieving father whose son was killed in the Korean War along with a harrowing letter (see the letter here). In a similar vein were the many letters and telegrams sent to the president to protest his dismissal of General Douglas MacArthur; a representative one on display sarcastically congratulated the president on “selling your country down the river.” The controversial topics, like the decision to use nuclear weapons (developed through the Manhattan Project) to end World War II, were given thoughtful treatment from a variety of perspectives, including different contemporary viewpoints as well as later analysis by historians. 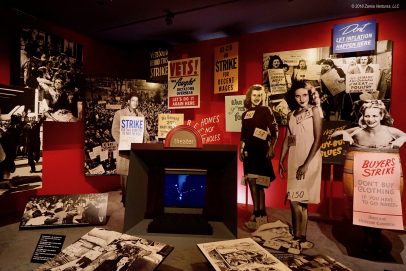 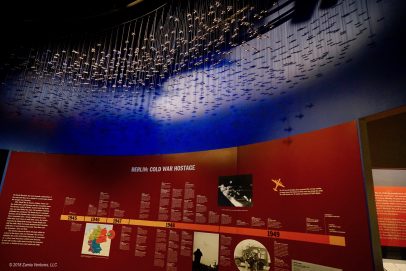 Timeline of the Berlin airlift; model planes represent daily landings in Berlin at the height of the airlift.

What struck me most was sheer volume of drama that Truman dealt with throughout his presidency. Here’s a brief list of the big issues he confronted in just the first five years in office, most of which were major social and political changes that affected the lives of all Americans:

This list doesn’t even include the Korean War, which started in 1950. Reading the news today makes me crazy, so I can hardly imagine the emotional upheaval that Americans must have experienced during these tumultuous times. The library was Truman’s main project after he retired from the presidency; he thought it unseemly to use the prestige of the presidency to gain positions on corporate boards or promote products. The museum does a great job of illustrating and examining Truman’s life and presidency and is a veritable treasure trove of artifacts, papers, and archived information for historians.

While in town we also visited the Victorian house that was the home of Harry and Bess for their entire married life. Like Ulysses Grant, Truman married a well-to-do woman who brought the family a great home. Truman enjoyed living in the close-knit community of Independence, and came home whenever his duties as Senator or President permitted. In his later years, the ex-president wandered around town without any Secret Service protection (or, until 1958, any sort of pension). Just like today, the town was very supportive and protective of its most famous son. The town painted the home white while he was president in keeping with its role as the “summer White House” and put up an iron fence around the property to keep people from wandering too close and bothering the president. Apparently the people of Independence are very polite and follow rules, because it’s a pretty flimsy fence! Seeing the town of Independence and Truman’s home really helped us appreciate the humility of our 33rd president, who served during some exceptionally difficult times.

The downtown area is sort of a time capsule from Truman’s time, with Independence Square dominated by the courthouse that Truman helped build when he was presiding judge of Jackson County from 1927 to 1935. We enjoyed stopping for ice cream and phosphates at Clinton’s Soda Fountain, an old-fashioned store located in the same building as the pharmacy and soda shop where young Harry S. Truman had his first job. The whole downtown area is low-rise, walkable, and close to residential areas. 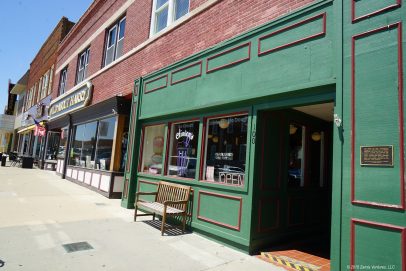 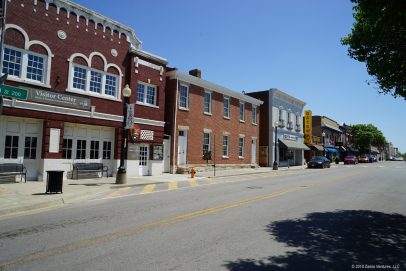 Which is why I was not expecting to see this two blocks from our campground:

It turns out this is the head temple of the Community of Christ, formerly known as the Reorganized Church of Jesus Christ of Latter Day Saints (RLDS Church). This is a Mormon denomination that was previously unknown to me and is completely separate from the Salt Lake City-based Church of Jesus Christ of Latter Day Saints (comparison information here). I was pretty surprised to learn that there’s a Mormon denomination that has allowed women to be priests since 1984, and has a theological focus on peace and social justice. From my brief reading on Wikipedia, it seems like the Community of Christ is about what you would get by crossing the LDS and Unitarian Universalist churches, which is pretty remarkable. It turns out the heartland is filled with thought-provoking people and places. The diversity of America continues to amaze me.

6 thoughts on “Hitting the Heartland to Learn About Harry”