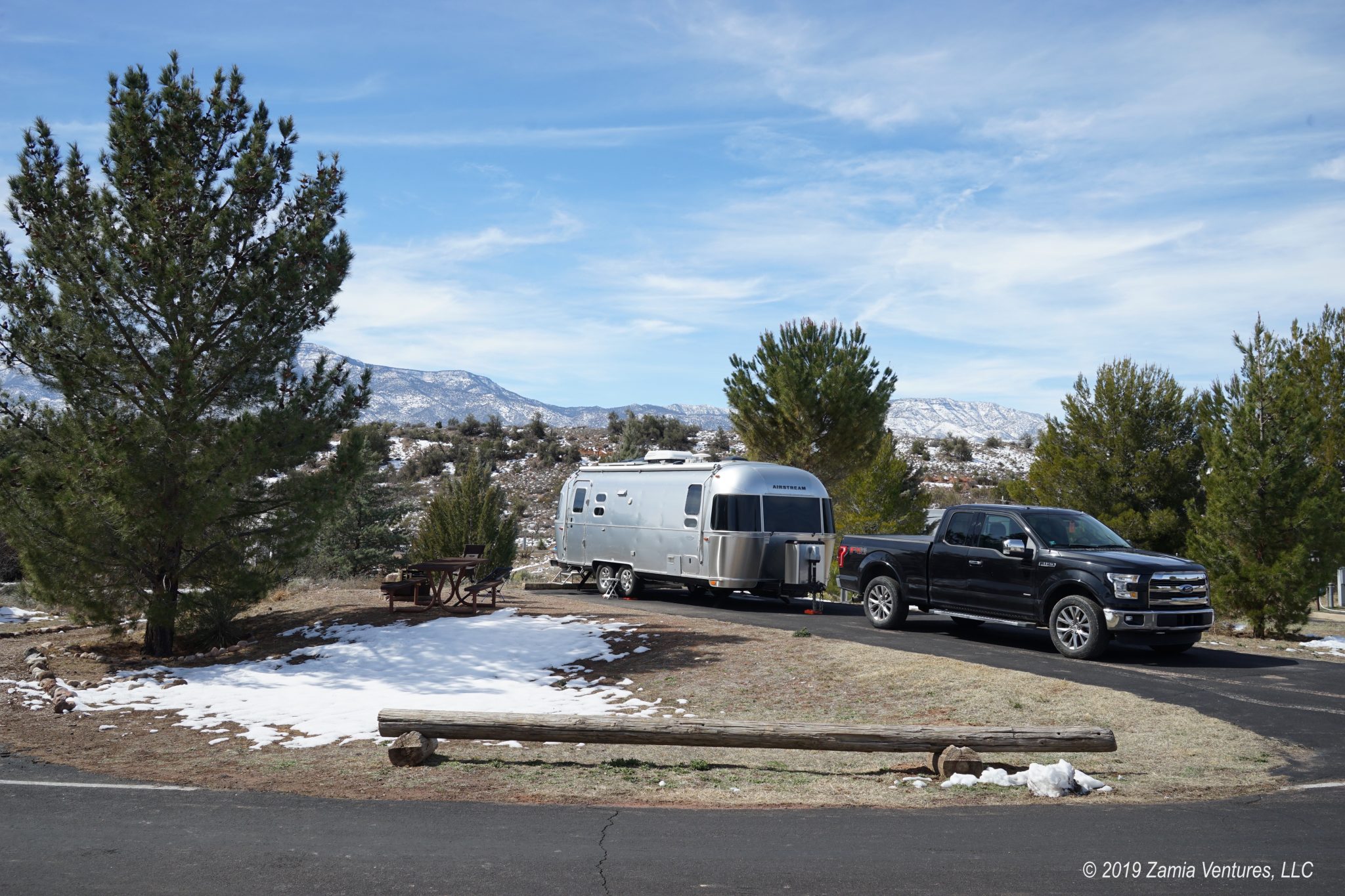 After our stop at Picacho Peak we skipped right over the Phoenix metro area and landed in the historic town of Cottonwood, nestled along the Verde River at an elevation of around 3,500 feet. That increase in elevation meant a few things: our arrival just days after a major snowstorm meant we encountered plenty of white stuff still on the ground, and for the first time since mid-December we were returning to an environment dominated by trees rather than desert plants like cacti and Joshua trees.

While the cold weather hung around, we spent a morning at the Tuzigoot National Monument to explore a pueblo that was founded around the year 1,000. The site is a ruin that was excavated and partially reconstructed in the 1930s, and today the museum uses that Depression-era project as a case study in What Not To Do. Just about every method that was used by the original excavators has been disavowed by modern archeology. To wit:

Despite the problems with the original investigations of the ruins, the National Park Service owns the issues and has turned the site into an opportunity to communicate how practices have improved. 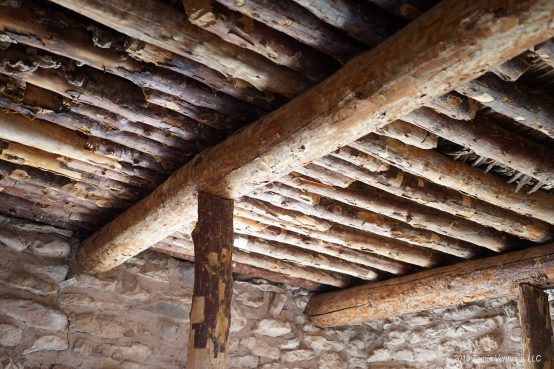 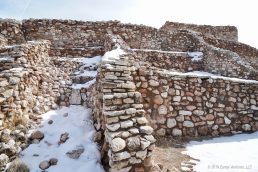 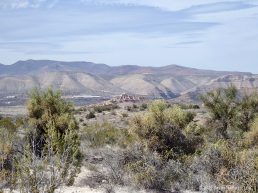 Pueblo as seen from trail at Dead Horse Ranch 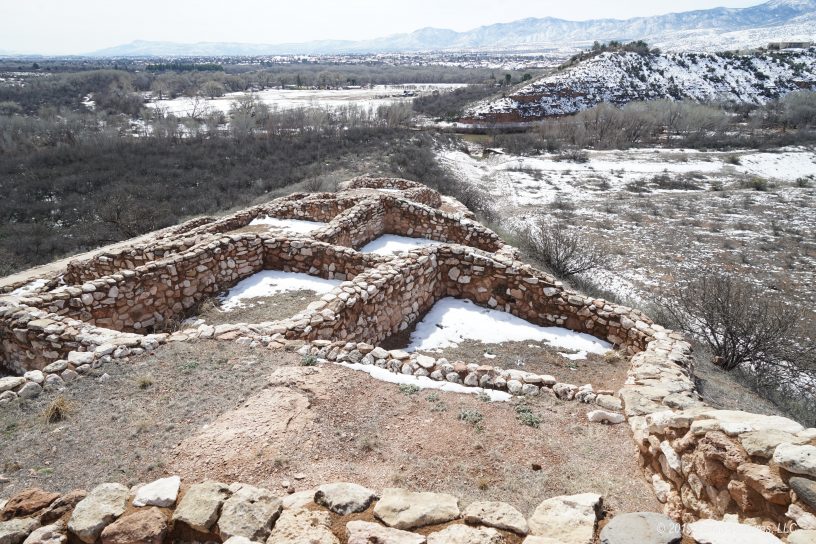 Pueblo sits on a hilltop with sweeping views

The hilltop site was occupied for about 400 years by members of the Sinagua culture who were engaged in agriculture and part of extensive trade networks in the region. Being perched on top of a hill provided visibility and defense, and the village housed people in an area that would not have made for good farming. Instead, the broad floodplains of the Verde River stretching out below the pueblo were reserved for cultivation. The setting of the pueblo, with commanding views over the valley yet nestled within the temperate Verde River Valley and surrounded by high mountains, was quite an appealing location. It’s easy to understand how a community could thrive here for hundreds of years.

Our campsite for the week was at Dead Horse Ranch State Park, an Arizona state park situated along the Verde River. We really liked the features of this park. We were able to hike out into the backcountry directly from our campsite, yet the park itself is a stone’s throw from the downtown area of the neighboring community. We could see the lights of Cottonwood at night from our campsite, while still enjoying long views across the valley to the snow-covered mountains. For us, it was a perfect balance. 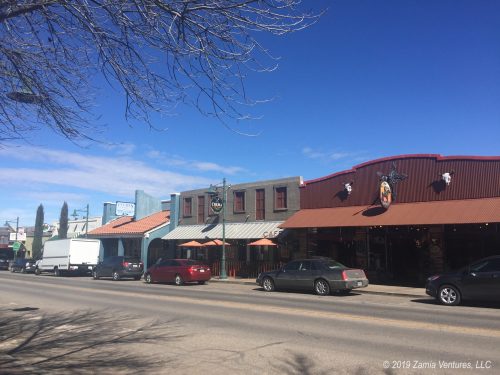 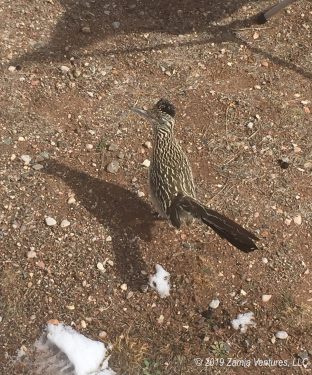 Roadrunner in our campsite

During our visit we spent some time wandering through Old Cottonwood, which is charming but, at three blocks long, is also incredibly tiny. It was fun to check out the very eclectic shops and galleries, and I purchased a cool pair of copper earrings to commemorate our stay in the Copper State. One of the surprises of Cottonwood is the proliferation of wine tasting rooms. For some reason, many Arizona wineries — which mostly grow their grapes in Cochise County in the highlands of far southeastern Arizona — have tasting rooms in Cottonwood. We tried a few flights at the tasting room of Pillsbury Wine Company, which has won quite a few awards in the not-terribly-competitive landscape of Arizona wines. Perhaps not surprisingly, the wines grown in Arizona’s high desert reminded us of Spanish and Portuguese products like vinho verde, tempranillo, and riojo, even though the Arizona vintners use different varietals. While the wines weren’t the greatest we’ve ever tasted, they were enjoyable, and at $12 for a flight of 5 wines the tasting prices were a far cry from the extortionate prices we encountered in Napa. It made for a fun afternoon activity.

This region of Arizona is famous for its hiking, highlighted by mesas composed of colorful rock. The lingering slush made conditions a little challenging, but the warm sunny days made us eager to get outside to explore. We love camping in a spot where we can access trails directly from our campsite, avoiding the need to drive to a trailhead and find parking. Dead Horse Ranch offers trails in a variety of lengths, and we found one right in our sweet spot of 6-8 miles. We enjoyed the Lime Kiln / Thumper / Raptor Trail so much that we hiked it twice during our stay. The first time we struggled a bit with wet, slick clay caused by the melting snow, but the remaining snow drifts made for really interesting visual patterns. 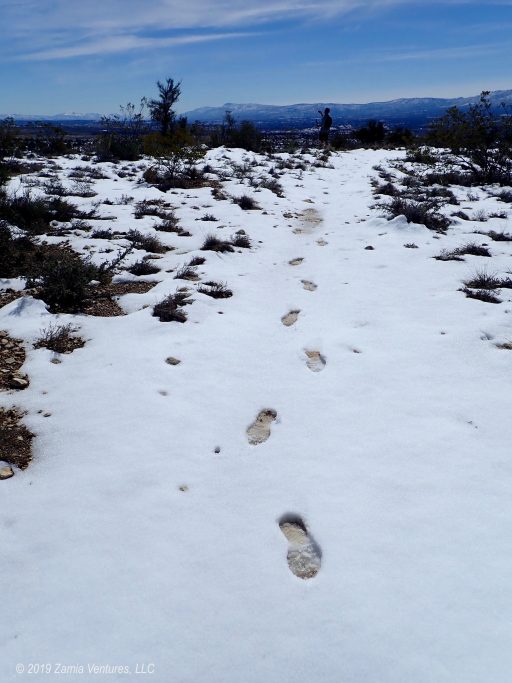 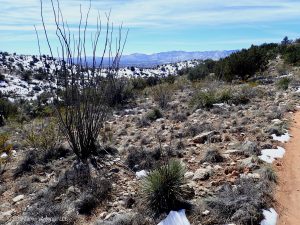 A few ocotillo in this area 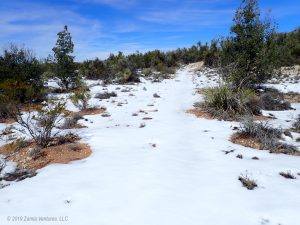 Where is the trail?? 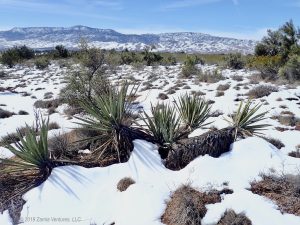 Our other major hiking endeavor was a joint effort with our friends Kevin and Laura of Chapter 3 Travels. They were also camping at Dead Horse Ranch, and during the overlap in our stays we made a trip to Sedona together to explore the Devil’s Bridge formation via the Chuckwagon Trail. This was a popular trail, and for good reason. The trail wound through scenic piney forests, while the views of the red rock formations were just spectacular. I was able to play the role of token short person, hustling along as my three tall companions strode effortlessly down the trail. Most important, our afternoon together was a great chance to get to know Kevin and Laura better while pursuing an activity we both love. Making friends on the road has been one of most pleasant surprises of our journeys, and this was a perfect example. Happily for all of us, the weather steadily improved over the course of the week and after arriving to snow we enjoyed plenty of warm, sunny days by the end of our stay in Cottonwood. 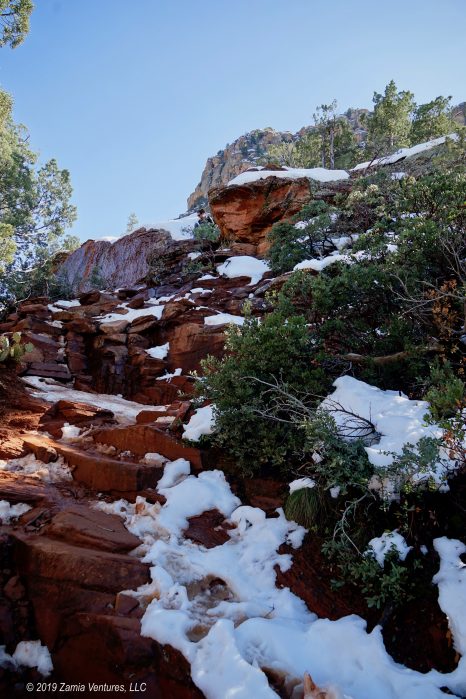 Some slush on the higher reaches of the trail 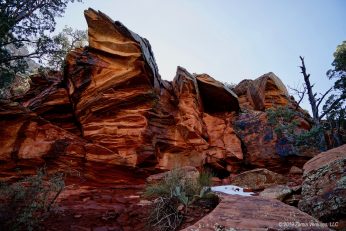 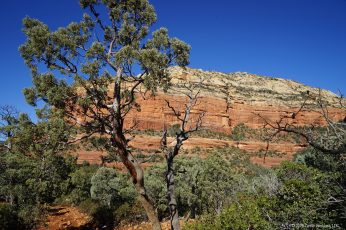 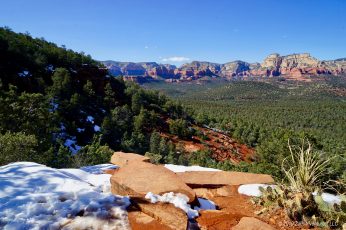 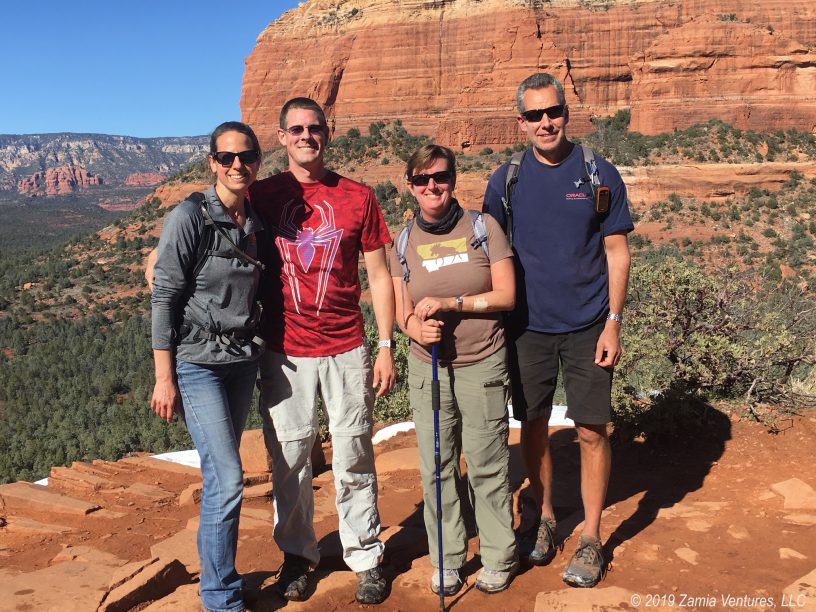 One of these people has legs like a dachshund