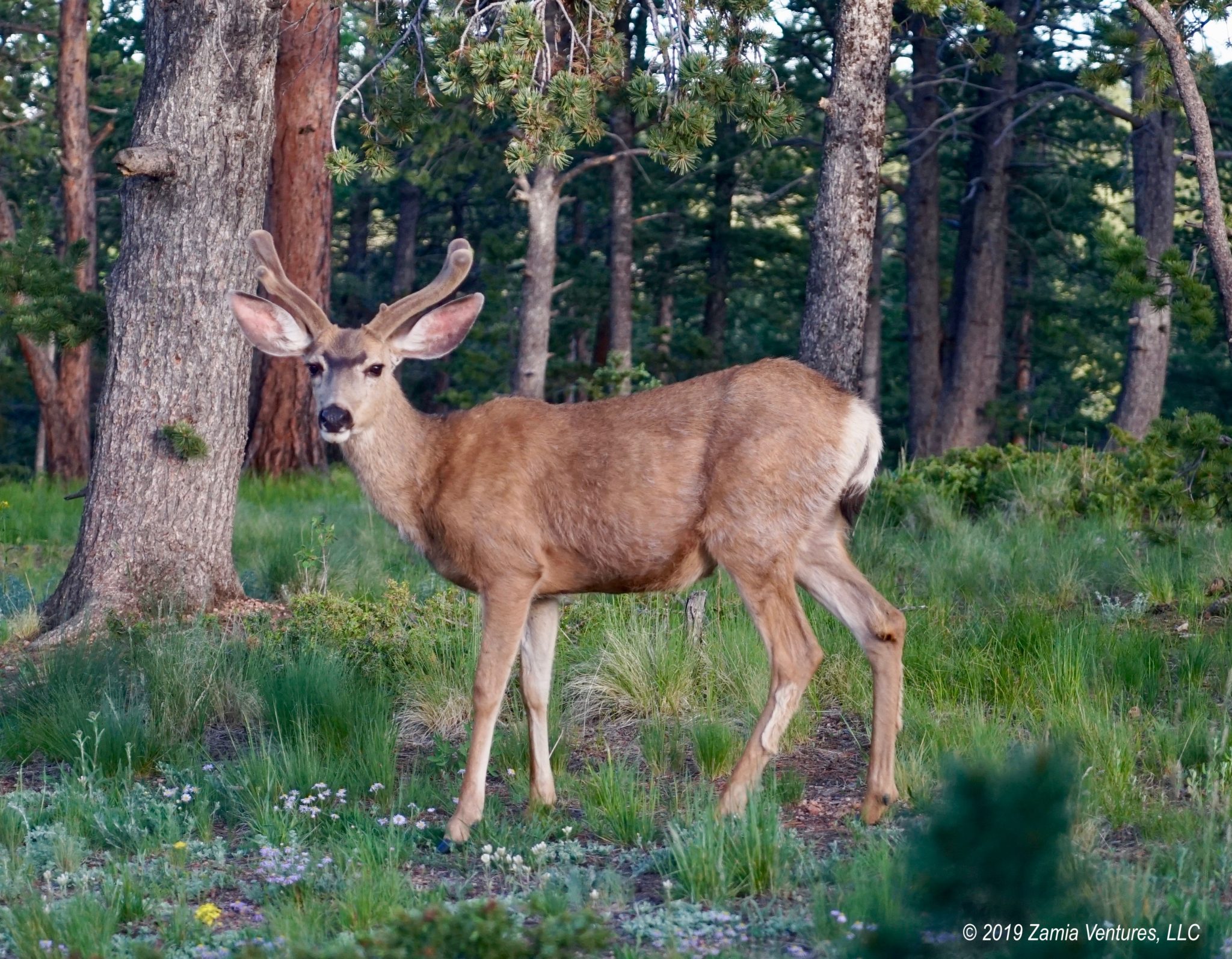 As clueless flatlanders, we really didn’t pay too much attention to altitude when planning our summer sojourn in Colorado. We generally knew that higher elevation would mean cooler temperatures, but didn’t examine the idea much more closely. We were surprised to find that Pagosa Springs was at over 7,000 fees of elevation, but since we’ve been at or above 5,000 feet since early April we were already pretty well acclimated when we started our Habitat build. When selecting our latest camping site, we were blissfully unaware that we would be hitting our highest altitude yet.

We picked Mueller State Park as a destination based on the great reviews on Campendium, the opportunity to hike right in the park, and the relative proximity to Colorado Springs. We completely ignored the fact that the park sits at over 9,300 feet. In this case at least, our lack of awareness didn’t hurt us — while Colorado Springs was sweltering we enjoyed temperate weather, and we ended up absolutely loving our campsite and the entire park. 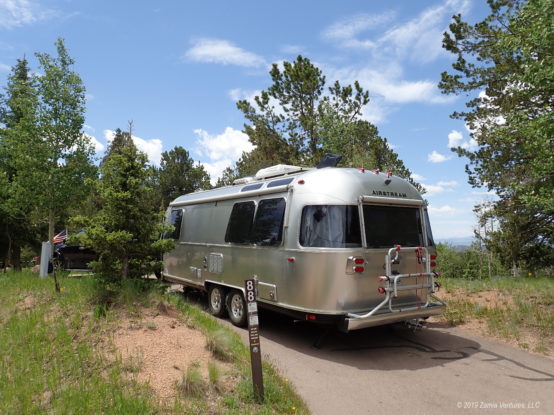 Large campsite with a view 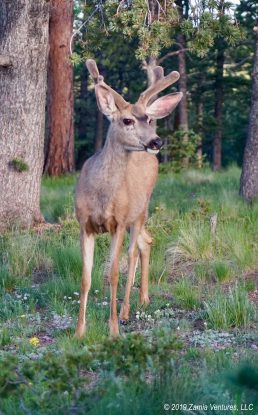 When a human walked by 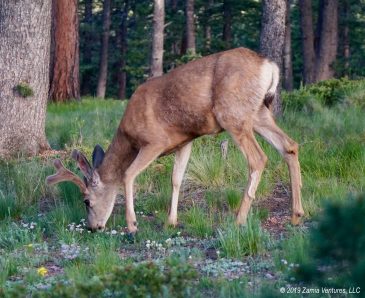 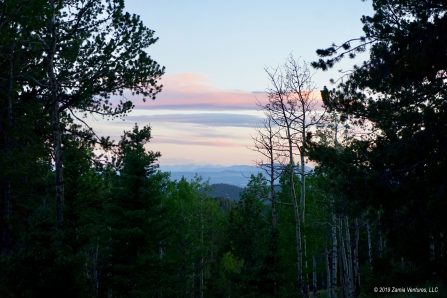 Evening view from our campsite

Situated on the west side of Pike’s Peak, Mueller State Park has over 50 miles of hiking trails, many with great views of the peak. The forested areas are dominated by Ponderosa pines and quaking aspens, while the meadows were full of wildflowers during our visit. Wildlife seems to be bountiful, judging by the deer that wandered into our campsite one morning and the near-constant visits we had from birds like woodpeckers and nuthatches. 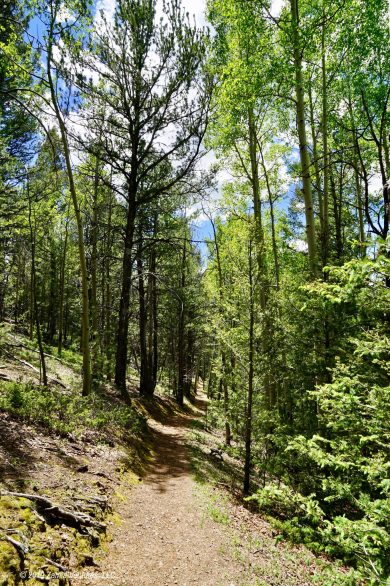 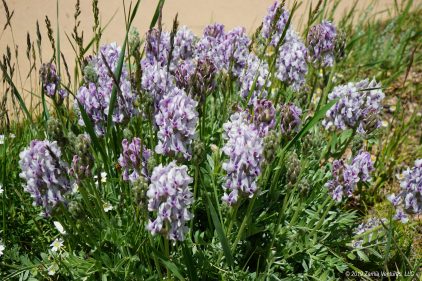 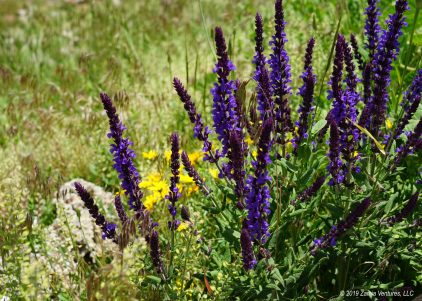 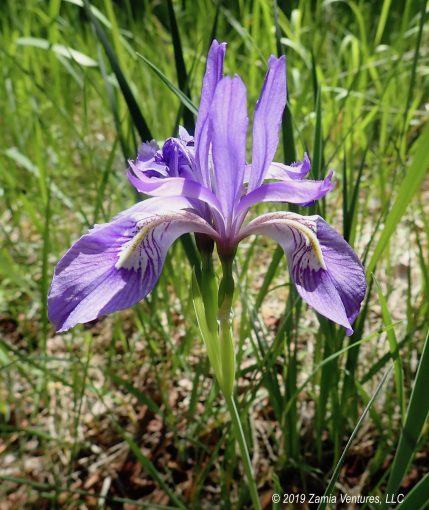 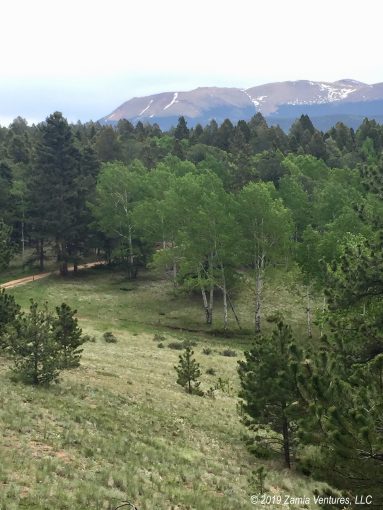 The campground is situated in the middle of the park, and the sites are very nicely spaced out, giving campers an unusually large amount of personal space. The campground roads were in great shape. The campsites all had nice level spots in the middle even if entries were sloped. The bathhouse was modern and spotless. There were multiple ranger-led programs every day, and trails were well marked with easy-to-read signs that looked new. Overall, we felt the park delivered on value, despite being relatively expensive for a public park ($36/night camping fee + $8/day vehicle fee, for a total of $44/night). As much as we love national park campgrounds, several that we have visited are in serious need of TLC and are not the best presentation of our national treasures. It was a pleasure to visit a public park that has both natural beauty and excellent camping amenities; these days we seem to find more state parks fitting this description than the national parks. 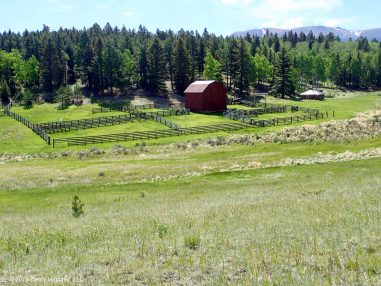 Historic ranch in the park 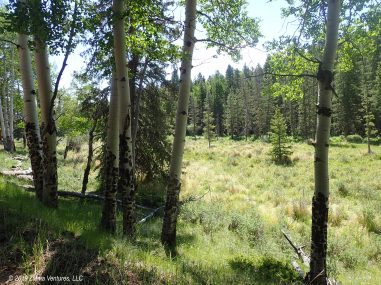 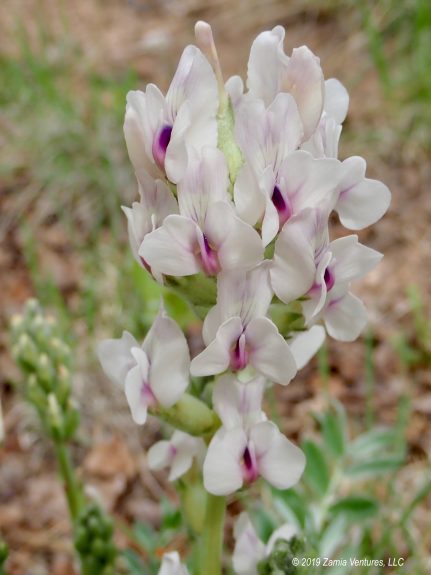 At Mueller the trails were interconnected in a dense web, so it was easy to select an appropriate adventure. Depending on how much time we wanted to spend, we took hikes ranging from 1 to 7 miles, and for the most part we walked to the trailheads directly from our campsite. Most of the terrain covered rolling hills, with no major changes in elevation. That’s fine with me, because when I am starting a hike at over 9,000 feet, I am really not looking for thousands of feet in elevation gain. Our only quibble with the hikes is that they all end on an uphill section, since the campground and the trailheads are located along the top of a ridge. But I suppose that’s a small price to pay for great views from the campsites!

A short 10 mile drive from the campground brought us to the Florissant Fossil Beds National Monument, which provided an opportunity to, as the NPS says, “experience the fossil history of Colorado.” The fossil beds are a rich resource of materials from the late Eocene Epoch, approximately 34 million years ago, so the dinosaurs were long gone, the age of mammals had begun, and many of the flora and fauna were distant relatives of species we still have today. At the time Florissant had a temperate, subtropical climate and a dense forest was filled with many different types of trees ranging from giant redwoods to oaks, maples, beech, elm, and mahogany. The forest environment supported a wide variety of insects and mammals. Through sheer luck, a series of volcanic eruptions generated ash flows that buried portions of the forest, including encasing the bottoms of redwoods in mineralized ash that turned them into petrified stumps. Also preserved by ash settling in the bottom of a lake were numerous fossils of fish, insects, and plant material. The result is an unusually good window into the ecosystem that existed here in the late Eocene, with world-leading collections of certain items like fossilized butterflies. 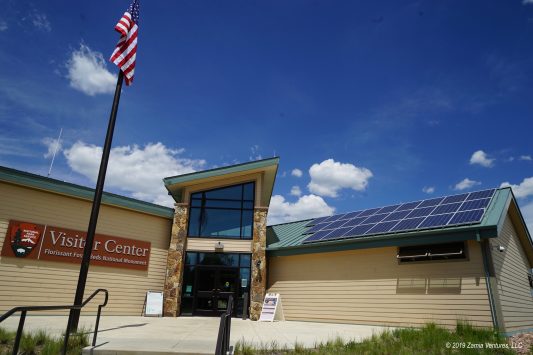 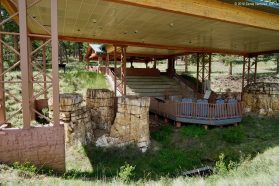 So many interesting displays

As usual, the NPS visitor center was great. The relatively new building featured many energy efficient features along with an impressive solar panel array. Inside, there were several rooms of very well done exhibits, with our favorite being profiles of various researchers who made important contributions through their work at Florissant. Introducing the scientists as people first, then providing a window into their work was cool, and each person’s work highlighted different aspects of how 100 years of research built an understanding of the whole ecosystem at Florissant. I am not sure I would have the patience to devote a lifetime of work to studying pollen grains in the fossil record here, but I am sure glad that Dr. Estella Leopold did! The visitor center also had a nice collection of insect and plant fossils on display, with information about how the species here dealt with the change of the climate to a cooler mountain environment (hint: either by going extinct or becoming established in more suitable places). There were not quite as many fossils on display as we saw at the visitor center for John Day Fossil Beds in Oregon, but we also didn’t have to visit a creepy and desolate place to see these artifacts.

Walking around the site was decidedly less interesting than studying the items in the visitor center. Many of the largest petrified trees were dismembered by tourists visiting the site in the late 19th and early 20th centuries; the relic called “Big Stump” actually has several broken saw blades embedded in the rock. The remaining redwood stumps are circled by puny little fences that hardly seem worth the effort given the minimal remains visible above the surface. The views of the surrounding mountains and a historic homestead within the park boundaries were some of the more compelling sights along the “Petrified Forest Loop.” 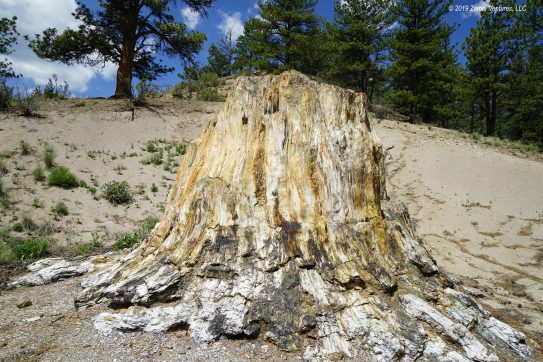 The Big Stump (embedded saws toward the top left) 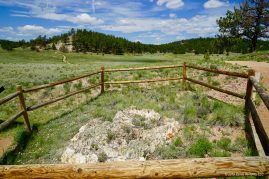 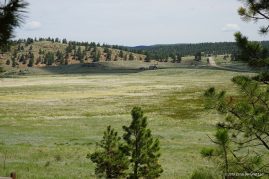 Historic homestead is now part of the park

Garden of the Gods

We took one day to visit the world-famous Garden of the Gods, a free city park that is arguably the crown jewel of Colorado Springs. Even though we visited on a weekday, it was still a total zoo. The visitor center was absolutely packed, and there was bumper-to-bumper traffic on the scenic drive through the park. The paved sidewalks were jammed with people of all ages from babies in strollers to the elderly. Of course, just like at many other popular parks we have visited, the moment we turned onto the more rigorous trails around the park the number of other hikers dropped dramatically. Our 4.7-mile hike around the park perimeter and back through the center of the action (on the Bretag, Palmer, and Scotsmen Trails) gave us great views of the iconic red sandstone formations from a distance as well as up-close encounters. Our hike also featured blazing sun and temperatures reaching into the 90s, so much water was consumed. 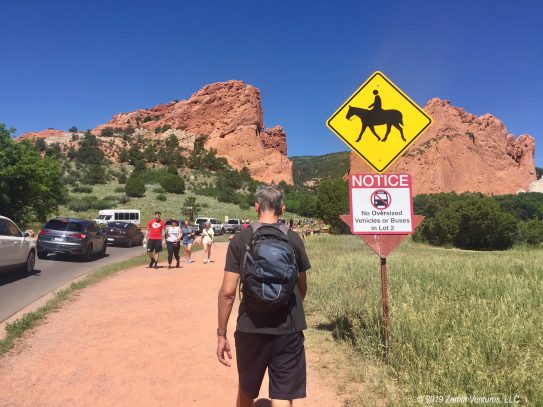 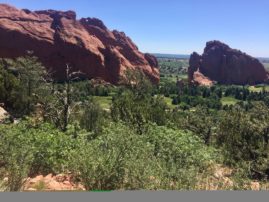 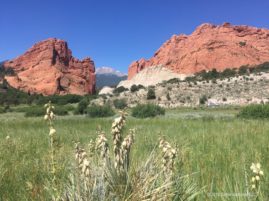 Pikes Peak seen through the rocks 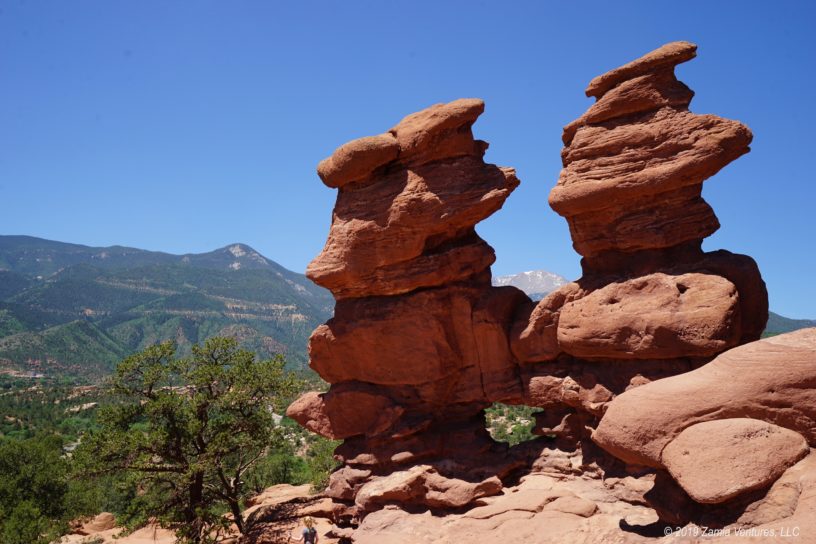 While we enjoyed our hike through Garden of the Gods, after spending 6 weeks in southern Utah seeing much larger, much more spectacular geological features, the red rocks here were a little underwhelming. In retrospect, considering the relatively long drive and the crowds we encountered, we probably would have been just as happy to take another hike from our campsite. But at least we can say we’ve experienced one of the more interesting urban parks in America.

Our campsite was about an hour away from the commercial areas of Colorado Springs, but despite the long drive we made it a priority to spend a day there to do some shopping.

Charles Kuralt delighted in visiting quirky small towns as he traveled across America by RV, including unique retail establishments. We, on the other hand, really like going to chain stores. Full time RVing is a life of constant change, and it is such a relief to be able to walk into a store and know exactly what to expect. And as much as we have enjoyed the natural beauty of the rural Four Corners, we missed having access to the national chains we know and love, and we went sort of crazy with an entire day of shopping in Colorado Springs at places we mostly haven’t visited since we were in Tucson in February.

The results of our retail hedonism included:

Our drive back to camp from Colorado Springs included a detour through the resort town of Manitou Springs, thanks to some road work on the main road. This tourist destination has apparently taken well to the legalization of recreational marijuana in Colorado, as several hotels in town advertised themselves as “420 and pet friendly” and having “Rocky Mountain High Smoking Rooms Available.”

One of the most interesting phenomena that we encountered from our day of shopping was the very visible evidence of change in air pressure when we brought our purchases up from Colorado Springs (elevation 6,000 feet) to our campground at Mueller (elevation 9,000 feet). Everything packed in a sealed bag turned into a super-puffy pillow, with seemingly major pressure from within! Needless to say, we did not expect this, and spent several days gingerly moving these items around hoping they would not explode, because we are clueless flatlanders. 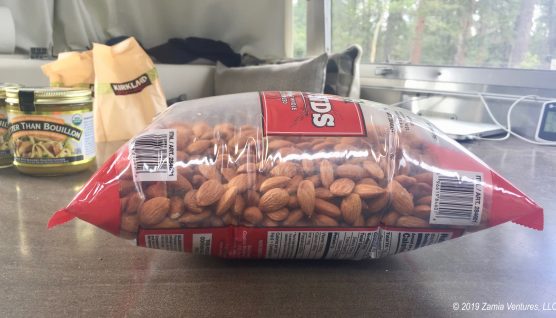 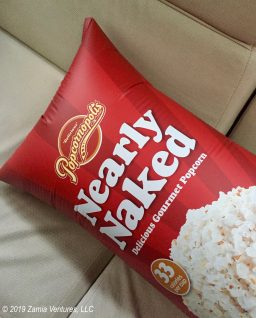 Next: We head to Rocky Mountain National Park for more mountain experiences, except that we will camp at “only” 8,000 feet.