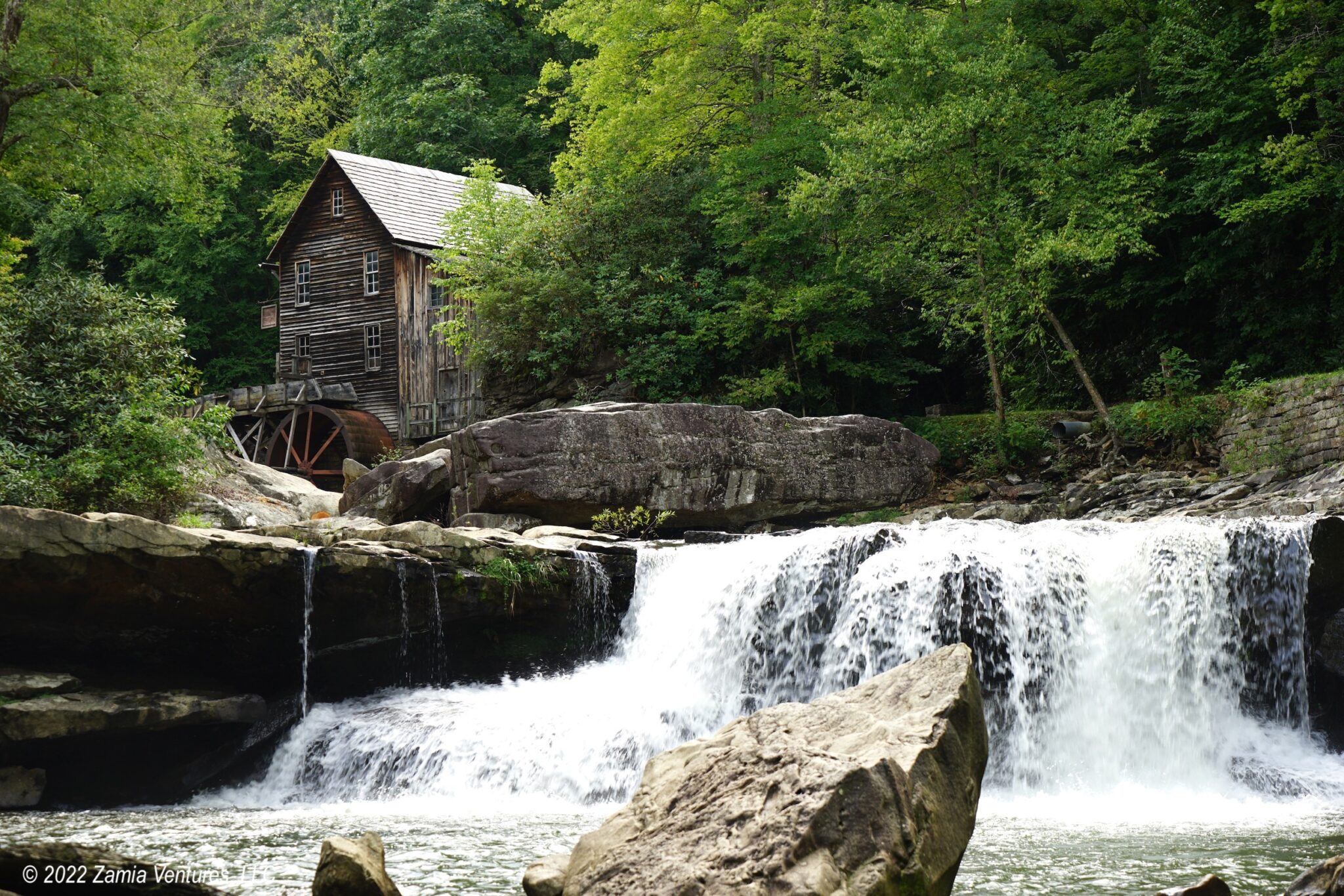 Our stop in West Virginia included a fun milestone: we visited our 100th National Park Service unit! NPS units include more than just parks — they include historic sites, monuments, battlefields, and more — but in this case our 100th was also America’s newest national park: the New River Gorge. But first, let’s review how we got there.

We knew we wanted to travel from Ann Arbor to southern West Virginia in two hops, and we initially considered a route that would take us past Jackson Center, Ohio (with a stop at the Airstream museum and history center!) with a stay somewhere south of Columbus. But that would mean our entry into the Appalachians would be directly against the grain of the mountains. The ridge lines run roughly southwest to northeast, and coming in from the northwest would mean going up and then down over numerous ridges. We’ve driven the rig on plenty of challenging routes, ranging from the PCH to 10,000+ foot mountain passes in Colorado, but there’s no reason to make things harder than necessary.

As a result we decided to position ourselves for a relatively easy drive into the Appalachians, maximizing our time on well-engineered interstate highways, with an entry from the north. We situated ourselves in eastern Ohio, between Columbus and Pittsburgh, with a short two-night stay at Salt Fork State Park. Once we got around Toledo, driving across Ohio was a pleasant combination of flat, straight rural roads and patriotic small towns. It was fun spotting a few people driving horse-and-buggy rigs when we passed through some Amish Country. 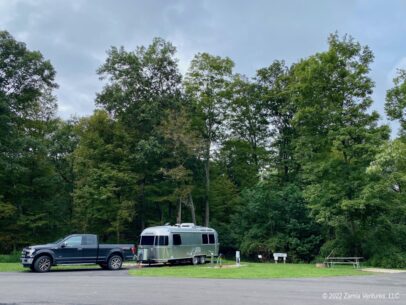 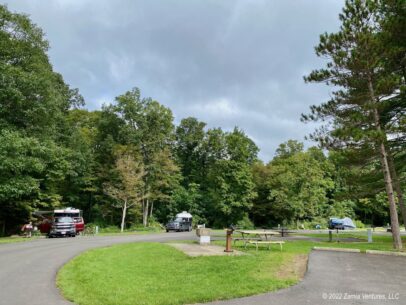 To top it off, Salt Fork was delightful. It is Ohio’s largest state park, with multiple campgrounds, a large reservoir, hiking trails, beaches, a marina, a lodge and conference center, and more. After our disappointing stays in Michigan state parks, it was nice to be reminded why we normally love state parks. Our particular campground had just a dozen sites that were nicely spaced out, with flawless paved pads and our own bathhouse. And for a comparable fee to what we paid in Michigan for just electric service, we also got full hookups! During our one full day in the park we did laundry at the clean and modern camper laundry facilities, flushed out our holding tanks, and stretched our legs on a short hiking trail that departed from our camping loop. Our only regret is that we didn’t even scratch the surface of what the park offers.

Typically when we tow more than 200 miles in one day, we split the driving duties. In this case, Ken drove 170 miles down I77 from Cambridge, Ohio past Charleston, WV, while I drove the last 50 miles to the campground. This turned out to be a pretty even split. Why? Because my portion of the drive included this:

At one point during this section I rounded a bend, saw a sign that said “Speed Limit 55 MPH,” and literally laughed out loud. I doubt I went over 45 at any point during this section, and I know that I crawled through some of the hairpin turns at a mere 17 MPH. But the road quality was good — the road widened in turns so we never had to cross the center line — and there were plenty of signs warning about upcoming turns and grade. With a healthy dose of patience and concentration it was completely manageable for us to tow the rig to the state park.

And we were glad we made the effort, because Babcock State Park turned out to be a real gem. We picked a site in an all-electric loop that seemed well suited for larger rigs. While there was no foliage between the sites, once again the generous site separation — and the fact that there were only 11 sites on our loop — made for a pleasant and peaceful experience. The loveliest camp sites in the park were the primitive sites near the bathhouse, situated under towering trees and scattered along rolling hills. The bathhouse was nicely modern and immaculately clean, and when we had a problem with our 30 amp electrical service cutting out, the park staff fixed it the same day we notified them. The mountain-top location made AT&T service a little sketchy, though not completely unusable, but the park provides free wifi with repeaters mounted all over the place for good coverage. The park wifi offered plenty of bandwidth to stream videos and Facetime. These are some of the elements that make for a great camping experience, and that’s without even exploring the attractions of the park. 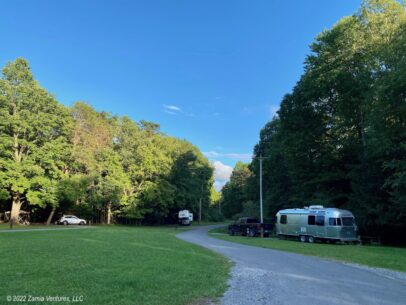 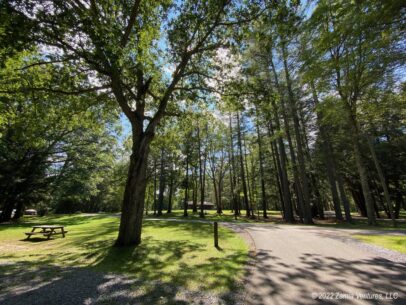 One of the most recognizable features of the park is the historic grist mill that sits alongside a small waterway called Glade Creek, which has been featured in countless photos. The state even has a selfie station set up for people to prop their phones and grab insta-worthy pics of themselves with the grist mill in the background. But the park also has miles and miles of hiking trails. We expanded on the main loop (Skyline-Rocky-Narrow Gauge) by adding a few side spurs and overlooks to reach over 7 miles. The typical Appalachian terrain in the park included tall evergreen and deciduous trees with an under story of rhododendrons, granite boulders covered in moss and lichens, occasional outlooks over tree-covered ridges, and ravines with rocky streams at their bottom. The trail we hiked included all of these, as well as a really challenging CCC-built “stairway” of flat rocks that went straight down the side of the mountain. We’re talking about 500 feet of elevation change over only a third of a mile. We planned our loop to go down that part, and it was still a killer. And with persistent wet weather and plenty of slippery rocks, our hiking poles were a true necessity for the first time all summer. We had a blast! 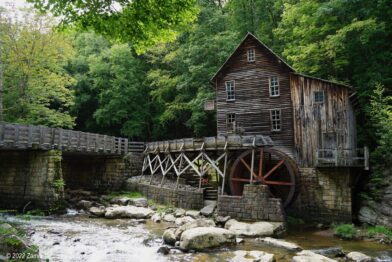 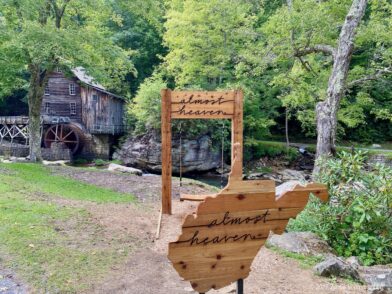 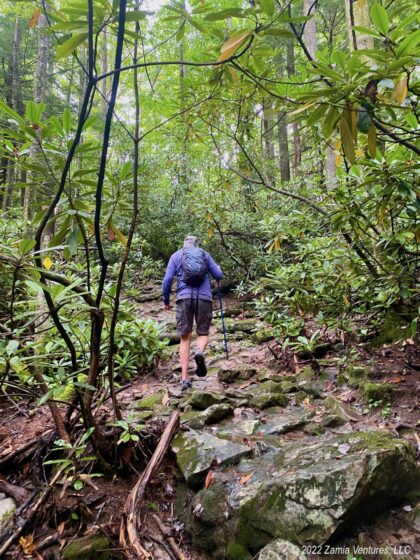 Up the Skyline Trail 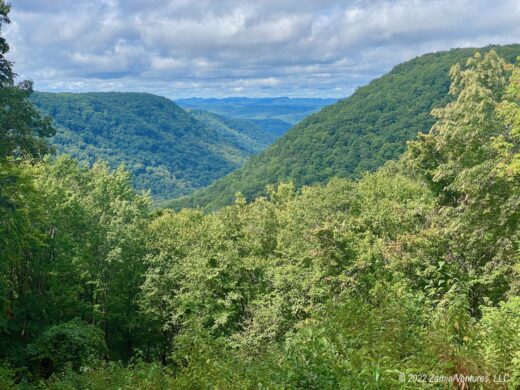 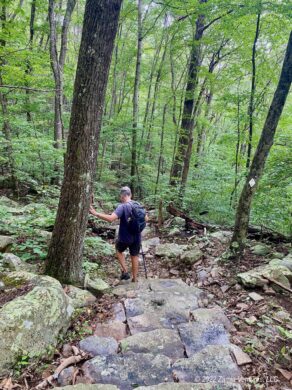 Down the Rocky Trail 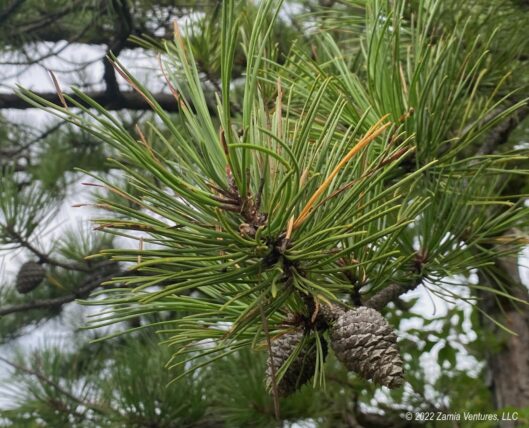 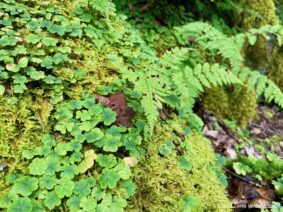 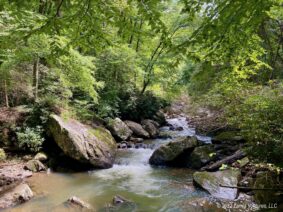 Our main reason for selecting Babcock was its location adjacent to the New River Gorge. Despite the name, the New River is actually one of the oldest rivers in the world, starting in North Carolina’s Blue Ridge and flowing north across Virginia and West Virginia. The age of the river means that it has had time to erode a gorge that reaches 1,000 feet of depth in some places. The unusual direction of the river also means it cuts across and links many different ecosystems, while the steep sides of the gorge offer a variety of microclimates packed within a relatively small area.

The New River Gorge was one of the first places where West Virginia’s vast coal resources were recognized, since the river’s erosion revealed rich seams that were high in energy content and low in impurities. The forbidding terrain made resource extraction impossible until the Chesapeake & Ohio Railway completed a line through the gorge in 1873. What followed was a huge influx of mining operations and miners, with over 60 different coal towns strung out along the narrow banks of the river. The seams were tapped out by 1950, so it was time for the area to follow the development path we’ve been seeing all summer: take land from native inhabitants, extract natural resources until exhausted, then pivot to tourism. The scenery (which was visible again once the mines and coke plants closed), the biodiversity, and especially the rock climbing and white water rafting made the New River a perfect destination for ecotourism. A 53-mile swath of the river was designated as a national recreation area in 1978, with about 10% of that federal land upgraded to national park status in 2021.

The interpretive displays at the Canyon Rim Visitor Center cover the social and cultural history of the coal mining communities that once dotted the landscape, while also highlighting the ecological features of the gorge. The visitor center has several different nearby viewpoints to observe the New River Gorge Bridge, which was the world’s largest single-span arch bridge when it opened in 1977. We enjoyed seeing the bridge, and while in that area of the park we also hiked the nearby Endless Wall Trail as an out-and-back from one of the trailhead parking lots. We made plenty of stops at numerous observation points, even watching a few whitewater rafting groups negotiate the rapids far below us as turkey vultures used the warming air columns to soar upward. 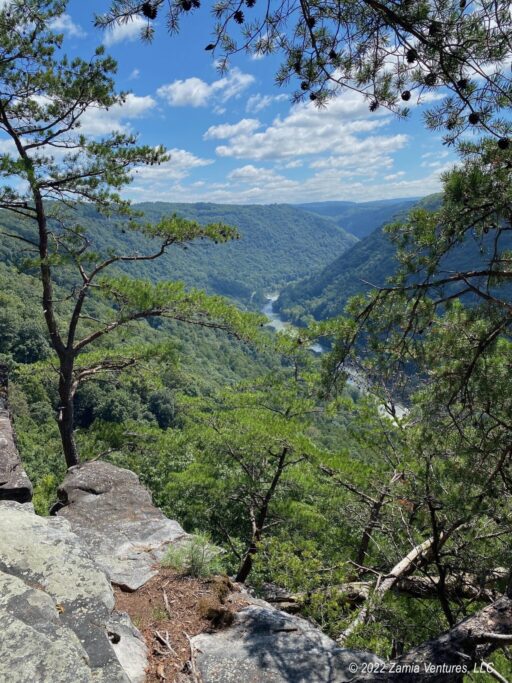 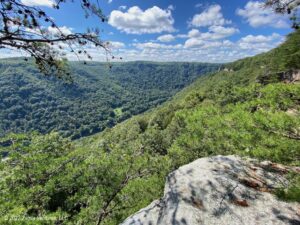 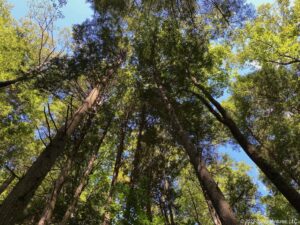 Tall trees along the trail 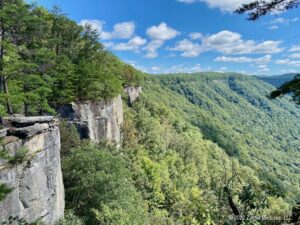 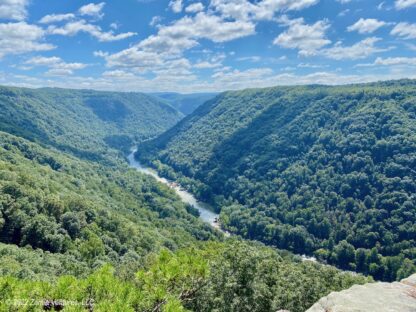 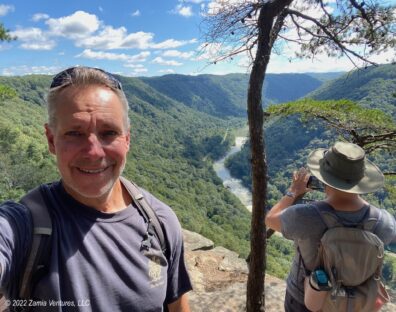 While the scenery here at the New River Gorge was compelling, our explorations were limited by several days of persistent rain. If we had more days with favorable weather, we could have done plenty more interesting hikes, explored the remains of several mining towns, or even tried our hand at rafting. The possibilities are nearly endless.

It was both fun and somewhat irrelevant that this was our 100th NPS site visit. We are not exactly checking parks off a list with the idea of completing the roster; with over 420 NPS units we are less than 25% of the way complete and plenty of the sites are difficult to reach or too lame to bother. Still, it’s nice to have a record of the many places we’ve visited that are considered to be important to our nation, for reasons of history, beauty, or otherwise. I was happy to celebrate the milestone by purchasing some “National Park Geek” gear. I mean, if the shoe fits…..

Next up: the journey south continues with a short stop in Asheville, NC.

6 thoughts on “We Brake for Brown Signs: Hitting 100 in West Virginia”