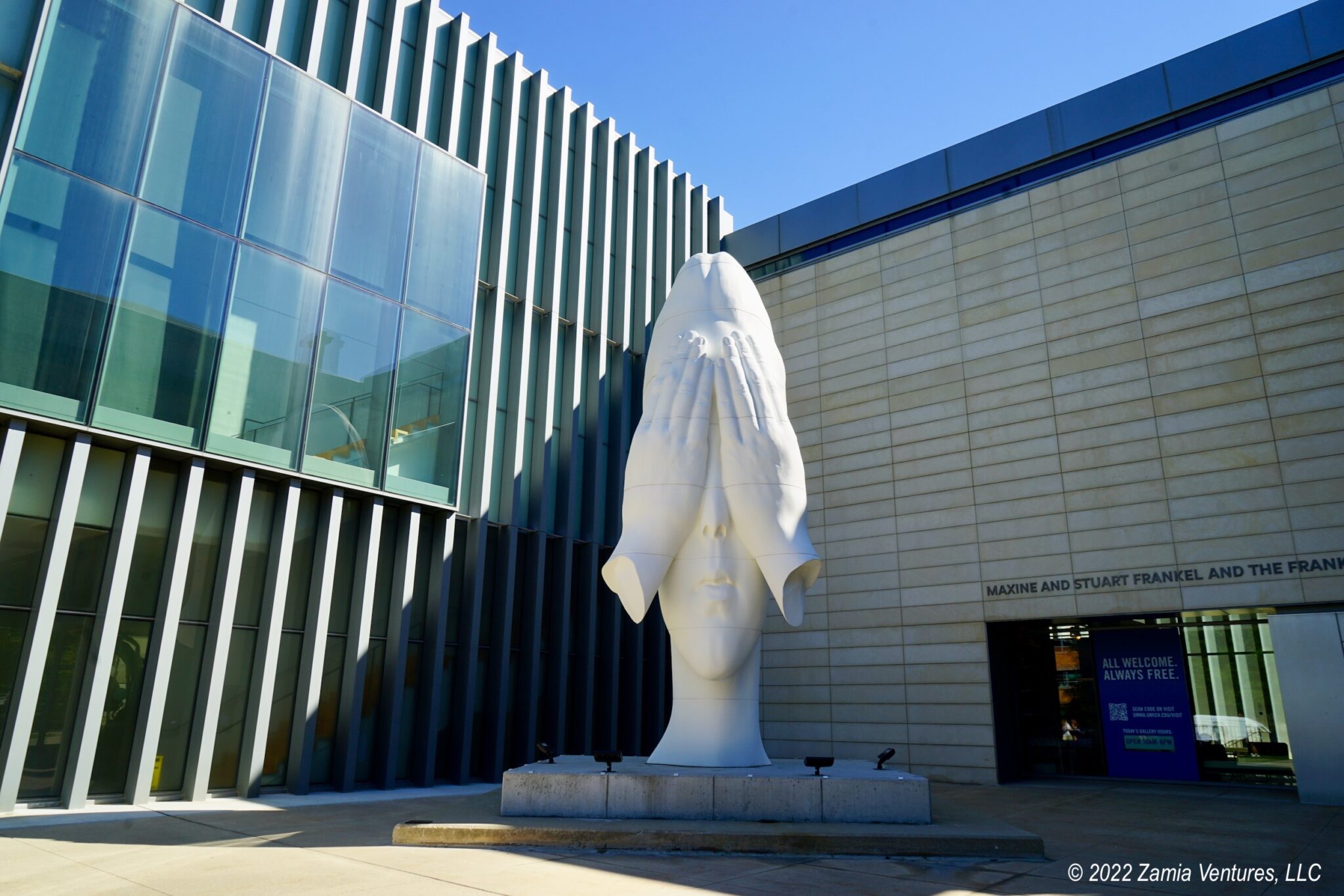 We finished our five-week exploration of Michigan with a stay in southeast Michigan near Ann Arbor, where we rode out the always-busy Labor Day weekend. Southeast Michigan, which includes both Detroit and Ann Arbor, is the most populous area of the state and has both the amenities and the traffic to prove it.

University of Michigan Museum of Art

High on our list of activities in Ann Arbor was the UM Museum of Art, which is free to the public. Walking from the municipal parking garage to the museum gave us the chance to see a number of buildings on the UM campus, and to wonder why so many people who look like 12 year olds are attending college these days. The art museum is contained in a building with two distinct parts: a historic structure with classical lines, and an ultra-modern addition that creates a vivid contrast. 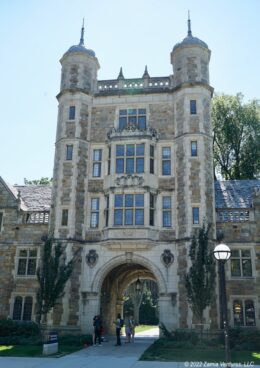 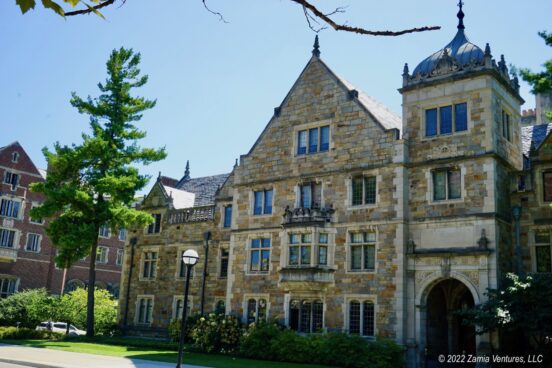 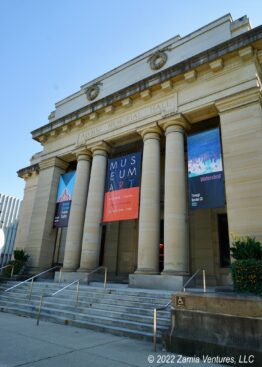 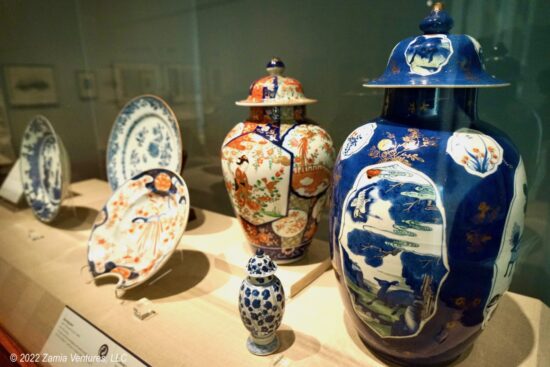 Unlike the Chazen Museum we visited at the University of Madison, the U Mich museum does not display a comprehensive collection that would perfectly accompany any art history survey course. Instead, its strength is in its thought-provoking special exhibits and limited collections organized around major themes, which included artworks from historical periods ranging from the Middle Ages through contemporary art. On the first floor the museum currently features an exhibit called “You Are Here” which is a celebration of the museum reopening after COVID shut-downs. All the works have textures, materials, or other qualities that should be seen in person to be appreciated —  including some art furniture that’s meant to be sat upon. 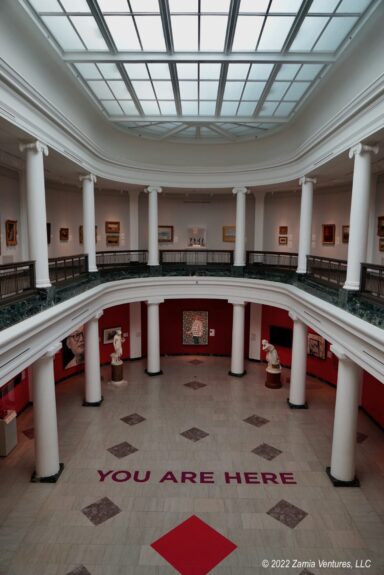 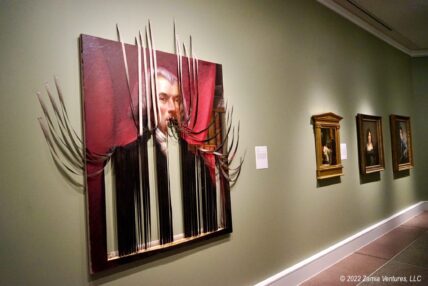 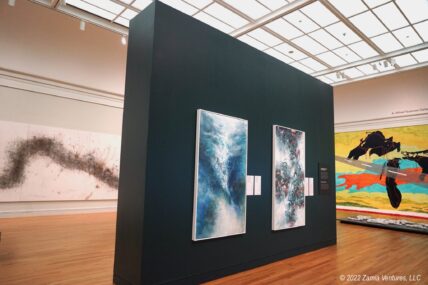 The other exhibits examined equally interesting themes and ideas. A nearby exhibit focused on the legacy of slavery and colonialism reinterprets a number of 18th and 19th century European and American paintings with greater nuance, and juxtaposes them with modern pieces, but also raises the interesting question of whether, for example, the Roman Empire was a colonial power. In an exhibit of African art, ancient Egyptian pieces are presented side by side with more modern African works, explicitly rejecting the usual museum practice of grouping ancient Egypt with ancient European cultures. An exhibit called Watershed brings together contemporary pieces united around social, political, and environmental stories of the Great Lakes, such as the Flint water crisis. There were several interesting exhibits highlighting Japanese, Korean, and Chinese arts as well. While the museum displays few masterworks, the outstanding curation of the exhibits made this a very engaging way to spend a day.

We also made time to visit U Mich’s Matthaei Botanical Garden, located near the University’s Campus Farm. Late in the season, sunflowers and all manner of wildflowers reached staggering heights, while spring bloomers had turned to seed. Surprisingly, we really enjoyed the conservatory with its three different climate zones: tropical, temperate, and desert. While many of the tropical and temperate plants were species familiar to us from our home landscaping, some interesting specimens like a blooming cacao  (chocolate) and Venus fly traps were fun to examine. And the variety of succulents in the desert environment was impressive, though sadly lacking any ocotillo or palo verde. It’s always challenging to host larger species within the confines of a conservatory, which is why tropical greenhouse environments so seldom match the grandeur of the real thing. 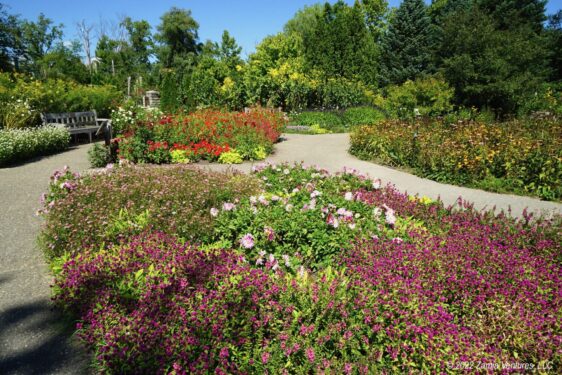 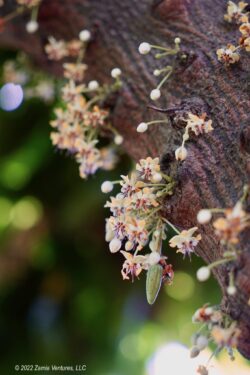 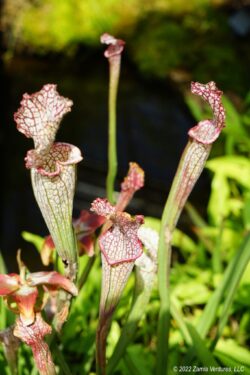 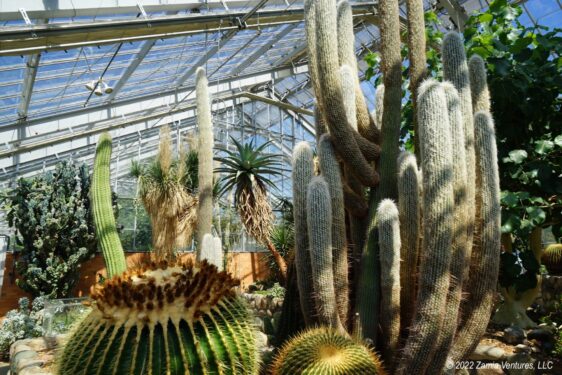 The other standout at the Matthaei was the large bonsai collection of over 75 plants, many of them centuries old but some featuring bonsai versions of local Michigan trees like larches and pines. It was particularly interesting to see some plants displayed with their wire armatures in place to train the branches. I never realized how much sculpting goes into creating these artistic botanical displays. 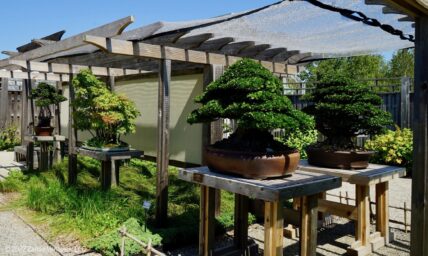 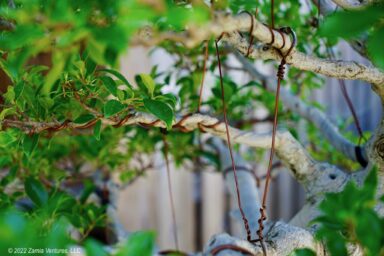 One day we made the hour-long drive to Dearborn to visit Ford Motor Company’s Rouge Factory. When it was built in 1917, the Rouge complex was the largest integrated factory in the world, bringing in raw materials on one side and continuously spitting vehicles out the other end. It included its own steel plant and glass works, among other things, to make components needed for Ford vehicles. Iconic products manufactured in Dearborn range from the Model A to more contemporary vehicles like the Fairlane, Thunderbird, and Mustang. Today the Dearborn assembly plant manufacturers F150 pickup trucks just like ours, though our truck came from the Kansas City assembly plant. 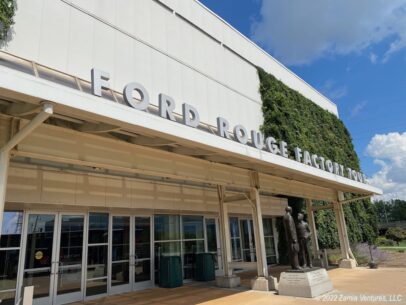 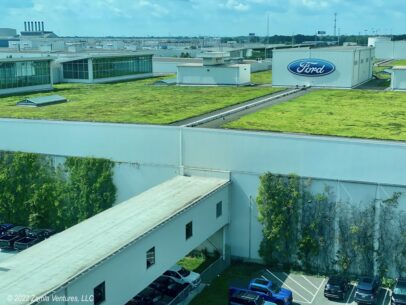 The tour consists of 5 “stations” including two promotional films featuring lots of triumphant music and three stops that can be toured at your own pace. The Legacy Gallery is a mini-museum with a half-dozen examples of the vehicles manufactured at the Rouge, as well as examples of the unfinished chassis, motor, and drive train of the regular F150 along with the new all-electric F150 Lightning. The two most compelling stations are the rooftop observation deck and the factory itself. From the rooftop, visitors can see the giant living (“green”) roof that blankets the facility in sedum, but also see the other structures in the distance that make up this vast complex: the paint shops, steel fabrication buildings, administrative offices, and other elements. 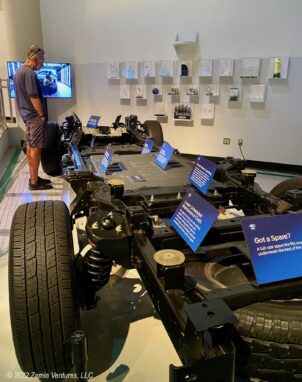 By far the most interesting part of the tour was the assembly plant. In contrast to our visit to the Toyota factory in Georgetown Kentucky, where we had a guided tram tour down on the factory floor, here we were able to view all the activity from catwalks running around the perimeter of the factory. From our prior auto factory visit, we were prepared for the sensory overload of seeing vehicles and parts (cabs, doors, truck boxes) mounted on assembly lines in constant motion, traveling in opposite directions and in various states of fabrication. Our favorite thing about the factory “tour” is that it was self-paced, so we could stand in one spot as long as we wanted, observing specific steps in the assembly process. We were particularly interested in the fully robotic marriage of the assembled cabs and boxes, and in the many, many steps required to build our seemingly-simple tailgate. I think that our experience was made much richer because of our prior auto factory visit (which explained the overall process of auto manufacturing) and because we own the product (so we have an idea what function those various little gadgets and doohickeys serve). There was very little informational signage for the uninitiated.

The main difference we observed between Toyota and Ford is the relative absence of automation, or to put it differently, the sheer number of people that were on the factory floor. At Toyota, trays of parts are delivered to workstations by autonomous little electric mules. At this factory, humans with forklifts and push-carts were bringing in the parts and stocking the workstations. And there were plenty of functions that looked like they could be made more efficient and more user-friendly for the workers by adding supportive robots instead of extra humans. It’s certainly possible that Ford chooses to show a human-intensive part of the line to highlight the partnership with the UAW that’s touted in the intro film, and that other areas of the line are far more automated. But for a “state of the art” factory that was built just 20 years ago, the puny amount of robots was quite a surprise. 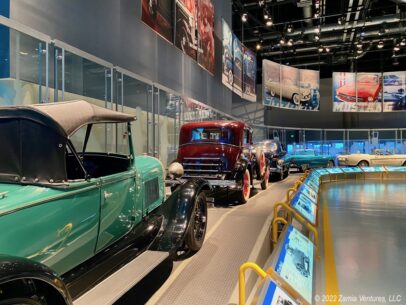 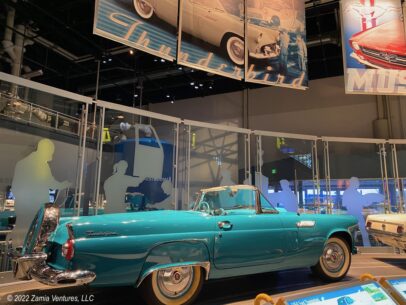 I also feel compelled to comment on the pricing structure of this tour. It was $22 per person for, essentially, a chance to peek into the factory after watching a few Ford advertisements. And despite Ford facilities in Dearborn having acres upon acres of parking, they also charged us $9 for parking on top of the tour fee. I note in a disapproving tone that the Toyota factory tour is complete free to guests because it is considered part of the marketing budget. And I also note that, at our formerly-local PGA event, the Honda Classic, the tournament waived the $10 parking fee for anyone driving a Honda vehicle. I always thought that was a little gimmicky, but it certainly highlights that the title sponsor appreciates their customers. So let me just reiterate that we drove to this tour in an F150 and yet paid a ridiculous parking charge. Ahem. On the other hand, the F150 is the best-selling vehicle in America, so Ford clearly doesn’t need me to give them advice on their marketing techniques.

We camped at the Brighton Recreation Area, located about 20 miles north of Ann Arbor. Like other Michigan state camping facilities, the sites at Bishop Lake Campground are bare dirt and grass rather than pavement or gravel. With little to define the sites, campers tend to spill out in every direction. But we had an end site, ensuring we would only have a neighbor on one side, and visiting late in the season meant that the campground was fairly empty on weeknights. On the weekends, especially the holiday weekend, it was the same circus we’ve encountered in every other Michigan state park. On various days we explored different walking and hiking trails around the park and watched lakes being enjoyed by people and birds alike. 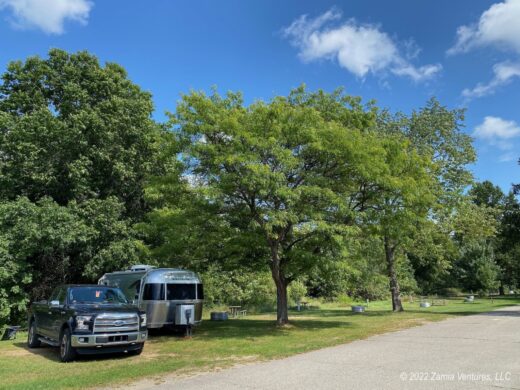 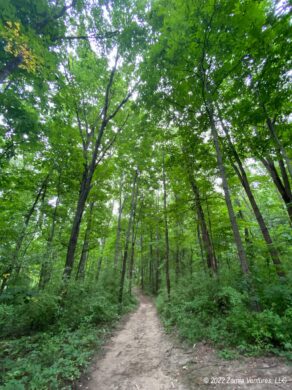 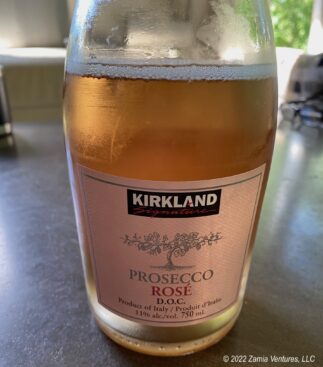 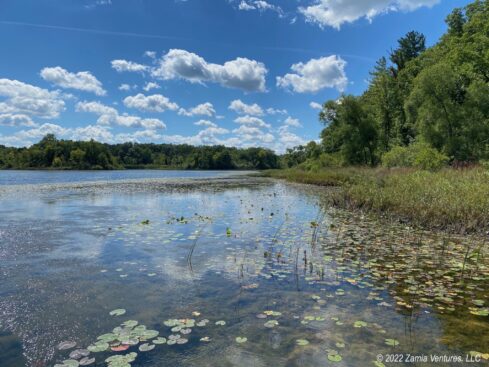 One weekend we were treated to a lovely happy hour at the home of Ken’s cousin Heather (technically first cousin once removed) and her husband Andrew. We are grateful they were able to make time to host us in spite of having busy careers and two active young boys; it was great to catch up with family. The town of Brighton near the campground has a few blocks of retail and restaurants in a cute downtown area, surrounded by all the normal shopping opportunities of suburban America. We took advantage of being 5 miles from a Costco to stock up on several freezer and nonperishable items, and also took care of mundane things like haircuts and some minor repairs. It’s hard to believe that in a few short weeks we will be back home, where visits to places like Home Depot, Costco, and Great Clips require a drive of several hours. We also celebrated our anniversary with a bottle of the finest bubbly (I kid) and an excellently grilled steak (not kidding).

Next: With Labor Day in the rear view mirror, we now point the rig towards home with a few stops along the way. First, we sprint south across Ohio and set our sights on visiting America’s newest national park, the New River Gorge.

Hot Nashville (and I Don’t Mean the Chicken)

The Artsy Community of Sheboygan