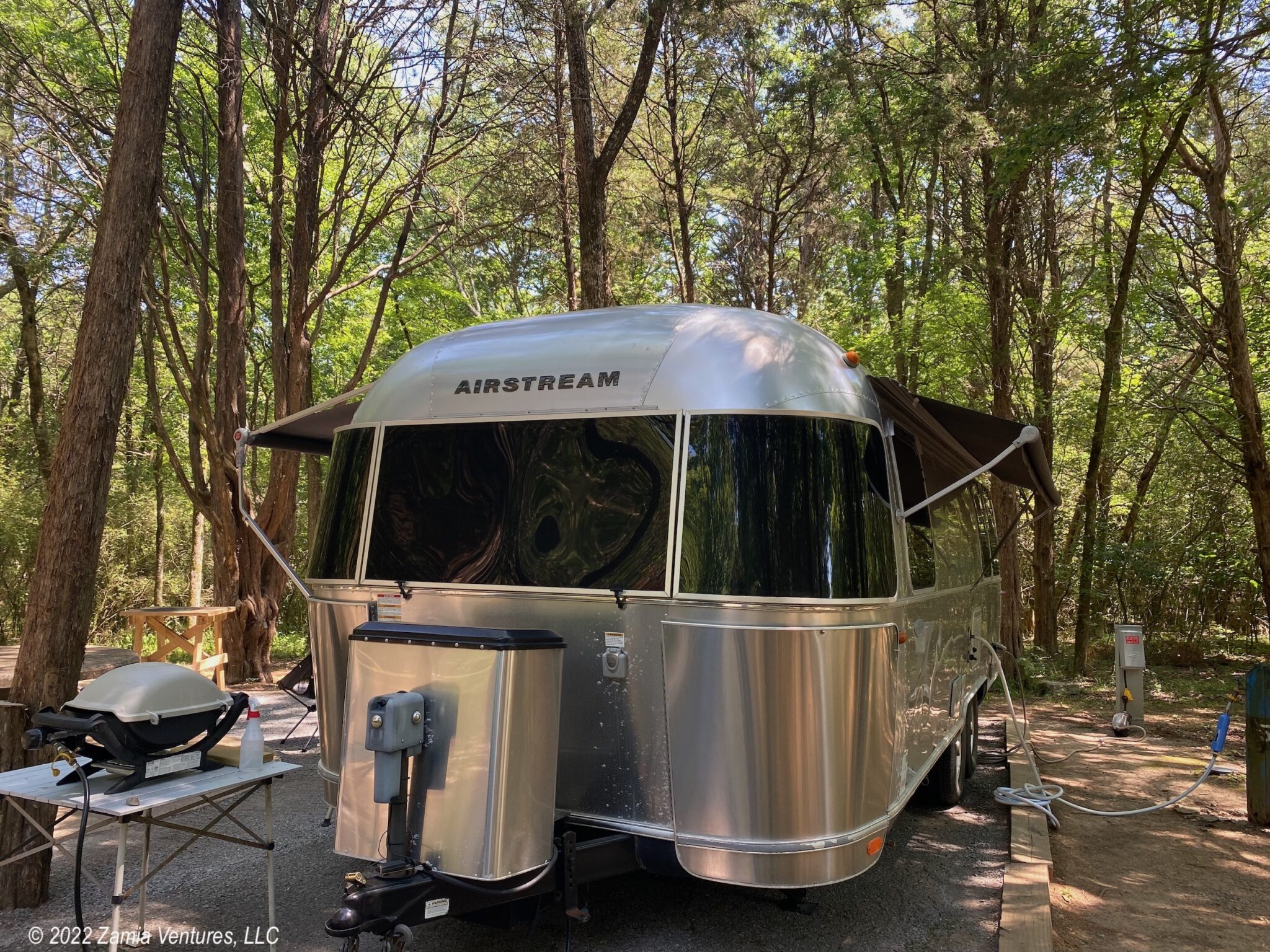 When we planned our transit through Nashville months ago, we didn’t expect it to coincide with a heat wave bringing record-breaking high temperatures. We know from spending a miserable summer in Florida living in our Airstream that RVs are just not made for extreme temperatures. So we were a little nervous when we saw forecasts with daily highs of 99-101 degrees throughout our stay. Ugh!

Fortunately our site at the Army Corps of Engineers Seven Points Campground featured deep shade, and we supplemented this by deploying all our awnings. Sure, it meant that we needed to run the lights in the rig even during the day, but there’s nothing wrong with living in a cave if it means an extra degree or two of cooler temperatures. Assisted by all that shade, and the fact that we did zero cooking inside the rig, our A/C performed well and kept us very comfortable. 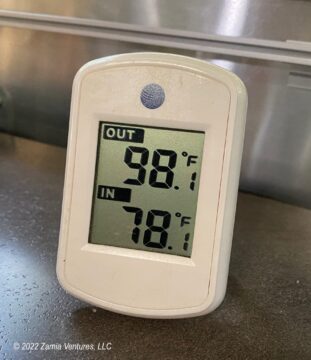 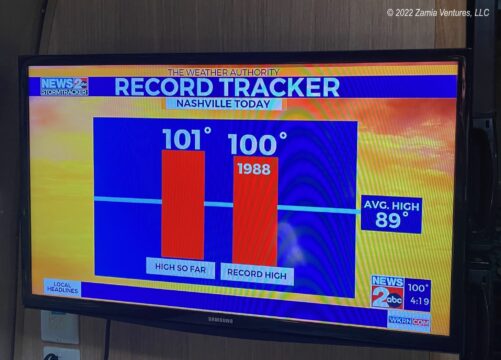 The biggest challenge with the high temperatures was that outdoor activities were really difficult, and had to be concentrated in the morning. There is no way to wander around the entertainment district in the afternoon looking for an interesting brewpub when the heat index is 104. Getting out early meant that we were trying to drive into a large city with huge, intertwining (read: accident-prone) highways during rush hour. So while the campground is only 20 miles from Nashville, it regularly took us an hour to get to our destinations. But even though the heat and traffic conspired against us, we still managed to complete some enjoyable visits.

First I need to go back to the day we arrived. Our trip from Huntsville to Nashville was relatively short, and we knew from reading always-helpful Campendium reviews that Seven Points is very particular about adhering to the designated check-in time. So along the way we stopped at Stones River National Battlefield in Murfreesboro to spend an hour and ensure we didn’t arrive too early. Neither of us is a big Civil War buff, but we are suckers for those brown National Park Service signs. As usual, the NPS interpretive information did an excellent job of explaining the overall context of the war and the importance of this particular battle. Stones River had a devastatingly high casualty rate — on each side one-third of soldiers were either killed or wounded — and secured a critical transportation route for the USA. The battle ended January 2, 1863, and the Union victory provided important support for the Emancipation Proclamation, which went into effect January 1, 1863. Three things particularly struck me during this visit.

First, a display about military communications showed contemporary drawings of soldiers stringing telegraph lines, and highlighted the major advance of near-instantaneous sharing of orders. Reflecting on the current war in Ukraine and the soldiers’ use of Starlink satellites, it reinforced that having good information is a key factor in tactical military success and successful armies have always used the latest and greatest communication technologies. Second, a reproduction of an 1863 Thomas Nast cartoon highlighted just how modest the expected results of emancipation were. Images on the left side depict some of the horrors of slavery: families separated at auction and enslaved people being whipped. On the right are some of the results of emancipation: Black parents sending their kids to public school, while farm workers line up at the plantation cashier to actually be paid for their labor. The fact that so many people fought so long and so hard to deny these basic rights to fellow human beings (as emphasized by our visits in Montgomery) is discouraging, to say the least.

Third, visiting the national cemetery that was established at this battlefield is a stark reminder of the incredible human cost of the Civil War, in which more Americans were killed than any other conflict.

This only our third stop of this trip but already our second state capital. We made sure to visit the neoclassical Capitol building, which is among the minority of U.S. state capitols with no dome. It sits high on a bluff above the city with commanding views in every direction. We also explored the Bicentennial Mall that stretches nearly a mile north from the capitol. The organizers of the state’s 1996 bicentennial celebration undertook an unbelievably ambitious program of monument-creating, and the result is the most elaborate set of state-centric monuments we’ve ever seen. Also, it’s obvious the planners were committed to supporting the local granite industry.

The Bicentennial Mall is anchored by a waist-high granite wall that runs 3/4 of a mile down one side of the green space and is inscribed with events from Tennessee’s history. The earliest entry is from one billion years ago, the point at which Tennessee’s oldest rocks were formed, and progresses through the entire history of human habitation in the state. There is a large fountain backed by a huge granite wall honoring the rivers of Tennessee. There is a small fountain on the site of one of the first springs that made Nashville habitable, surrounded by granite monuments honoring Tennessee’s statehood in 1796. There is a giant 100-foot-long map of the state made of granite and inscribed with cities and other landmarks. In front of the map are six blocks of granite with smaller Tennessee maps showing things like state parks around the state, the geological classifications of various regions of the state, and more. There is a World War II memorial featuring 10 enormous granite slabs inscribed with pictures and text relating to WWII; the five on the east side relate to the European theater while the five on the west side relate to the Pacific theater. The focal point of the WWII monument is an eight-ton sphere, carved as a globe, that rotates on a cushion of water. These folks clearly love their state, and they also love their granite. 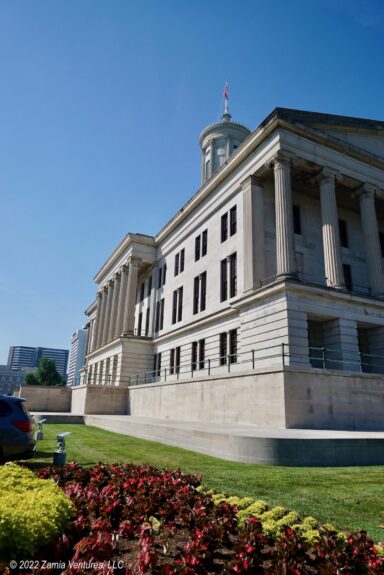 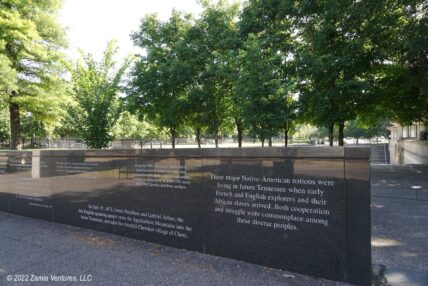 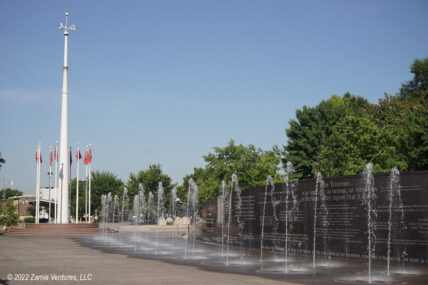 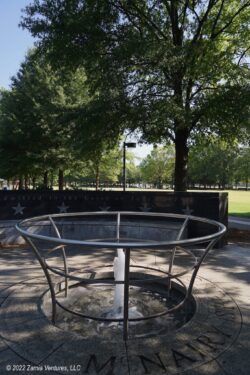 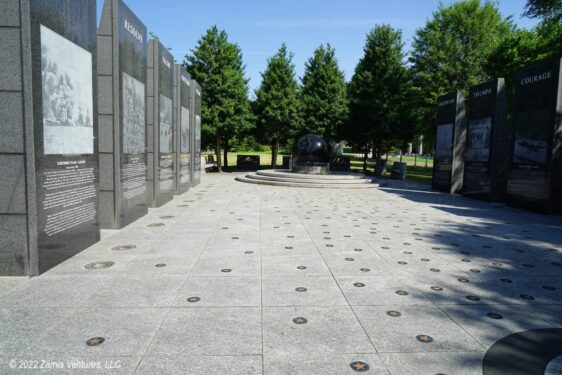 The highlight of our time spent downtown was the excellent Tennessee State Museum, located at the north end of the Bicentennial Mall. From the impressive purpose-built facility to the extremely well-done exhibits, this museum stands head and shoulders above other similar free public state history museums we have visited. The museum was comprehensive, covering political and historical events but also community, culture, decorative arts, and even athletics. Displays were nuanced, telling many sides of a story at once. 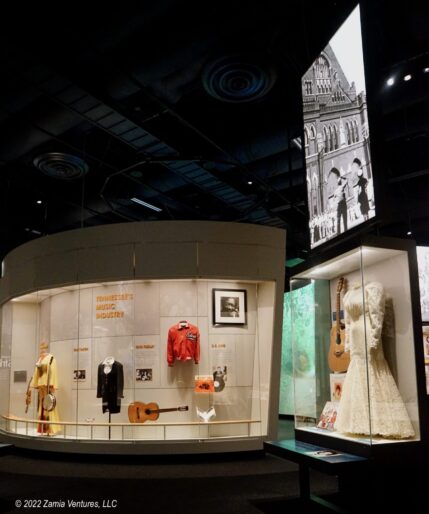 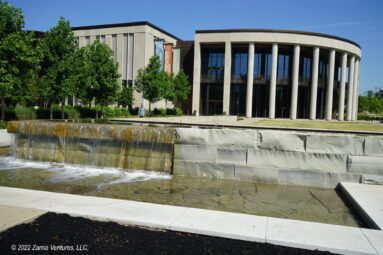 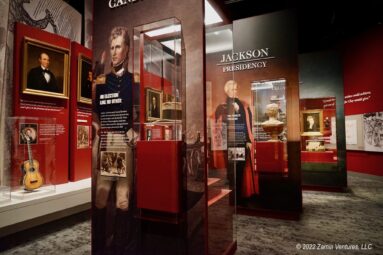 The museum covered a full range of historical topics that were relevant to the nation and the world, but not surprisingly there is always a Tennessee angle. For example, the section on the Depression and the New Deal had a focus on the Tennessee Valley Authority and the importance of rural electrification in the state, while the WWII section highlighted the Manhattan Project activities in Oak Ridge. The museum also emphasizes the three presidents from Tennessee: Andrew Jackson, James K. Polk, and Andrew Johnson.

The museum has exceptionally high quality artifacts, including soft goods. How does a public museum manage to acquire the hat worn by Andrew Jackson at his inauguration, a suit sewn by Andrew Johnson when he was a young tailor, and performance costumes worn by Johnny Cash, Dolly Parton, Loretta Lynn, and Tina Turner? The quality of the exhibits and artifacts puts this museum on par, in my mind, with the Smithsonian Museum of American History in Washington. 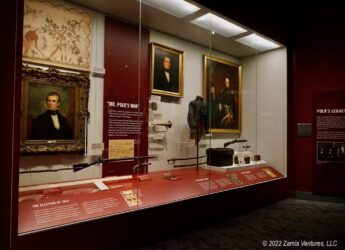 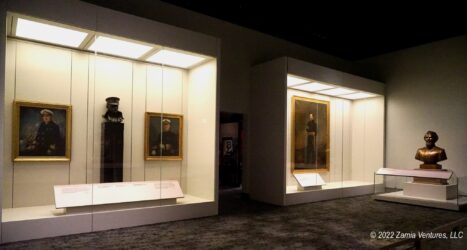 The whole museum was good, but we found two things particularly remarkable. First, you know how people sometimes say that Confederate monuments belong in museums, not in the public square? Tennessee is actually doing that! There is an entire room in the State Museum devoted to images of leaders that have been removed from the Capitol for various reasons. The room is anchored by a bust of Nathan Bedford Forrest, who was an important Confederate general but also the first Grand Wizard of the KKK.

The other thing we learned was how incredibly divisive and destructive the Civil War was for this state. Unlike Alabama, where the white population was pretty unified behind the Confederate cause, Tennessee was quite divided. It was the last state to secede, influenced by the pro-Confederate sentiment in cotton-heavy Western Tennessee, but then pro-Union areas in Eastern Tennessee tried to secede from the state and rejoin the Union.  When any area of the state was occupied by either the Union or Confederate army, there were relentless guerilla attacks and civilian resistance because the population was quite divided in its loyalty. There were more Civil War battles fought in Tennessee than in any state other than Virginia, leading to massive destruction of property and infrastructure. And unrest continued after the war, with Confederate sympathizers being murdered by their neighbors in East Tennessee after surrender while freed Blacks were murdered in the Memphis Riots of 1866. After going through such a shattering period, it’s remarkable that people here developed the enthusiastic state identity shown in all those granite monuments.

Our only ding on this museum is that it’s not always clear what route to follow to cover each section, so we found ourselves backtracking and looping around at times. They could really use some IKEA-style floor arrows. But that’s a pretty small quibble about an overall great museum.

Any time we visit a new city, I always check whether there is a botanical garden that participates in the American Horticultural Society’s Reciprocal Admissions Program. Our home garden membership has saved us a fortune by giving us access to interesting gardens across the country, and Cheekwood Estate and Gardens in southwest Nashville was another delightful find. The property was built as a private home of a family that became wealthy through Maxwell House coffee (it was first served in 1892 at the historic Maxwell House Hotel in Nashville). The entire property was developed under the supervision of a NY-based residential and landscape architect, and everything blends harmoniously. The main house is faced in limestone quarried right on the property, while the elegant gardens work seamlessly with the terrain. 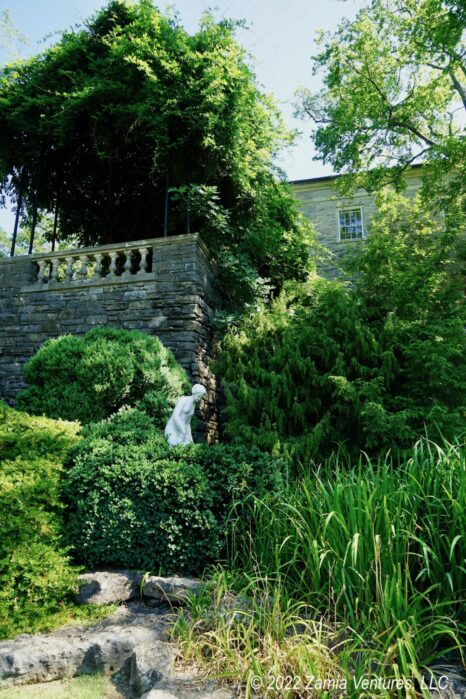 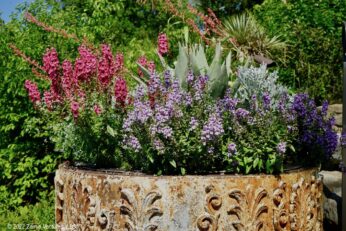 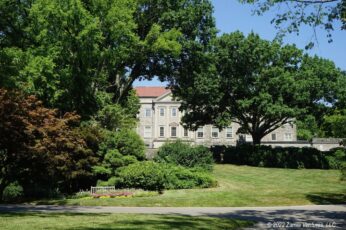 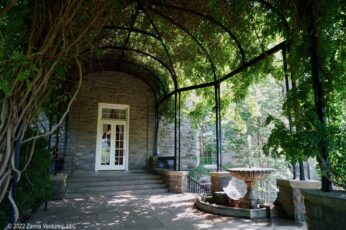 Pergola on the side of the home 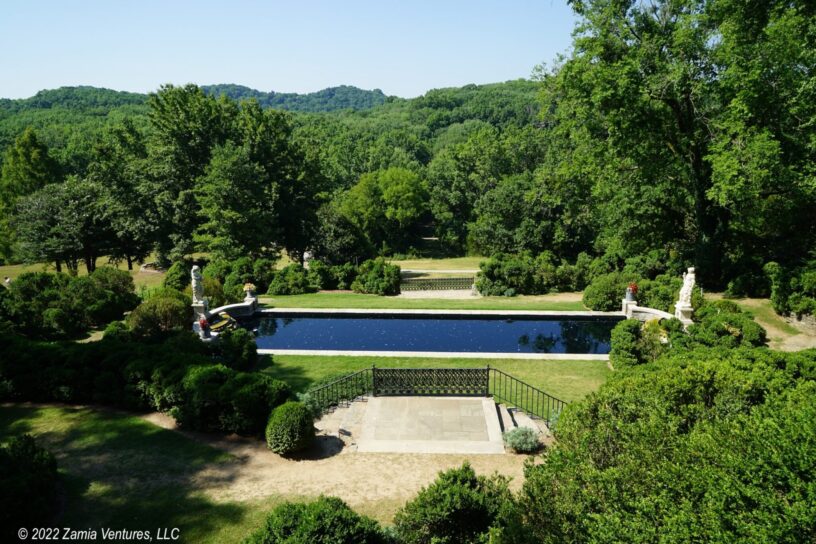 Cheekwood became an art museum and garden in 1960, serving as the successor to the Nashville Museum of Art. We only visited the gardens, which retain their residential, small-scale character even as new sections have been added over the years. We particularly enjoyed a series of contemporary sculptures installed along the woodland paths, as well as the lovely formal gardens like the Italian-inspired boxwood garden, the water garden, the Japanese Garden, and the color garden. I also liked a conceptual piece called Colorscapes by Luftwerk. One large lawn was filled with fabric hangings in various colors inspired by German geologist Abraham Gottlob Werner’s groundbreaking book Nomenclature of Colours, first published in 1814, which was a taxonomy of the colors of the natural world. Ken thought it reminded him too much of laundry. 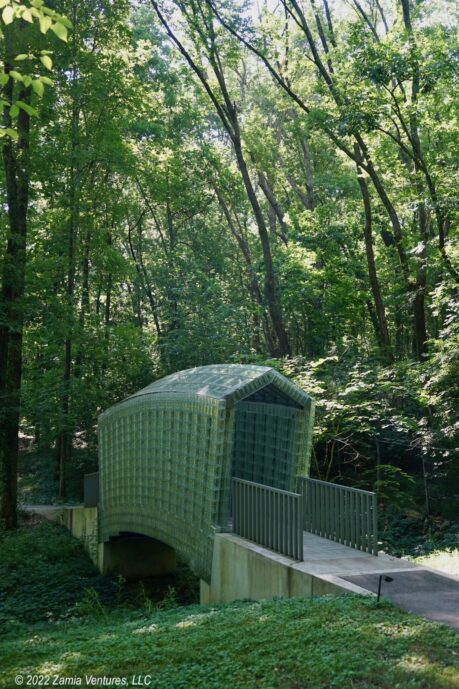 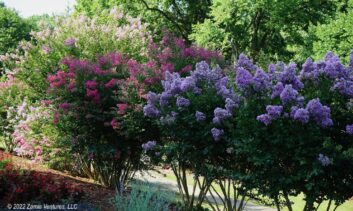 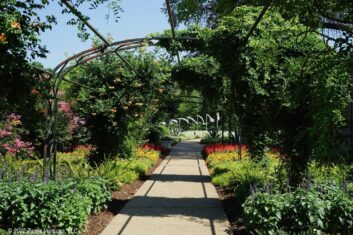 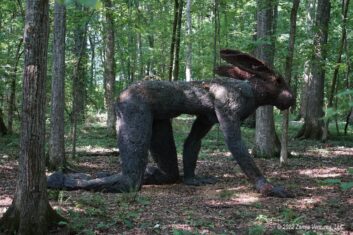 Unfortunately I can’t unsee this. 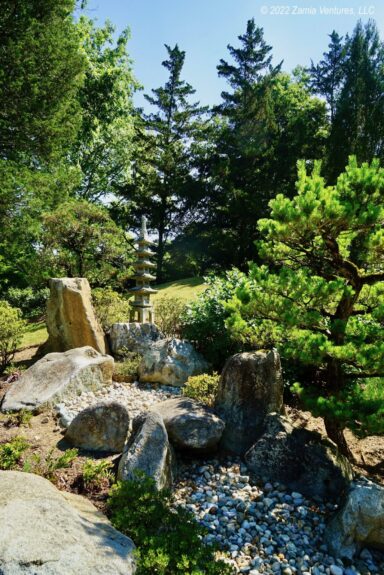 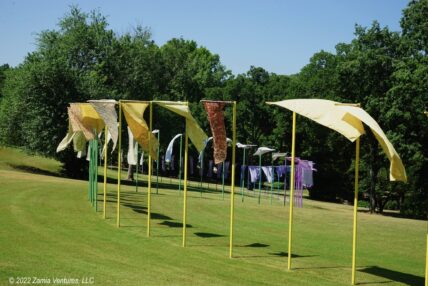 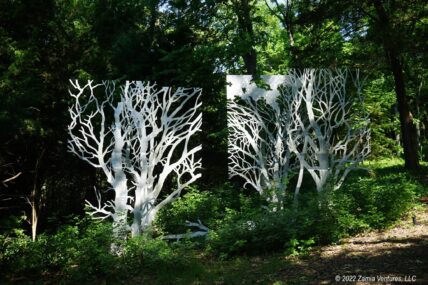 We Did Very Little

Nashville is full of attractions, and we barely scratched the surface. We had heard good things about destinations like the Country Music Hall of Fame, Johnny Cash Museum, Musician’s Hall of Fame, live music venues like the Grand Ole Opry, and Andrew Jackson’s Hermitage. But thanks to heat-induced malaise, traffic snarls, and only a moderate level of interest in our part we didn’t see the value in spending $25++ per person for these sorts of activities. Instead, we visited some great free places and spent the rest of our time enjoying our serene lakefront campground and trying to stay cool while catching up on reading and podcasts. Some campsite visitors, as seen through our back window: 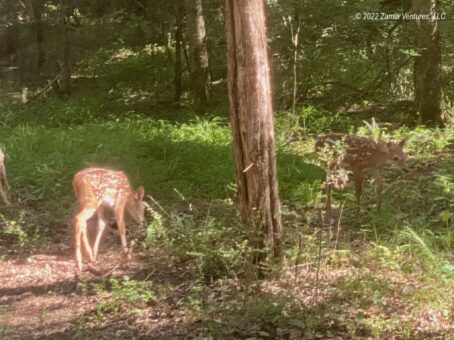 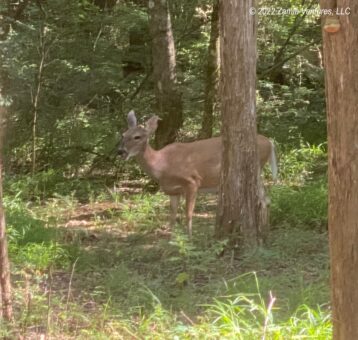 Next: I hope you’re not tired of hearing about slavery, the Civil War, and emancipation, because we are headed to Springfield, IL to visit the home of Mr. Lincoln.

A Brief Trip to Our Nation’s Capital