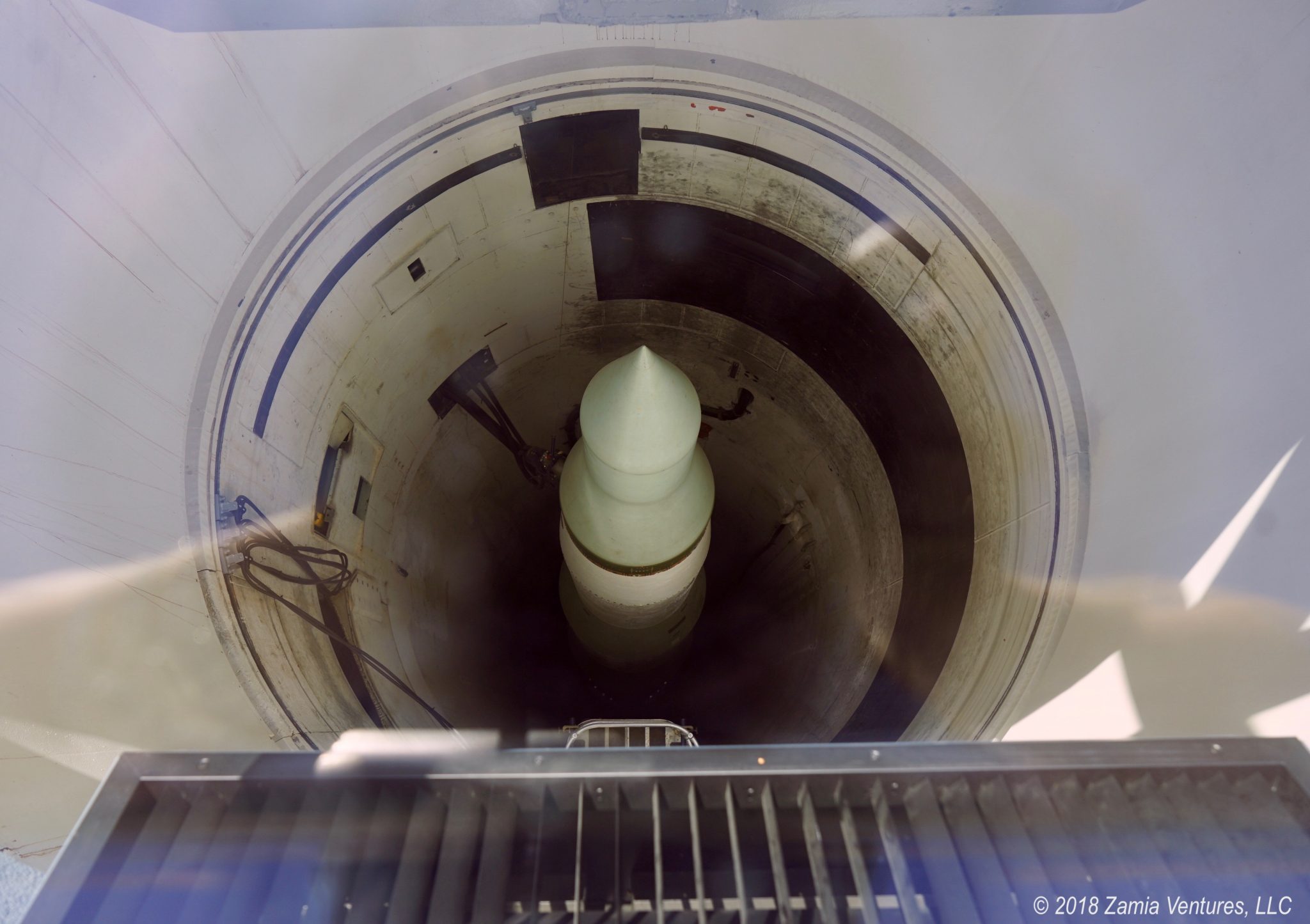 In addition to being completely blown away by the scenery in the Badlands, we also visited several sites that reminded us of the grim history of this wild and unpredictable place. One preserves the history of a massacre that actually occurred, while the other tells the story of the destruction of the human race that fortunately hasn’t happened yet.

The town of Wall is the site of a small museum which interprets the history of European-Native American interaction with a focus on the Lakota people and specifically the Wounded Knee Massacre of 1890. The event took place in what is now the Pine Ridge Reservation directly south of Badlands National Park (map here). The Wounded Knee Museum tells the sad story of an event in which a large group of one of the seven bands of Lakota (Sioux) people were apprehended by a cavalry regiment of the US Army. The Army proceeded to disarm the Lakota and then mowed down the whole community using the machine guns of the day, killing several hundred men, women, and children. This came after the US government repeatedly failed to honor the terms of the treaties it entered with the Sioux, by taking away large amounts of the land originally set aside as reservation and failing to provide adequate food for the people to survive on the harsh and barren lands allocated to them as reservation land. As you can see, there is good news for any blog readers worried that we might not have to endure more awkwardness about atrocities committed by white Americans now that we’ve moved out of the vicinity of any civil rights monuments.

The whole museum was totally depressing, as one might expect, but there were several interesting points raised in the materials that were new to me. One is that the tensions between the Sioux and the Army were at a high level because of an apocalyptic cult that was sweeping through the reservations. The Native Americans of the Great Plains were tired, hungry, and hopeless, having seen the vital bison virtually eradicated by over-hunting and after being screwed over repeatedly by the US government. When a self-proclaimed prophet in the form of a Paiute named Wovoka preached his vision of Jesus returning to earth imminently to drive the white people from Indian lands, native people were pretty receptive to say the least. The rituals they performed (Spirit Dances or Ghost Dances) were the frenzied gyrations of people high on spirituality, but were viewed by the Army as some sort of war dance as a prelude to conflict. The band killed at Wounded Knee was one that practiced the Spirit Dances. It turned out that the special dancing shirts they wore were not, in fact, immune to bullets as believed by the practitioners.

I also was not aware that the Lakota people had successfully sued the federal government for violating treaties. Specifically, the removal of the sacred Black Hills from the Sioux reservation — not coincidentally, just after the discovery of gold in the hills — was in direct contravention of an 1868 treaty that established Sioux reservation lands. Beginning in 1920, the tribe brought a series of claims, and ultimately prevailed under the Fifth Amendment (the takings clause). The Supreme Court decision in U.S. v. Sioux Nation was a long time in coming, finally rendered in 1980 and awarding money damages for the taking of the Black Hills including over 100 years of interest. Interestingly, the tribe has not yet accepted the staggering sum it was awarded in the judgment, several hundred million dollars, because accepting the money would mean relinquishing claims to recover the Black Hills land. There appears to be an ongoing internal debate within the tribe on what course of action best serves the tribe. I would take the money and run, but the culture of indigenous people seems to have a strong connection to physical location, similar to the connections felt by the homesteaders we learned about at the Homestead monument. The question of whether and how to strengthen native communities is very much a live and difficult issue for tribes that find themselves with reservation lands in the remotest areas of the country.

The Badlands is also home to a National Park Service unit focused on the Cold War and the nuclear arms race, the Minuteman Missile National Historic Site. This site is linked to the Strategic Air Command, which we visited in Omaha, since it interprets the land-based missiles that were part of the “nuclear triad” overseen by SAC. The centerpiece of the interpretive site is yet another architecturally stunning visitor center. While most government buildings I’ve experienced are dated and drab — and not just the DMV! — I am glad to see that the National Park Service invests in structures that are an appropriate showcase for our national heritage. 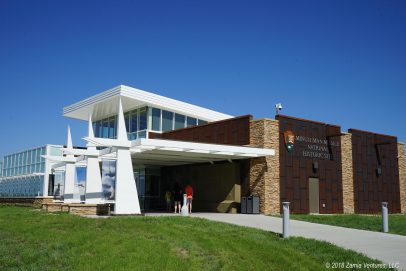 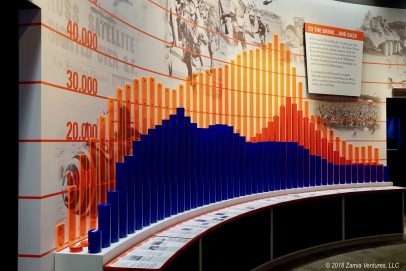 At the visitor center we learned why all these missiles are located in the Great Plains: the nuclear arsenal was assumed to be the first target the USSR would attack, so it should be placed as far as possible from population centers and infrastructure. While the people of this area were probably not excited to become the top target for Soviet thermonuclear weapons, it’s certainly comforting to me to know that the federal government shares my opinion of Wall Drug. The northern location was also relatively close to the Soviet Union, allowing missiles to be programmed for a trajectory that crossed the north pole.

The Minuteman II missiles that are the focus of this site represented an important step forward in missile technology. The earliest intercontinental ballistic missiles were launched on rockets such as Atlas and Titan (also key components of the space program) which used unstable liquid propellant. They needed to be fueled immediately before launch, and had to be lifted above ground for launch, so they were not ideal weapons to be used for rapid response to an attack. In contrast, Minuteman contains inert solid fuel so it can be stored in an ignition-ready state, and can be launched directly from the silo, giving rise to the slogan “worldwide delivery in 30 minutes or less.”

The visitor center does a nice job of illustrating the threat to life on earth posed by the ever-increasing strength of the nuclear arsenals built up during the Cold War, and how the US and USSR both ultimately recognized the sense in reducing this threat through a series of arms reduction treaties. There were also plenty of sobering reminders of the (surprisingly common) near-misses when computer or sensor glitches nearly convinced either the Americans or the Soviets that they were under attack and a response needed to be ordered within a few tense minutes.

The visitor experience also includes a separate tour of one of the underground launch control centers, a cement-encased capsule designed to withstand a near-miss nuclear attack, where air force officers spent 24-hour shifts in a state of constant readiness to launch. 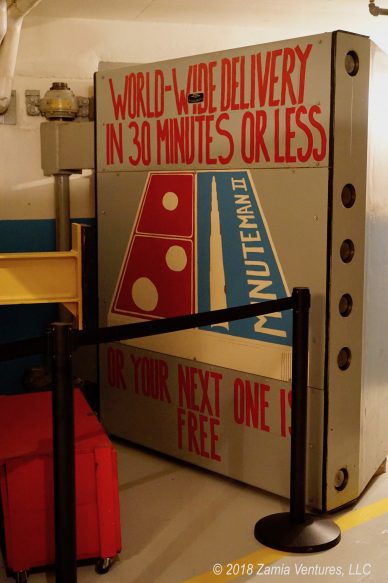 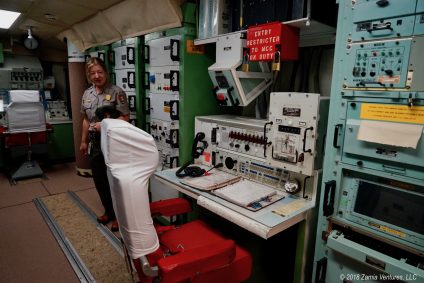 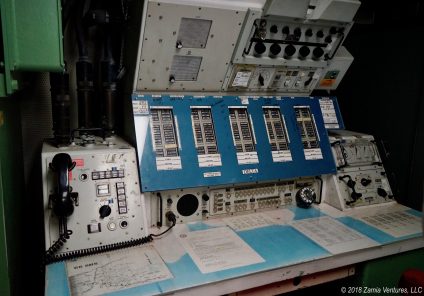 Each launch control center was connected by physical communications cable to ten missiles, and could launch using computers that seem frighteningly primitive. There were scores of these underground capsules placed throughout the Great Plains to control the 1,000 missiles kept on active alert during the height of the Cold War. It was interesting to learn about all the safety precautions built in to prevent either an accidental launch or a hostile takeover of a launch facility. Not only did a launch require authentication of the launch order using continuously-changing codes and the simultaneous turn of two keys in different locations of the capsule — as has been illustrated in countless Cold War movies — but two additional keys needed to be turned by missileers elsewhere.  The ground level points of entry to launch capsules were heavily guarded. Launch capsules were opened only once every 24 hours, and different capsules were always opened at different times, to prevent a surprise attack on the ground from getting into the capsules.

While there were numerous precautions built into the system to prevent unauthorized launch, including routine psychological evaluation of all missileers, the Air Force also made sure to guard against a loss of capability in the event of a strike by the Soviets. To prevent loss of communications, each launch capsule had about 5 different communications lines and antennae, including some that would automatically pop out of the ground if the main antenna was disabled. Even more impressive was Operation Looking Glass, which kept a crew of Air Force officers in the air continuously for nearly 30 years for the sole purpose of taking over control of the missiles if ground capabilities were destroyed. The crew in the air would always include a general and at least 4 missileers, so if they activated control over the Minuteman arsenal they could launch any or all of the missiles with the required 4 key turns.

The visit gave us plenty of interesting topics to consider and discuss, like whether the Soviet officer who received computer information about 5 incoming American ICBMs in 1983 and failed to relay the information to superiors, believing it to be false, is a hero or insubordinate. I guess staring down a silo at a Minuteman missile (photo at top) lends itself to deep thoughts.

Awed by the Rugged Grandeur of the Badlands

7 thoughts on “Annihilation in the Badlands, Actual and Potential”