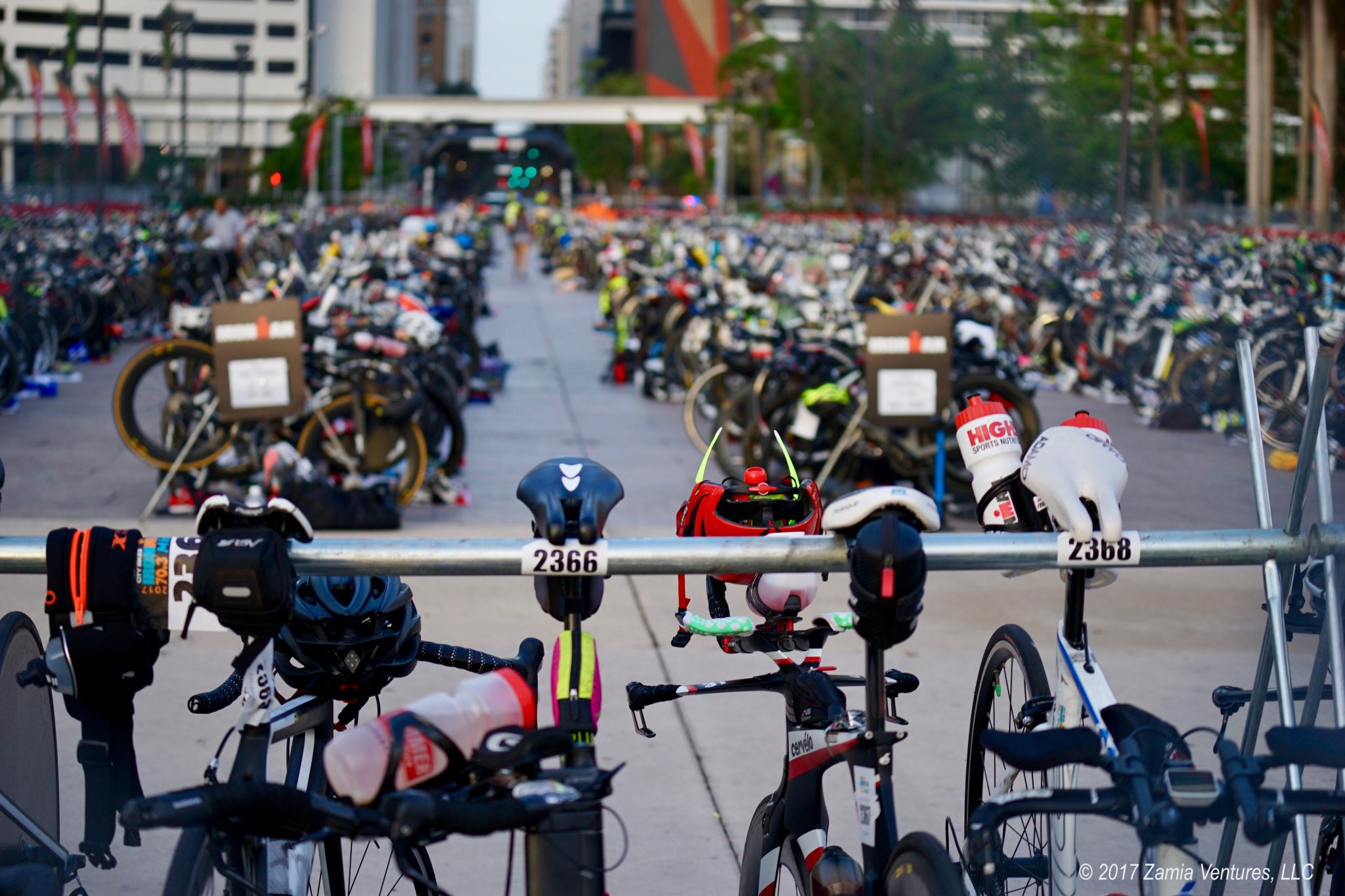 One of the best things about living in downtown Miami is the frequency of festivals, races, and other special events, which typically take place within easy walking distance of our apartment. This means that lazy people like us can enjoy music, fireworks and other shows by merely sitting on our balcony or heading to the pool deck of our building. Walking down to the entrance to our building places us along the route for races like the Race for the Cure (where costume creativity seems to be more important than speed) and events like the Major League Baseball All-Star Game Parade.

Today, we made the supreme effort of ambling a few blocks to watch an Ironman triathlon. In this race, thousands of people voluntarily agreed — and paid entrance fees! — to swim 1.2 miles, bicycle 56 miles, and run 13.1 miles. Technically this is a half Ironman, with a full Ironman race covering twice that distance. However, the half Ironman is grueling enough, especially since Miami at this time of year still features temperatures in the mid-80s and high humidity. We were happy to be on hand to cheer on the athletes as they powered through the challenging event.

We knew the day’s windy conditions would affect the race, since we faced extreme headwinds just walking from our apartment to the park along what would become part of the running course later in the day. The wind definitely affected the open water swim in Biscayne Bay that starts the event. Swimmers had trouble staying on the course in the section with the worst crosswinds, but a small fleet of race monitors on kayaks, paddleboards, jet skis, and boats was on hand to point them in the right direction.

The “transition area” where the athletes switch between modes was located in the heart of Bayfront Park and is always an interesting place to watch the event. The speed with which the professionals jumped from swimming gear onto their bikes is remarkable. On the other hand, there were many people who were surprisingly challenged by trying to operate gear that, presumably, they have been training on for months in preparation for the race.

In the proud tradition of the peanut gallery, I internally mocked  Ironman participants because they were struggling to get their feet into their fancy cycling cleats while simultaneously trying to mount their bikes at the road race start line … while I was sitting in the shade drinking my morning coffee. But we did clap and cheer, so there’s that.

The hero of the bike start line was a volunteer who provided quick assistance with mechanical issues. He masterfully popped dropped chains back on, minimizing the delays the athletes experienced, while also keeping some very adrenaline-pumped people from panicking about the malfunction. We even saw him replace two separate inner tubes on bikes that developed flats, in less time than some of the participants took to figure out how to get their wet feet into bike shoes that were already attached to their pedals. Below, a collage of moments of the bike start hero saving the race for anxious participants. 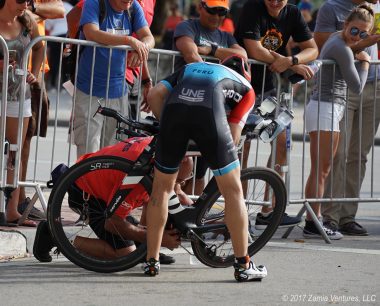 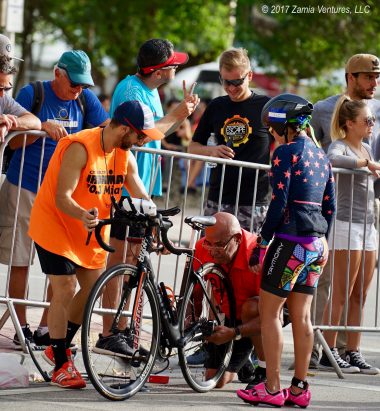 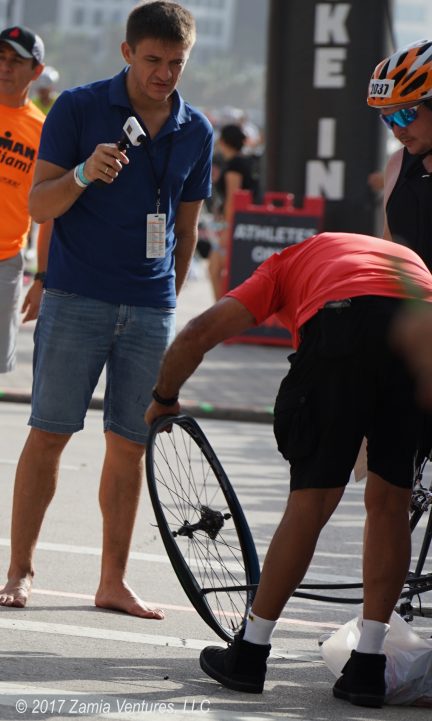 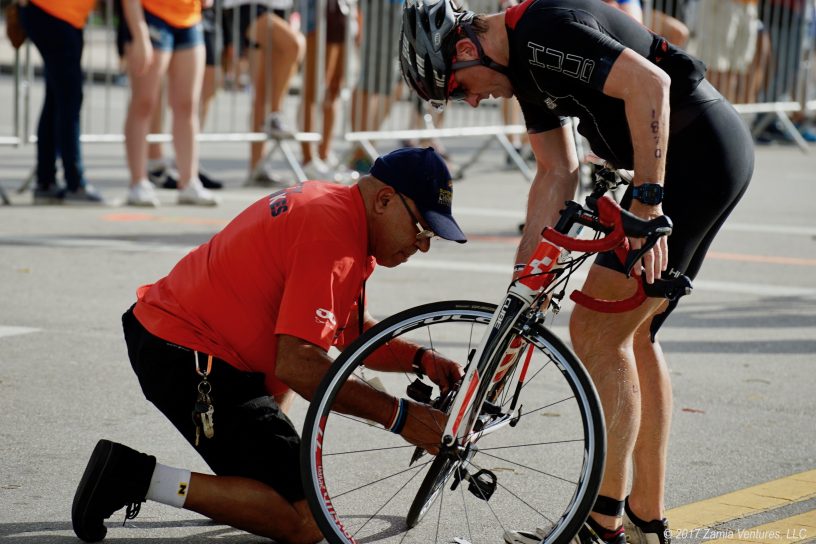 We’ve always been impressed by the international mix of participants in the big sporting events here in Miami. There were competitors — and plenty of fans waving national flags — from nearly all the countries in North, South and Central America, as well as many European countries. Our winner in the men’s division is from Brazil, while the winner in the women’s division hails from Australia, but they of course are both professionals who travel the world to compete in these events.

The vast majority of the participants were amateurs who brought their gear and their personal fan sections, many with coordinated signs or T-shirts, from many different corners of the world. I am surprised by their dedication, but then again I am equally surprised by how many people own cow bells, which were out in full force among race viewers.

The most humbling thing, I think, is the large number of participants who seem to be the opposite of professional athletes. I am somewhat awed by the people who don’t appear to be very fit at all, who really struggle through the race, and still finish.

We are reasonably fit and have successfully participated in several different 5k races here in Miami, but there is no way I would attempt an Ironman, even the half-distance version. Each and every element requires powering yourself through a distance that just seems utterly painful and unattainable, and to do them all in one day is just cruel. Yet lots of apparently regular people were out there competing and actually finishing the race. It’s quite a testament to the human spirit, or foolish optimism, or possibly really good painkillers.

Click through the gallery for more images from the race day. 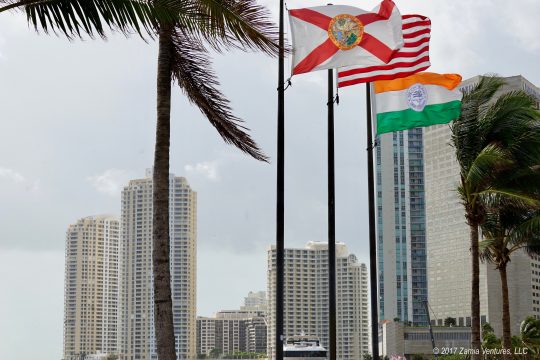 It was an extremely windy day 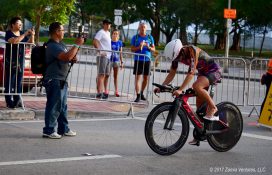 The eventual women’s champion embarking on the road race. 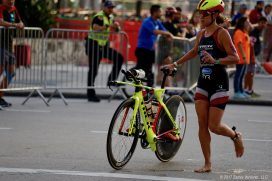 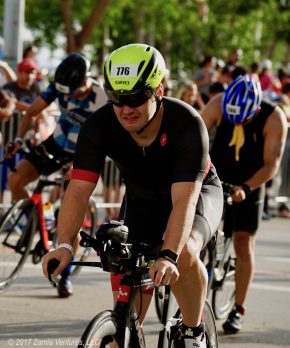 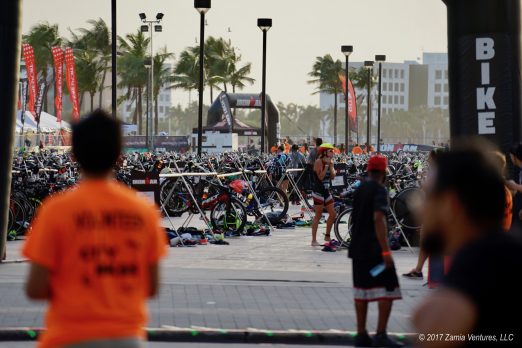 Plenty of racers still to come. 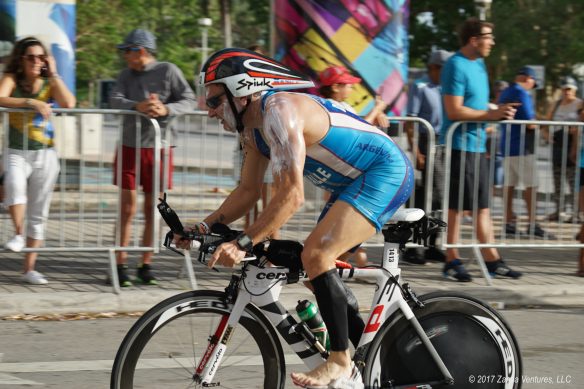 This man from Argentina has proper respect for our UV rays. 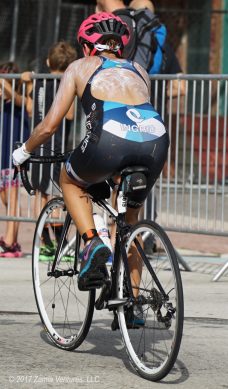 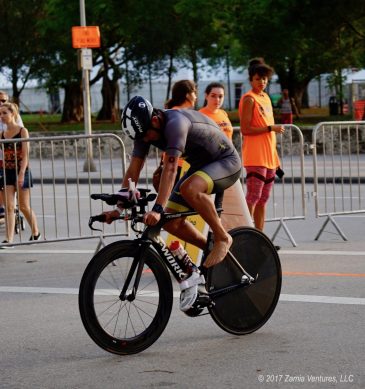 Putting on shoes while pedaling is not a particularly good idea. 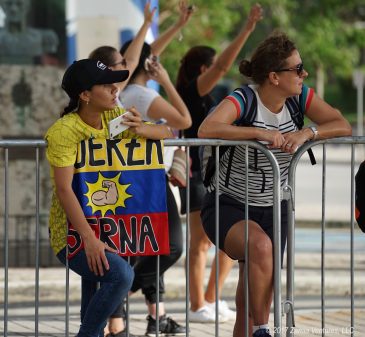 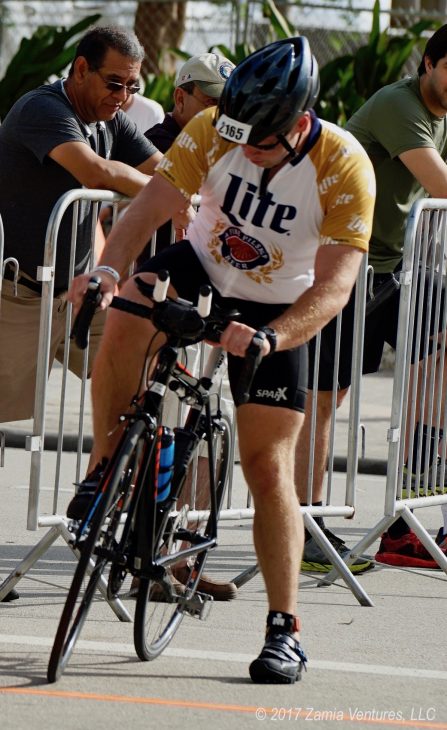 We supported the person who was racing for beer. 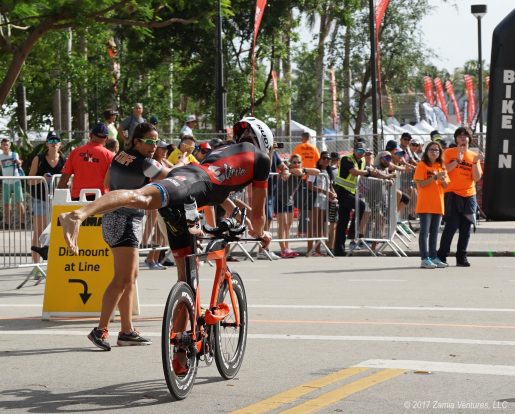 Acrobatic dismount by one of the leading men. 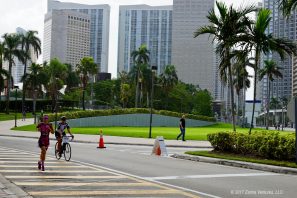 The leaders had bicycle escorts on the running leg. 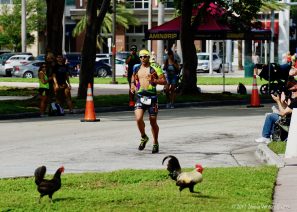 A sign you are in Miami: triathletes must dodge free-range chickens along the course. 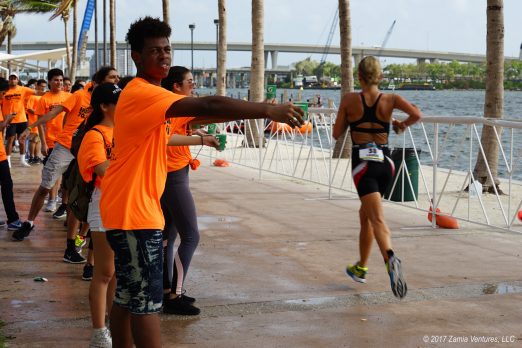 Lots of kids volunteered, including at water stations. 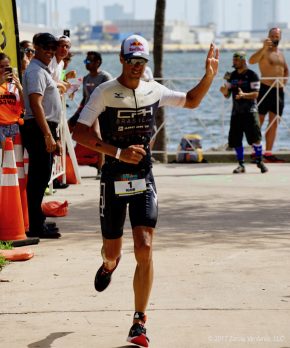 The winner of the men’s division in the finish chute.

Running (or Swimming?) through Coral Gables

Joining the Thundering Herd at the Corporate Run

3 thoughts on “Cheering On the Ironmen (and Women)”