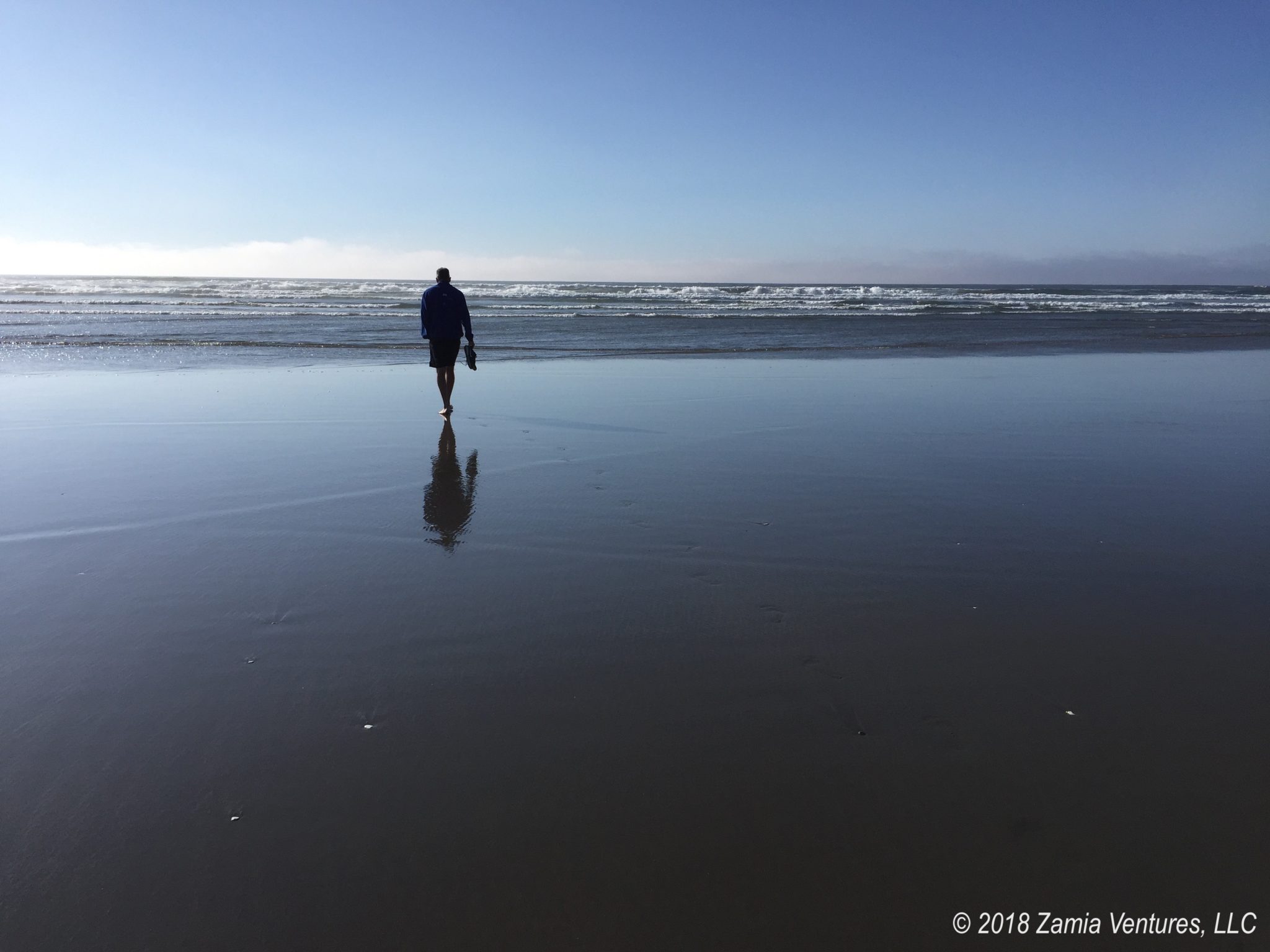 This November 7, 1805 journal entry from William Clark perfectly encapsulates his peculiar spelling and punctuation style, along with the very understandable relief of getting to the long-awaited destination: the Pacific Ocean. At the mouth of the Columbia River, just west of the town of Astoria, Oregon, the Lewis & Clark Expedition completed the journey across the continent. Of course, the Corps of Discovery still had to get back to the east coast after reaching the Pacific. As for us, we have reached… 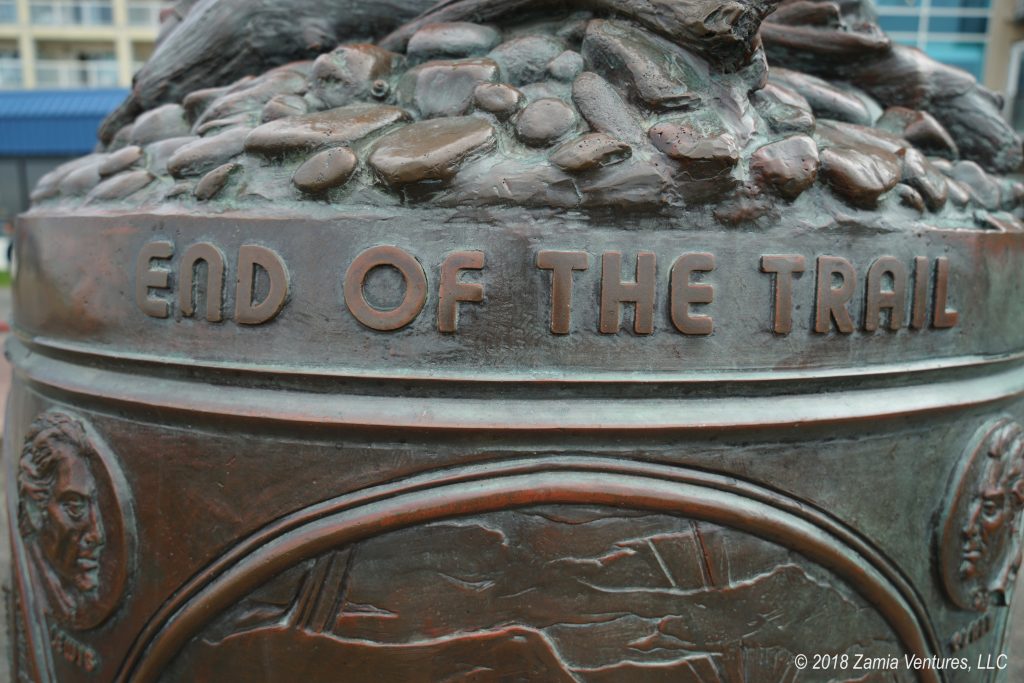 The End of the Trail

After many spending months traveling the route of the Lewis & Clark National Historic Trail, we were pretty excited to reach the end, though probably not as thrilled as the members of the original expedition. Naturally we had several sites to visit in the area.

The first of these was the Lewis & Clark National Historical Park, which occupies the site where the Corps of Discovery spent the winter of 1805-1806. Fort Clatsop, the log structure built by the group for winter quarters, has been reconstructed on the site. There is no archeological evidence of the original structure, since it was made entirely of organic materials that have long since decomposed, but the fort has been reconstructed faithfully from sketches made by William Clark in his journal. While we are generally not fans of historical sites that are completely new buildings made to resemble the original structures, the impulse is understandable when no original components remain. 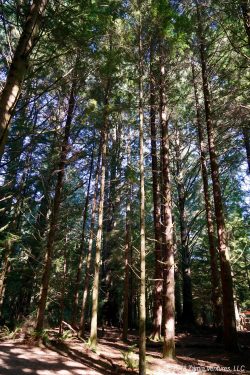 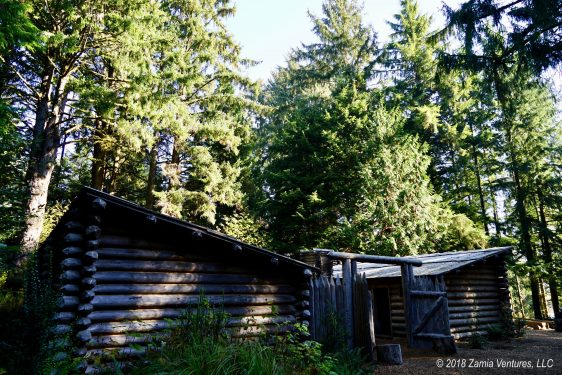 Walking through the chilly, humid forest environment gave us a first-hand appreciation for the misery of the cold, wet winter that the expedition experienced in 1805. However, it was probably an improvement over the bone-chilling winter quarters of 1804 in North Dakota. In both cases, the Corps of Discovery settled in for the winter in a location near several Native American tribes, and trade with the locals was critical for surviving the harsh season.

Having visited at least a dozen different museums that focus exclusively or in part on Lewis & Clark, we definitely feel qualified to judge them, and the museum at Fort Clatsop was not too bad. It did a good job of focusing on the local area, telling the story of what the Corps of Discovery did and encountered when journeying down the Columbia and wintering at Fort Clatsop. The interpretive information did a great job of incorporating primary source material like journal entries to illustrate the impression the local area made on the expedition members, and that source material was made more approachable by correcting the often head-scratching spelling from the original texts. However, the 20-minute film that we watched at the museum was truly terrible. The premise of explaining the Lewis & Clark experience from the point of view of the local tribe could have made for an interesting film, but framing it as a story being told to small children (using very small words and exaggerated tones) made the whole thing seem condescending and ridiculous. The less I say about that the better. Of course, that won’t stop us from watching the film at the next site we visit.

We also made a quick trip down to the touristy little beach town of Seaside, Oregon which is the official end of the trail. The Corps of Discovery set up a salt-making operation on the beach near where the town now sits, which involved round-the-clock boiling of sea water to distill out the precious salt. This was the most remote location visited by the members of the expedition; their return travel generally retraced the route taken on the way west. The end of the Lewis & Clark Trail is marked by a large statue of the explorers gazing out toward the Pacific. Selfies were taken, of course, but then we got the heck out of there. 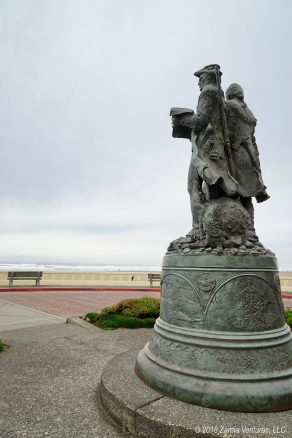 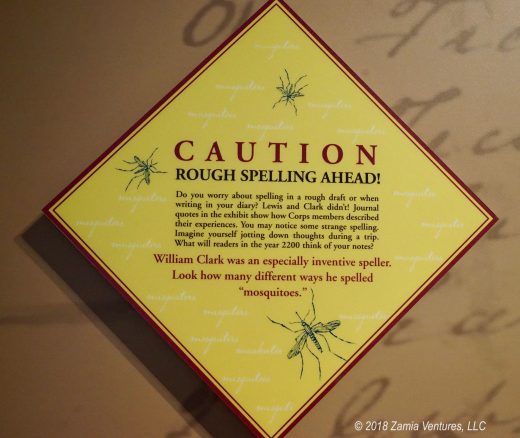 One of my favorite Lewis & Clark signs, from the interpretive center near St. Louis.

The town reminded me in some respects of Provincetown on Cape Cod, including similar architecture with lots of cedar shake exteriors, festooned with carnival-like bright colors, flags, and signs. Even in what was obviously the off-season, with no crowds at all, the tacky tourist town was a little off-putting. I guess we really just don’t like taffy, arcades, or other overpriced entertainment.

Thoughts on leaving the trail

Our journey along the Lewis & Clark Trail was clearly far less arduous than what the Corps of Discovery experienced. We were guided by GPS along well-traveled routes, and instead of hunting for our meals we sustained ourselves with organic foods from Whole Foods and Costco. We only tried rowing upstream against the current of the mighty Missouri during one brief kayak trip. But despite taking advantage of all the modern conveniences available to us, we also have a sense of relief at reaching the end of the trail.

We never doubted that we would reach the destination, but at the outset we didn’t quite know what to expect from our life on the road. While we still have much to learn (ahem, like how to park on a slope) and much more of this huge country to visit, we are now seasoned travelers. We feel a definite sense of accomplishment for completing the route, and also feel much more connected to the early history of our republic. Turning south without having the Lewis & Clark Trail as a guidepost starts an entirely new chapter in our travels. Having learned about what travel style suits us, and what destinations intrigue us, we will rely on our own instincts and preferences in setting our future course.

In addition to soaking in the finale of our Lewis & Clark adventures, we made sure to explore this scenic coastal area, which is anchored by the historic town of Astoria.  The Columbia River estuary is a pretty remarkable place. Many rivers meet the sea in broad deltas of slow-moving water. In contrast, the Columbia River shoots out from a relatively narrow channel, where the huge volume of river water slams into the mighty Pacific, creating disruptive conditions. Normal conditions feature 10 foot waves, while truly massive waves of 40+ feet are commonplace in storms. The sediments carried by the Columbia are constantly being deposited out of the river and then washed away. The ever-shifting Columbia Bar is one of the most challenging areas in the world for vessels to navigate and has earned the nickname “Graveyard of the Pacific.” 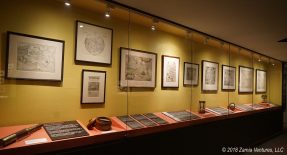 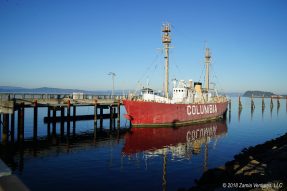 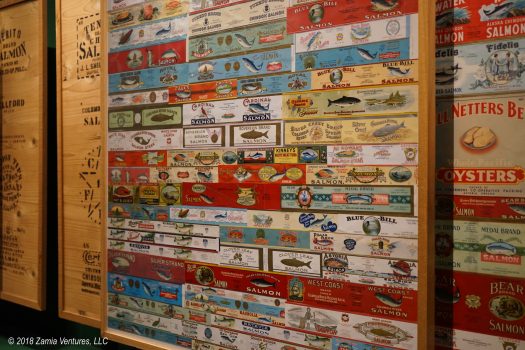 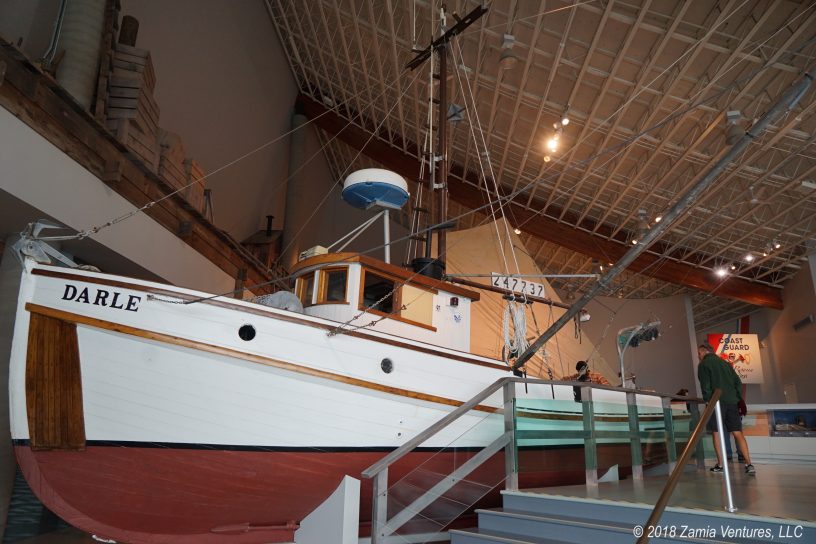 The dramatic story of this waterway is ably told at the Columbia River Maritime Museum in Astoria. The museum has an impressive collection of artifacts, including plenty of full-size boats displayed in the large facility. Some of the highlights for us were the extensive collection of old maps showing how knowledge of the Pacific Northwest improved over time and the interesting information about the history of salmon fishing and canning in Astoria. The dedication of the pilots that guide ships through the treacherous Columbia River Bar is impressive, as is the Coast Guard rescue training program that operates in the area. Docked behind the museum and open to museum visitors is the decommissioned Lightship Columbia, which spent almost 30 years anchored 6 miles west of the mouth of the Columbia, serving as a waterborne lighthouse. The crew members that served aboard the ship endured some of the worst imaginable sea conditions. Much to my amusement, the maritime museum even presented information about the causes and potential treatments for seasickness.

For our main day visiting Astoria, we were joined by a friend from Portland, and as usual it was great to reconnect. After our visit to the museum we enjoyed a leisurely late lunch at the the Buoy Beer Company brewpub, where we each loved our dishes showcasing local seafood. The location in an old cannery building right along the waterfront was fantastic, especially since there were sea lions lounging around on the piers underneath the building! The brewpub has cleverly made part of the lobby floor from glass to allow patrons to watch the large mammals as they relax below. 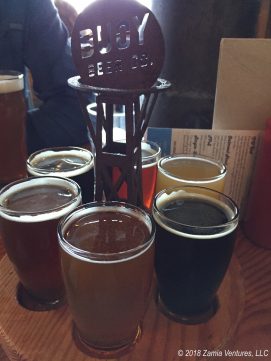 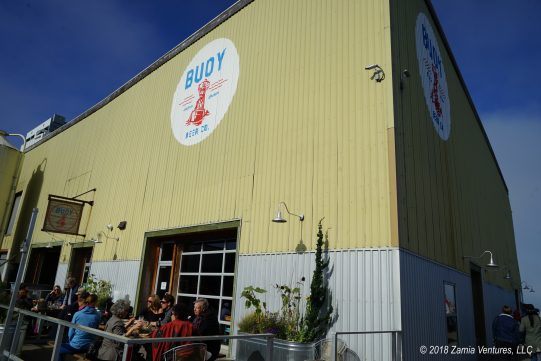 Otherwise, we spent a fairly relaxed off-season week in Fort Stevens State Park, at the extreme northwestern corner of Oregon, where we enjoyed walking on miles and miles of nearly deserted beach. Part of the reason the beach was so empty, of course, is that it was cloudy/foggy/raining and 50 degrees for much of our stay. Despite this, we enjoyed our first real beach time since staying on St. George Island back in March. The beaches at the state park are wide and flat, making for perfect spots for contemplative wandering. Weirdly, the state allows people to drive on the beaches, but the weather kept all but the most hardy souls away so we didn’t have to deal with being run down by crazy beach drivers. Even on sand beaches in relatively calm conditions, the powerful Pacific practically roars as the waves come ashore. Foggy days only added to the sense of drama at the ocean, and we are looking forward to more sights and sounds of the mighty Pacific as we head south. 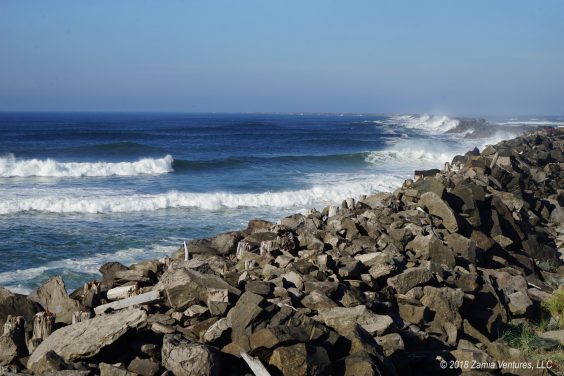 South Jetty at the mouth of the Columbia 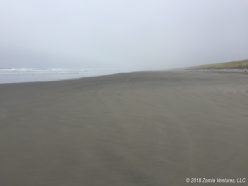 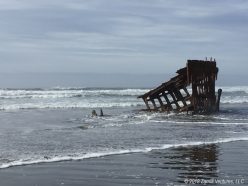 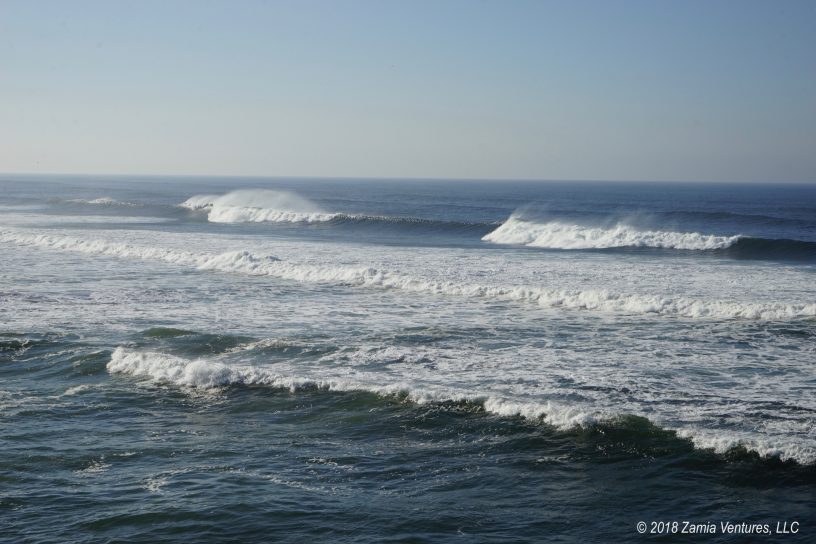 Even on a calm day the wind whips the breakers