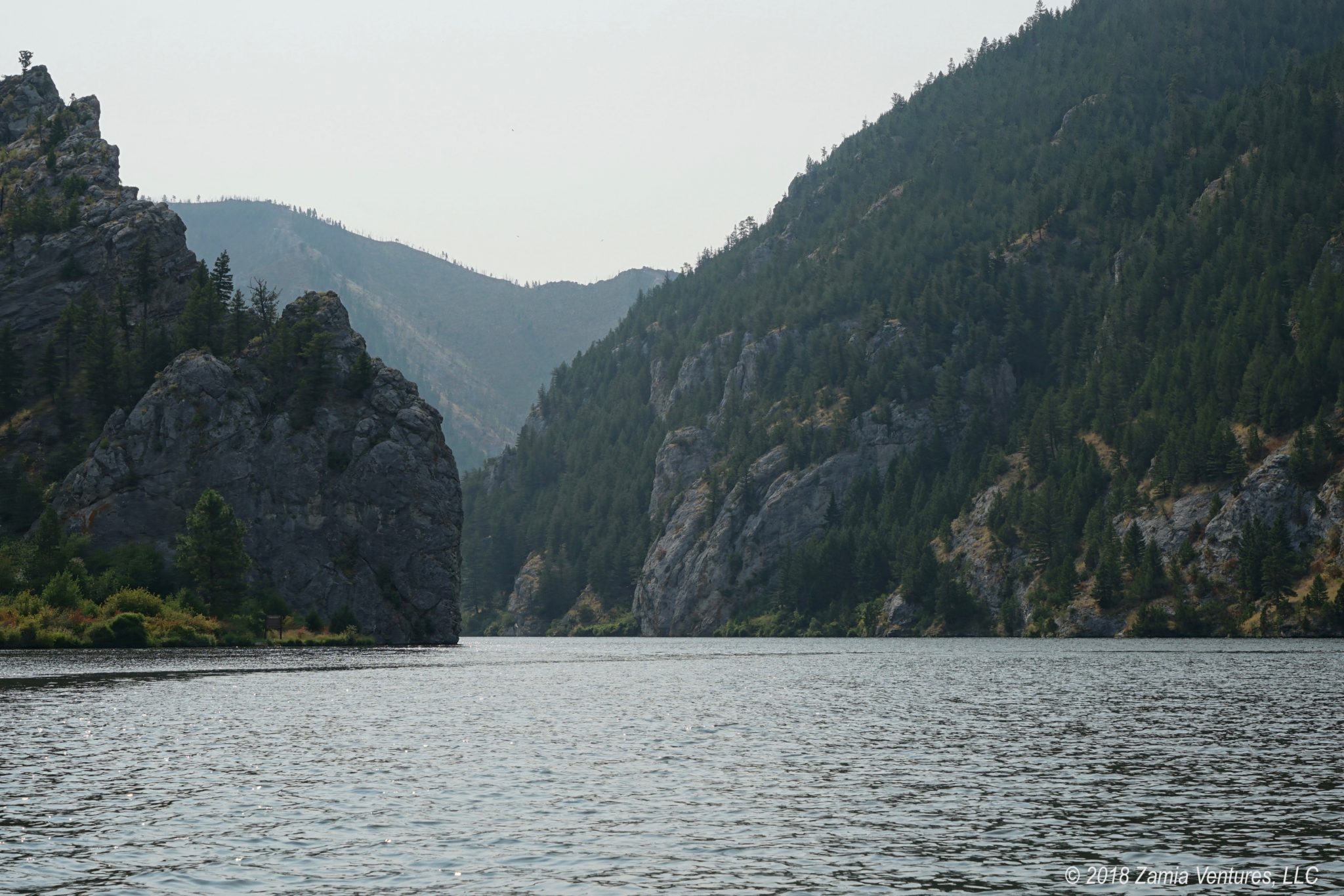 We first selected the Lewis & Clark Historic Trail as our general guideline for our 2018 travels with nothing more than a vague recollection of these figures from our American history classes decades ago. A quick glance at the trail map showed a route through plenty of states that were completely new to us, like the Dakotas. The detailed, analytical conversation that resulted in us settling on this route went something like this:

Ken: Maybe we should do Lewis & Clark.

Me: Sounds great! Let’s do it!

One of the things that has become increasingly apparent as we traveled across the northern Great Plains is that the Lewis & Clark legacy still resonates strongly. Virtually every state along the route from Missouri to Oregon has a Lewis & Clark State Park, but so far we’ve only stayed at one (in North Dakota). You can imagine how much confusion this could add to trip planning. 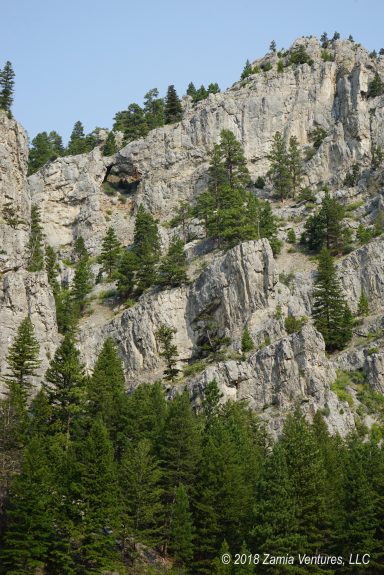 Check out the natural arch at top left 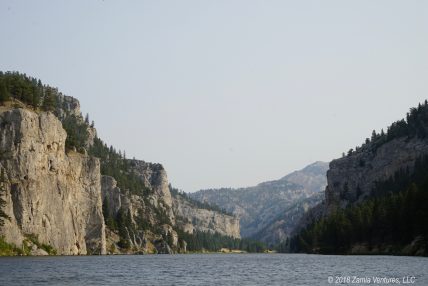 Southern entrance to Gates of the Mountains canyon 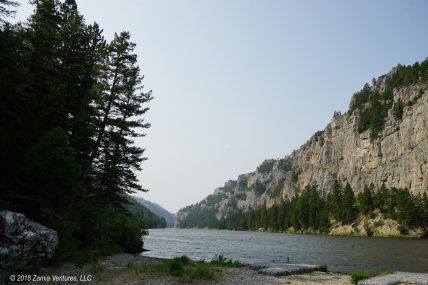 Beyond the camping locations, we’ve visited countless museums devoted exclusively or significantly to Lewis & Clark, such as in Louisville, St. Louis, and Sioux City, and we’ve also rowed and hiked in the route taken by the Corps of Discovery. Helena is the last place that we’ll be seeing echoes of that famous journey for a while, since we’ll be spending the next six weeks in Yellowstone National Park, southern Idaho, and eastern Oregon. Coincidentally, our visit to Helena has also featured what is quite possibly the greatest density of Lewis & Clark references in America.

Gates of the Mountains

The most popular attraction in Helena, at least according to Trip Advisor, is the Gates of the Mountains. This is an area where the Missouri River flows through a narrow and scenic canyon, which was remarked upon in the expedition journals and given a fanciful name by Meriwether Lewis. We took part in our own replica of the Lewis & Clark experience by taking a 2-hour boat tour of the canyon in a nice open-top boat. Happily, no rowing was involved.

Formidable limestone cliffs rise on both sides of the narrow canyon. As the river snakes around, there are sections where it appears that the river disappears completely into impenetrable cliffs, only to have the narrow, winding channel revealed when the boat approaches the corner. Lewis named the area the Gates of the Mountains from his impression of heavy gates slowly sliding open, as pictured at the top of this post. Captain Brian did double duty as both the boat captain and a very knowledgeable tour guide, providing lots of information about plants and animals that inhabit the canyon, Native American pictographs found on the cliffs alongside the river, and, of course, the Corps of Discovery. 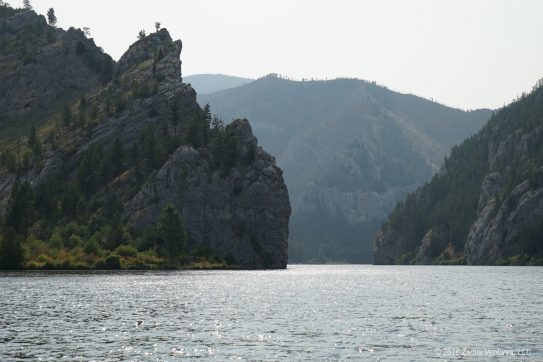 The gates are open! 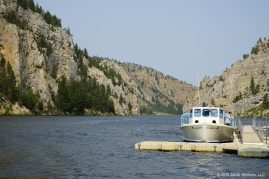 Our tour boat and captain 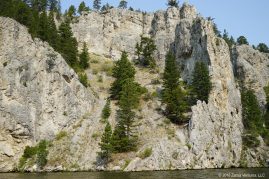 One of the gulches in the canyon that leads down to the river was the site of the 1949 Mann Gulch Fire, which cost the lives of 13 smokejumpers and was a seminal event in improving training and equipment for wildland firefighters. We had learned a bit about the Mann Gulch Fire during our visit to the smokejumper base in Missoula, but Captain Brian brought the story to life with the riveting tale of how the few survivors made it out alive. Seeing the extremely difficult terrain in person made us really appreciate the challenge the firefighters faced when the fire blew up and cut off their main escape route to the river.

On the return trip, the boat made a short stop at a day use area called the Meriwether picnic area named after (who else?) Meriwether Lewis. Ken noshed on ripe chokeberries and I watched the soaring birds. This boat trip was a fun and informative way to spend a morning getting a final taste of Lewis & Clark history and scenery before we take a break from the L&C trail. 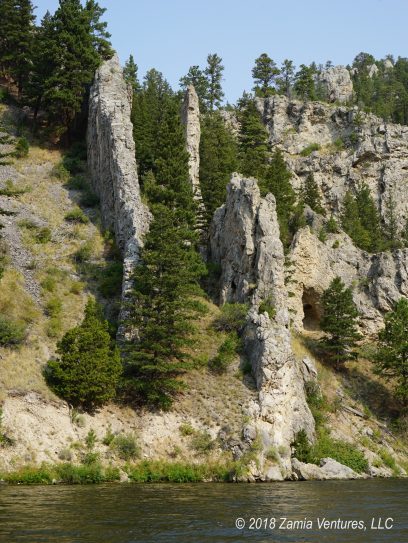 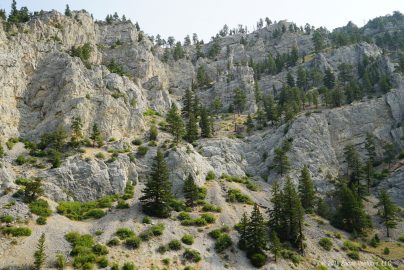 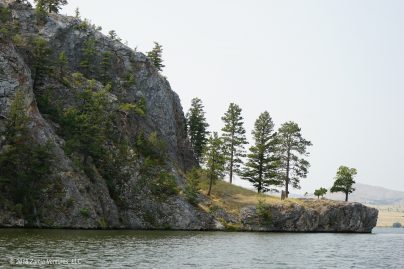 Our other main goal in Helena was to visit Lewis & Clark Brewing Company. We initially bought their beer at retail when we were east of Glacier National Park, and, candidly, we selected it almost entirely because of the name. It turned out that we really enjoyed the products, so during our stay in Helena we made sure to visit the tap room to get the full tasting experience. 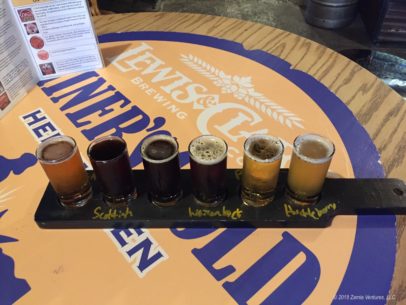 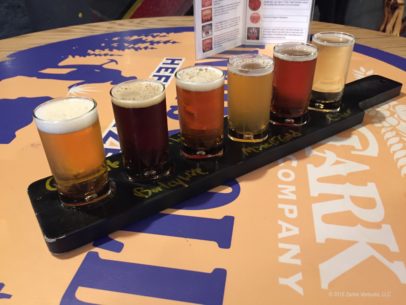 Our two flights of 12 total beverages ran the gamut from cider and a too-fruity huckleberry beer to a few varieties of those smooth, dark porters and stouts we love so much. It may just be our perception, but it seems that early craft breweries went a little crazy with extra-hoppy IPAs, to the point where the beers became unappealing to the casual drinker. While there are a few Montana breweries that that have extremely bold and bitter IPAs, especially using Citra hops, we’ve loved the wide variety of less bitter options offered at the places we’ve visited. At Lewis & Clark, their Tumbleweed IPA was a bitter outlier in a lineup where the real standouts were much more approachable; Prickly Pear Ale, Pompey’s Pilsner, Back Country Scottish Ale, and Celebrate Montana Porter were all great. The brewery doesn’t offer tours, but we liked the setup that allowed us to see the product being made behind large glass windows. 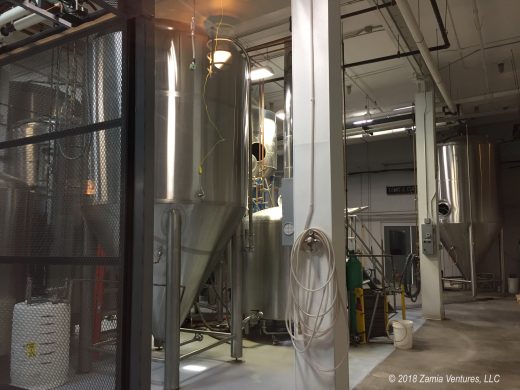 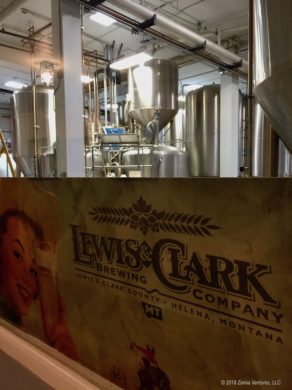 During our stint in Helena, our home was parked in a great little campground on Bureau of Land Management land overlooking the Missouri River about 10 miles south of the Gates of the Mountains.

You would think that with all that open sky, we would have enjoyed plenty of solar power generation. Well, that was only true after two days of persistent rain and cold weather. When the high was only 62 degrees, I fell back on my patented house-heating method of making fresh bread and soup for dinner. It’s hard to believe that less than two weeks ago we were battling temperatures above 100 degrees, and we haven’t really moved far (around 150 miles). At least we had the chance to pull out our generator and make sure it still works before we head into Yellowstone and the Tetons. It had been patiently waiting in the bed of the truck since April for just such an occasion.

Up next: a week in Bozeman, and then we finally say goodbye to Montana.