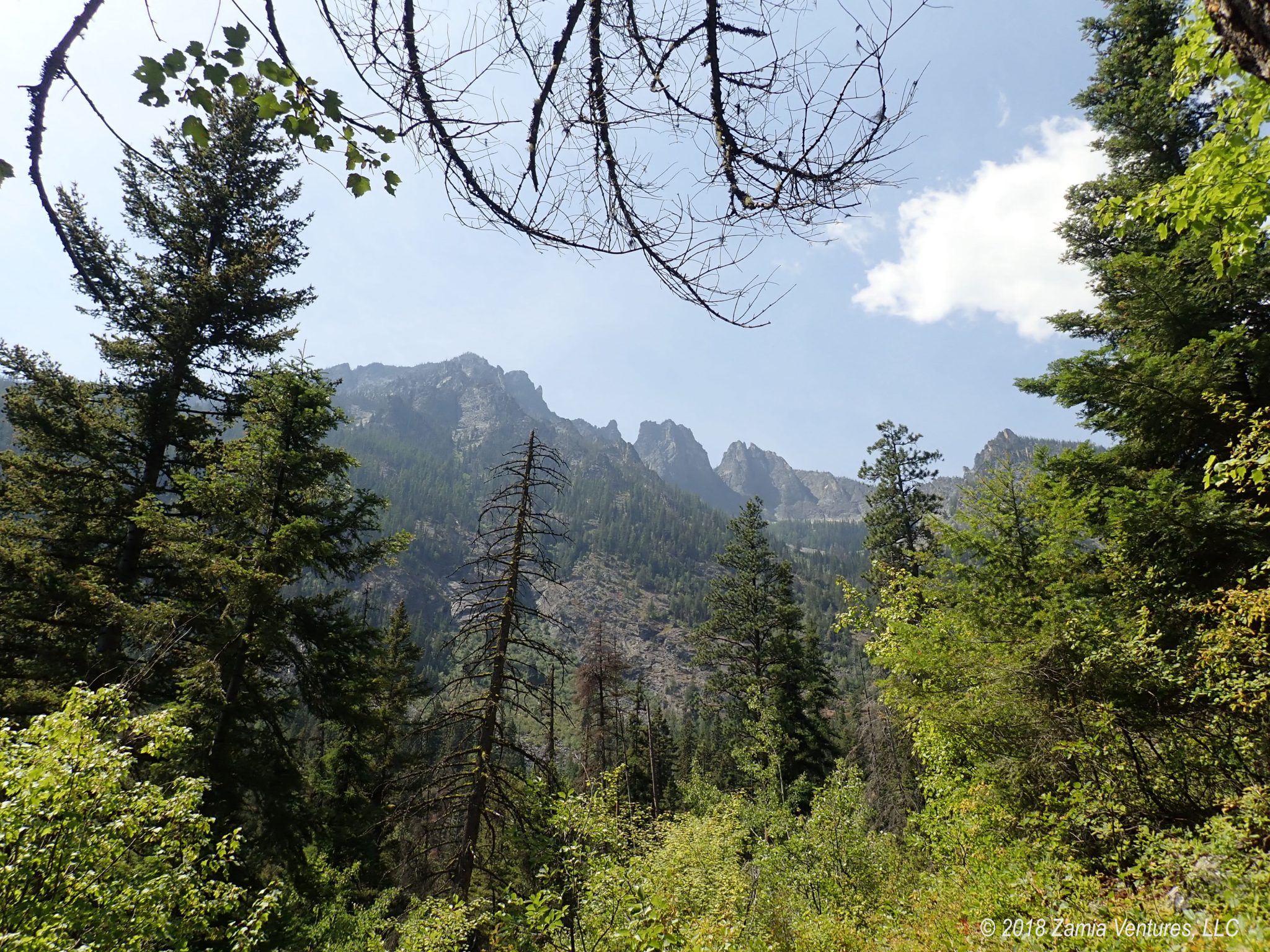 After our busy week in Missoula, it was time to recover from all the excitement and also to work off some of the beer. We relocated a very short distance southwest into the Bitterroot National Forest, to a lovely campground situated alongside a burbling creek. This was a welcome change from the road noise and screeching train noise that permeated our more urban campground in Missoula. The only downside: temperatures reaching into the 90s and even the 100s during our stay. And of course, there are no hookups in national forest campgrounds, so we were without the benefit of air conditioning. Jumping into that creek was sounding better and better all the time.

Lewis & Clark in the Bitterroots

When planning our 2018 trip, with the loose theme of following the Lewis & Clark National Historic Trail, we knew that we would need to spend some time in the Bitterroot Mountains. Similar to our interest in spending (a tiny amount of) time testing ourselves with paddles on the Missouri, hiking in the forbidding Bitterroot Range is part of experiencing a small fraction of the adventure of the Corps of Discovery. In the westward journey, the expedition reached the headwaters of the Missouri River near Bozeman in August 1805. At that point, all hope of finding an all-water route across the country via the Missouri was dashed, since they were facing a formidable wall of mountains to the west. Now traveling overland on horses purchased from the Shoshone tribe — thanks to the presence of Sacajawea — the group camped at Traveler’s Rest just west of the present-day town of Lolo, Montana and then tackled the crossing of the Bitterroot Range. They were led by a member of the Shoshone tribe along the Lolo Trail, which had been used by hundreds of years by the Salish, Nez Perce, and other nearby tribes for trade and travel between the Columbia River basin and the northern Great Plains.

The journey across the Bitterroots took 12 long days in September 1805, and it nearly killed the entire group. An early snow made travel difficult, and also drove most of the large game animals to lower elevations. For a group of a few dozen people accustomed to hunting (and eating) upwards of 5 pounds of meat per person per day, the absence of game was catastrophic. The expedition survived, but only barely, by eating their horses and even their tallow candles. They were in incredibly poor shape when they reached the western edge of the mountains and encountered the Nez Perce tribe. The situation was made even worse when the famished members of the Corps gorged themselves on tough root vegetables, leaving many in acute intestinal distress. Members of the tribe nursed the weakened explorers back to health, one of many instances of the success of the expedition depending entirely on the goodwill of local inhabitants.

So for some reason we decided that the place that nearly killed off the Lewis & Clark Expedition — a group we readily acknowledge is far, far tougher than us — was a place we should go hiking. The only reason this makes sense is that we followed well-worn trails and returned each night to our trailer to consume gourmet meals. For the most part we stuck within our comfort zone of hikes in the 7-10 mile range, challenging ourselves with moderate elevation change. We tackled the Bass Creek Trail and the Larry Creek Trail right from our campground, which was a nice change from all the driving we did during our week in Missoula. 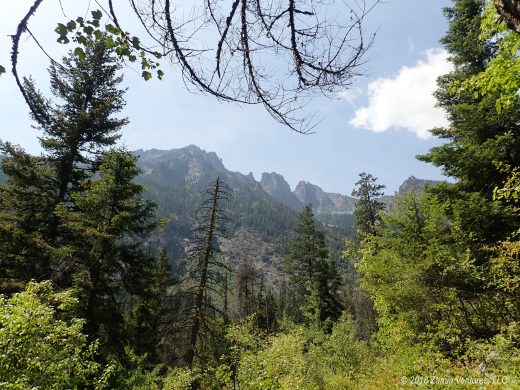 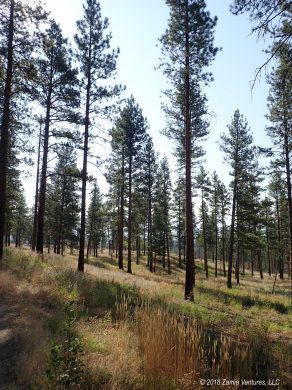 We also took a day to drive west along Route 12, which follows the valley below the Lolo Trail, to the Lolo Pass Visitor Center at the Idaho border. This multi-purpose facility combines a typical state welcome center with a small interpretive are focused on the native peoples of the region, Lewis & Clark, and the ecology of the Bitterroots. The small outdoor nature trail highlights the significance of wetlands in the ecosystem, which I found interesting. It had truly never occurred to me that swamps could exist at high elevation, but they do!

I also enjoyed learning about some of the birds and plants that were first scientifically described by Lewis & Clark, so that we can keep an eye out for them. Naturally, there is a Lewis & Clark video on continuous loop as well, which we did not watch in detail. We are getting to the point where we could produce one ourselves from memory. 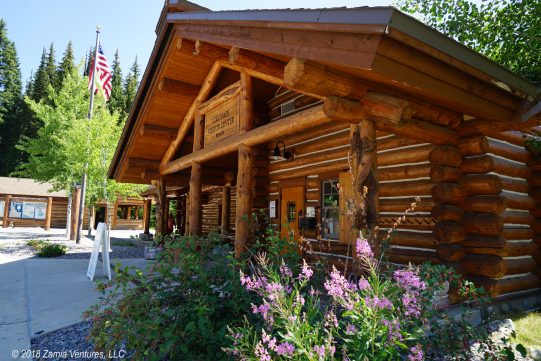 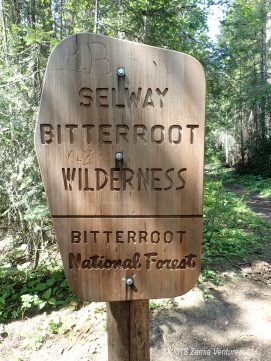 On one of our hikes out of the campground we were intercepted by a University of Montana graduate student doing a survey about uses and perceptions of wilderness, specifically in connection with the interpretation of the Wilderness Act adopted in 1964. Of course we both participated in the survey. Since I am a giant nerd, I actually read the act and was impressed by its soaring rhetoric. Trust me when I tell you that most land use regulations are not filled with inspirational and evocative language.

We had already encountered the weird patchwork of federal ownership and administration of public lands during our travels. National parks and the several hundred historical sites are administered by the National Park Service, a division of the U.S. Department of the Interior, while national forests are run by the U.S. Department of Agriculture. These different departments have very different missions for land management: parks are maintained in a relatively pristine state while forests are regularly logged, hunted, and otherwise exploited for natural resources.

The “wilderness” designation authorized by the Wilderness Act adds yet another layer of conservation requirements for wilderness lands, which can be imposed on all sorts of lands owned by the federal government. Once federal land is designated as a wilderness — after being nominated by the agency that owns the land and authorized by an act of Congress — the land must be preserved in perpetuity as “an area where the earth and its community of life are untrammeled by man, where man himself is a visitor who does not remain.” Wilderness areas must be kept free from roads and all mechanized vehicles, for example.

This act raised several interesting questions, which we enjoyed debating during our hikes and back at camp. One obvious question is why an agency would choose to have its lands designated as wilderness. Once this happens, the agency loses all flexibility to allow future natural resource exploitation. Would an agency request the designation because the current regime does not trust its successors? Is it a sort of institutional commitment device, preventing future generations from the temptation of developing these areas? 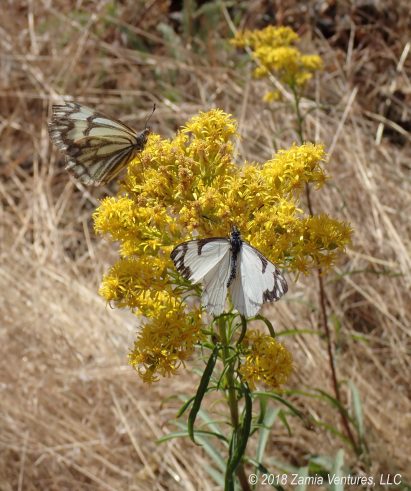 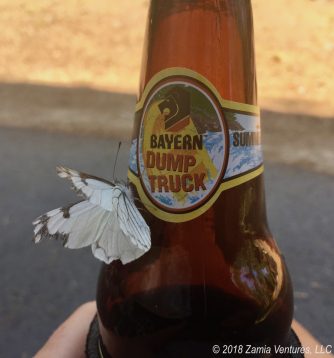 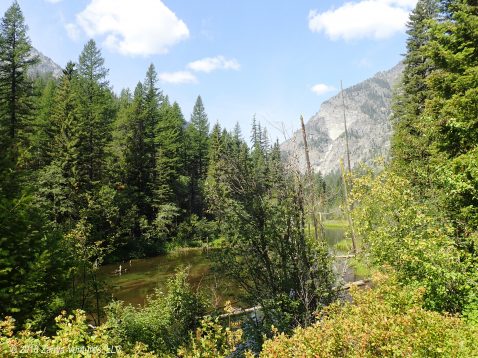 The specific topic being researched by the UM graduate student was users’ perceptions of what is involved in “a primitive and unconfined type of recreation,” which is one of the criteria for designating land as wilderness. We found it a little ironic that “unconfined” recreation would be subject to a litany of restrictions in wilderness areas, including prohibitions on bicycles, campfires, and hiking off the designated trails.

It was also interesting to me that the Selway-Bitterroot Wilderness includes areas that were part of the historic home range of several different native tribes. It’s hard to see how an area that’s been inhabited for hundreds of years could be “affected primarily by the forces of nature, with the imprint of man’s work substantially unnoticeable.” The cynical view, of course, is that Native Americans were not viewed as “man” by the administrators who identified this area as wilderness. A more charitable view is that Native Americans worked with nature, not against it, so their activities like using fire to open up pasture areas in the forest closely resembled natural processes and did not change the fundamentally wild character of the place.

In any event, we spent the week camped in a lovely creekside national forest campground, where we enjoyed an enormous site and the pleasure of paying just $10 per night. The whole forest, including our campsite, was alive with white butterflies that obviously had no fear at all, landing on us any time we sat outside! The only challenge was dealing with unusually hot weather, with temperatures reaching into the 90s just about every day. It was pretty strange to wake up at 50 degrees and prepare for a 40 degree temperature swing during the day, but I think we have mostly mastered the art of layering. Next we have planned a short stay in a different area of the Bitterroots, before we dip back into more urban life when we swing through Butte, Helena, and Bozeman.

5 thoughts on “Examining Wilderness in the Bitterroot National Forest”