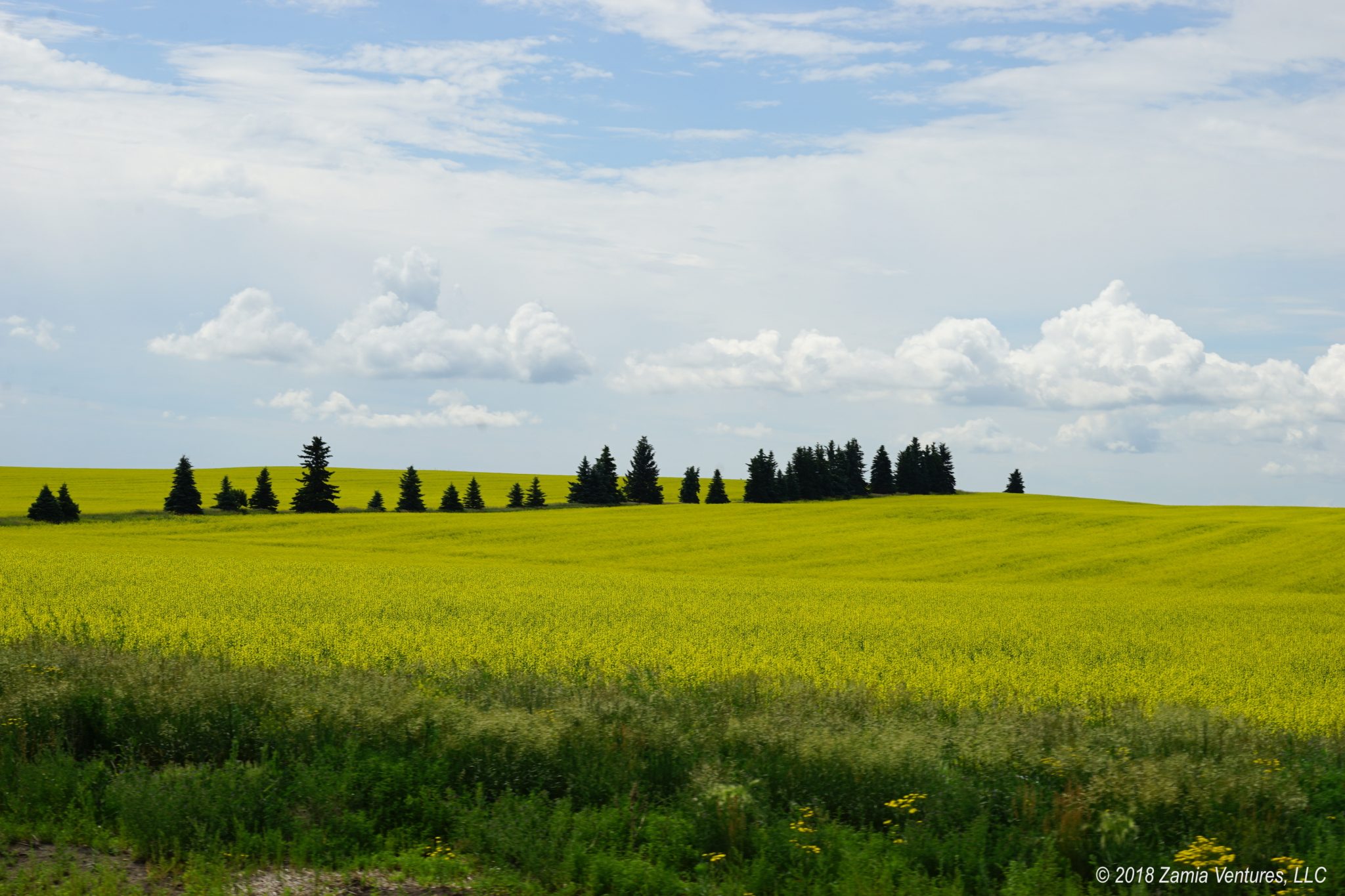 Our route from Theodore Roosevelt National Park took us north to Williston, ND for two reasons. First, it was time to return to the Mighty Missouri and the Lewis & Clark Trail to continue our westward trek after our month-long sojourn in the South Dakota Badlands, the Black Hills, Devils Tower, and the North Dakota Badlands. Second, Williston is one of the larger cities in North Dakota and we knew we would have good internet access and ample opportunity to stock up on groceries and supplies. Our time in this corner of the state ended up being very much a mixed bag.

The main reason for Williston’s size (and range of stores) is the North Dakota oil boom of the last decade.  Williston sits smack in the middle of the Bakken formation, a layer of shale rock that is basically impregnated with oil. The oily properties of the rock have been known for a long time. The dinosaur/geology/history museum in Dickinson, ND explained that early pioneers who used the local shale to make fireplaces quickly discovered that they had inadvertently turned their cabins into incendiary devices. However, it was only in the early 2000s that extracting the oil from the shale rock became commercially viable thanks to the new technology of fracking. 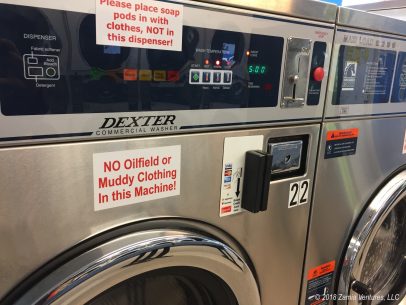 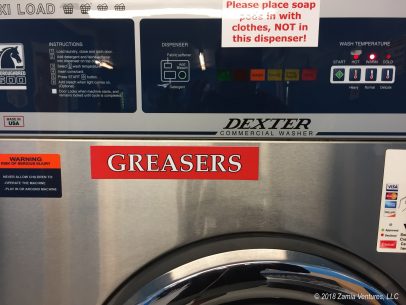 The result has been a massive growth in the energy sector in this previously-sleepy corner of the state. For the past decade, North Dakota’s unemployment has been far below the national average. A few things this means, from a practical perspective:

The most overwhelming aspect, for us, was the sheer volume of oil wells that cover the landscape. Bucolic scenes of open fields dotted with cattle are hard to come by in this part of the state; the top photo in the post is mainly the result of clever cropping. Instead, there is literally a small oil well every 100 yards in every direction as far as the eye can see. One of the most obvious signs of an active well, besides the rhythmic movement of the pumpjack, is the presence of a permanent fire. Natural gas emerges from the wells in addition to oil, and wells not connected to a gas pipeline — which is virtually all of them here — vent the gas out and set it on fire.

The first few oil wells (with fires) were an interesting diversion for us. The flame is sort of like a miniature Olympic torch. How festive! But after seeing several hundred, the feel of the landscape is less “international friendship games” and more “fires of Mordor.”

The sheer volume of wells, plus the dense concentration of industrial services supporting the wells, makes for an overall ambiance that is not particularly attractive. In addition to contributing to a fiery, industrial appearance and constantly belching smoke and hydrocarbons into the air, the perpetual flames are also diminishing one of North Dakota’s best environmental assets: its dark night skies.

At the same time, this area is obviously economically productive, and the residents we met seem pleased to finally be able to enjoy stores, restaurants, and other trappings of larger towns. The town of Williston proudly claims to have the highest median household income in South Dakota, at over $100,000 per year, which is certainly higher than any place I’ve ever lived. The wealth generated by the oil boom is evident; there’s a late model truck and a new RV in front of virtually every home.

We support American industry all the way, and the U.S. energy independence afforded by fracking is incredibly helpful for our foreign policy. But we were left feeling very ambivalent about how the energy industry has changed this corner of rural America.

Our campsite during our stay was at Lewis & Clark State Park — one of about 8 parks in different states to carry that name. We were happy to be back on the water, in a park located on the banks of Lake Sakakawea. While the park itself was not exceptional, one of the highlights of our stay was finding a robin’s nest with two chicks in the tree just outside our trailer door. We enjoyed watching the robin parents diligently procure insects, worms and other delicacies to feed the growing chicks. And unlike baby blue jays, baby robins know how to keep quiet, so they make great neighbors!

And then, on the last night we were staying in the park, we had an episode of Wild Kingdom unfold in front of our eyes. We were alerted to the situation by about a dozen robins flying and hopping around on the ground just outside our trailer, squawking with an unusual ferocity. It took a little while to determine the cause, but we soon realized the problem: a large snake was in the tree next to our trailer, attacking the robin nest. Sadly, it claimed at least one victim. We had front row seats to watch the snake consume one of the robin chicks, since it happened just feet from the door of our trailer. The second chick escaped from the nest, making it down to the ground and skittering underneath our trailer, but we were unable to find it after all the excitement died down. 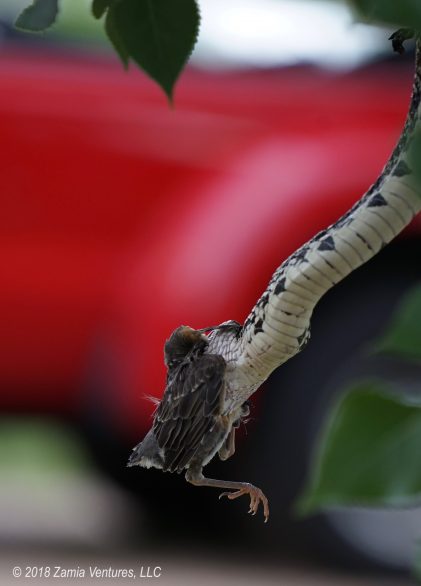 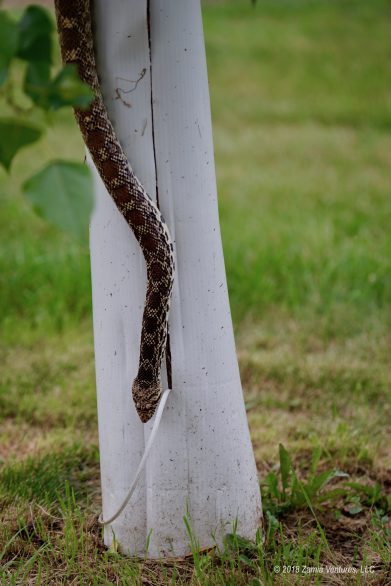 And there was a lot of excitement! The noise of the frantic robins attracted some attention from neighboring campers, but I probably contributed by hanging out the door of our trailer with my big zoom lens in an effort to get shots of the gruesome display. We soon had a big crowd gathered around us, including a bevy of small kids who were both fascinated and repulsed by the whole scene. Well, they were mostly fascinated but also happy to shriek at random intervals. A neighbor advised us that the snake was either a rattlesnake or a bullsnake which “are not poisonous, but they still bite.” Reassuring.

After consuming the baby bird, the snake slithered down the tree trunk and then, with a ridiculously full belly, wandered around our campsite like an aimless drunk while various of our neighbors alternately tried to get close and run away. I was just busy taking photos and enjoying watching my own personal Wild Kingdom show. A resourceful person managed to get the attention of one of the park rangers, who took one look at the snake and called his roommate (another ranger) who was reportedly trained in snake wrangling. The two of them managed to capture the snake — confirmed by the snake expert to be the nonvenomous bullsnake — and stuff its 5+ feet of length into a plastic toolbox for relocation elsewhere in the park. 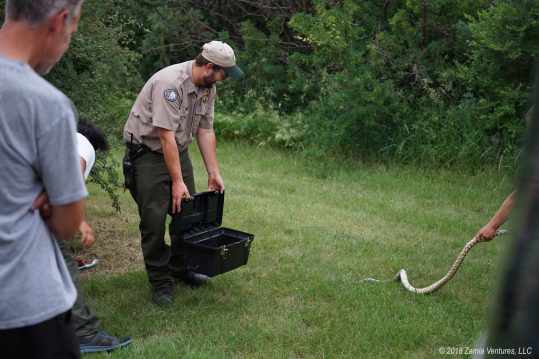 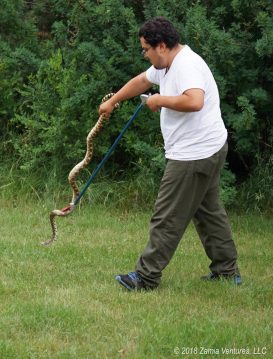 Roommate to the rescue!

Needless to say, we were impressed, but also pretty shaken by the sudden destruction of the robin family that we’d been watching. I like reptiles and I understand that snakes have to eat, but it was still a sad event that added to our ambivalence about the whole area.

Our very last stop in North Dakota was at Fort Union Trading Post, a national historic site located on the present-day border with Montana near the confluence of the Yellowstone and Missouri Rivers. It literally straddles the state border, with the historic site located in North Dakota and the parking lot located in Montana. The post was built and operated by John Jacob Astor’s American Fur Company, and its sole purpose was to trade with Native Americans from the Upper Missouri River region to obtain pelts. Despite having “fort” in the name, this was never a military outpost. Instead, for almost 40 years it was the most important trading center in the Upper Missouri.

In a sense this outpost implemented a key part of Thomas Jefferson’s vision when he commissioned the Corps of Discovery. Jefferson believed that American control over its western lands would be based on a foundation of commerce with the Native American inhabitants, so Lewis & Clark were charged with spreading the message of peaceful trade and companies like the American Fur Company were encouraged to earn the loyalty of the tribes by forging mutually beneficial commercial ties. 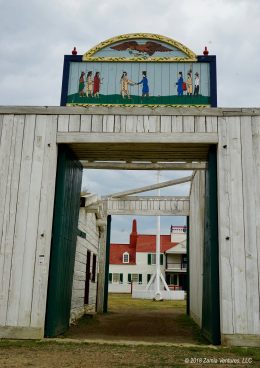 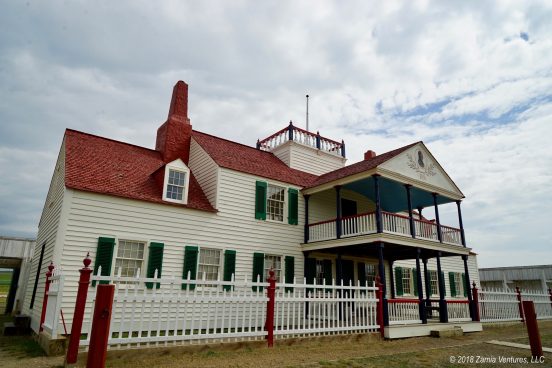 Home of the head trading agent 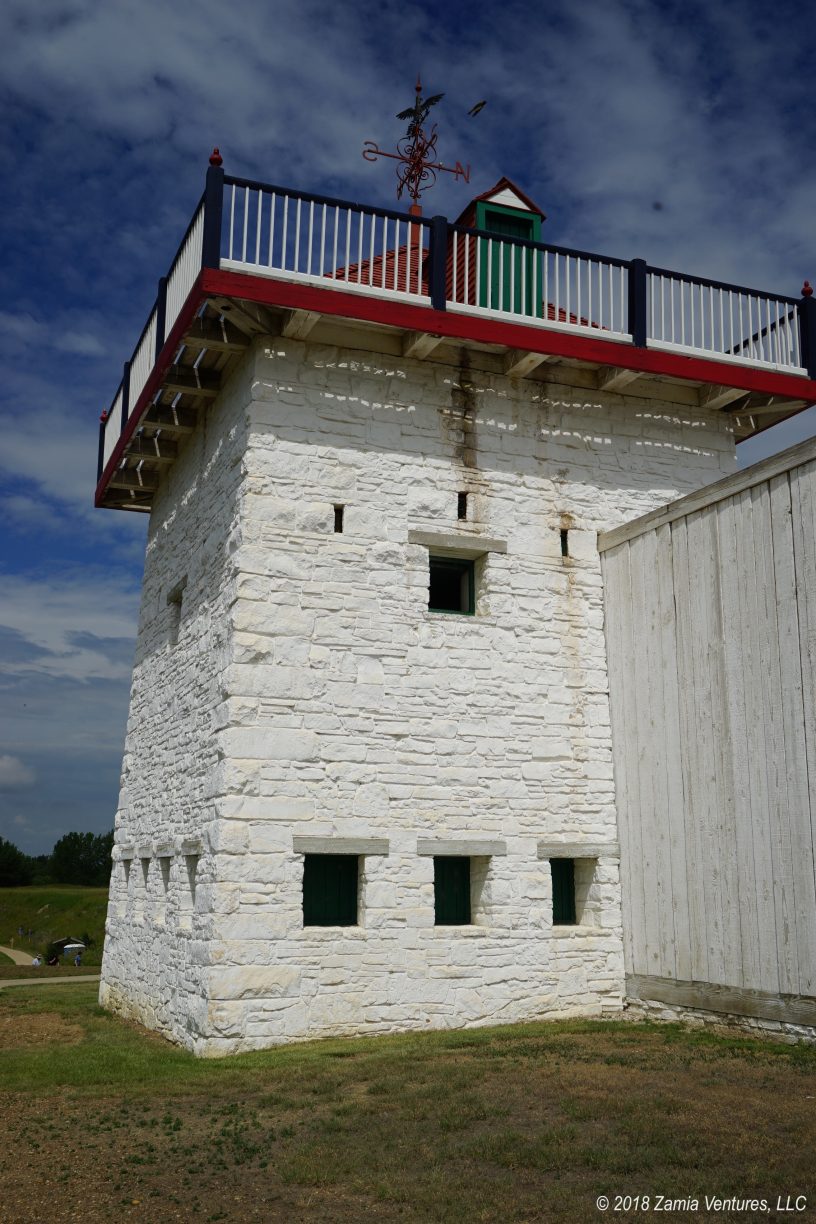 Despite the hopeful, pro-enterprise message, we didn’t particularly love our visit. First and foremost, the entire site is inhabited by some of the most aggressive and irritating mosquitoes we’ve ever encountered. And we are from South Florida, an area that is notorious for its ravenous mosquitoes! The park ranger on duty in the front trading area joked about how the mosquitoes are famous, thanks to their prominence in the expedition journals kept by Lewis & Clark. We dutifully chuckled while continuing to slap ourselves about the head and neck like mad fools.

“I have a verry Sore Throat, & am Tormented with Musquetors & Small ticks.”

-Journal of William Clark, June 3, 1804, and practically every other day also

The other major drawback to the site, in my view, is that it is 100% a reconstruction of the 19th century buildings. The original fort was torn down in 1867, with usable components recycled into the construction of a nearby military outpost at Fort Buford. The site (consisting solely of archeological resources) was designated as a historic landmark a century later in 1966, but it was not until 1985 that funds were appropriated for reconstruction of the structures. Even though the reconstruction was done using period equipment and materials, with good archaeological information about the building dimensions and plenty of contemporary drawings and artwork to guide the project, at the end of the day it felt more like a movie set than a historical site. The fact that the park rangers are all dressed in 19th century garb didn’t help matters at all.

Nonetheless, we were glad to visit yet another National Park Service unit that helped expand our knowledge and appreciation for American frontier history. Despite the mosquitoes, it’s good to be back on the Missouri with our rig pointed west.

9 thoughts on “Ambivalent End to Our Dakotas Experience”