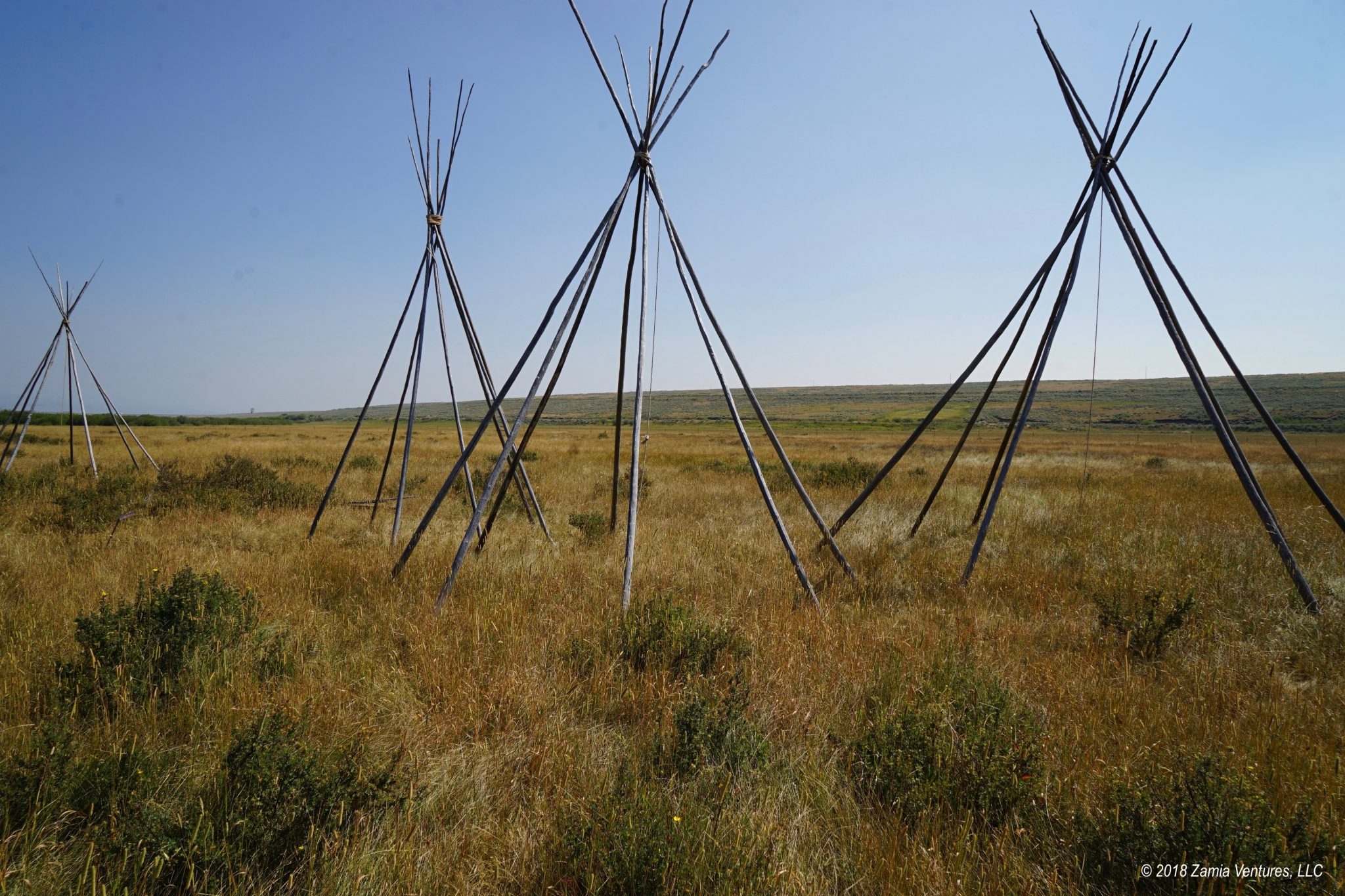 We finished off our time in far western Montana with a short stopover in the very southern end of the Bitterroot Valley, at another national forest campground located along the East Fork of the Bitterroot River. Our main goals were more hiking and more R&R before hitting another stretch of urban visits. Goals achieved! 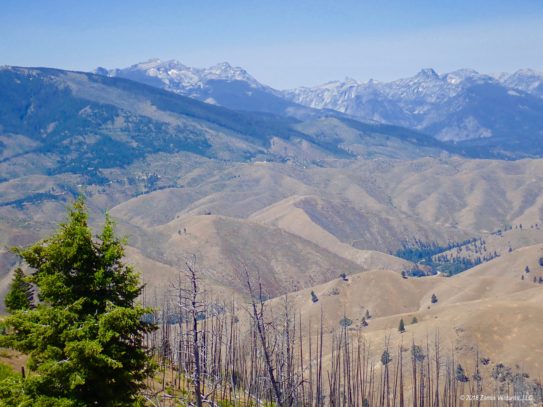 Snowcapped peaks in the distance were a surprise in mid-August 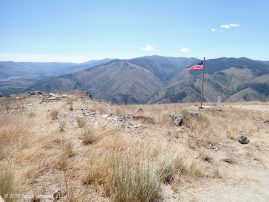 Flag posted at the fire lookout shows the persistent wind 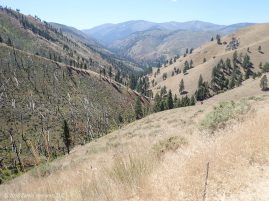 Looking down the valley we hiked up

A tough hike to the fire lookout post atop Sula Peak was our biggest hike in the southern Bitterroots. I won’t bother with a blow-by-blow description of the this hike. Suffice it to say that it was basically straight up for several hours (4 miles) and it was not clear we would make it to the top. And we had no one to blame but ourselves — there was no deceptively friendly park ranger giving us bad advice. But we persisted and ultimately were rewarded with panoramic views of this rugged landscape. Also, we encountered zero other hikers along the way, which is pretty much the optimal number. 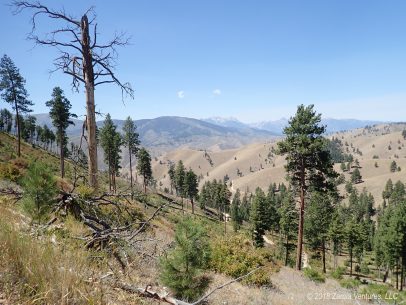 Typical view from our hike 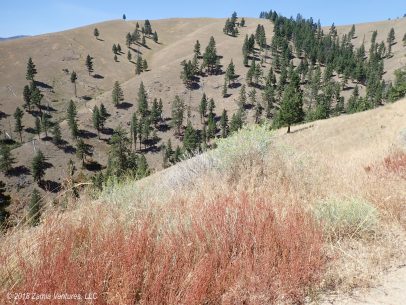 Mountainsides are brown and dried out in late summer

The brown grass everywhere, along with the insistent fire warnings and restrictions posted on all the public lands we visited, was a reminder that this climate is extremely hot and dry during the summer, despite overnight temperatures in the 40s. Meanwhile, our camping spot at Spring Gulch, another quiet, creekside campground, afforded us plenty of time to read and, in my case, catch up on podcasts.

Our other notable activity in the area was a day trip to the Big Hole National Battlefield, where we finally checked another National Park Service unit off our list. It had been too long since we had seen that familiar brown sign with the bison, pine tree, and mountain! This location is part of the very extensive Nez Perce National Historic Park, with 38 separate sites commemorating one of the last free tribes in the U.S.

In some respects, the story of the Nez Perce is similar to the story of the Creek Nation that we encountered at the Horseshoe Bend National Military Park in Alabama. The events leading up to the battle started with a schism within the tribe. Unlike the Creek Civil War, however, the Nez Perce internal conflict was directly caused by the intervention of the U.S. government. Under an 1855 treaty, the U.S. established a reservation for the very large Nez Perce tribe which was limited to about half their original range. But once gold was discovered within the reservation in 1863, the U.S. retraded the deal and proposed a new reservation – one that decreased the already-limited land area of the reservation by over 90 percent.

“I have asked some of the great white chiefs where they get their authority to say to the Indian that he shall stay in one place, while he sees white men going where they please. They cannot tell me.” – Chief Joseph

The bands whose home territory fell within the newly proposed reservation boundaries went ahead and signed the new treaty. The bands who would be losing all rights to their ancestral territory and would be forced to move were, unsurprisingly, much less enthusiastic about the new deal. These bands refused to sign the treaty and stayed put. In 1877, the U.S. government established a deadline for all Nez Perce to relocate into the tiny new reservation area. As the deadline approached, a substantial group of the “non-treaty” bands chose to flee. 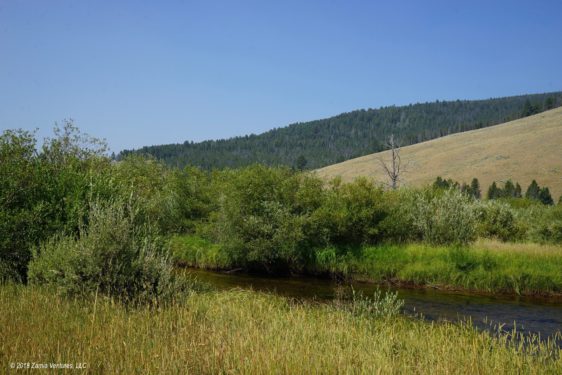 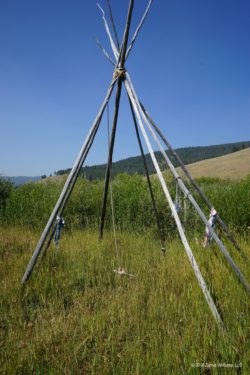 Tipi in memory of Chief Joseph, with prayer offerings

The non-treaty bands made their way across the forbidding Bitterroot Range using the Lolo Trail, then traveled down the Bitterroot Valley. After a final push over what is now called Chief Joseph Pass, the community of around 800 people found respite at the Big Hole. This flat valley offered a meandering river, ample grass for grazing the 2000+ horses in the community’s herd, and young lodgepole pines perfect for making tipi poles.

Unfortunately the community was being stalked by the U.S. 7th Cavalry, and a regiment of Army soldiers and volunteers attacked the village just before dawn on August 9, 1877. Following orders to shoot low into the tipis, since most people would still be sleeping, the soldiers and volunteers surprised the Indians and killed fairly large numbers of people, mostly women and children. The 200 or so warriors in the community eventually recovered from the surprise attack and launched a counterattack, pinning down the soldiers and capturing the one Howitzer gun. They were able to provide covering fire as the non-combatants returned to the village, packed up their remaining belongings, and continued the long journey toward a safe haven with their allies, the Crow, or in Canada.

By early October, after a grueling 4-month journey across 1,170 miles, the surviving tribe members found themselves in northern Montana, just 40 miles from the Canadian border, beset by snow and soldiers while suffering from cold and hunger. A small group of agile warriors was able to make the final push to Canada, but Chief Joseph knew that surrender was the only option for the 400 remaining women, children, and elderly. The only term of surrender was that the Nez Perce would be allowed to return to their reservation in Idaho. Adding insult to injury, the U.S. government shipped the whole lot to Oklahoma, where half the people perished. The survivors were finally allowed to return home eight years later in 1885, ending yet another chapter in the sordid history of U.S. federal government treatment of Native Americans.

The Big Hole Battlefield has been preserved much like Horseshoe Bend, with just enough signage and interpretation to allow visitors to imagine the terrible event it commemorates. The most evocative element of the site is the tipi poles erected on the site of the Nez Perce encampment, alongside the peaceful river. These tipi skeletons have been placed in cooperation with the tribe, in many cases by descendants of the survivors, and they eloquently make the point that this is a graveyard for victims of a massacre.

Visiting this site highlighted the remarkable pace of transformation in the middle portion of the 19th century. In 1814, the western frontier of the United States, where pitched battles were fought with Native Americans, was in eastern Alabama. By 1877 the only remaining unconquered tribe was the Nez Perce, whose homeland was comprised of incredibly remote lands in northern Idaho.

“Treat all men alike. Give them all the same law. Give them all an even chance to live and grow … Whenever the white man treats the Indian as they treat each other, then we shall have no more wars.” – Chief Joseph

The other memorable aspect of visiting the site was its focus on peace and reconciliation. The video and other interpretive materials make clear that the site does not just commemorate the 90 Nez Perce killed in the battle. Rather, it is a memorial to all involved in the battle, including the U.S. Cavalry casualties, the wounded, and all the survivors. It points visitors toward a positive future in which the past is mourned but old wounds are healed. While I would like to think I am a forgiving person, in all honesty if I were a tribal member I would probably still be holding a grudge, over a hundred years after the events in question.

3 thoughts on “Finishing Our Exploration of the Bitterroots”