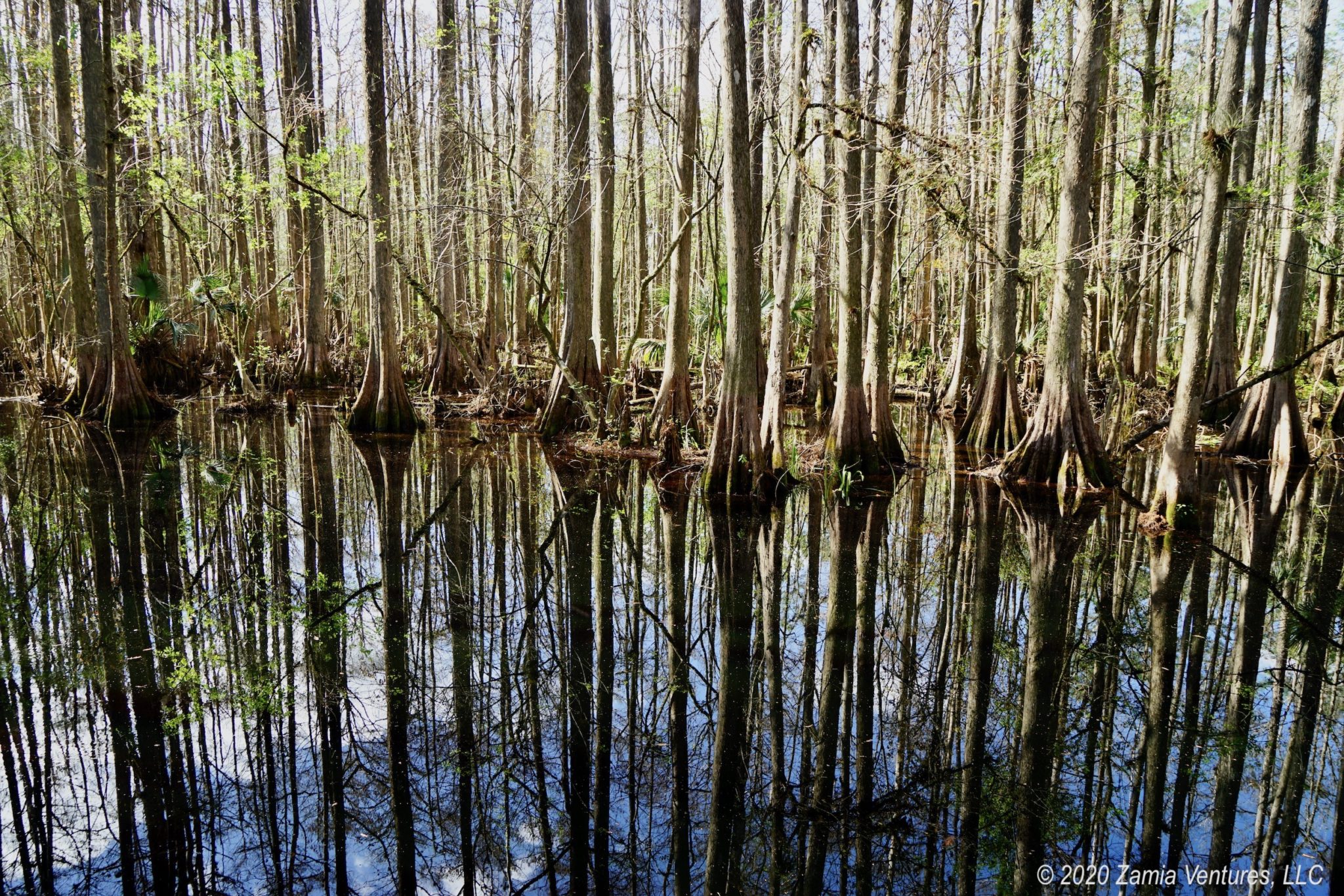 Our relocation from the Tampa Bay area to the historic inland town of Sebring was a mere 65 miles, but that was plenty of opportunity for Google Maps to attempt to kill us yet again.

We’ve had far too much experience with Google Maps encouraging us to take tiny back roads to cut a corner (and a few seconds) off our route, only to realize that the two main roads we want to travel actually have a perfectly normal intersection we could use. Before towing we always scrutinize our planned route carefully, and use digital waypoints to force the route around problematic areas. This time we failed to look closely at the final ~3 miles of our route, which were from the western side of Highlands Hammock State Park to the campground on the eastern side of the park. I mean, it’s a road through a state park to a campground — surely it would be suitable for RVs, right? Not so fast.

Our trip into the interior of the state through citrus groves and cow pastures was serene, and we were excited to see the sign for the boundary of the state park. However, we were not very pleased when, shortly after entering the state park, we saw the sign that said “Pavement ends in 500 feet.” We were even less pleased that this narrow dirt road led us to a one-lane, weight-limited bridge that from all appearances was built by the CCC almost 100 years ago, with absolutely no room to turn around. Lucky for us the posted weight limit for the bridge was 16 tons, and since we are only 6T we had no concerns about crossing the bridge. Your dastardly plans have been foiled again, Google Maps!

After arriving in one piece despite the homicidal tendencies of Google Maps, we further took our life into our hands by using our phones to direct us to some of the nearby sights and attractions.

One spot that was high on my agenda was Lake Placid, named by Reader’s Digest in 2013 as America’s Most Interesting Town. That particular honor is a bit questionable, but there’s no question the town has a fascinating history. In its earliest days the town was the southern outpost of the recreational Lake Placid Club of Lake Placid, New York which led to the copy-cat name. The warm winters and even warmer summers also made Lake Placid an ideal location for agriculture, and starting in the 1940s the town became a center for cultivation of bulb/tuber plants, notably showy tropical caladium species and lilies. I find this hard to believe, but Wikipedia tells me that 98% of the world’s caladium bulbs are grown in Lake Placid. 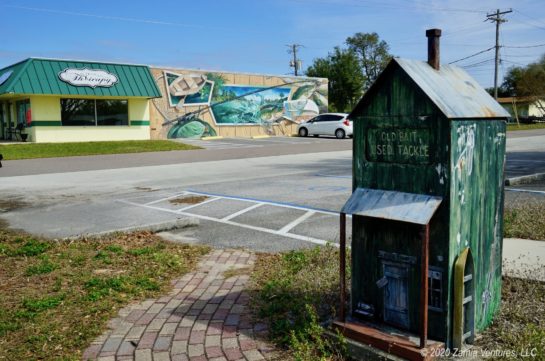 Fishing mural and matching trash can 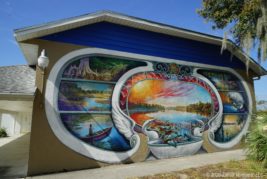 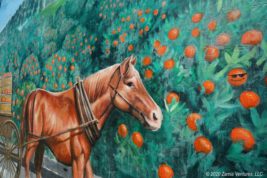 Caladium decoration on trash can

Today, this most interesting town has a population of under 2,500 people but is home to a huge summer caladium festival, close to 50 remarkable wall murals documenting the town’s history, and a clown school. I can’t make this stuff up. I visited the town with a colleague from my last job in Miami who happens to have a cute winter home in Sebring, and we focused our attention on the murals and other artsy elements of the town.

The murals all have a local angle. Some illustrate commercial activities of importance to the area, either now or in the past, like murals showing the Cracker Trail (Florida’s historic cattle drive route), harvesting turpentine from pine forests, sport fishing, cultivation of citrus groves, and fields of caladiums and lilies. Other murals focus on the natural environment of the region, with subjects like bird-watching, black bears, and the establishment of a nearby pineland research facility that pioneered controlled burns for Florida ecosystem management. Several are focused on paleontology and the early history of the region from the Ice Age though the pre-Columbian Native Americans. And several highlight community leaders like a woman who organized volunteers to serve Christmas meals to hundreds of needy people for 40+ years. 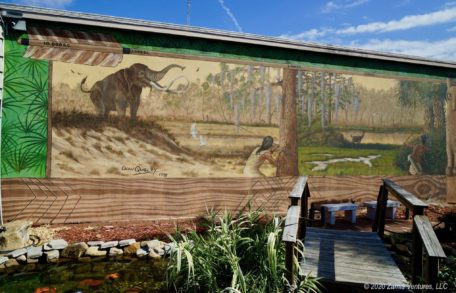 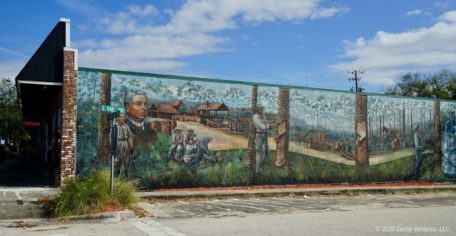 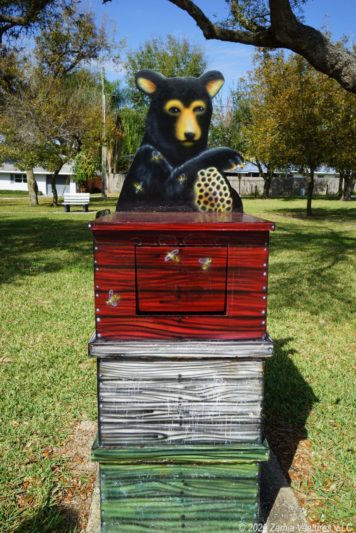 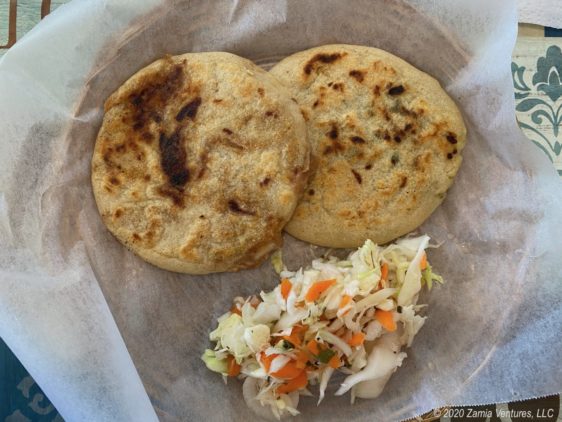 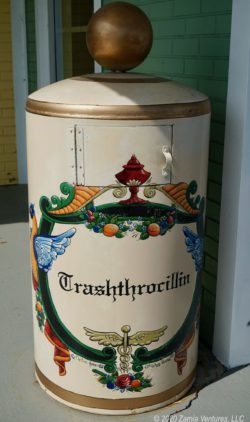 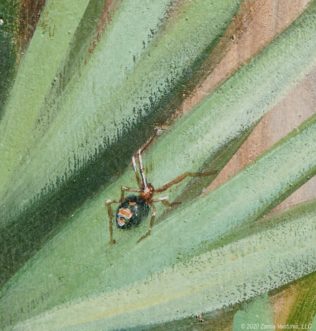 Detail of a spider 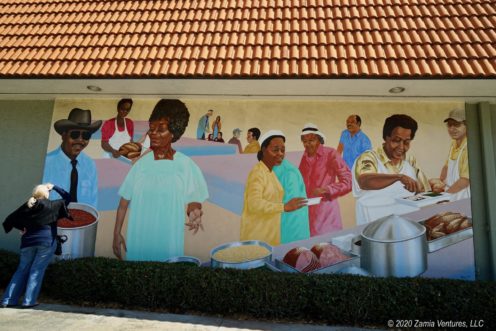 A booklet available at the Chamber of Commerce includes a map of the murals and explanations of the subjects, along with instructions to search for small or hidden objects in many of the murals (“Find two butterflies and a typewriter”). Many of the murals are accompanied by charming matching decorations on the public trash cans located nearby. After checking out the murals and getting frustrated looking for (well-) hidden objects, we consoled ourselves with a delicious lunch. We hit a new local restaurant called La Pupusa Queen for El Salvadoran cuisine, where my friend introduced me to pupusas, a classic of Salvadoran cooking. I am sure it won’t be the last time I enjoy those tasty stuffed breads. It was great to catch up with my former colleague and hear all the gossip about my former workplace, which was interesting but did nothing to make me regret my decision to resign and hit the road.

About 40 miles north of Sebring is the town of Lake Wales, home to the famous “singing tower” of Bok Tower Gardens. For some reason I always assumed that the singing tower was a weird wind-based phenomenon that served as a typical tourist trap, but I could not have been more wrong. The park’s benefactor Edward Bok wintered in the area, and in his later life wanted to create a place of beauty and serenity as a gift to the people of Florida and the US. This grateful immigrant created a botanical garden with the help of noted landscape architect Frederick Law Olmsted, Jr. (son of the designer of Central Park) which doubles as a bird sanctuary. The centerpiece of the garden is a 200-foot-tall tower, adorned with gorgeous neogothic decoration, which holds a 60-bell carillon weighing over 60 tons that is reminiscent of Bok’s home country of the Netherlands. The instrument is supplemented by perhaps the world’s largest music library devoted to the carillon, and the park’s resident carillonneurs give concerts twice daily. 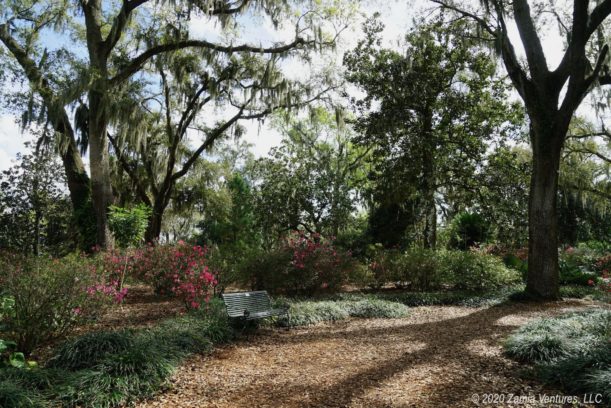 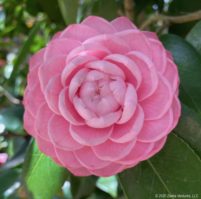 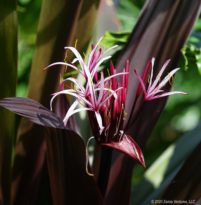 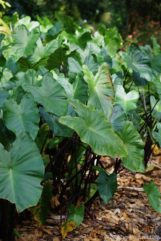 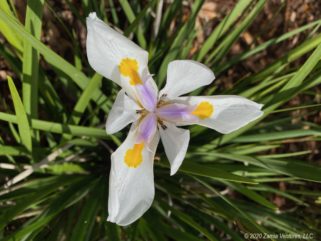 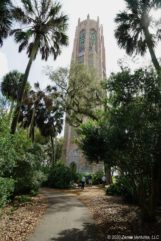 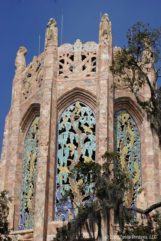 Tower includes heron sculptures and other Florida plant and animals

Learning at the visitor center 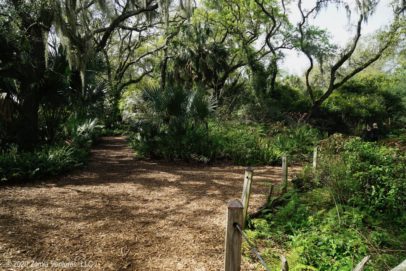 Natural areas of the botanical garden

The garden has an important program of researching and cultivating rare and endangered plants of Central Florida, but I have to admit that some of my favorite vistas included exotic charmers like camellias, azaleas, philodendrons, monstera, and birds of paradise. We were also pretty thrilled to see plenty of different specimens from the genus Zamia because, well, have you seen the name of our blog? Our visit began with the large and comprehensive visitor center, where we learned about the biology of the garden but also the artistry of the tower’s elaborate decorations, bringing Florida flora and fauna into Art Deco-styled carvings and tiles that create a highly ornamental building with an overall Gothic Revival style. Our visit finished with a lovely carillon concert that ended with a rousing rendition of the AC/DC song “Hell’s Bells.” Again, I can’t make this stuff up.

When not heading out to interesting destinations in the area we explored the lovely and historic Highlands Hammock State Park, which preserves 9,000 acres of relatively pristine old-growth Florida forest and swamp. The property was saved thanks to purchases by private citizens who also advocated for turning the land into a national park, in an inspiring example of citizen-led conservation. Although the national park designation was never granted, the park did host an encampment of the Civilian Conservation Corps (CCC) and the CCC boys helped build much of the park’s infrastructure. 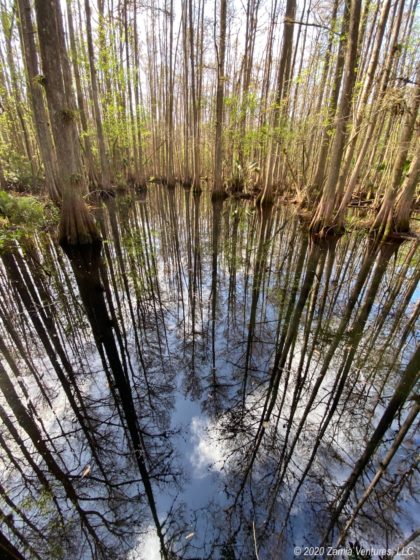 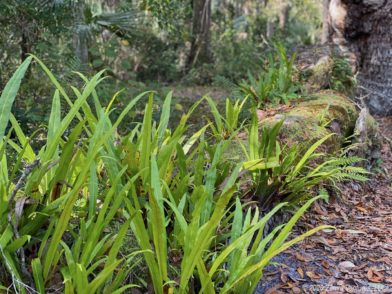 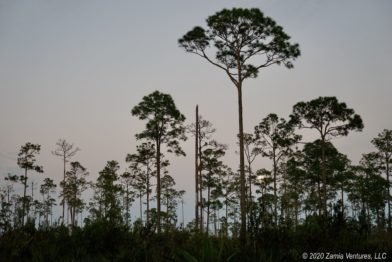 Moonrise over the palmettos

The main feature of the park is a three-mile loop road that winds underneath a canopy of fern-draped oak trees and cabbage palms, with a half dozen small trails leading off the main loop. The loop road has a designated bike trail that was perfect for our walks; most visitors seem to travel the loop either by bike or on foot. The side trails include several boardwalks through and over cypress swamps as well as upland hammock areas anchored by ancient oak trees. The one thing that makes the hammock less than pristine is regular sightings of free range citrus — orange and grapefruit trees that presumably grew from seeds transported from nearby citrus groves by birds or mammals. The feral oranges looked ripe, and the bright orange globes really stood out along the shady trails, but sadly the fruits were too high for us to snag and sample. 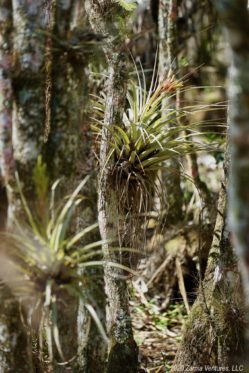 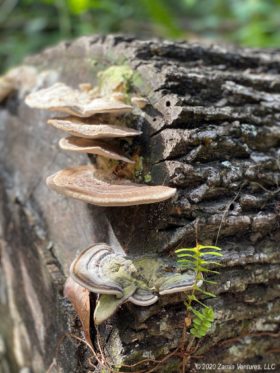 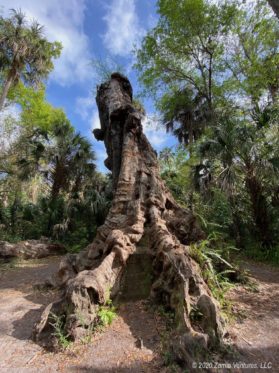 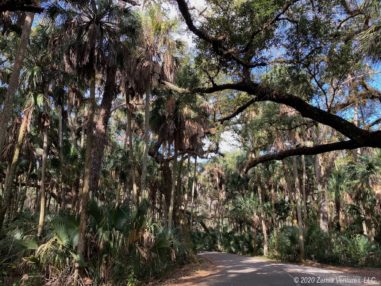 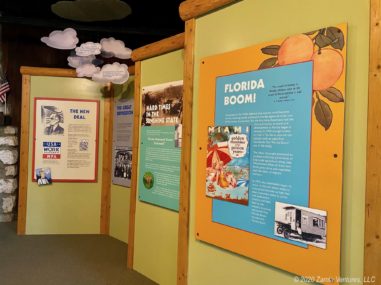 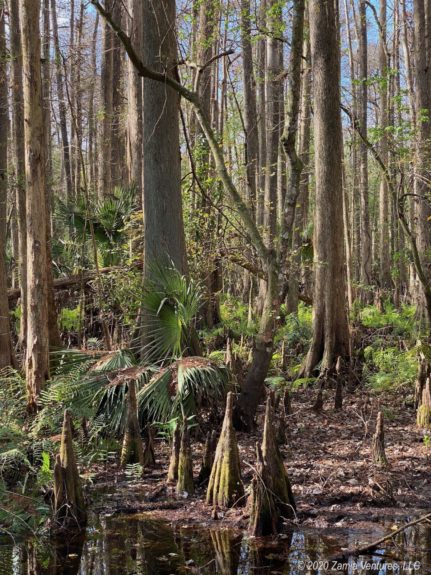 The park also has a small but free and well-done museum devoted to the work of the CCC in Florida. The museum nicely details the context of the Great Depression in Florida, which began early thanks to a land bust in 1925 followed by a devastating hurricane in 1926. As part of the New Deal, the CCC put thousands of young men to work building parks across the country and sent most of their wages home to their families. In addition to showing quite a few artifacts from CCC life, the museum profiles the work of the CCC at each of the eight current Florida state parks that were built by the CCC. The most interesting fact I learned was that many of the young men who enrolled in the CCC went on to enlist in the military when the US entered World War II, and those CCC veterans were fast-tracked into leadership positions in the military because of their experience living in barracks, working on set schedules, eating in mess halls, and otherwise living a military-like lifestyle.

Unfortunately, despite the fine work of the CCC boys, this park has one of the worst campgrounds we have experienced in a state park, with sites placed extremely close together and people parked every which way in sites that have no clear boundaries. Thanks to our obsessive research and preparation — OK, we mainly just read the reviews on Campendium and look at satellite maps — we knew that the only sites we would enjoy were the pull-through sites on the outer loop. Happily, when we made our reservations 11 months ago we snagged one of those desirable outer pull-throughs, so we had nice views across an open palmetto vista and our neighbors were not sitting in our laps. Our end unit in site #114 even gave us relief from neighbors on one side. Plus, there were plenty of functioning bathhouses, which we enjoyed immensely. 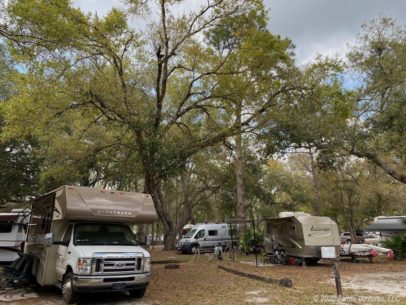 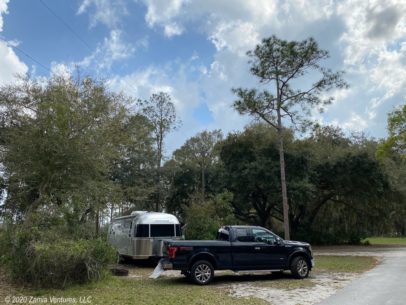 Next: we head to the east coast for a long stay in the Jupiter area, starting at our home park of Jonathan Dickinson State Park.