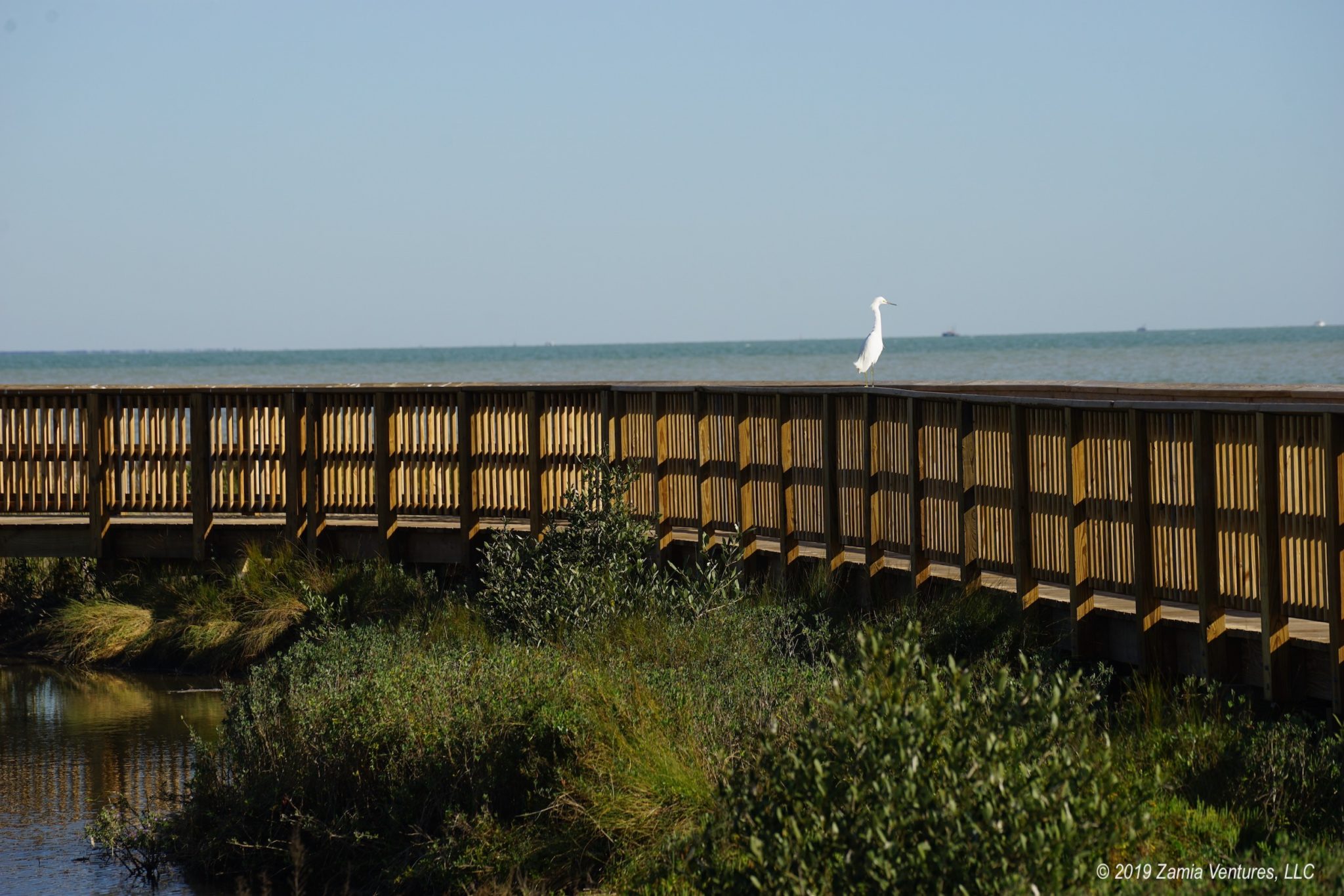 After leaving Padre Island our journey north along the coast presented a few routing choices, mainly because watery areas like barrier islands and coastal marshes tend to have limited roads and bridges. The Texas Department of Transportation operates two ferries as part of the state road system, one crossing Aransas Pass at the north end of Mustang Island (the barrier island immediately north of Padre Island) and the other crossing from Galveston to the Bolivar Peninsula. The ferries are free and operate 24 hours per day. We knew the Aransas ferry would be no problem since we took the Airstream on a ferry on our very first day of towing it home after our purchase, and we chose to go the ferry route to avoid driving back through a big highway construction zone in central Corpus Christi. Our wait for the ferry was about 15 minutes and the extremely short water crossing (under a quarter mile) was brief and uneventful, so we barely had time to grab a few photos. 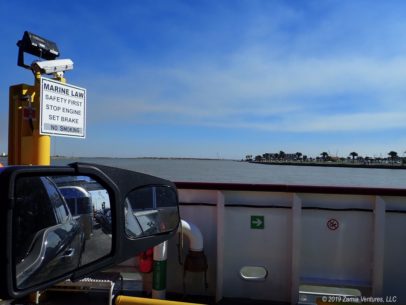 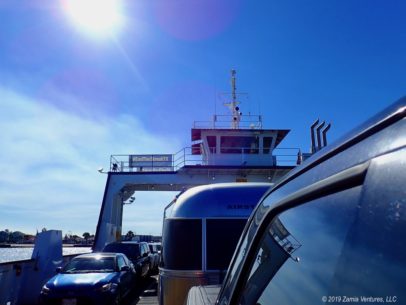 On board the ferry

Taking the direct route, including the ferry ride, made our relocation a very easy 50 miles, and we soon arrived at our next destination: Goose Island State Park. The park is located on the tip of a peninsula on the Texas mainland, not on a barrier island, but the bay to the southeast of the park is so wide that the barrier island is almost impossible to see. The closest town to the state park is Rockport, which has the unfortunate distinction of being the spot where Hurricane Harvey made landfall as a category 4 storm in the fall of 2017. Being a lifelong Floridian with a penchant for both science and disaster porn, you can bet I am fascinated by hurricanes. The extremely flat and low-lying land of the Texas Gulf Coast is, unfortunately, a perfect location for hurricane destruction because the shape of the coast and the shallow Gulf simply funnel storm surge forward with the storm, and in hurricanes the storm surge is usually more damaging than high winds. Pro tip: stay on Florida’s Atlantic coast during hurricane season, since storm surge is less of a risk thanks to the depth of the ocean and the shape of the coast. This allows much (though not necessarily all) of the wind-blown water to escape to the north or south instead of being pushed up onto the land.

Two years after the storm, the park is still showing the effects. The camping spots located along the bay front are all closed, since the seawater inundation ruined all the utilities and they had to be pulled out and completely replaced. The sites should be reopening next fall, three years after the damage. On the landward side of the park, where we stayed, what used to be a massive canopy of oak trees was thinned out considerably. A ranger told us the park lost 40% of its trees in the storm, and the remaining trees have a lot of distorted shapes. I can’t imagine how long it must have taken to clean up all the debris from the storm. But we still loved the trees surrounding our site and the dense foliage between sites. Even with all the evident damage, this was still one of our greenest and most private campsites yet. 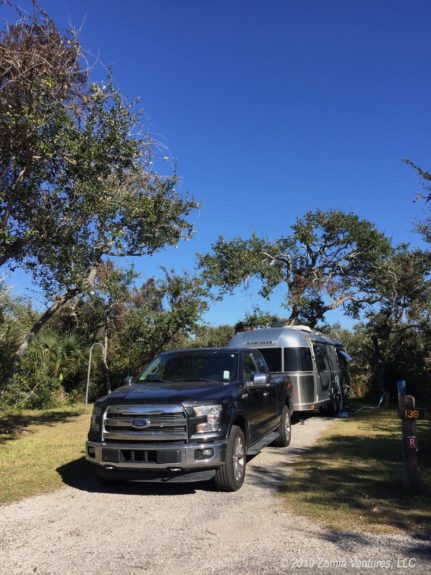 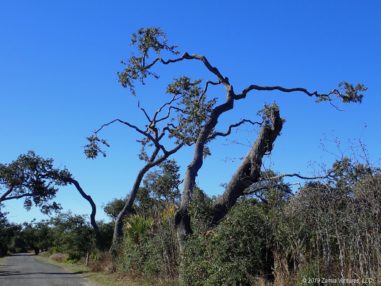 This swampy part of the Texas coast is a birdwatcher’s dream: the upland oak forests make a perfect home for arboreal songbirds, the marshes are ideal for wading birds, and coastal birds can enjoy the bounty of the sea and the bay. Even though the park is very small and close to a bunch of housing developments, we enjoyed strolling around the park and hearing songbirds, seeing wading birds everywhere in the marshes, and watching well-behaved pelicans lining up for handouts at the boat ramp. 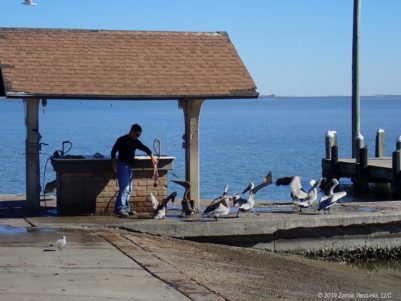 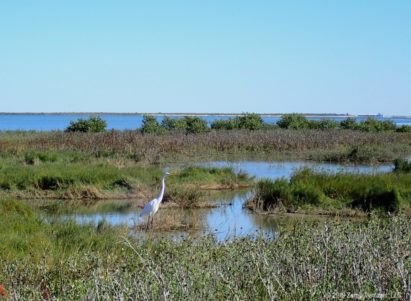 One of the park’s claims to fame is the Big Tree, a gnarled, thousand year old specimen with a 35-foot trunk circumference which was the state champion live oak from 1966 until an even larger live oak was found in 2003 in a wildlife refuge located 100 miles up the coast. Even though it is not the largest live oak tree in Texas, still enjoyed admiring the ancient specimen and thinking of all it has seen. The Big Tree lost all its leaves and many smaller branches in the storm, but no major limbs, and it is recovering nicely.

This part of the Texas coast is the wintering spot for critically endangered whooping cranes, who spend their summers 3,000 miles north in Canada’s Alberta and Northwest Territories. Although there are fewer than 1,000 individuals still existing in the wild, we had high hopes of seeing them here in their winter home. Our main destination for birding was the nearby Aransas National Wildlife Refuge. By “nearby” I mean that we could actually see the refuge from the shore at Goose Island State Park, but because it is on the next peninsula to the north, we had a 35+ mile drive to get to the entrance.

The day of our visit was fairly cold, with temperatures in the 50s, and the near-freezing overnight temperatures had the marvelous effect of killing off all the mosquitoes. I would imagine that visiting this marshy spot on warmer days would required gallons of bug repellent just to stay sane. Our tour of the refuge included driving down to an observation tower at the south end of the main drive looking out over the bay and marshes, wandering along several boardwalks, taking a 9-mile winding scenic drive through the more upland center of the refuge, and hiking the short Heron Flats trail. 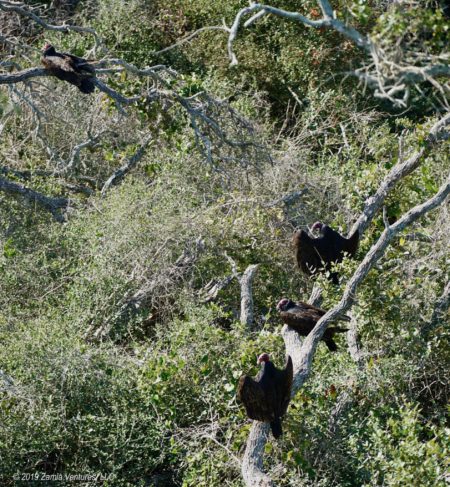 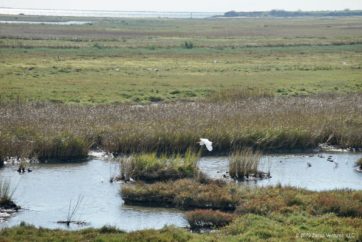 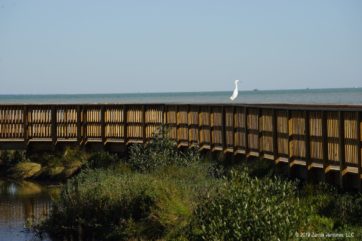 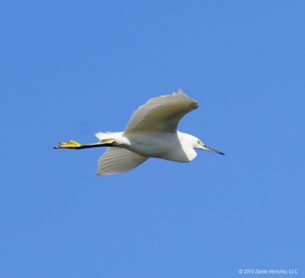 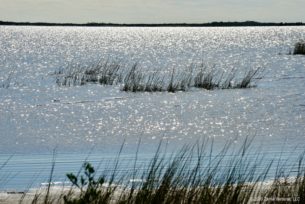 Shallow waters of the bay 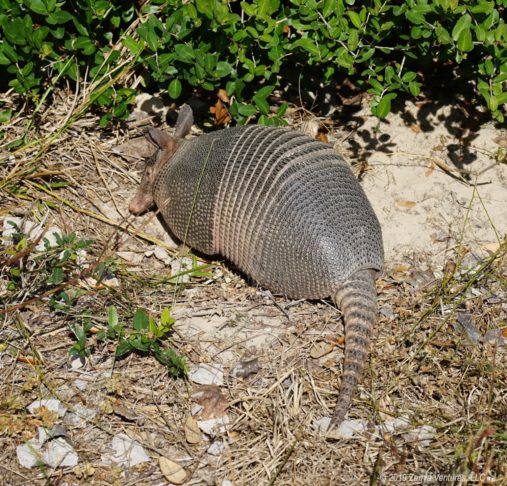 Our main goal was to see whooping cranes in one of the marshlands. The cranes are extremely large birds, standing 5 feet high, and they have fairly distinctive white and black markings. We had a near-miss seeing some large white birds flying into the distance, with black tips on their wings, but closer examination of my photos revealed them to be white pelicans. Darn! But our persistence paid off, and we eventually saw a pair of cranes in two different areas (could be the same ones or two different pairs). They were off in the distance, but their distinctive coloring combined with their enormous size confirmed the sightings for us. For those who don’t want to make the drive to the wildlife refuge, there is an easier way. There are often cranes around the cow pasture that’s across the street from the Big Tree, just a mile from the campground at Goose Island State Park. We saw a few cranes, but they were even further away than at the wildlife refuge. 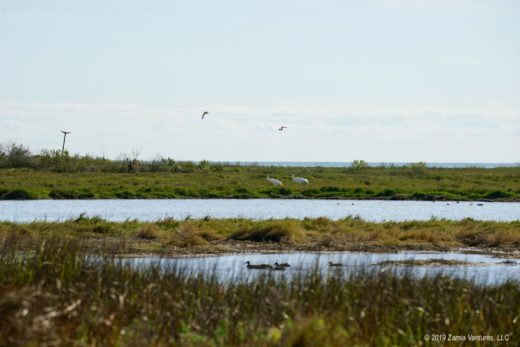 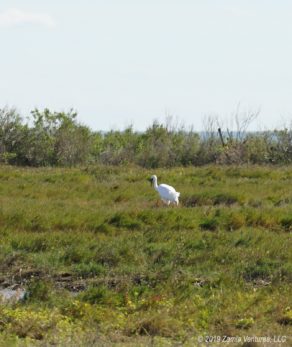 One of the closest cranes at wildlife refuge 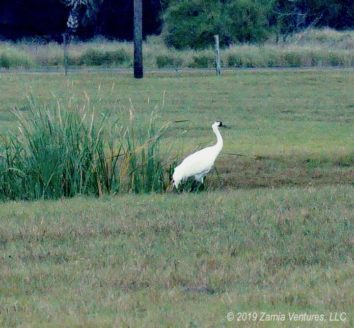 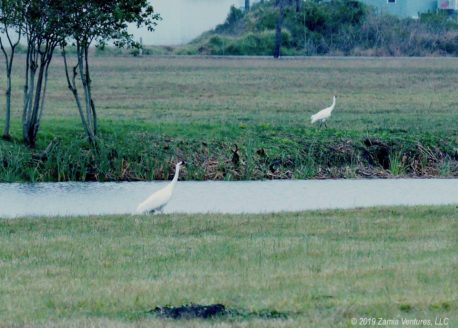 Even though the cranes proved to be a bit elusive, there was no shortage of other fauna to be appreciated. The brackish ponds were home to large numbers of ducks and coots. In the marshes we saw tons of egrets, great blue herons, and tricolored herons, along with a handful of roseate spoonbills and white pelicans. The trees near the observations towers were absolutely packed with several dozen vultures. On the scenic drive we spotted several armadillos, a crested caracara, and numerous small birds that darted into the high grasses much faster than we could ID them. And every place we went in the park we encountered deer: wandering on the beaches, ambling down the roadside, making their way across the grasslands, standing on the banks of the ponds, and passing by the boardwalks. 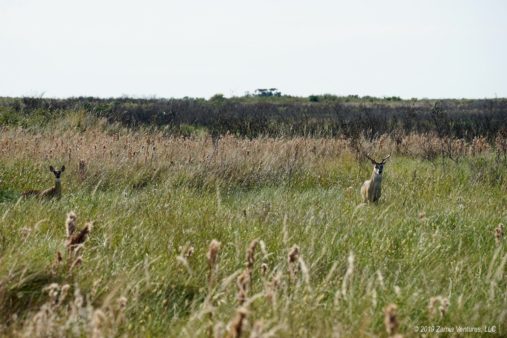 Deer in the upland grasslands 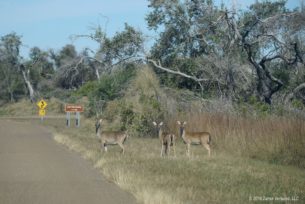 Deer near the boardwalk at the observation tower

It was a little disappointing that the cranes were so distant, but it was cool to see them at all. They remind me of a cross between wood storks and sandhill cranes — tall and graceful like sandhills, with the approximate coloring of wood storks. Since I didn’t get any particularly good shots of the whooping cranes, you’ll have to use your imagination and to assist you here are some photos of wood storks and sandhill cranes I took years ago in Florida. You’re welcome. 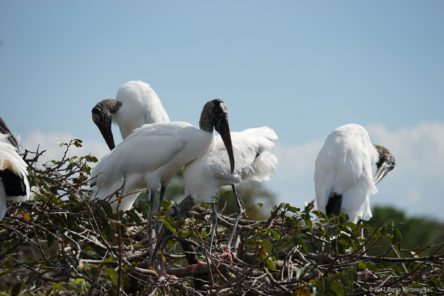 Next: we head up to the Houston area to celebrate Christmas and enjoy our last stop in Texas.