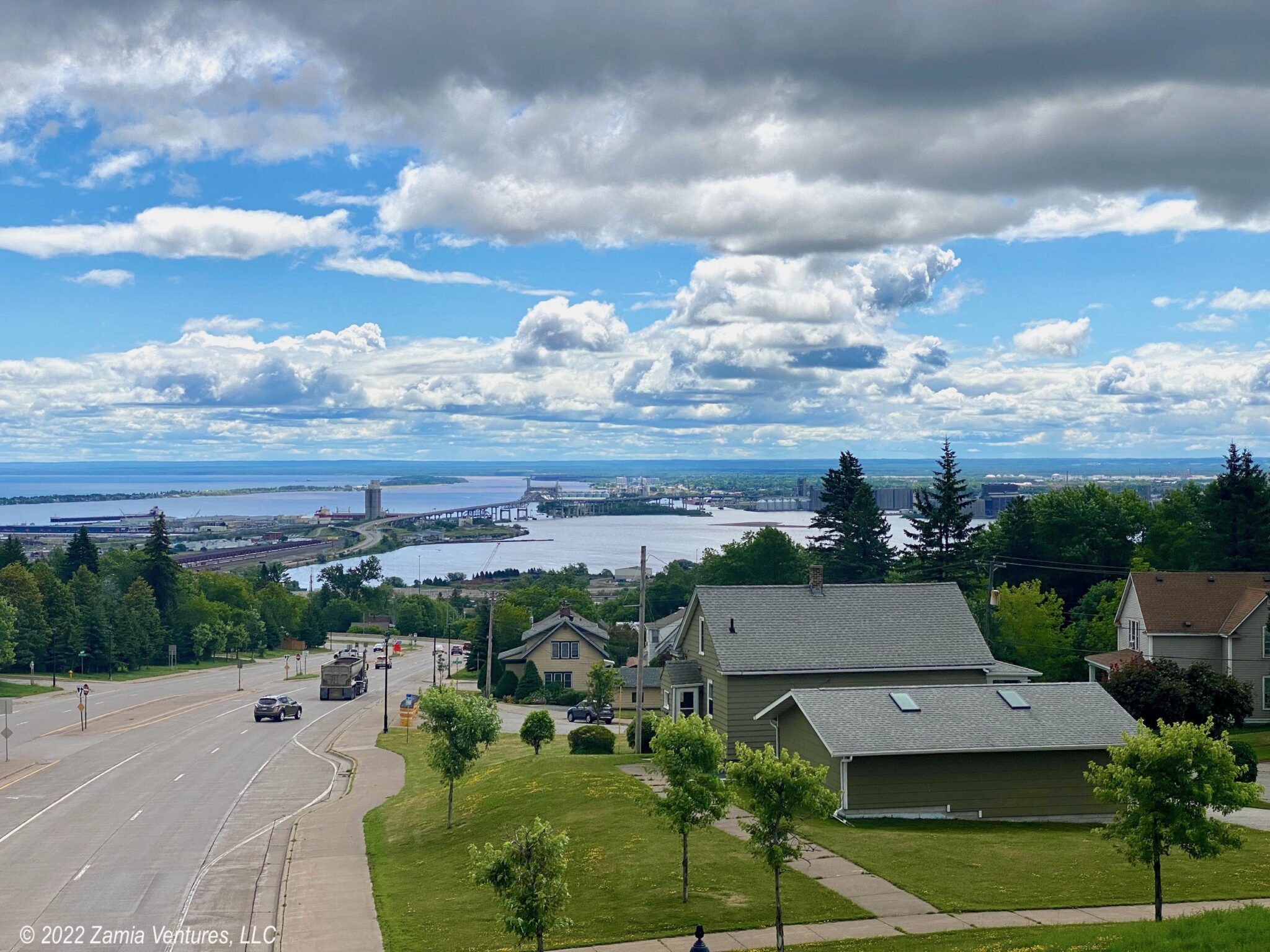 We arrived in Duluth on a cloudy Friday after a long (350 mile) relocation from Green Bay. Our introduction to the twin ports of Superior, Wisconsin and Duluth, Minnesota involved rolling through poorly maintained streets lined with tired 19th century brick buildings, past mountains of ore and graffiti-covered rail cars, alongside towering industrial port facilities, all under grim leaden skies. We arrived at our campground (Indian Point) to find that it was disorganized and densely packed, with RVs, cars, tents, and various canopies jammed together and our neighbors located just inches outside our windows. 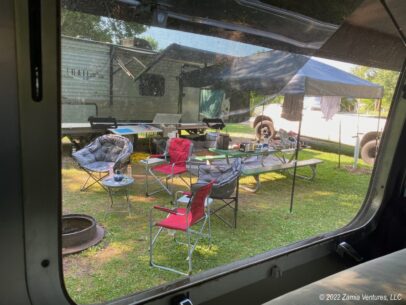 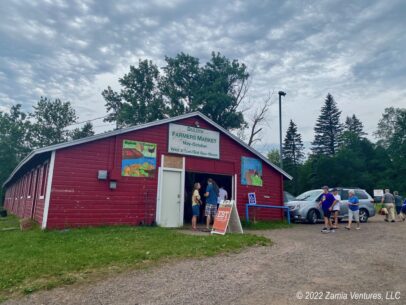 The next day was rainy, we were grumpy about our campground, and the Saturday farmers market was disappointingly puny. Things were looking pretty bleak. But then a minor miracle occurred: the sun came out.

On our first nice day we headed to the downtown Duluth waterfront to check out the Canal Park area. But before I show you photos, let’s start with a bit of geography and history. On the southwestern corner of Lake Superior a little waterway called the St. Louis River empties into the lake, with a natural harbor separated from the main lake by a naturally occurring spit of sandbar called Minnesota Point. The river serves as the dividing line between Wisconsin and Minnesota, and originally the only entry point into this harbor was located at today’s Superior harbor entrance. The silt from the slow-moving river made for a very shallow and treacherous route from the natural opening to the docks on the mainland in Superior and Duluth. Through a combination of nefarious late-night activities (the unpermitted digging of the Duluth harbor entrance) and legitimate lobbying, the people of Duluth and Superior have jointly developed one of the busiest American ports. The twin ports handle upwards of 30 million tons of cargo every year, primarily iron ore, coal, lignite, and limestone. The lake and specifically the port are the historic beating heart of the area, and in traveling around town it’s impossible to avoid seeing the massive bridges, silos, ore docks, rail yards, and other working components of the port. Fortunately for us, that’s not all that exists in the area. 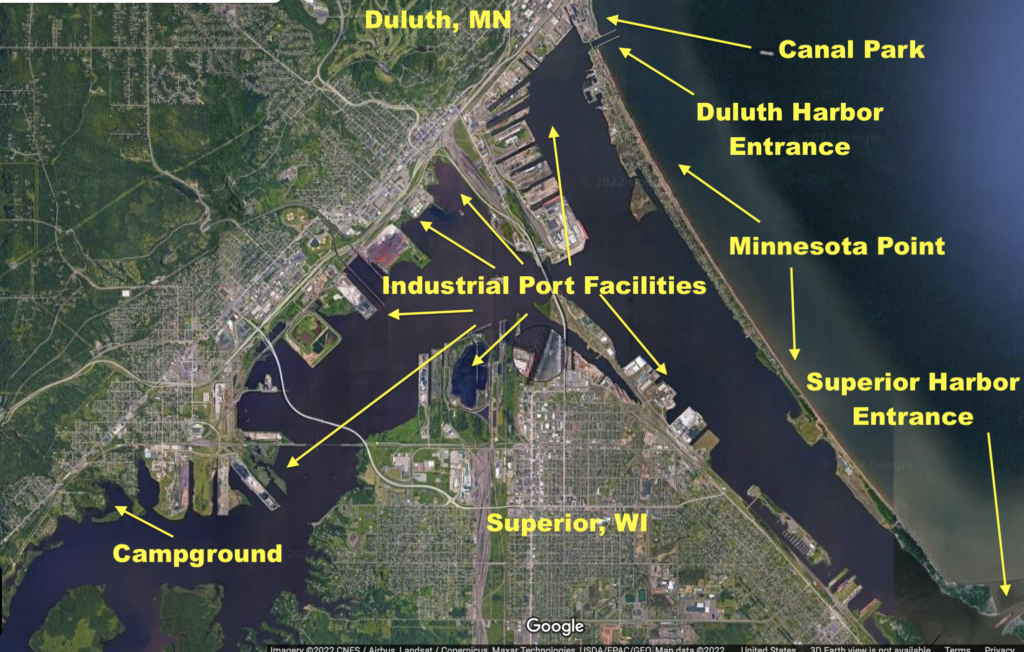 So, back to our day at Canal Park. This little stretch of land is directly across from downtown Duluth and was originally the base of Minnesota Point, before digging the Duluth harbor entrance turned Minnesota Point into an island. The 19th century industrial facilities in this stretch of waterfront have been transformed into a popular tourism destination, full of hotels with sweeping lake views, restaurants, shops, and more. The entire point is surrounded by a broad promenade that makes it easy for people to enjoy the water, the lighthouses, and other iconic pieces of industrial engineering. The most recognizable item is the Aerial Lift Bridge that spans the artificial opening of the Duluth Harbor Entrance. It’s all well and good to dig an illegal channel in the dark of the night, but then how do you get to the other side? This 1905 span started life as the framework for a passenger gondola, but today the bridge supports a ground-level vehicular roadway that is lifted vertically every time a boat enters the harbor. The roadway weighs 1,000 pounds, but two 500-pound counterweights make lifting it a fairly simple mechanical matter. The unbridled excitement around the opening of the bridge is evident in the electronic displays all around the bridge area listing the anticipated transit times of scheduled ships. Who knew that watching an iron ore freighter float by was appointment viewing? 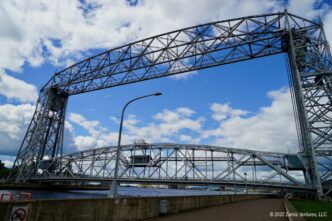 One lighthouse at Duluth Harbor 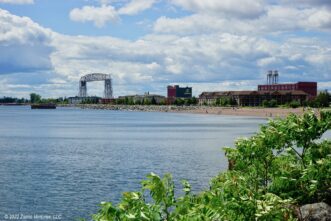 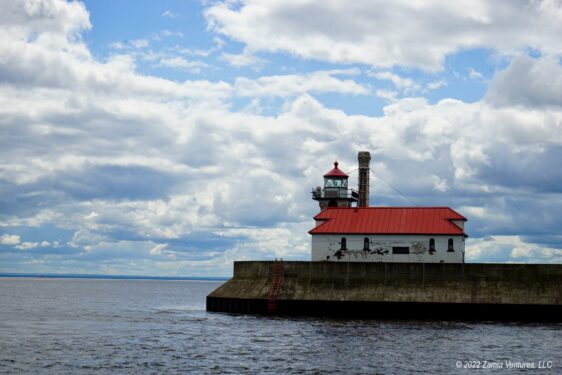 Another lighthouse at Duluth Harbor 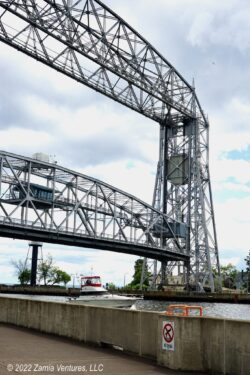 As a fan of wonky museums, one spot I really enjoyed in Canal Park is the Lake Superior Maritime Visitor Center. This free museum is operated by the Army Corps of Engineers (ACOE) and focuses on the history of the Great Lakes shipping industry. The displays range from full size replicas of seaman’s cabins to scale models of various types of watercraft that have plied the lakes over the years. We learned about the process of digging and maintaining the twin ports, the mechanics involved in loading 30+ million tons of freight onto boats, and of course some of the famous shipwrecks of the lakes (cue Gordon Lightfoot singing The Wreck of the Edmund Fitzgerald).

My favorite part of the museum was the section detailing the history of the ACOE. The first mission of the Army Corps was classic military engineering: fortifying Bunker Hill. The Army established the nation’s first engineering school at a little base called West Point, and Army engineers were instrumental in surveying and mapping during the nation’s westward expansion. The ACOE played a critical role in the Civil War, especially building roads and bridges. They were particularly skilled at this function because throughout the 19th century the ACOE had been assigned more and more civil engineering tasks: mapping the Great Lakes, building and improving harbors, designing and operating lighthouses, designing and building the nation’s bridges, and more. The portfolio expanded even further in the 20th century. A few prominent ACOE projects that you may have heard of: the Panama Canal, the massive Bonneville Project in the Columbia River Gorge, flood control on the Mississippi River, the Manhattan Project, and manned launch facilities at Kennedy Space Center. Because of the wide range of military and civilian projects it undertakes, the ACOE is probably the part of the Defense Department that American civilians are most likely to encounter.

After exploring Canal Park, we wandered north along the Lakewalk. This outstanding public amenity is a multiuse path that runs several miles along the waterfront from downtown and through several lakeside parks. The lakefront buildings have been refurbished and turned into appealing restaurants, inns, and homes. The Lakewalk was well used on a lovely day; people zipped by us on bikes and e-scooters, ran by with dogs, and strolled on foot. Our destination was Leif Erikson Park, about a mile east of Canal Park, where the city has a lovely public rose garden. In a welcome example of urban planning gone right, when I-35 was constructed through Duluth in the 1980s the local planners were able to convince the Department of Transportation to put portions of it in tunnels along the lakefront, preserving historic buildings along with the city’s lakeside parks and water access. That wise decision is still paying dividends decades later. 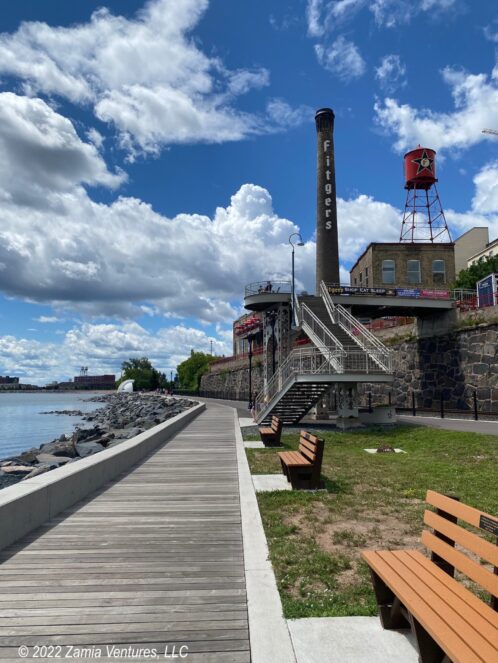 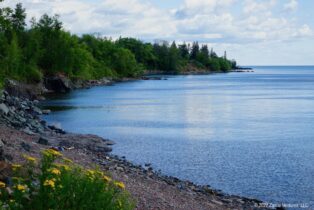 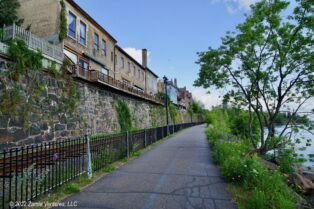 Homes along the Lakewalk 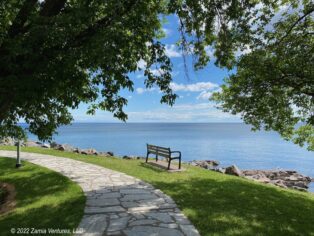 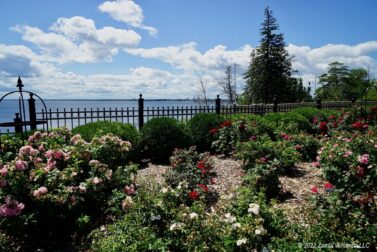 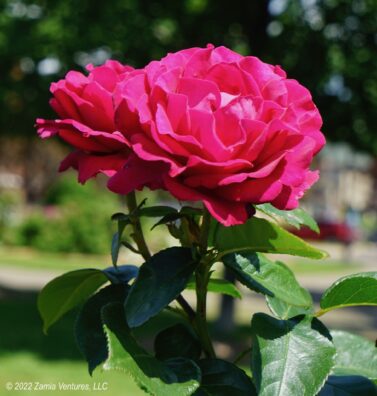 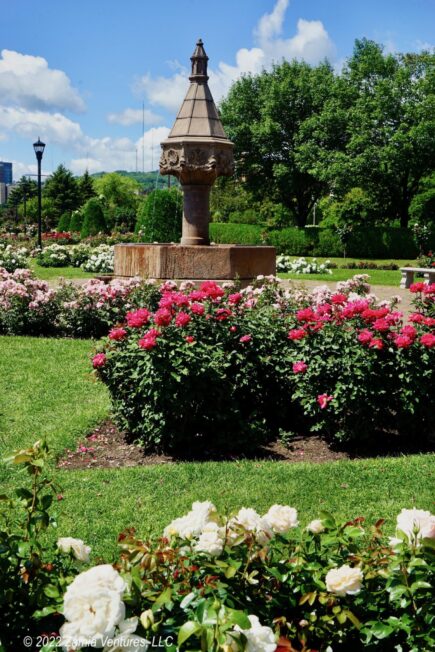 We knew we wanted to make at least one visit to the highly touted North Shore of Lake Superior. On a gloriously clear, sunny day we headed up to Gooseberry Falls State Park which is about 40 miles up the coast northeast of Duluth. Our ride north along Scenic Highway 61 offered spectacular views of the shimmering lake complemented by stately white birch and pine trees and cheerful roadside wildflowers. At the park we combined the Gitchi Gummi Trail and several segments of the Fifth Falls Trail, which gave us the best of all possible worlds. We took in panoramic views of the lake, we hiked through different forest environments, we saw the river and several different waterfalls, we appreciated some historic CCC-built facilities, and we even had the chance to examine an interesting bridge. Those red hues in the rocks give a hint of the iron-rich ores that are prevalent throughout the area. As usual, once we got more than about 5 minutes’ walk away from the visitor center the crowds dwindled to the point where we had the trails mostly to ourselves. On the way back we stopped in the historic port town of Two Harbors to visit the Castle Danger taproom and share a flight on the comfortable outdoor patio. What an idyllic day! Did I mention it was 72 degrees and sunny? 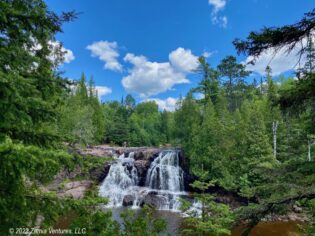 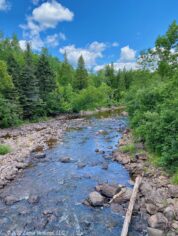 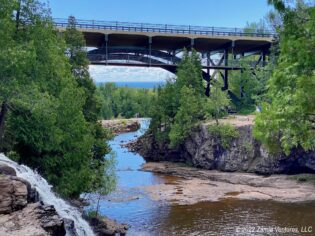 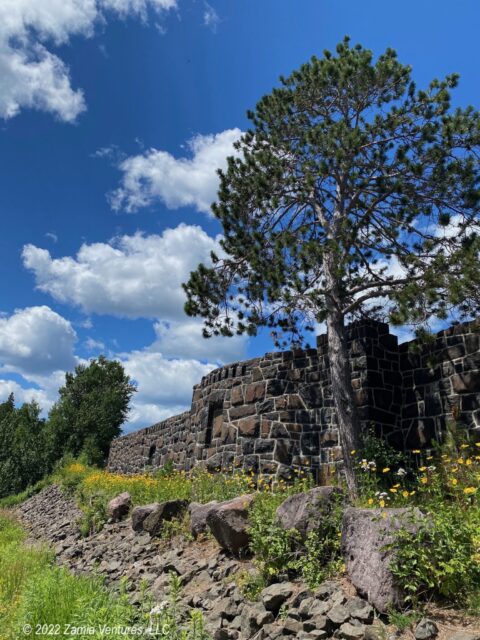 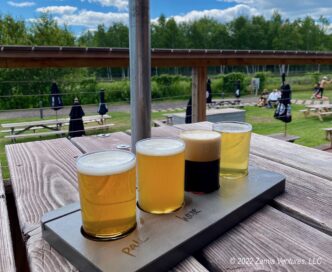 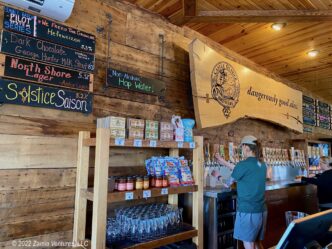 One important benefit of reaching Lake Superior is that we have entered territory that our friends over at Chasing Dirt explored when they spent a summer volunteering at the Northern Great Lakes Visitor Center. We took our cues from them and while in the Superior area we headed to nearby Pattison State Park for more hiking and waterfall viewing. As we expected from their scouting, we enjoyed seeing Big Manitou Falls, the highest waterfall in Wisconsin at 165 feet, but the real treat was the longer trail through the park to Little Manitou Falls. Seeing the peaceful campground and cool CCC-built amenities made us a little regretful that we didn’t choose to camp at the state park. 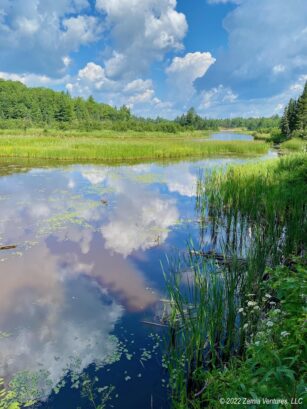 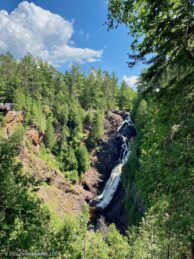 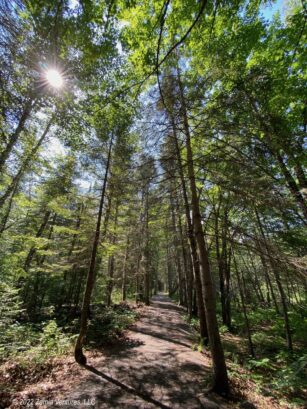 We are members and volunteers at the Apalachicola National Estuarine Research Reserve; that’s the research center where we do sea turtle conservation work as well as microplastics testing. So naturally when I saw that the Lake Superior National Estuarine Research Reserve has a visitor center in Superior, WI, I knew we needed to drop by. Always one to make trouble, I immediately pounced on the poor guy at the desk to ask how this area qualified as an estuary since that term is used in our area to mean “where the fresh water meets the sea.” He patiently explained that the chemistry of the St. Louis River and Lake Superior are so different that the bay counts as an estuary; the warmer, nutrient-rich river water is mixing with the cold, clear, nutrient-free water of the lake. The visitor center told the story of the how the St. Louis River had become so polluted during the 19th and 20th centuries that it was considered dead — the term “floating sewage” was used — but is well on its way to being reclaimed thanks to tireless efforts by nonprofits, native nations, and governmental entities. It should be delisted as an “area of concern” by 2025, and the river is now pretty healthy, including supporting a population of indigenous wild rice. The story of redemption told at the Estuarium is overall a positive one, even though this NERR is also undertaking a microplastics study and — of course — finding lots of plastic in the local waterways.

Heartened by the good news about the river, we were better able to appreciate the environment surrounding our campground. It sits right on the western bank of the St. Louis River, and there is direct access from the campground to one of the many trails that lace throughout the Duluth area. The Waabizheshikana Trail (f/k/a the Western Waterfront) is an easy stroll that gave us the chance to see geese, ducks, and even an otter enjoying the restored St. Louis River. On a different day we explored one of Duluth’s many urban parks, starting off in a residential neighborhood and ending up along the Superior Hiking Trail with elevated views over the harbor area. Our route was similar to this one. 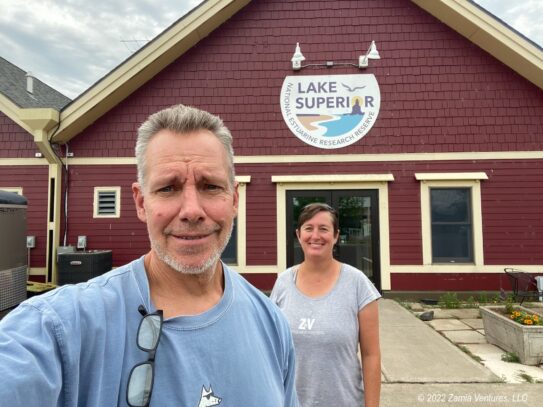 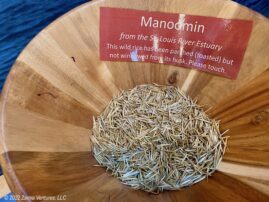 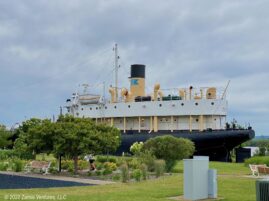 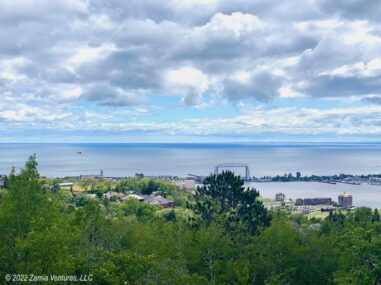 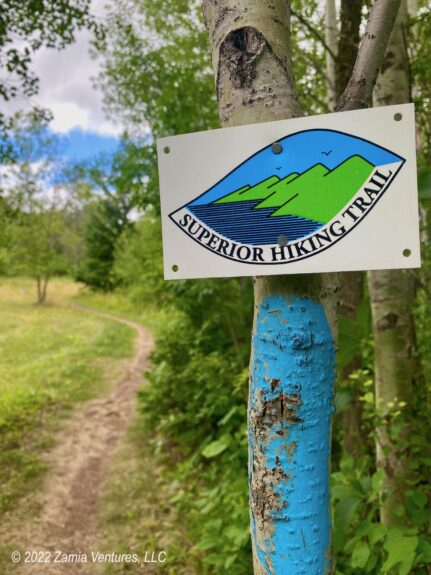 We also made several trips to Menard’s (a favorite since our first emergency on the road and once again they came through with supplies for a necessary repair), stocked up at Costco, and enjoyed a local take-out pizza topped with fabulous sausage. Despite the inauspicious start, we ended up discovering plenty of things to like about Duluth. This is our westernmost point in our 2022 summer travels, so now we point the rig east to work our way toward the Upper Peninsula of Michigan.

Next: a stop in Bayfield, WI to visit the Apostle Islands.

10 thoughts on “Dismal and Delightful Duluth”